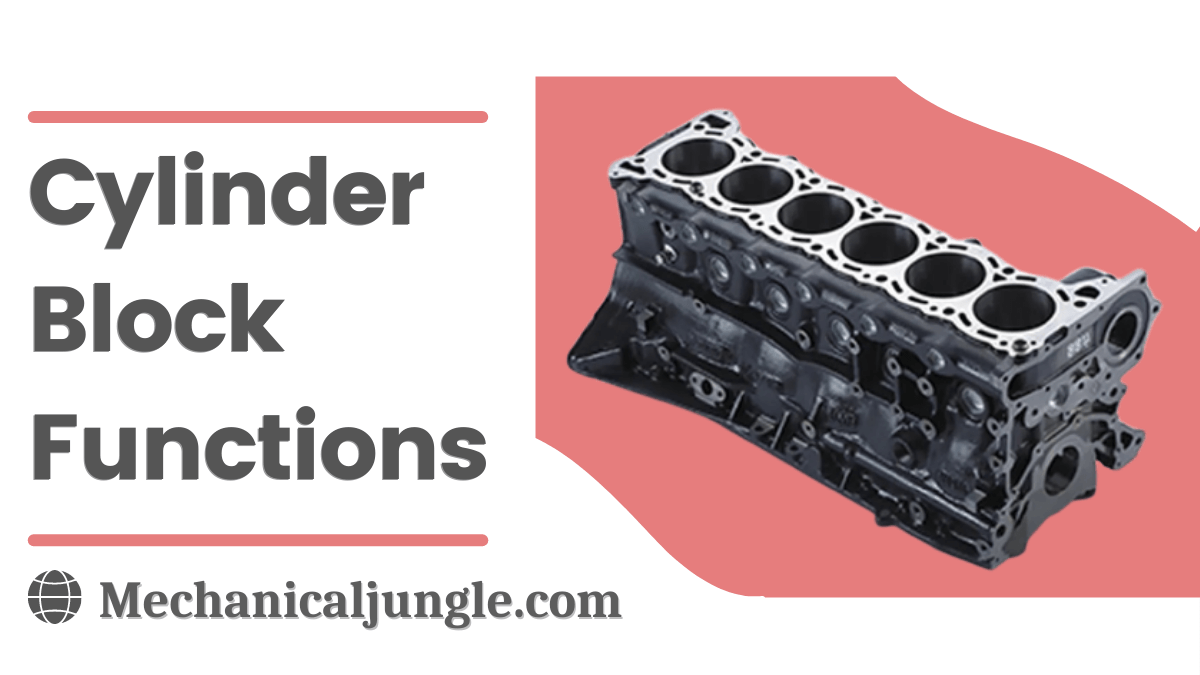 What Is Cylinder Block? 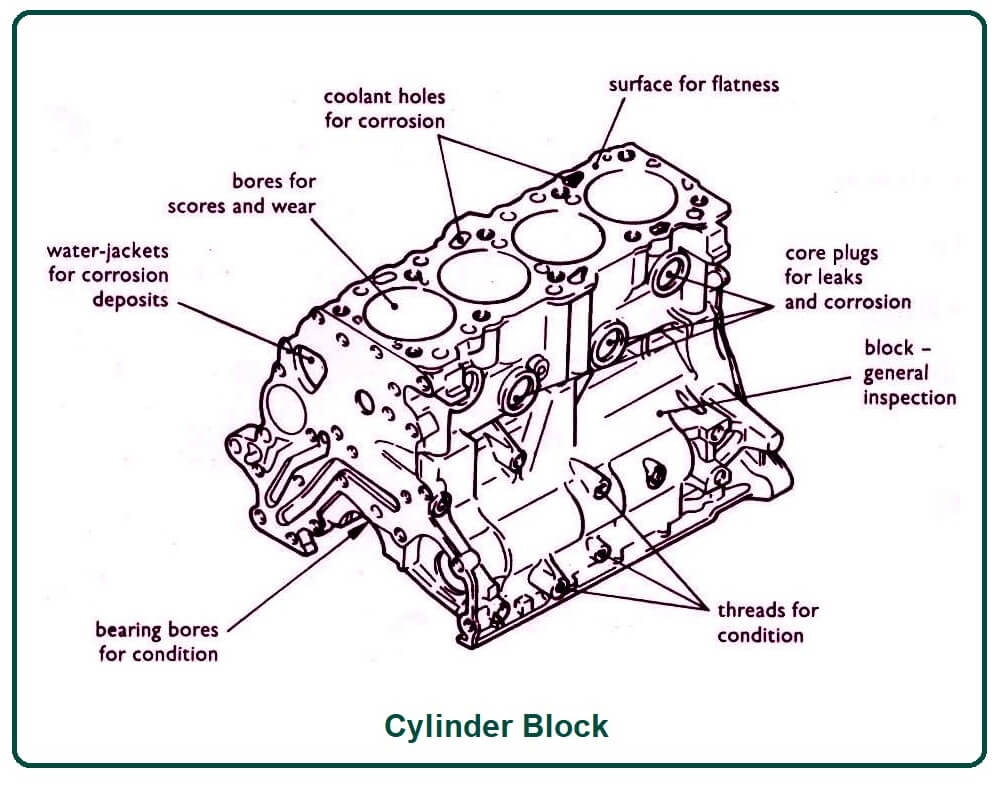 Cylinder blocks are a fixed, integral part of the crank mechanism hereinafter referred to as the KM, which connects the engine cylinders. It is made by casting from cast iron. Sometimes the cylinder block is cast from cast aluminum as well as magnesium alloys. In the cylinder block, the crankshaft is mounted on special supporting surfaces.

The cylinder wall is the machine to provide a very smooths finish. Special grinding stones make small grooves in the cylinder walls, which collect oil. These grooves help lubricate the piston rings and piston skirt. Previously, most cylinders block were made of cast iron or gray iron as the material was easier for the machine.

Aluminum pistons wear very well against cast-iron cylinder walls. The main disadvantage of being iron is its weight, with the engine blocks now being casts from lightweight aluminum. Aluminum blocks weigh much less than a cast-iron block. An aluminum piston skins rubbing against an aluminum cylinder wall wear out very quickly. Most aluminum cylinder blocks are equipped with steel, or ductile iron cylinder bore liners.

Materials of Cylinder Block and Liner:

Typically, manufacturers sometimes use gray cast iron for cylinder blocks when nickel and chromium are added. Nowadays, they also use aluminum to reduce weight and improve performance. However, aluminum blocks use cast iron or steel sleeves on the cylinder. Most engines prefer cast iron for the cylinder walls as it has fewer wear properties.

Some small engines use chromium for plating the cylinder walls to reduce wear and increase service life. Depending on the working volume & other technical and operational characteristics of the purpose, there are several layout options for the arrangement of the engine cylinders, as well as a number of materials for the manufacture of blocks and cylinders. Since different pressure conditions arise in the cylinder above the piston cavity, the inner surface of the cylinder wall is exposed to flame and hot gases, the temperature of which ranges from 1500-2500 °C; such a part must be high Made of high strength material with mechanical strength.

The structure of the cast-iron cylinder block is as follows:

A typical aluminum alloy for the cylinder block and piston is specified below:

The bottom of the block also supports the crankshaft and oil pan. In most engines, blocks also support camshafts by means of bushings that fit into the machined holes. In some engines, the intake & exhaust manifolds are attached to the sides of the block. Other parts fitted to the blocks include the water pump, timing gear at the front and flywheel, clutch housing (both at the rear. These also include ignition, distributor, and fuel pump.

The cylinder block is the main stationary body of an automobile engine and serves as the foundation. They serve as support and enclosure for the moving parts. Nowadays, the cylinder block and crankcase are cast together in a single casting, which gives a rigid structure.

The cylinder blocks may also have a separate crankcase for the crankshaft, which is mainly limited to larger engines and marine and stationary engines. A separate aluminum crankcase made of aluminum is preferred due to its low weight, cheap and quick replacement.

The main function of cylinder blocks is that it encloses the connecting rod, piston, and crankshaft. His personal work takes place inside the block. It supports other core components and accessories of automobile engines, such as the A/C compressor, alternator, intake and exhaust manifold, etc. It includes lubrication mechanism components such as an oil pan, oil pump, oil filter, etc. It also helps in the cooling circuit.

Types of Engine and Cylinder Block: 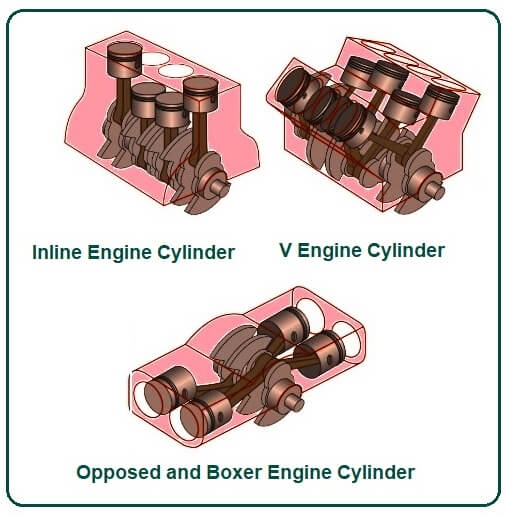 Engine blocks are classified based on the configuration of the engine cylinders. The following are the types of engine blocks:

This is the popular engine cylinder type and is widely used nowadays. In this configuration, the engines are arranged in two rows. The two lines are set at an angle to each other. The angles V is kept small, usually 15° to 20°, because the larger angle makes it more difficult to balance the engine. It is difficult to balance this type of engine with the counterweight on the crankshaft.

The crankshaft consists of only two cranks, in which the connecting rods from the opposing cylinders are connected to the same crankpin in two rows. Each of the two connecting rods is connected to a crankpin. There are different types of V engines; for heavy vehicles, V16s, V8s, and for small motorcycles, V4s are used as cylinder blocks.

The Boxer engine is basically a flat pressed V engine. These cylinder blocks consist of two rows of two cylinders, each facing each other. This design is also known as a pancake engine. This requires very little headroom so that the engine compartment can be very compact. The Volkswagen engines have this type of arrangement of 4 cylinders. It is air-cooled and is mounted at the rear of the car. This engine block is also used on Porsche and Subaru, and some other higher engines.

Inline engine cylinder block, a series of cylinders arranged in such a way that they run in a single line. Automobiles with this type of engine block work smoothly; This is the reason why they are mostly used where high rpm is required. It is mostly used in passenger cars.

External engine coolant leak:- This leak can be from the water pump, radiator, heater core, or a loose hose. Sometimes it can also be due to engine block due to cracks.

Worn/Cracked Cylinder:- After the cylinder has been in operation for a long time, wear inside the cylinder is a common phenomenon. This can damage the smooth machined wall. This affects the sealing by piston rings. These problems can be solved by increasing the bore size.

Porous Engine Block:- This engine block failure is usually caused by a contaminant entering the metal. This often happens during the manufacturing process. There is no solution to this problems because this problem is because the cylinder block originated from it.

The cylinder block is one of your engine’s central components. It plays a key role in the lubrication, temperature control, and stability of the engine and it has to be of the highest quality so there is no room for shortcuts.

What Is an Engine Block?

The engine block – also known as a cylinder block – contains all of the major components that make up the bottom end of a motor. This is where the crankshaft spins, and the pistons move up and down in the cylinder bores, fired by the fuel combusting.

Probably the most intuitive way to differentiate between them is the type of energy each engine uses for power.

The V type has two rows of cylinders, usually forming an angle of 60° or 90° between the two banks. V-8 engines (eight cylinders) are usually of the 90° type.