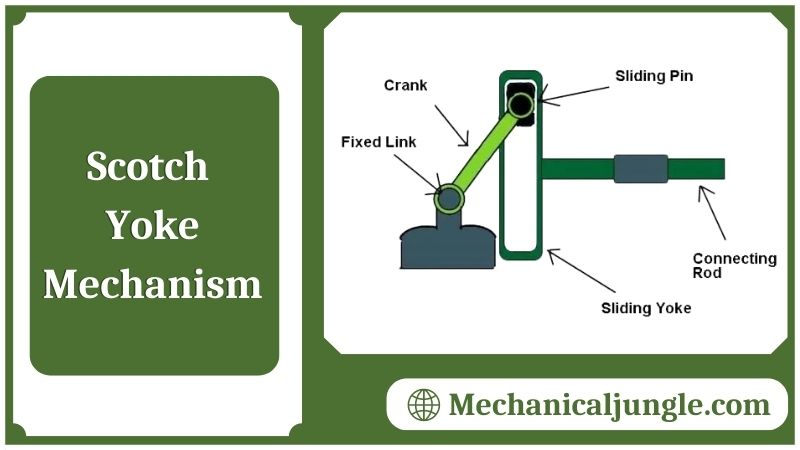 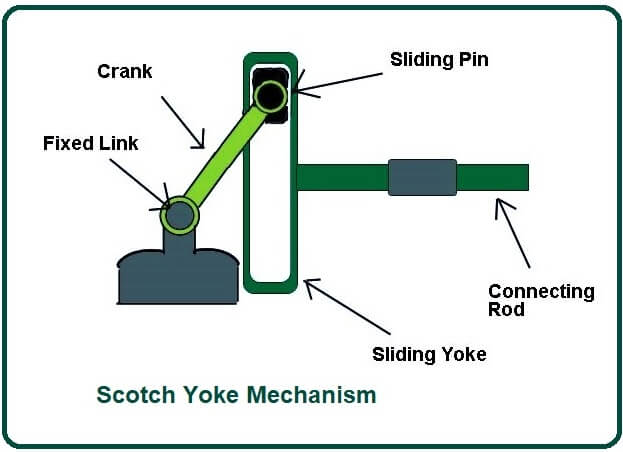 This is a simple mechanism; the rotary motion of the pin is converted to linear motion. Firstly, the power is supplied to the DC motor to be connected; when the shaft starts at the moment of rotation, now the crankpin rotates the slider inside the yoke part and also moves in the forward direction.

When the crank is rotated in a counterclockwise direction, the yoke will be in a forward-facing displacement moment. The maximum displacement of the yoke depends on the length of the crank.

The crank has completed the revolution of the clock at the same time as yoke sliding completely moved forward. When this position takes longer to initiate the return stork, after spending time, the crank will be rotated continuously to return to its initial state of rotation. Therefore the yoke moves in a backward direction and returns to the starting position.

The piston or reciprocating part is added to a sliding yoke. This sliding yoke has a slot that attaches a sliding pin that slides inside the sliding yoke, and the double slider is a non-fixed slider of the crankshaft.

This sliding pin is also attached to a crank which is a fixed link to the double slider crankshaft on the other side. This crank rotates around the fixed link as its center point and the sliding pin as its endpoint.

When the crank rotates around the fixed link, the sliding pin slides into the slot of the yoke, and the yoke slides forward and backward.

In the Scotch yoke mechanism, the rotary motions of the crank are converted to the linear motion of the alternating part. Power is supplied from the DC motor shafts, & the crank attached to the shaft rotates.

As the cranks rotate, the pin or the slider attached to the crank begins to slide into the yoke and also moves the yoke. When the pins of the crank are at the top & the crank rotates in the clockwise direction, the yolk will get displacement in the forward direction.

When the pneumatic actuator, which mechanism converts rotary motion into linear motion. The spring is to be attached to the piston because it will return to the initial position. That provides great torque, so it is used in some industrial valves.

The Scotch yoke mechanism is a reciprocating motion mechanism, converting the linear motion of a slider into the rotational motion of a crank or vice versa. In the present study, it has been considered that the gravitational forces are perpendicular to the motion plane.

The Scotch yoke mechanism is most commonly used in control valve actuators in high-pressure oil and gas pipelines, as well as in various internal combustion engines, such as the Bourke engine, SyTech engine, and many hot air engines and steam engines. This mechanism does not create lateral forces on the piston.

It is also used in testing machines to simulate vibrations having simple harmonic motion. 6 The Scotch yoke mechanism does not create lateral forces on the piston. Therefore, the main advantages of applications include reducing friction, vibration, and piston wear, as well as smaller engine dimensions.

The Scotch Yoke (also known as the slotted link mechanism) is a reciprocating motion mechanism, converting the linear motion of a slider into rotational motion or vice versa. The piston or other reciprocating part is directly coupled to a sliding yoke with a slot that engages a pin on the rotating part.