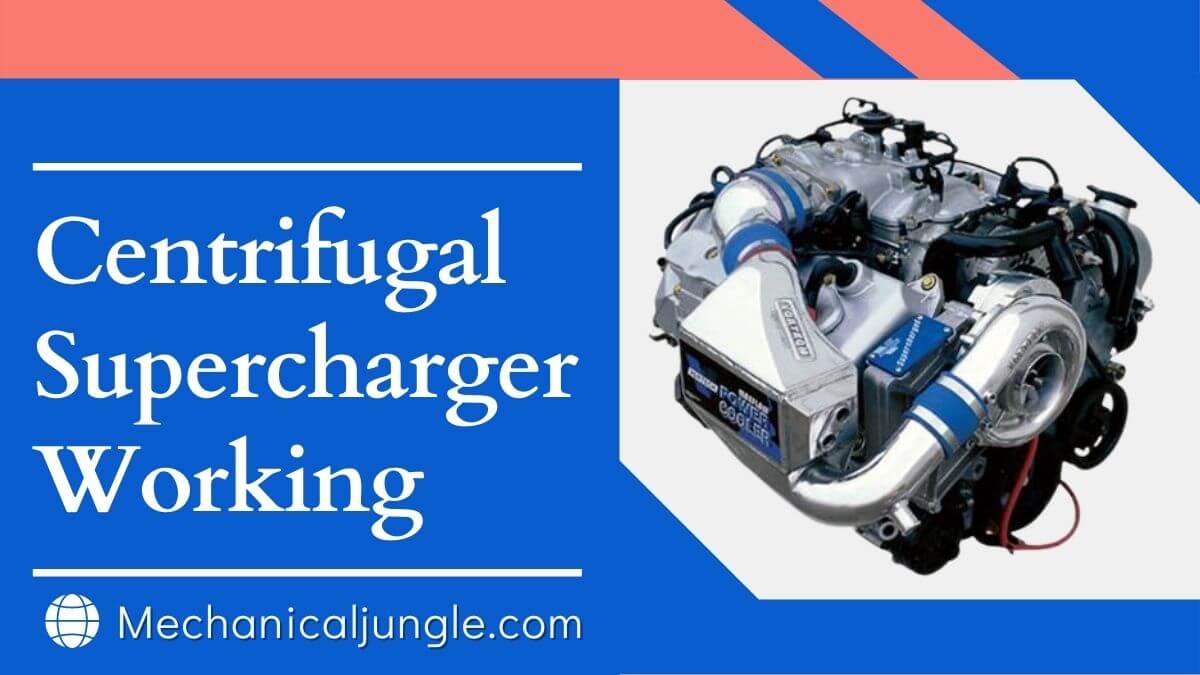 What Is Centrifugal Supercharger?

Centrifugal superchargers function in much the same way as turbochargers; however, they are powered by the engine rather than the exhaust. The impeller rotates as a result of an engine belt spinning a pulley that is attached to the supercharger transmission, which multiplies the gear ratio between the engine and the impeller, providing a greater boost at each engine rpm.

Horsepower can be added up to 40-80%. It is a magical device that is placed on or next to the engine. Boost can accelerate your vehicle from zero to three-digit speeds at the same time as the engine sounds like crazy bridesmaids. All due respect to this little device called the Centrifugal Supercharger. This provides greater air density for each intake cycle of the engine.

More air means more oxygen in the combustion chamber to burn more fuel. It is very valuable for boosting automobile vehicles and for the extra horsepower required for racing. A centrifugal supercharger is similar in appearance to a turbocharger, but it is driven by a belt drive or chain drive through the engine’s crankshaft while the turbocharger gets its power from exhaust gases.

It is more widely used than the positive displacement supercharger. A centrifugal supercharger resembles a turbocharger on the compressor side, and this is no coincidence. Like a turbo, it uses an impeller to compress the intake air and force it into the engine. But instead of using exhaust gases to get the impeller spinning, it uses a pulley attached to a belt-driven by the engine. 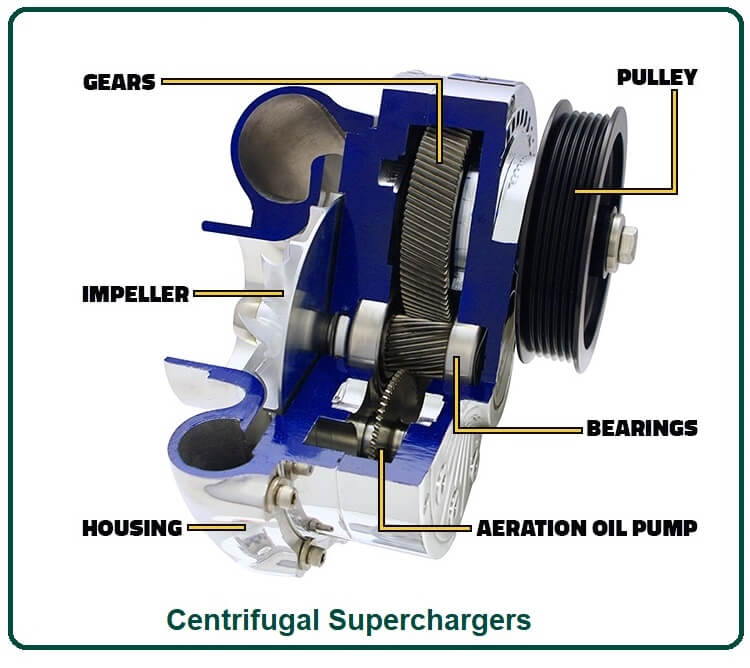 Mention superchargers, & I’m sure most peoples will think of those giant positive-displacement air pumps sitting in the center of the V in a V8 engine. Driven directly from the nose of the crankshaft using a V or toothed belt drive and exited through the bonnet or hood, just the sight of one is spine-tingling in anticipation of engine performance.

Delivering massive amounts of engine torque at impressively low engine speeds can be great, but in the modern world, where thermal efficiencies & under-bonnet packaging count in more people’s eyes, there’s another way – the centrifugal supercharger. In terms of air compression efficiency, centrifugal compressors are likely to be far more efficient than other types of superchargers, & values ​​of adiabatic efficiency of more than 80% can be easily realized.

More important, though, efficient compression reduces the rise in temperature of the engine intake charge, and with lower charge temperatures, the likelihood of a combustion explosion is reduced. And if there’s one thing supercharged spark-ignition engines love, it’s very cold, dense oncoming air. However, the problem with a centrifugal supercharger is that the air flowing through it is proportional to squares of the rotational speed of the impeller.

Compare this to the air flowing through an internal combustion engine, which is only proportional to speed, and immediately you can see that there is a mismatch. This is not a problem when centrifugal compressors are driven by an inward flow radial turbine, as is the case with a typical turbocharger. Here, the mass flow of the exhaust gas that powers the turbine effectively balances the work done by the compressor, & the systems, if designed well, will achieve their balance. But when this compressor is driven mechanically from the crankshaft, compromises have to be made.

As soon as the engine starts, the supercharger connected to the crankshaft through the belt also starts rotating. The impeller of the centrifugal supercharger begins to rotate and axially sucks the high-speed and low-pressure air from the atmosphere. It compresses the air, reducing the wind speed, and delivers high-density air at its outlet.

The pressure increases and the velocity decreases as the air moves from the impeller blade to the diffuser blade and then finally through the casing. High density and high pressure compressed air is sent to the inlet manifold of the engine. This highly dense air burns the fuel in the engine cylinders more efficiently and substantially increases the power of the internal combustion engine. The impeller rotates at a speed of up to 100,000 rpm.

The impeller gains rotational motion through the driving pulley, which is connected via a crankshaft to a chain drive or belt drive. This impeller rotates at a very high speed, can begin to suck the low-pressure and high-velocity air, and be drawn directly onto the diffuser.

The diffuser is placed inside the housing and is fixed with an impeller and which converts this centrifugal force into high pressure and low velocity, in which the condensation of hot air is delivered to the intercooler through an outlet of the housing.

The intercooler can lower the air temperature and send cooler air containing more air molecules and more oxygen to the engine’s inlet valve during the suction stroke. More air can burn more fuel to generate larger horsepower than an internal combustion engine.

If the unit is geared to supply sensible boost pressure at low to medium speeds, excessive intake pressure will be generated at high speeds. Counter this, some sort of blow-off valve limiting the maximum boost pressure may be provided, but this is highly inefficient and inevitably noisy.

On larger installations, where weight and/or size are not an issue, some type of continuously variable transmission may be included, but at this level of complexity, weight may also be an issue. Therefore, the most sensible approach is to tune the compressor wheel speed to maximum boost at maximum engine speed.

When this isn’t necessary, for example, when cruising down the road, the effort should produce knock-free motoring in an effort to provide little but no boost. In addition, since there will be little or no increase in normal road driving speed when used as daily transport, fuel savings and tailpipe emissions should not exceed legal requirements.

Also, Read: What Is Stub Axle? | Types of Stub Axle | What Is Front Axle? | Classification of Axle

It is a revolving wheel that must spin at high rpm. It can be removed by scrolling the nut on the end of the impeller shaft. The impeller is made of steel and alloyed alloys and is machined on a CNC milling machine. The impeller speed can reach 100,000 rpm.

The centrifugal supercharger has a larger gearing section. The sun gear is small, surrounded by a mid-size three gears closed with a ring gear.

Planetary gears help an impeller to achieve greater speed and are needed to produce the desired boost. The sun gears are connected directly to the impeller shaft, and the ring gear is connected to the engine’s crankshafts via a belt or chain.

It is a stationary wheel with a larger vane than an impeller. The impeller sucks air at high speed and low pressure. A diffuser converts this into low-speed and high-pressure air. This air travels throughout the housing outlet.

The drive pulley is getting the rotational moment from the engine crankshaft, which is connected via a belt or chain with the drive pulley of an engine.

The ball bearing actually supports the rotating shaft, which absorbs the drive load. After long use of the device, the bearing may wear out and cause noise problems.

The outer body of the device is called the housing. It is made of aluminum and is a material that has high strength, and low weight, and is also corrosion-resistant. The housing is manufactured by the casting process and machined in a way that must match the impeller design and size.

To eliminate these problems under surge conditions, a bypass valve (sometimes called an anti-surge valve) is used to release the excess pressure. The bypass valve is actuated using an intake manifold vacuum, which opens the vent valve and releases pressure in the air intake.