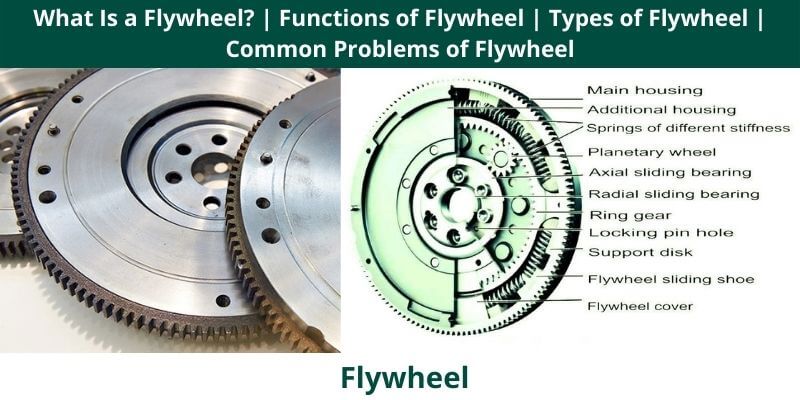 What Is a Flywheel? 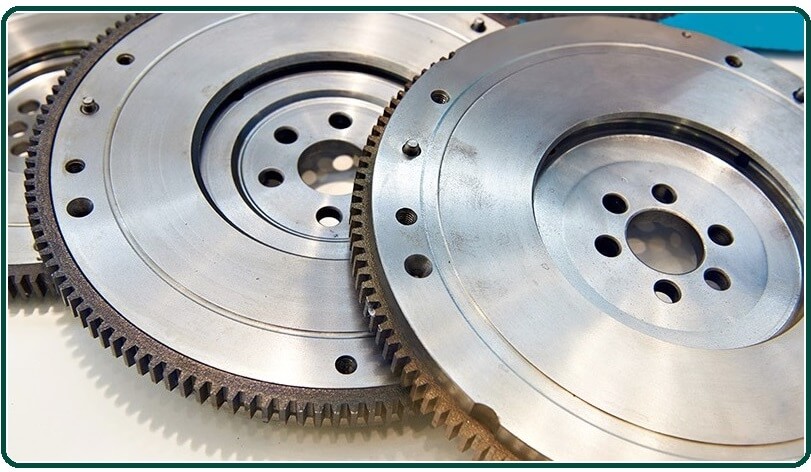 As a heavy wheel, a flywheel needs sufficient force to rotate on its axis. It opposes the change in rotational speed from its moment of inertia. Changing the energy stored on the Flywheel, its rotational speed must be increased or decreased.

That is, it keeps spinning until a lot of force is applied. A large amount of kinetic energy is conserved when the Flywheel is spinning.

This energy is later used to start the engine or drive the vehicle at high speed. Today we will look at the definition, construction, function, working principle, and symptoms of a bad automobile flywheel.

The Flywheel can be found in almost all types of automobiles as they serve different purposes, which will be discussed here. The functions of a flywheel in an automobile engine are given below:

Because the piston is offset from the center of crankshaft vibration and wobble, this is also because each piston fires at a different angle.

The function of the Flywheel in this situation is to suppress the side-to-side motion. This is achieved due to the heavyweight of the Flywheel. The Flywheel reduces vibrations throughout the engine as the engine is stable and balances on the mounts.

Another function of a flywheel is achieved by stabilizing engine speed. It also smooths engine speed and reduces wear and tear on drivetrain components.

The Flywheel also limits the wear between the transmission shaft and the driveshaft. These two are connected by a universal joint.

The crankshaft converts piston movement into rotary motion, which is jerky when power is generated. The rotational speed of the crankshaft is constants, & the engine runs smoothly. This is because the mass of the Flywheels applies inertia that keeps the engine crankshaft rotating between each piston firing.

The weight of the Flywheel determines engine performance. The weight is designed based on the performance of the vehicles. The heavy Flywheel allows the engine to operate under loads that can cause engine failure. A larger truck or trailer does well with a heavy flywheel, while sports cars and some commercial cars make good use of a lighter flywheel.

A solid disc flywheel is a kind of Flywheel. It is used in singles flywheel thresher, which is made of cast iron. Solid Disc Flywheel The Flywheel is equipped with a hub and disc. In the design calculations of a solid disc flywheel, various parameters are used as inputs. This includes the dimensions of the Solid Disc Flywheel. In addition, the resulting functional values ​​are calculated.

A rim-type wheel will detonate at a much lower rotary speed than a solid disc-type wheel of the same weight & diameter. For minimal weight and high energy-storage capacity, flywheels can be made from high-strength steel and produced as a tapered disc, which is thicker in the center.

In this type of Flywheel, the low-velocity Flywheel has a velocity of 10000 rpm. They are heavier and heavier than the high-velocity Flywheel. They require periodic maintenance and do not use magnetic levitation bearings.

Their installation requires special concrete construction to bear its own weight. They are more economical than high-velocity flywheels.

In this case, the clutches will not release completely. These will cause different levels of gear grinding when changing gears. Also, when it starts to a standstill, the car may completely fail to put it in first gear. This problem occurs not only in the Flywheel but also in the bearing or bushing of the Flywheel or crankshaft assembly.

This problem occurs when the gear changes automatically while driving. This can cause the gear to slip. This happens when powers are not transferred to the wheel, resulting in clutch failure.

A slipping clutch will eventually deform the Flywheel as well.

The pressure plate can cause a sudden grinding sound. The other parts of flywheels in the clutches assembly will heat up. These will lead to bends and even cracks.

When the clutch wears out, a burning smell will arise. It is caused by a faulty flywheel or unskilled operators. The face of the clutches is designed with the proposed materials to reduce the amount of sound the clutch makes while operating. It produces a lot of heat due to friction when the facing is not operated properly.

This is when the clutch has difficulty engaging. As the clutch takes hold, it slips along with the Flywheel and repeatedly releases the Flywheel. It sounds like a stutter or vibration when released.

Clutch chatter often occurs in any gear when starting with a full stop.

This fault can be difficult to identify because there is a defect in the clutch disc, pressure plate, or release bearing. These parts can also be broken, deforms, or contaminated with oil. 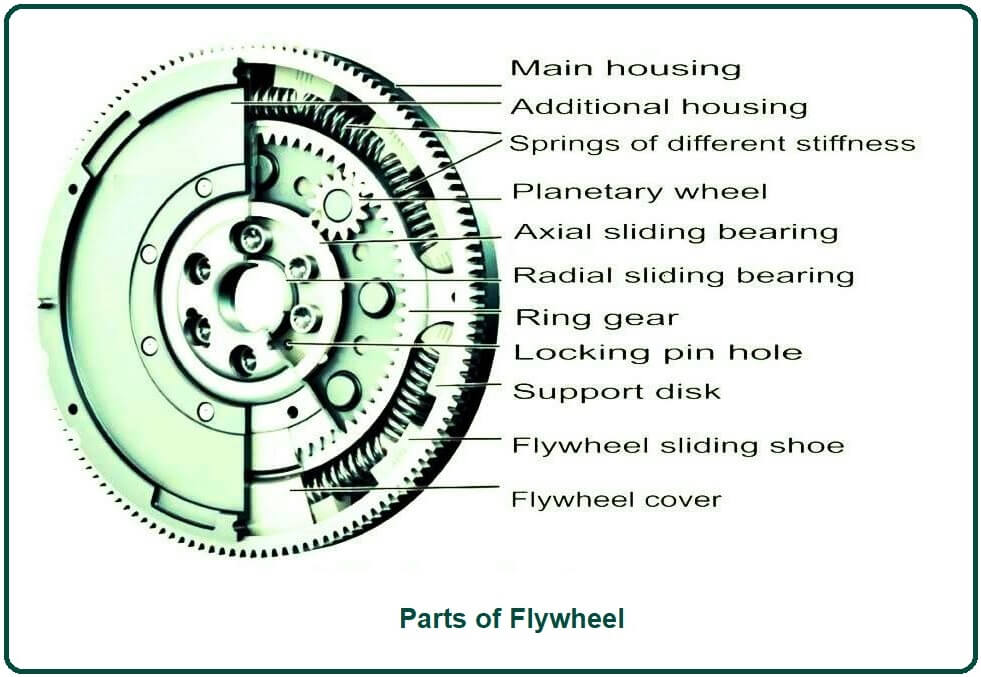 The flywheel housing is solid and sits on the outside of the Flywheel. The flywheels are the part of the engine that spins and provides power to the alternator.

The Flywheel is composed of two-stage bent springs in parallel. The external arc is adjusted to raise the spring when the engine is running. The soft outers arc spring only serves to rectify the indefinite resonant frequency range.

Whereas an axially acting bearing serves only for weight compensation, imbalance or parasitic radial forces introduced by the motor or generators unit must be compensated.

A ring gear is mounted in the outer diameter of the Flywheel. It is usually attached to the Flywheel by means of an interference fit, which is prepared by heating the ring gear. So, thermal expansion enables it to be placed around the Flywheel.

As the name suggests, support discs are attached to the inside of the Flywheel to support the two-stage bent springs and other components of the Flywheel.

Sliding shoes preferably have a convex radial exterior that is on the inner wall of the flywheels. In these areas, they are preferably manufactured to promotes slip and withstand the least amount of wear and tear.

The flywheel cover is usually made of chrome. These chrome-plated flywheel covers will prevent dust from getting into the inner workings of the Flywheel, causing it to run poorly.

The working principle of the Flywheel is quite simple and interesting as it stores the energy for the use of the vehicle. Just as a mechanical battery stores energy in chemical form, the Flywheel saves power in the form of kinetic energy.

The more energy is produced, the more speed the Flywheel spins. It has a high moment of inertia which means heavy. It is better to spin faster than to increase its mass. This is because a lighter wheel generates twice as much energy like a flywheel that is more or twice as heavy.

That is, the lighter the Flywheel, the more energy is stored. It is advisable to use light, high-speed wheels instead of wheels with a large weight. But heavy vehicles will be suitable for heavy vehicles like trailers, trucks, vans, etc. This is because they carry extra weight and are not important for running at high speeds.

So, knowing how a flywheel works, the higher the speed, the higher the energy. However, if the speed continues to increase, the wheel may not be able to handle the material force. This can lead to a breakup.