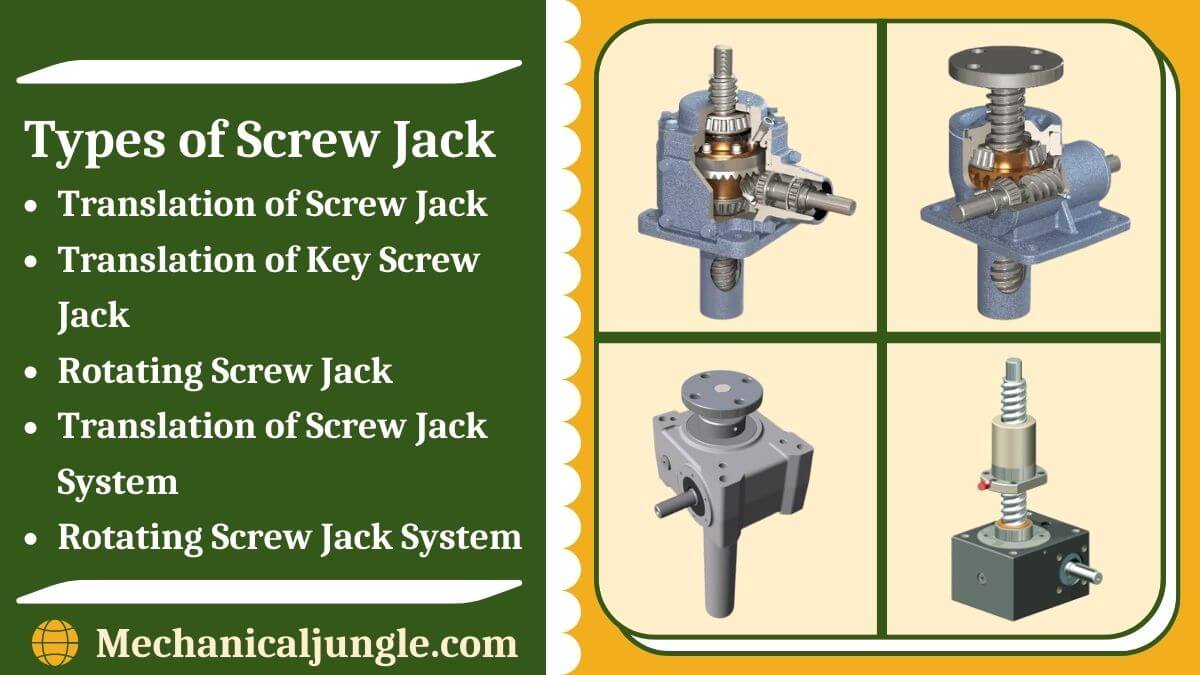 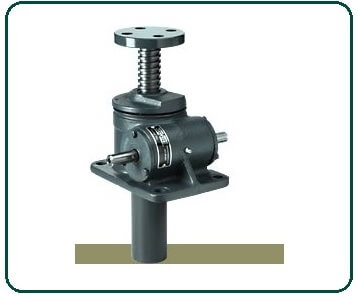 Jackscrews, also known as jack screws or screw jacks, are among several different types of linear motion actuators that are often used to lift or move loads. They can be used in any application requiring linear motion or where pushing or pulling along a linear axis is required.

Other common mechanical actuators include lead, ball, and roller screws. Some basic components include a jackscrew. The main piece is the screw itself. The screw can be attached to some sort of plate that holds the load or attached to another piece of machinery which is then moved.

Sometimes instead of a plate, there is an attached nut or nut flange so that the screw remains stationary and only the nut assembly is moving. There is also a stationary base unit housing gear. One of the most familiar types of jackscrews is the traditional manually operated, handheld type,

which operates by applying force against a handle that lifts, lifts, or lowers a screw from a base unit. Other common means of driving a jackscrew are either AC or DC motors.

There are a few other ways to classify jackscrews as well. One of them divides the screw into translation and reciprocating types. Translating jackscrews use a lift shaft or screw that moves in or out of the worm gearbox.

The lift shaft can protrude from either the mounting flange of the gearbox or the top side of the worm gearbox. In contrast, rotating jackscrews are designed so that the lift shaft remains stationary and a lifting nut moves along the lift shaft.

Like translating jackscrews, the screw can protrude from the mounting flange down or up from the top of the jack. In order to translate the lift shaft or nut, both configurations must be secured to prevent rotation. 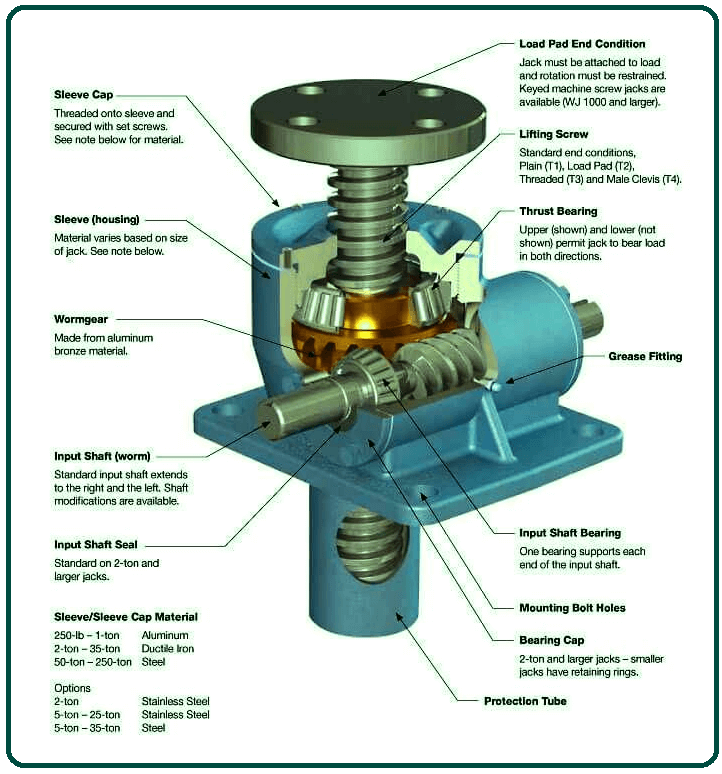 Screw jacks are gearboxes assembly, either worm gear or bevel gear, & a transmission products lead screws, ball screw, or roller screw that is used to convert rotary to linear motion through the use of a motor. They can be used to push, pulls, tension, lock, unlocks, tilt, pivot, roll, slide & lift, or lowers loads, anything from a few kilos to thousands of tons.

Screw jacks are essential components of automatic machines. Safety and legislative concerns encourage automation of heavy load handling and lifting, especially in areas where workplace and health and safety laws have been developed.

The trend from hydraulic actuation to Electromechanical actuation.

Hydraulic systems waste energy when the fluid rotates under constant pressure, regardless of how much work the hydraulic positioning requires. A hydraulic jack or ram requires constant pressure to maintain its position when a load is in place. In contrast, the electric motor used to drive a spindle lift truck consumes energy only when it is driving the load to a required position.

The advantages of electromechanical over hydraulic can be summarized as:

Also known as powers screws, lead screws come with several different types of thread profiles that are suitable for a variety of applications. Acme lead screws are defined by their trapezoidal thread profile and 29° flank angle and are commonly found in American Imperial machine screw jacks.

An alternative to the Acme lead screw in a machine screw jack would be a square lead screw. European or other international screw jacks use a trapezoidal lead screw with a 30° flank angle and comply with the ISO metric standard.

Ball screw jacks require the threads of the lead screw to have a profile that allows the balls to travel. To increase load distribution and reduce wear, the ball screw track has a Gothic arch profile.

The popularity of trapezoidal screw thread comes from the fact that it is easier to machine and, therefore, more economical than square and ball screw thread forms. Additionally, due to the large area of ​​contact between the lead screw threads and the worm wheel, there is a large load-carrying capacity.

This results in higher friction which is detrimental to efficiency but also means that the system is more likely to be self-locking. This low efficiency implies that such screw jacks are more suitable for non-continuous or intermittent operation.

Same as above, but the lead screw is turned so that it doesn’t turn. This is important if the lead screw’s end is not to be connected to a load. Both encrypted & non-encrypted transmission screws are commonly used in applications where more than one screw jack is connected to a commons load.

6x Screw Jack System. The lead screw ends are to be connected to a common load. Clearances are required under the bottom mounting plate of the jack body to accommodate the translating screw cover.

4x Screw Jack. Translate lifting nuts. Clearance is not required under the lower mounting level of the jack body. When designing the lifting plate, however, it should be kept in mind that the plate may move over or behind the lifting screw. The translation speed of the screw jack is affected by the number of times the screw spindle is started.

What Is a Screw Jack?

Machinist’s jacks — A jackscrew, or screw jack, is a type of jack that is operated by turning a leadscrew. It is commonly used to lift moderately and heavy weights, such as vehicles; to raise and lower the horizontal stabilizers of aircraft; and as adjustable supports for heavy loads, such as the foundations of houses.

Parts of a Screw Jack

Power Jacks is a leading manufacturer and largest in the UK for precision screw jacks, linear actuation, power transmission, and mechanical jacking.

Here are my cad models of Screw Jack designed in Solidworks and also assembly. You can find the link to a playlist of Screw Jack Parts.

We can tailor an optimum solution to best fit your screw jack application. Reliability and good service are our secrets to success.

How Does a Screw Jack Work

In Detail: When a screw jack unit is operated, the rotation of the worm shaft causes the worm gear to rotate. For rotating screw jacks the lead screw is fixed to the worm gear and they rotate at the same speed. As the worm gear turns, the friction forces on the screw thread act to turn the nut also.