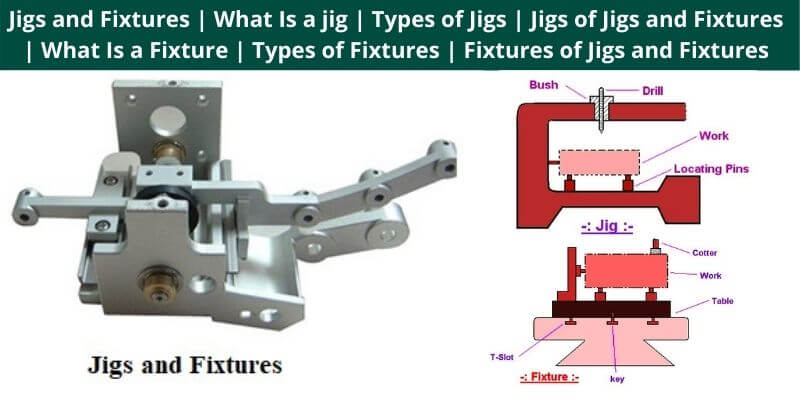 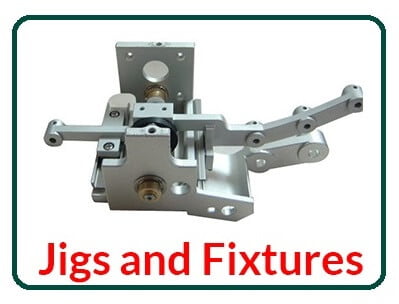 Some machining operations are very simple ‘which are done quite easily, such as turning, the job is in position in the chuck, and the turning operation is performed easily. Such operation does not require any other equipment to operate the machine or guide the equipment.

The device that guides the tool is called the jig, and the device that operates in position is called the fixator. Jigs and fixtures are special-purpose equipment used to facilitate production (machining, assembling, and inspection operations) when the workpiece is based on the concept of interchangeability, according to which each part will be produced within an established tolerance.

Jigs and fixtures provide through the manufacture of interchangeable parts as they establish a connection with tolerance between the work and the cuttings tool. They eliminate the need for a special set for each individual park. Therefore a jig can be defined as a device that holds and positions the work, locate or guide the outing tool relative to the workpiece, and is usually not fixed on the m / c table. It is usually mild in construction.

A fixture is a work-holding device and working condition, but the cutting tool does not detect or dictate its position ‘; the setting of the tool is done by machine adjustment and a setting resistor using a slip gauge. A fixture is clamp-ed to hold or machine table.

Also, Read: Forging And Its Types:

Uses of Jigs And Fixtures:

What Is a jig?

A jig is a type of custom-made work holding device that is used to control the location and speed of parts and other equipment. In the CNC machining process, a jig often locates the workpiece in an appropriate position and cutting tool. Guides to maintain the correct relationship between operation, work, and cutter. When the jig moves, the instrument remains stationary. The machining part is usually secured to the jig by clamping.

Jigs of Jigs and Fixtures: 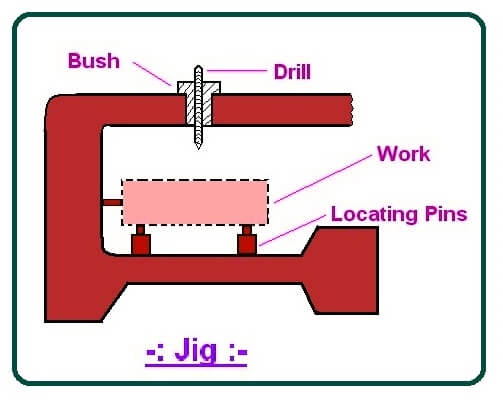 The most common jigs are drill and boring jigs. These devices are basically the same. The difference lies in the size, types, and placement of drill bushes. Boring jigs usually have large bushes. These bushes may also have internal oil grooves to keep the boring bar lubricated.

Often, boring jigs use more than one bushing to support the boring bar during the machining cycle. In the shop, drills jigs are the most widely used form of jig. Drills jigs are used for drilling, tapping, reaming, chamfering, counterboring, countersinking, and similar operations. Sometimes, drill jigs are used to perform assembly work.

In these situations, bushes guide pins, dowels, or other assembly elements. Jigs are identified by their basic construction. Two commons forms of jigs are open and closed. Open jigs operate on only one, or sometimes two, edges of a workpiece.

On the other hand, closed jigs operate on two or more sides. The most commons open jigs are template jigs, plate jigs, table jigs, sandwich jigs, and angles plate jigs. Typical examples of closed jigs include box jigs, channels jigs, and leaf jigs. Other forms of jigs rely more on the application of the instrument for their identification than their construction. These include indexing jigs, trunnions jigs, and multi-station jigs.

Typical industry applications have led to the development of specialized drill jigs. For example, fine rivet holes located in aircraft fuses and wings need to be drilled, creating the design of large jigs with shrubs and liners installed, unlike the plane surface.

A portable air-feed drill with a bushing attached to its nose is inserted through the liner in the jig, and drilling is completed at each location.

What Is a Fixture?

Fixtures of Jigs and Fixtures: 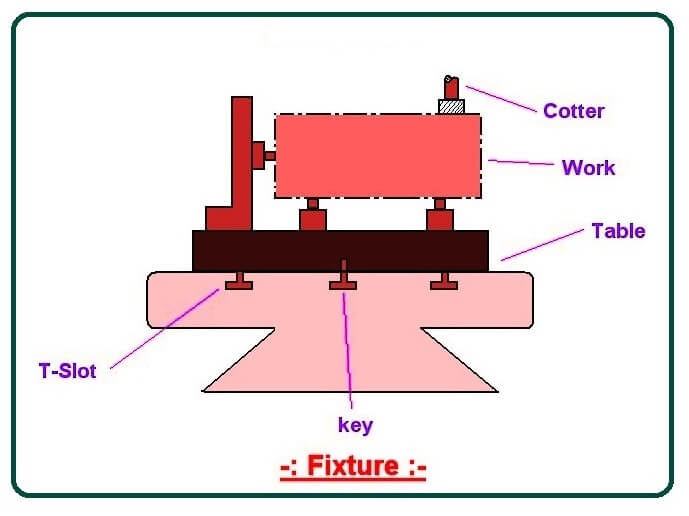 Fixtures have much wider scopes of application than jigs. These stewards are designed for applications where the cutting tool cannot be easily guided as a drill. With fixtures, an edge finder, center finder, or gauge block positions the cutter. Examples of more common fixtures include milling fixtures, lathe fixtures, saw fixtures, and piece fixtures. In addition, a fixture can be used in almost any operation requiring a precise relationship to the position of the tool to a workpiece.

Fixtures are often identified by machine tools where they are used. Examples include mill fixtures or lathe fixtures. But functions of stability can also identify a stability type. So can basic construction of equipment.

Difference Between Jig and Fixture:

Both jigs and fixtures used for machine tools can reduce work time and improve productivity. Fixture vs. jig, what are the differences between fixture and jig.

Jigs are tools that hold a manufacturing tool in place as it performs a repetitive task like drilling or tapping holes. Fixtures, on the other hand, don’t guide a manufacturing tool but hold a workpiece steady in a fixed position, orientation, or location. A standard vise is a common household example of a fixture.

The jig is the device that guides the tool, while the fixture is a tool that securely and firmly holds the job in position during machining operations.

We will begin our explanation of jigs and fixtures with jigs. In short, a jig is a tool used to control or guide the motion of a cutting tool such as a drill and sometimes to hold workpieces together.