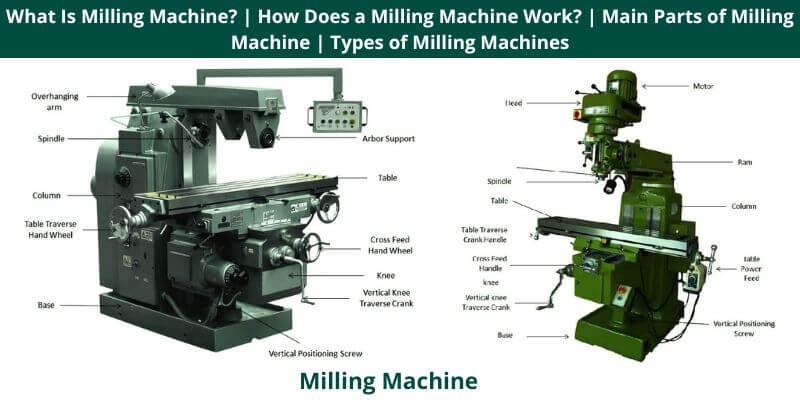 What Is Milling Machine? 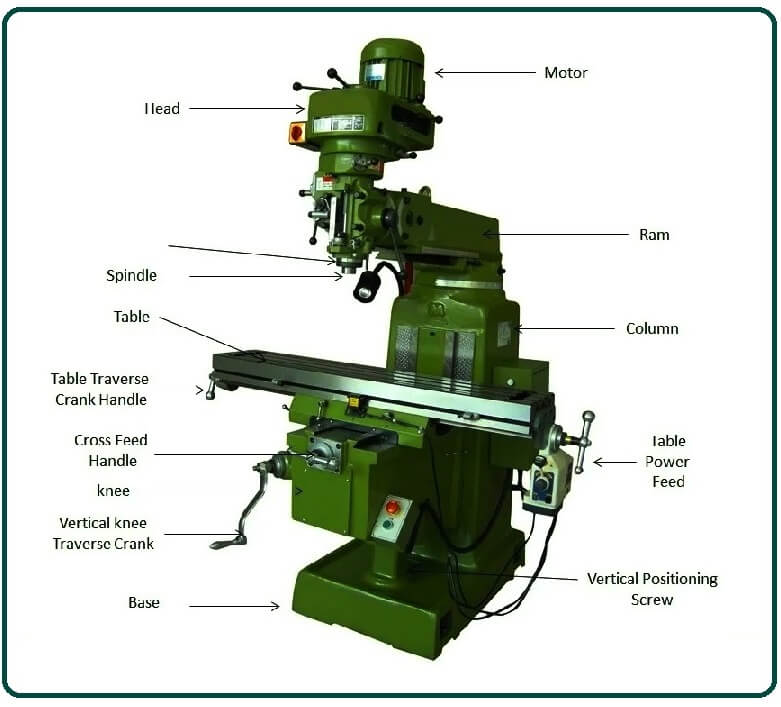 A milling machine is a tool primarily found in the metalworking industry. Milling machines are equipment designed to machine metal, wood, and other solid materials. Often automated, milling machines can be mounted in either a vertical or horizontal orientation to carve the material, depending on a pre-existing design.

In general, this machine is used to shape solid products by removing excess material to form a finished product. Millings machines can be used for a variety of complex cutting tasks – from slot cutting, threading, and rabbeting to routing, planning & drillings.

They are also used in die the sinking, which involves shaping steels block so that they can be used for various tasks, such the moldings, plastics, or coins. This machine can hold more than one device at a time. The cutter spins at high speed, and because of the many cutting edges, it removes metal at a very high rate.

Machines can also hold one or more cutters at a time. Thus, the milling machine is one of the most important machines in the workshop. All the operations can be done in this machine with high accuracy. The metal removal rate is higher as compared to lathe machines, planer machines, and shaper machines. It has good accuracy and a superior surface finish. That is why a milling machine finds wide application in production work.

How Does a Milling Machine Work?

The milling machines were developed backs in the 18th century. Its predecessor models were used to make smaller gears inside watches. A few years later, manufacturers started making for the metal sector. Earlier models are specifically designed to rely heavily on the precision and accuracy of the machinist. In contrast, the latest or CNC mills are run by computers programs or algorithms.

Firsts glances, you might mistake it for a circular saw, which only cuts the material into smaller parts. However, upon closer inspections, you can see that it cuts a workpiece into a specific shape.

It can also carve flat surfaces, smooth edges, and drill holes with threading depending on the type of attachment used. A fast rotating milling or cutting attachment removes parts of the workpiece. The machinist feeds the stock into equipment to produce the desired result. 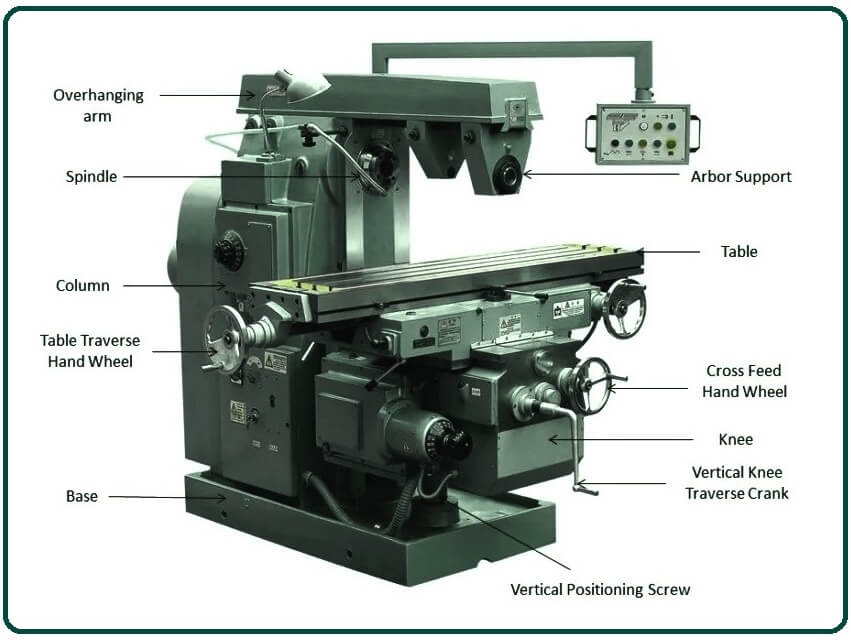 Columns, including the base, are the main casting that supports all other parts of the milling machine.

It is castings that support the saddle & table. All gearing mechanisms are enclosed within the knee.

It is the knee that contains the power feed mechanism. It is used to control longitudinal (left and right), transverse (in and out) and vertical (up and down) feeds.

It is a rectangular casting that is present at the top of the saddle.

It is shafted that is used to hold and drive the cutting tool of the milling machine.

It is a horizontal beam located at the top of the column. It may be a single casting that slides over the dovetail ways on the top face of the column.

It is a casting with a bearing that supports the outer end of the arbor. It also helps to align the outers end of the arch with the axle.

The hanging arm in vertical machines is called ram. One end of the rams is mounted on the top of the column, and the other end is fitted with a milling head.

The cutter rotates at a normal speed, and the work gradually overtakes the cutter. The work can be fed longitudinally, vertically, or in a cross direction. As the work progresses, the cutter teeth remove the metal from the works surfaces to produce the desired shapes.

The size of the millings machines is determined by the dimensions of the maximum lengths of the longitudinal, cross, & vertical travel of the table & also the working surface of the machine.

In addition to the above dimensions, the number of spindle speeds, number of feeds, available power, spindle nose taper, net weight, and required floor space, etc. Consideration should also be given to specifying the machine as a whole.

For working with angular surfaces, a milling cutter is mounted on the spindles. In some vertical milling machines, spindles can be adjusted up & down. These machines are equipped with a precision tool that is used to form and shape the workpiece by removing the stock from the metal workpiece. Depending on the material and equipment, plastics and other material is also machined.

The Milling machines can be computer numerical controlled, manually controlled, or combinations of manual and CNC. A rotary cutter is used in the spindle to remove the material of the milling machine.

Because of the vertical spindle movement and movable table cutting options, this machine is more complex than a drill press. Some vertical milling machines have a turret that is rotatable for the upper cutting head, which improves machining options.

Applications for which verticals milling machines are used:

Keyway slots, slotting, keyway, or flat are cut with the help of vertical milling machines with precise fixings.

In this operation, spots or a flat surface are provided on the workpiece. The facing operation is typically used for workpieces that are irregularly shaped.

The major advantages of duplex milling machines are:

The table is rotated from the normal position at an angle of 45 degrees from both sides. The table of horizontal milling machines can be moved in three directions. Helical milling work is also done by this machine. Additional attachments are used to increase the capacity of the machine.

The special attachments used are:

Cutting tools use multipoint rotations to sequentially remove material from the workpiece resulting in the production of custom-designed products or parts. (Types of CNC Machine)

A computer numerical control milling machine consists of a rotating cylindrical cutter that moves along several axes and creates holes, slots, and wide material to turn it into a mechanical part or vehicle. Different machines operate with three to five axes which provide greater detail and accuracy.

Modern computer numerical control milling machine has both vertical and horizontal machining centers. The components of a CNC milling machine are made of materials such as ceramics, plastics, and composite metal materials. Tool magazine and carousel, automatic tool changer, enclosure, and coolant system are technical features of CNC milling machine.

In triple milling machines, the spindle of the machines moves in three directions which are the x-axis, y-axis, and z-axis. Triplex milling machines are very precise as well as highly productive. Triplex Milling Machines are suitable for applications that are based on the accuracy required by the customers.

These machines are used in production work. Drum milling machines have a vertical central drum that is rotated on a horizontal axis like a ferry wheel. Face mill type cutters are provided.

The finishing and roughing cutters provided in a drum milling machine are similar to a rotary-table miller. The fixture rotates slowly, which works against the rotating cutter in the operation of drum milling machines. Typically three or four cutter spindles are provided.

Operation is continued after the machined parts are removed, and new ones are added at the end of the work cycle. Drum milling machines are commonly used in industrial operations. (type of milling machine)

Rotary tables milling machines have the ability to perform up to 2D and 2.5D machine cycles at or around the end of the cylinder. When the machine is being operated in the radial direction, the motion in parallel or parallel to the rotary axis is restricted.

Rotary table milling machines are oriented radially along the centerline of the rotary axis. They have a circular table that can rotate along a vertical axis. In this milling machine, many cutters have to be installed at different heights.

These milling machines have tools that have the ability to copy with tracer control hence the reproduction of the car or the copying of interior and exterior geometry in two dimensions.

They are the perfect machine for reproducing irregular and complex shaped dyes and trace elements.

Some tracer-controlled milling machines have servo mechanism arrangements, and this mechanism is complex. Processes that involve machining cavities such as die-sinking take place on three-dimension duplicators or profilers.

These machines are strong and powerful. C-frames milling machine uses hydraulic motor for its working. They are ideal for industrial use.

The different milling machine operation is:

This operation creates a flat surface on the face of the workpiece. This machining operation is performed on surfaces that are perpendicular to the axis of the cutter. The operation is done by a face milling cutter mounted on the stub arbor of the machine.

It is the machining process that produces flat vertical surfaces at the edges of the workpiece. This operation is performed using side milling cutters.

It is a process of joining flat surfaces with the cutter axis parallel to the surface. It is also called surfaces milling or slab milling. Plain milling cutters are used for plane milling.

It is a process in which two sides millings cutters are used to simultaneously machine two opposite sides of a workpiece. The straddles milling operations are shown in the figure below.

Thy is machinings processes in which two or more milling cutters are used together to perform different milling operations simultaneously. In gang milling, the cutter is mounted on the arbor.

It is the process of special machining contours made up of curves, straight lines, or complete curves on a single cut. To perform this operation, a milling cutter made in the shape of the cut contour is used. This operation is accomplished using convex, concave & corner rounding milling cutters.

These millings operations are used to cut a profile on workpieces.

It is the process of producing flats surfaces that can be workable at horizontal, vertical, and at any angle, taking as reference. An end milling cutter is used to accomplish this operation.

It is the machining process used to create narrow grooves or slots on a workpiece.

This milling operation is used to create keyways, grooves, and slots on the workpiece.

This is the milling process used to cut gears on the workpiece. This operation is performed by using a formed milling cutter called involute gear cutter.

This milling operation is performed for the production of helical design items such as helical gears, twisted drills, etc. This is done on the periphery of the cylindrical workpiece.

It is a machining process used to make cams. Cams are used to open and close valves in internal combustions engines.

It is a process of milling used to cuts threads on cylindrical workpieces. It’s all about milling machine-operation parts & types.

If you find any improvements in the article, then please let us know through your valuable comments. And if you find this article informative and useful, please don’t forget to share it.