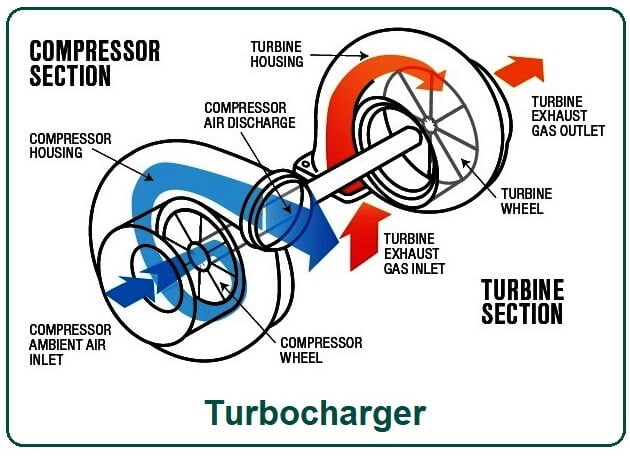 Turbochargers are an exhaust-driven air pump consisting of pair of turbine wheels, not unlike a pinwheel, on the same shaft. A turbine is located in the exhaust stream; When the engine spins, the exhaust makes it a spin. It turns the second turbine, which is part of the intake system that directs air into the engine and acts as a pump. To develop a boost, the engine must work hard enough to generate significant exhaust pressure to rotate the turbocharger.

This results in “turbo lag” – the engine doesn’t get a power boost at low engine speeds, and it seems as though the car is hesitating instead of accelerating. Newer, more technologically advanced cars tend to have less turbo lag than older cars. The advantage of using turbocharging to increase power is that when the turbo is activated, the engine uses fuel, whether it is gasoline or diesel.

The advantage of turbocharging is that carmakers can use smaller, gas-sipping engines to achieve the same power and acceleration as a larger gas-guzzling engine. Cars with turbocharged engines include Volkswagen GTI, VW Passat, & Jetta models, Hyundai Sonata (as an option), Kia Optima, Buick Regal, Chevy Cruze 1.4, & Sonic 1.4, and soon, Hyundai Veloster as an option.

Turbochargers are small turbine that sits between the engine and the exhaust. For both as well as the car’s air intake, a turbocharger uses exhaust gases to spin a turbine which then forces more air into your car’s engine & increases the car’s powers. There are four parts that allow turbochargers to work. They are:

The turbocharger itself resembles a snail and consists of an air intake, an exhaust intake, two separate impellers (a turbine at the rear and a compressor at the front), and a charged air exhaust that goes into the intercooler. There is also a hose line for oil.

The electronic brain of a turbocharged engine requires different calibration for fuel-to-air mixing and ignition timing than a car with a naturally aspirated engine. As such, if someone adds a turbocharger to an engine that never had one, it must restart the engine’s Electronic Control Unit (ECU) for it to function properly.

To reduce the temperature of the forced charged air from the turbocharger, a secondary radiator, or intercooler, blocks the air before it reaches the engine. It uses coolant as a coolant.

Between the wastegate exhaust intake and the turbocharger is a valve that bypasses the turbine to control boost pressure.

There is a large variety of turbocharger and turbocharged applications. Here’s a rundown of common setups. 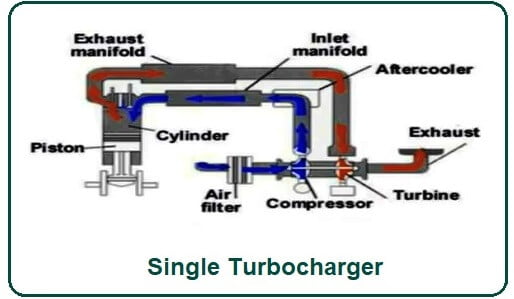 Single turbochargers are what most peoples think of as turbo. By varying the size of the elements within the turbo, completely different torque characteristics can be achieved. Larger turbos provide higher levels of top-end power, while smaller turbos can spool faster & provide better low-end powers.

They are the cost-effective ways of increasing engine power & efficiency and as have become increasingly popular, allowing smaller engines to increase efficiency by produced the same powers larger naturally aspirated engines but with less weight. However, they operate best within a narrow RPM range, and drivers will often experience ‘turbo-lag until the turbo starts operating within its peak rev band. Single turbochargers are the most common types of turbocharged setup.

It has a single turbine, and in the mainstream consumer market, it is commonly used in more pedestrian cars that don’t require a lot of horsepower or torque. In the aftermarkets, this is one of the most popular tuner upgrades. 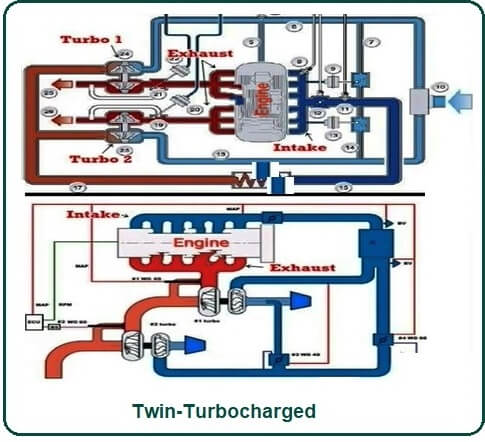 In the case of a V6 or V8 engine, this can be done by assigning a turbo to work with each cylinder bank. Alternatively, a smaller turbo at lower RPMs can be used with a larger turbo for higher RPMs. This second configuration, known as twin sequential turbocharging, allows a wider operating RPM range and provides better torque at lower revs reducing turbo lag but also power at higher RPMs. Unsurprisingly, having two Turbochargers Significantly increases the complexity and associated costs. 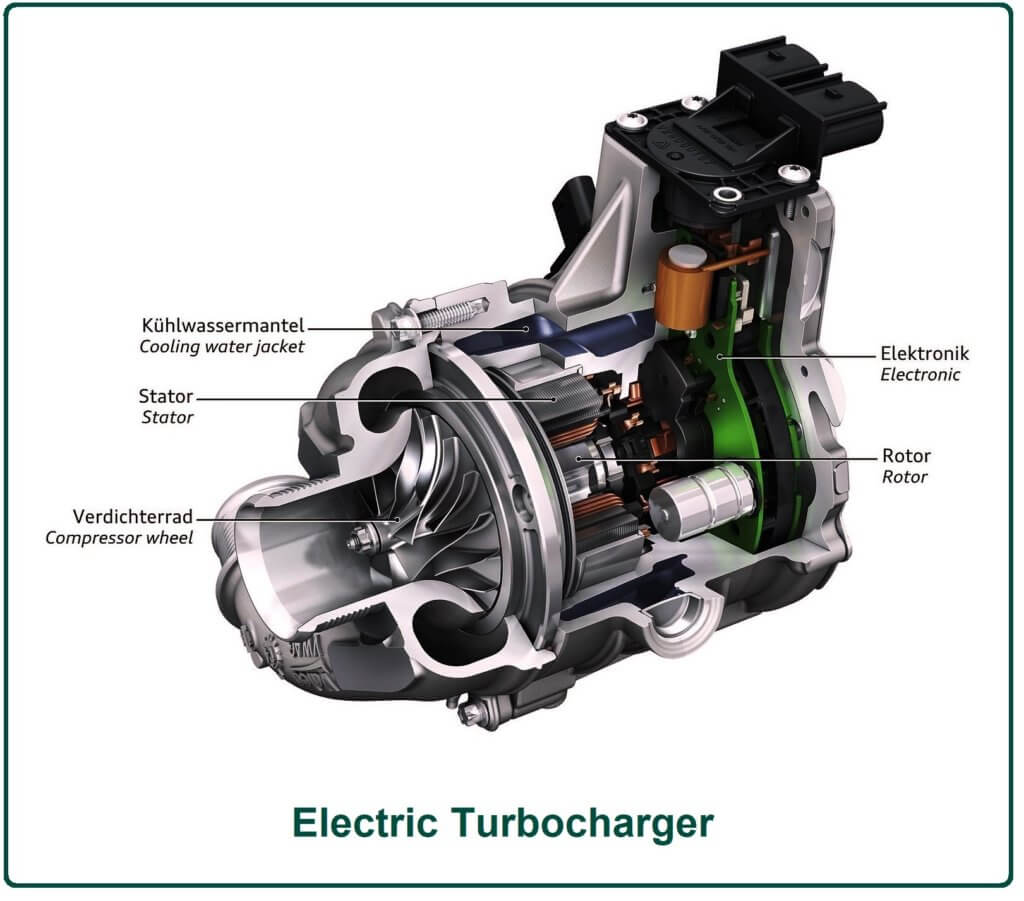 Electric turbochargers are used to eliminate turbo lag & assist a normal turbocharger at low engine speeds where a conventional turbo is not the most efficient. This is achieved by adding electric motors that spin the turbo’s compressor from start to finish and through lower revs until the power from the exhaust volume is sufficient to make the turbocharger work.

This approach makes turbo lags thing of the past & significantly increases the RPM band within which the turbo will operate efficiently. So far, so good. It would seem that electronic turbos are the answer to all the negative features of conventional turbochargers; however, there are also some disadvantages.

Most are around cost & complexity, as the electric motor must be adjusted and operated, as well as cooled, to prevent reliability issues. The concept of an electric turbocharger has been floated for some time, but it took Formula 1’s strength and billions of dollars of research and development to engineer a production-worthy product. An e-turbocharger adds power to the mix to eliminate turbo lag, with a design taken from the current crop of Formula 1 cars.

A small electric motor is mounted between the turbine housing and the compressor and drives the 48V electrical system. The electric motor can rotate the compressor before the exhaust gases, thus eliminating the time between no boost and boost. Audi says that adding an electric motor to its unit “reduces [the turbocharger’s] response time to less than 250 milliseconds, which is faster than the average human reaction time.” 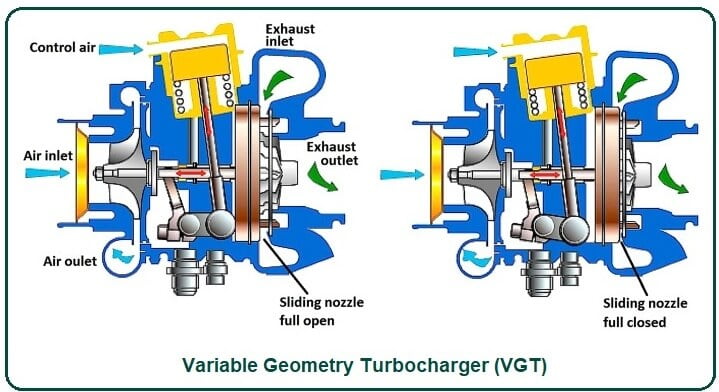 Typically, VGTs include a ring of aerodynamically shaped vanes turbine housing at the turbine inlet. In turbos for passenger cars & light commercials vehicles, these vanes rotate to change the gas rotation angle and cross-sectional area. These internal vanes change the turbo’s area-to-radius (A/R) ratio to match the engine’s rpm and therefore give peak performance.

At lower RPMs, the lower A/R ratio allows the turbo to spool faster, increasing the velocity of the exhaust gas. At higher revs, the A/R ratio increases, leading to an increase in airflow. The resulting lower boost threshold reduces turbo lag and provides a wider and smoother torque band.

Perhaps one of the most extravagant forms of turbocharging, VGTs are limited in production though fairly commons in diesel engines as a result of cost & exotic material requirements. Internal vanes within the turbocharger alter the area-to-radius (A/R) ratio to match the RPM. At low RPMs, a lower A/R ratio is used to increase the velocity of the exhaust gas and spool the turbocharger faster. As revs climb, the A/R ratio increases to allow for an increase in airflow.

While VGTs are more commonly used in diesel engines where the exhaust gases have a lower temperature, VGTs have so far been limited in petrol engine applications due to their cost and the need for components made from exotic materials. The high temperature of the exhaust gases means that the vanes must be made from exotic heat-resistant materials to prevent damage. This has limited their use to applications within luxury, high-performance engines. 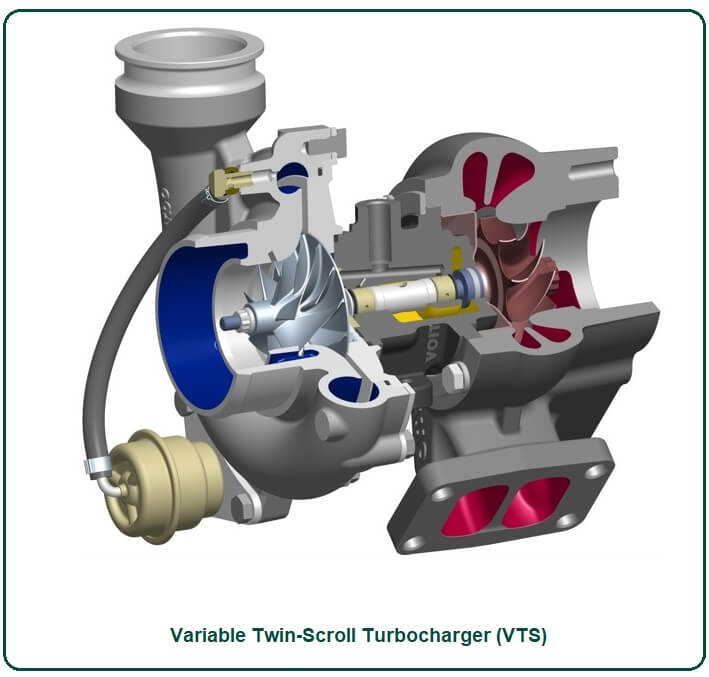 As the name suggests, the VTS turbocharger combines the advantages of twin-scroll turbo and variable geometry turbo. It does this by the use of valves that can redirect exhaust airflow to only one scroll or by changing the volume of the valve opening to allow exhaust gases to be split into both scrolls. The VTS turbochargers design provides a cheaper & more robust alternative to the VGT Turbo, meaning it is the viable option for petrol engine applications. 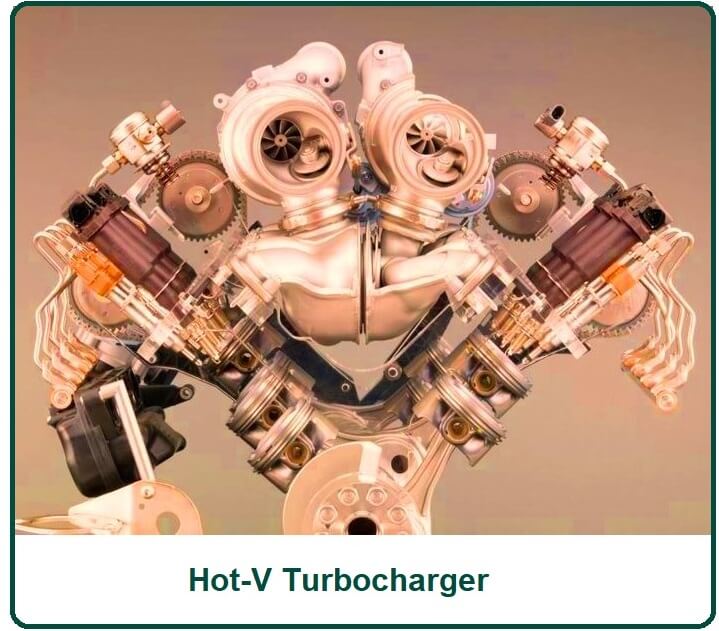 This minimizes heat build-up in the then charged air and significantly reduces the cooling load of the intercooler. Mercedes-Benz was the firsts automaker to put the “Hot-V” setup into production. 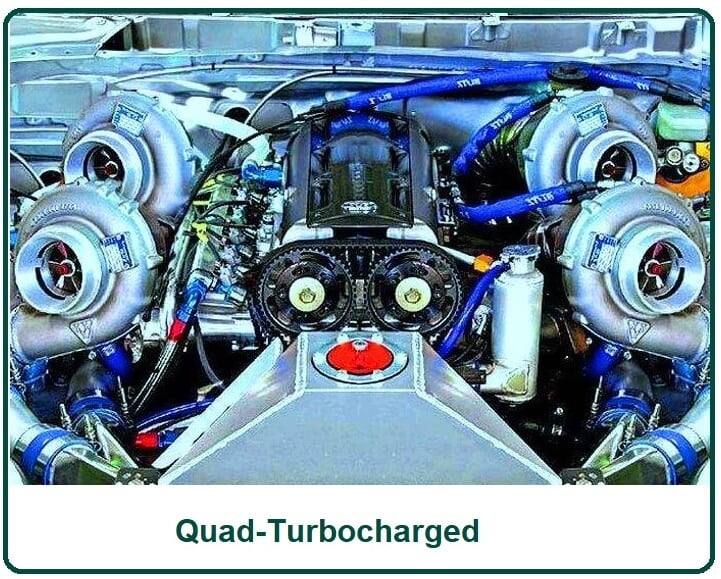 The Bugatti Chirons are the only production car that uses a quad-turbocharged setup. Bugatti combines two big turbos and two small turbos with an 8.0-liter W16 engine that produces a total of 1,500 horsepower. According to the person who took it to 304 mph, that’s a rush. 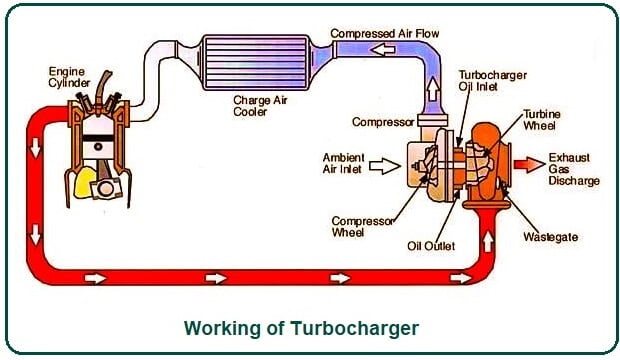 The gases from the engine flow along the exhaust manifold and through the nozzle box assembly and enter the blades of the gas turbine, where mechanical work is performed by the gas turbine. ™ As the turbine spins at high speed, it causes the compressor to compress the atmospheric air of a diesel engine or air-fuel mixture in the case of a petrol engine and enter the engine cylinder.

In both systems, air enters throughs air intakes, passes through an air cleaner, & travels through a duct usually funnel-shaped to the compressor inlet portion of the turbocharger. From there, the air is sent through a diffuser to individual cylinders in the intake manifold. The most important problem is controlling the manifold or boost pressure.

This is the amount of extra boost or pressure created by the turbocharger. Boost musts are controlled, or the engines will start to explode and eventually burn holes in the pistons and self-destruct. The solution lies in the wastegates or safety valves, which are critical for manifold pressure, exhaust pressure, or a combination of both.

At a predetermined pressure, the wastegate valve will open, allowing some of the exhaust gas to bypass the turbocharger and go directly into the exhaust system. This keeps intakes manifold pressure at presets maximum. The turbochargers themselves spin at a maximum speed of approximately 110,000 rpm at highway speeds and are capable of supplying boost pressures of up to 60–70 psi (413–483kPa) on professional racing engines.

Here, the different advantages of turbochargers are as follows

Here, the different disadvantages of turbochargers are as follows

The turbocharger on a car applies a very similar principle to a piston engine. It uses the exhaust gas to drive a turbine. This spins an air compressor that pushes extra air (and oxygen) into the cylinders, allowing them to burn more fuel each second.

How Does a Turbocharger Work?

A turbocharger is a system that helps an engine produce more power and torque through forced induction. Essentially, a turbo sucks in air, chills it, and then force-feeds the engine more air than what it would get through its standard intake.

It uses the exhaust gas to drive a turbine. This spins an air compressor that pushes extra air (and oxygen) into the cylinders, allowing them to burn more fuel each second. That’s why a turbocharged car can produce more power (which is another way of saying “more energy per second”).

They have greater power density and they are more efficient, the latter of which might mean more to more people. Basically, a turbocharger is connected to an engine to give it more power. This allows smaller engines to put out more horsepower and torque than they ordinarily would.