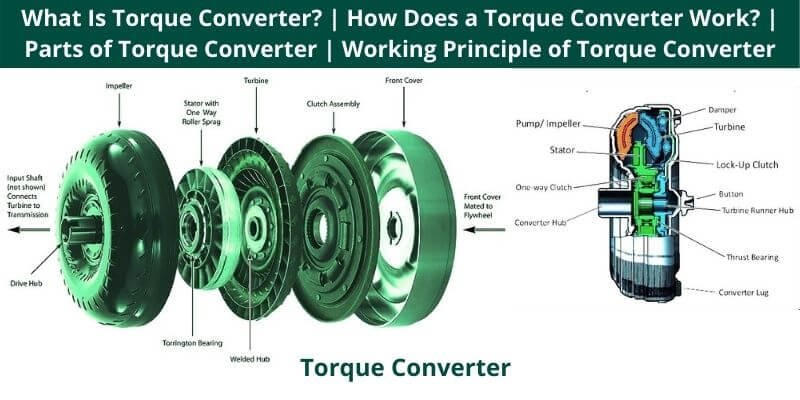 What Is Torque Converter?

Torque converters are types of fluid coupling that transfer rotational power from a prime mover to a rotating driven load, like in an internal combustion engine. In a vehicle with automatics transmissions, the torque converter connects the power source to the load.

Torque converters are doughnut-shaped internal engine component that is directly connected between the engine and transmission. Inside the torque converter, there are two series of curved blades, each facing the opposite direction.

Essentially an advanced hydraulics fluid coupling, the torque converters transmit and multiplies engines torques while allowing the vehicles to come to a fulls stop without touching or moving the transmission. Earlier cars used non-locking torque converters, but most modern vehicles use lock-up torque converters.

The lock-up torque converter has a built-in locking clutch mechanism. Once the transmissions sense a specific speed or engine RPM, the torque converters will use the clutches to lock indirect connections between the inputs & output shafts for better efficiency.

Before the lock-up clutch was invented to maximize efficiency, we originally accepted the energy loss that occurs during the transfers of powers betweens the engines & transmissions due to slippage. Without the clutch to lock the torque converter, the turbine can still spin about 90 percent as fast as the impeller, but they don’t reach the same speed. Thus, energy loss.

How Does a Torque Converter Work?

It is a bit difficult to understand how a fluid can provide the power to move an object such as a vehicle. A pump helps achieve torque control which works by circulating fluid around the torques converters, which is determined by the rotation of the crankshafts.

Turbines are located in the housing and rotate when the pumped fluid comes into contact with the turbine blades. In this way, the torque being transmitted to the transmission through the input shaft can be measured. The torque converter housing is attached to the flywheel and rotates in the turbine housing at the same speed as the crankshaft.

The impeller or centrifugal pump effectively thrusts the transmission fluid into the ribs of the turbine, which in turn rotates or transmits torque to the transmission. The stator is the barrier that forces the fluid back to the turbine instead of the pump, increasing the efficiency of the system.

It is important to note that the internals of the torque converter is still a mystery. Basic mechanics can be understood, but the complex calculations and engineering behind it are best understood by someone with an advanced understanding of fluid mechanics. 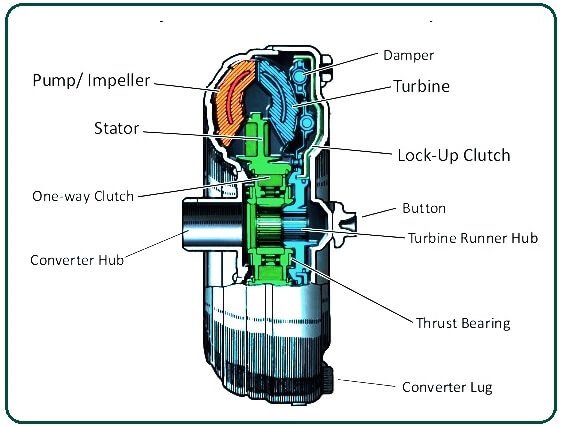 Impellers are connected to the housing and the engine shaft. It has curved and angled vanes. It spins with the engine speed and has automatic transmission fluid. When it rotates with the engines, the centrifugal force moves the fluid outwards.

The blades of the impellers are designed in such a way that it directs the fluid towards the turbine blades. It acts as a centrifugal pump that sucks the fluid out of the automatic transmission & delivers it to the turbine.

The turbines are connected to the transmission system of the vehicles. And the stator is placed between the impeller and the turbine.

The turbine is connected to the input shafts of the automatic transmission. It is present on the side of the engine. It also has curved and angled blades. The blades of the turbines are designed in such a way that they can completely change the direction of the fluid falling on its blades. 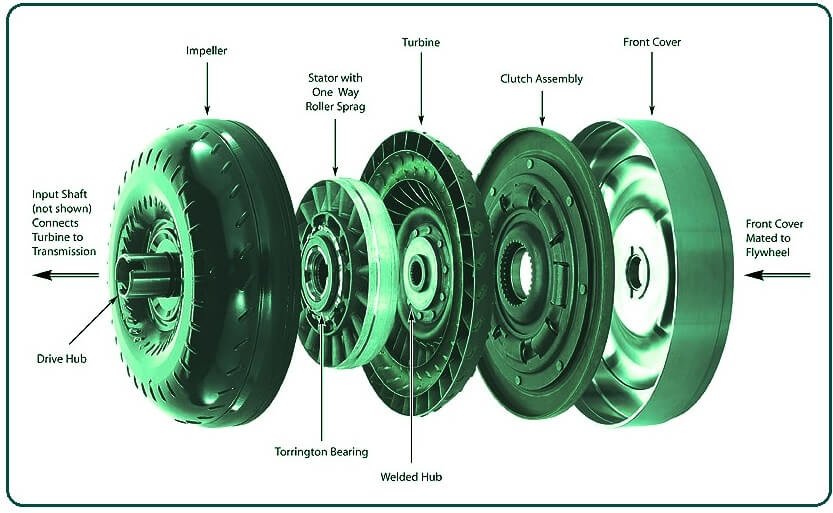 As it strikes the blades of the turbines, the turbine starts rotating. This rotates the transmission system and moves the wheels of the vehicle. When the engine is stopped, the turbine also stops spinning, but the impeller attached to the engine continues and does not kill the engine.

It has three phases of operation

During the vehicle’s stall condition, the engine is applying power to the impeller, but the turbine cannot spin. These occur when the vehicles are stationary, and the driver has put his foot on the brakes pedals to prevents it from moving forward.

The maximum multiplication of torque occurs during this condition. A driver takes his foot off the brakes pedals & depresses the accelerator pedal, the impeller begins to accelerate, and this sets the turbine to run.

In these situations, there are big differences between the speed of the pump and the turbine. The impeller speed is much higher than the turbine speed.

This keeps the turbine and impeller moving at the same speed. The lock-up clutches engage only when the coupling points are achieved. During coupling, the stator also begins to rotate in the direction of the impeller and turbine rotation.

Depending on the models, single-stage torques converters have a variety of capabilities: Simplex single-stage converters with PTO drives are ideals for applications with power-shift transmissions and driving-assisted hydraulic pumps.

Three-stage torque converters employ three rings of turbines blades, as wells as two sets of reactors or stator blades. The effect of these designs is increased torque – up to five times the amount of engines output torque, in fact, when the engines are at a stall.

More of the above symptoms, your torque converter may not be working properly. Repairs can cost more than replacing them. Therefore it is necessary to see a mechanic/technician. If you plan to do the work yourself, the estimated repair cost is between $150 and $500. Repair shops charge between $600 and $1000 to replace a torque converter.

The torque converter itself is relatively inexpensive (between $150 and $350 depending on the vehicle), but it takes 5 to 10 hours of work because the transmission would have to be removed to replace the torque converter. Also, the fluid should be flushed/changed, which may or may not be included in the price the store will give you.