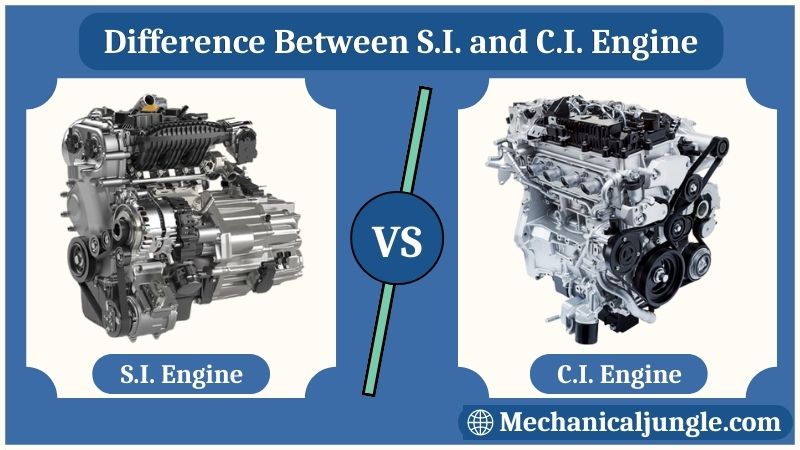 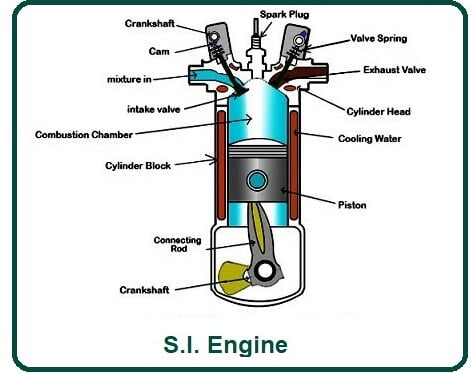 The Spark Ignition Engines is a petrol engine often used on commercial vehicles such as scooters, motorcycles, cars, etc. It produces less noise and vibration, is easier to start, requires less maintenance, and has lighter weight. In their definition, we can say that S.I. engines are internal combustion engines that operate on the principle of spark ignition (which is to create a spark with a spark plug).

It uses petrol and fresh air to complete the Otto cycle. The four-stroke petrol engine performs the work cycle in four stages. During that time, the crankshaft takes two turns. The first cycle is intake – the clip goes from TDC (top dead center) to BDC (bottom dead center), and the suctions valve starts to open before the piston reaches TDC and closes after the piston passes the BDC position.

A pressure of 0.7–0.9 bar is produced in the cylinder, which, through an open valve, draws a freshly worked mixture that is mixed into the cylinder with the remaining combustion products from the previous process. During compressions, the clip moves to TDC and compresses the gases in the cylinder. Pressure increases from 11 to 18 bar and temperature from 400 to 600 0C. The piston-cylinder starts to reduce chamber space.

Both cylinder valves are closed, and fuel and air compression is performed. Combustion starts before TDC and lasts until BDC. Compression ratio values ​​range from 6 to 11. During expansions, the compressed fuel and air mixture is ignited by an electric high-voltage spark plug just before the piston returns to the TDC position.

The combustion gases have a pressure of 1.05 to 1.20 bar. Depending on the cylinder charge, the pressure at the front and rear of the exhaust may be above critical, & a good part of the gas is ejected due to the pressure difference. The high pressure and temperature in the engine cylinder represent an important precondition for achieving high efficiency. At full engine powers, the exhaust gas temperature is about 700–1000 C. 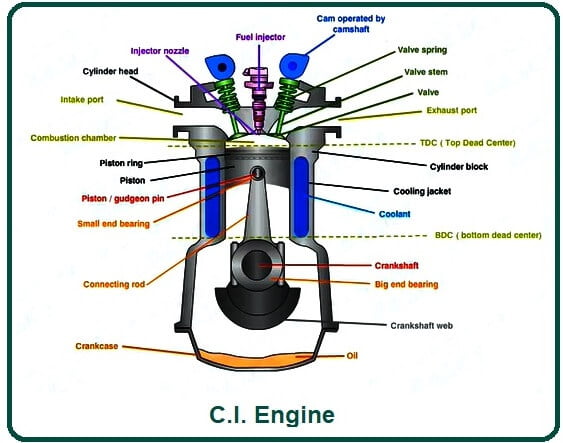 The compression ignition engine is a diesel engine used in heavy vehicles, machinery, railways, ships, trucks, and equipment. In the combustion process, unlike the SI engine, only air enters the cylinder during the suction stroke, which allows both air and fuel to enter. It ignites diesel fuel with compressed hot air. CI engine is also internal combustion engines that use diesel fuel to run on a diesel cycle.

In the system, the spark plug is terminated because the spark does not require combustion. The combustion is accomplished by compressing the air purified in the cylinder, which is then compressed to a warm temperature to ignite when the fuel is injected. This system has a high compression ratio due to the high ignition temperature of diesel fuel.

Higher compression ratios produce more power. Incomplete combustion produces more hydrocarbons, causing air pollution from the exhaust. The first phase (intake) begins by opening the suction valve. The clip moves from TDC to BDC, causing the pressure in the cylinder to rise as the volume increases above the piston so that the actual cylinder pressure is 0.7 – 0.85 bar during the suction time. In the case of the turbocharged engine, it is up to 2 times.

The second stroke (compressions) begins by closing the suction valve & ends at TDC. The capacity of the injected working medium in the compression chamber is reduced by 14 to 24 times. The air pressure at the end of compression is 30 – 60 bar, and its temperature is 600 – 9000C. After compression of air, expansion begins, and fuel is injected into the cylinder with pressures of 90 – 2000 bar, depending on injection devices.

The fuel is dispersed, heated, mixed with air, & ignites. During combustion, the temperatures rise to 2000 – 25000C & the pressure to 60 – 120 bar. In this trick, the piston mechanism has maximum mechanical and thermal stresses. During expansion, the clip is changed from BDC to TDC, thus the clearance of the cylinder through the exhaust valve. The pressure at which exhaust gases pass is 1.05 to 1.20 bar. The temperature of the gases is 500 – 6000C.

Difference Between S.I. and C.I. Engine:

What Is Spark Ignition?

A spark ignition (SI) engine is an internal combustion engine, usually a gasoline engine, in which the combustion process of the air-fuel mixture is ignited by a spark from a spark plug.

What Is Compression Ignition Engine?

In a compression ignition engine, only air or air plus residual combustion gases from the exhaust, known as exhaust gas recirculation (EGR), is inducted into the chamber during the intake stroke and compressed during the compression stroke.

Difference Between SI and CI Engine

In the SI engine, ignition is induced by sparks generated by spark plugs, where the operation cycle is adjusted to the engine speed and load using mechanical or computer-controlled ignition systems.

A CI engine is an engine in which the fuel charge is ignited by the heat of compression. The process of combustion in the CI engine is fundamentally different from that in a spark-ignition engine.