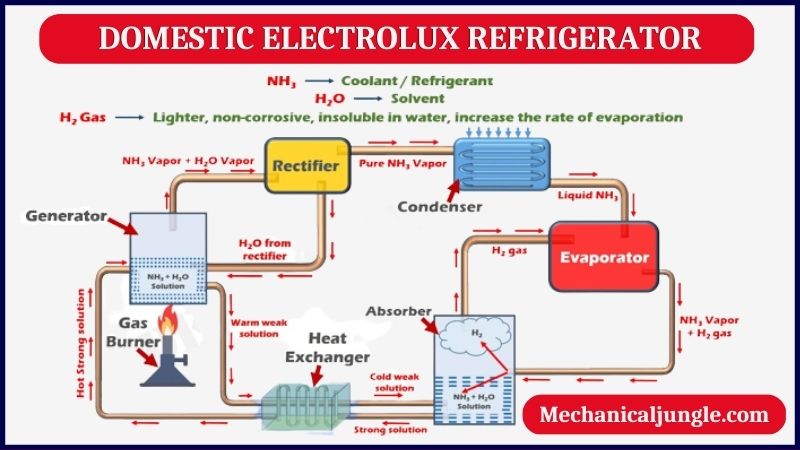 What Is Domestic Electrolux Refrigerator: 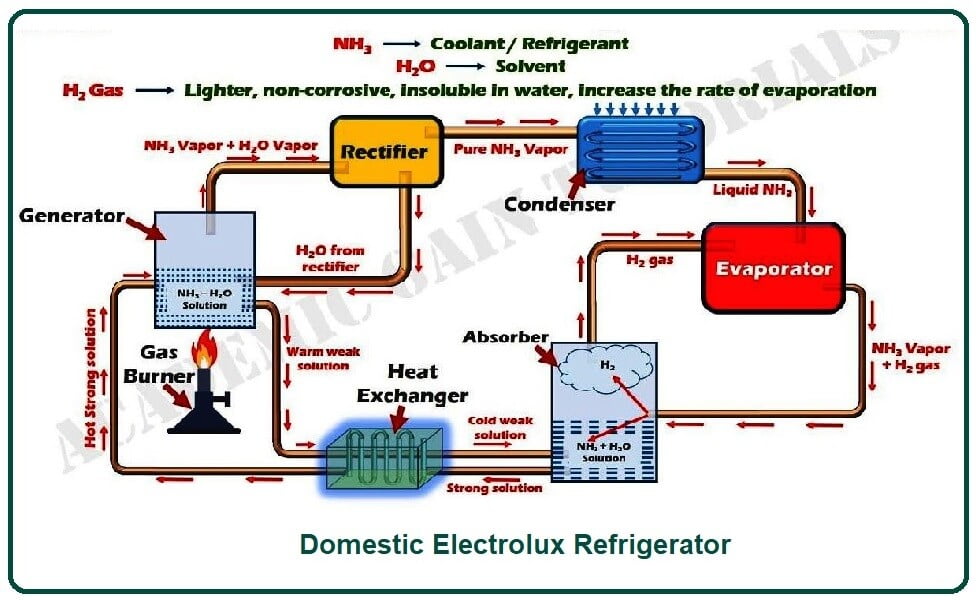 There are seven different components of a Domestic Electrolux Refrigerator are: –

The principle involved uses the properties of the gas – vapor mixture. If a liquid is in contact with an inert atmosphere, it will evaporate until the atmosphere is saturated with the vapor of the liquid.

This evaporation requires heat that is derived from the environment in which evaporation occurs. Thus a cooling effect is produced. The partial pressure of the refrigerant vapor (ammonia in this case) should be lower in the evaporator and higher in the condenser.

The total pressure across the circuit must be constant so that the only movement of the convection fluid is by convection currents. By concentrating hydrogen in those parts, the partial pressure of ammonia in the required parts of the circuit is kept low. 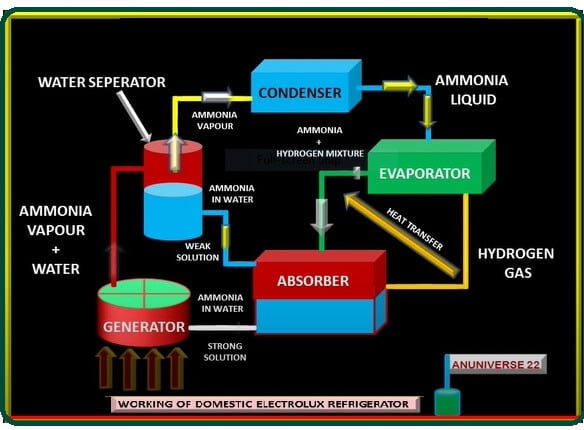 The ammonia leaving the condenser enters the liquid evaporator and evaporates into hydrogen at a lower temperature corresponding to its lower partial pressure.

A mixture of ammonia and hydrogen goes into the absorber, in which water is also poured from the separator. The water absorbs ammonia and returns to the hydrogen evaporator.

Water separates with the vapor, and a weak solution of ammonia is passed back to the absorber, thus completing the water circuit. Ammonia rises from the vapor separator into the condenser, where it condenses and then returns to the evaporator.
The actual plant includes refinements and practical modifications (which are not included here).

The following points are worth noting:

The presence of hydrogen makes it possible to maintain a uniform total pressure throughout the system as well as allow the refrigerant to evaporate to a lower temperature in the evaporator corresponding to its partial pressure.

Thus the condenser and evaporator pressure of the refrigerant is maintained as follows:

These are obtained without the use of pumps or valves.

The Electrolux refrigerator is one of the world’s most popular appliances, created in 1928 in Stockholm, Sweden you are not always out to purchase an Electrolux French door refrigerator, but sometimes you have to buy one.

In the Electrolux refrigeration system, NH3 gas coming out from the boiler is passed through the rectifier or water separator and then to the condenser. The liquid of the refrigerant gravitates to a u-shape trap filled with liquid NH3 to prevent the entry of H2 to the condenser and then enters the evaporator.

Refrigeration Components There are certainly other components in most loops, but most would agree the four fundamental elements of a basic cycle are as follows:

Refrigerators work by causing the refrigerant circulating inside them to change from a liquid into a gas. This process, called evaporation, cools the surrounding area and produces the desired effect. You can test this process for yourself by taking some alcohol and putting a drop or two on your skin.

A domestic refrigerator is an electrical appliance used in many households for keeping foods cool enough so that they won’t spoil.