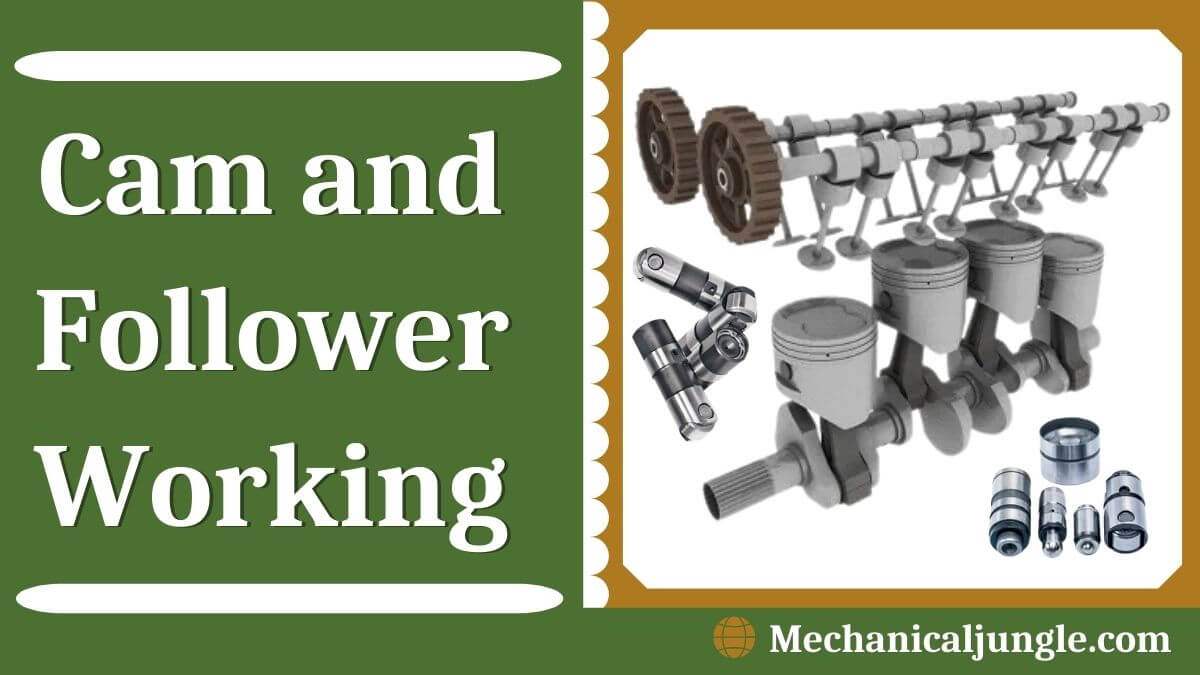 What Are Cam And Follower?

Cam follower is components that are internally attached to a cam. Cams exist in many applications dishwashers, sprinklers, etc.—but the most famous example is the camshaft in a car. The goal of a cam is to convert rotary motion into linear motion.

There are several types of cams, including cylindrical and plate varieties. Without a cam follower, a cam would not be of much use, as the cams must make contact with the followers to transfer the rotary motion into linear motion. Followers are built with special cam follower bearings to make this shifting possible.

Cam follower bearings, also known as track followers, can come in a variety of designs but are usually made with an extra thick outer ring. This design allows cam follower bearings to handle high radial loads while accepting extreme shock loads without the risk of fracturing a softcore part, depending on the application.

This pair of high links are used to move links spontaneously or periodically. However, cam and follower mechanisms are also used by engineers to ensure zero or minimum degree of error. In the 3rd century, a device known as the cam was produced by Hellenistic water-powered automata. Also, that device was found in the 4th century al-Jazari design.

Cam and follower mechanisms are mostly used to drive valves in I.C. engines. In addition, the mechanism is often used by engineers as a part of the I.C.E.s Timing System Can and Follower: Definition, Types, Working Principle and Application  Written by Buxin Principle of Machinery In mechanical engineering, engineers often use a high pair link mechanism known as a cam and follower mechanism.

This pair of high links are used to move links spontaneously or periodically. However, cam and follower mechanisms are also used by engineers to ensure zero or minimum degree of error. In the 3rd century, a device known as the cam was produced by Hellenistic water-powered automata.

Also, that device was found in the 4th century al-Jazari design. Cam and follower mechanisms are mostly used to drive valves in I.C. engines. In addition, the mechanism is often used by engineers as a part of the I.C.E.s timing system. In addition, cam-follower mechanisms are used to drive fuel pumps in the automotive industry. Also, when multiple cams are included within the same shaft, it is called a camshaft.

In an IC engine, the valves have to be kept open; First, then turn it off and keep it closed; all these time operations can be set easily by a cam-follower mechanism. In the case of linkages, we study planar linkages or two-dimensional linkages, and more.

Also, Read: What Is a Vehicle? | Parts of Vehicle | Regular Maintenance | Proper Driving

The disc or plate cam is a type of cam in which the follower moves radially from the center of rotations of the cam. This cam is very popular due to its simple design & compactness, which can be fitted in remote locations. Disc or plate cams have applications in IC engines and machine tools. 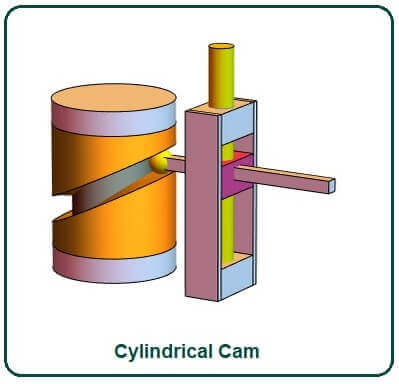 The other has a cylinder as the working surface. In this type of cam, the spring-loaded follower translates into a cylinder rotating along the parallel axis. 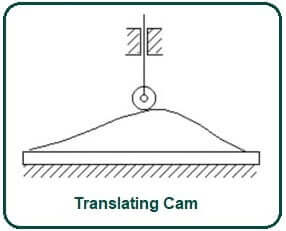 A translating cam is a type of cam in which the cam can rotate in a horizontal plane. The follower is also attached, in which the motion is interrupted with the help of a spring. Sometimes groove cams are used in which follower motion is achieved without the use of a spring. 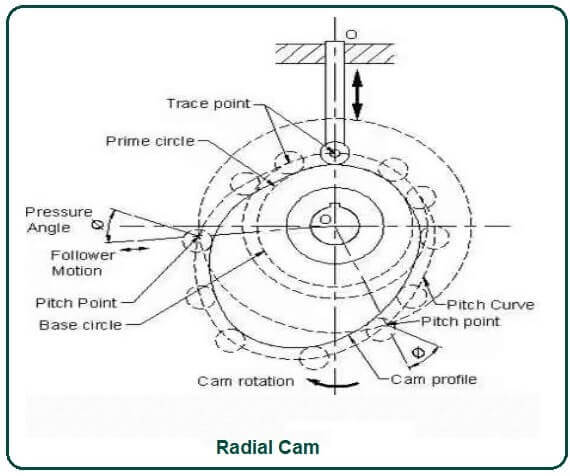 A body with this profile is called a cam. It consists of a fixed link with an inverted pair which is the foundation or fixed link. Cam is the link of revolution. There is a revolute pair between the fixed link and the cam, and the output link is the follower. 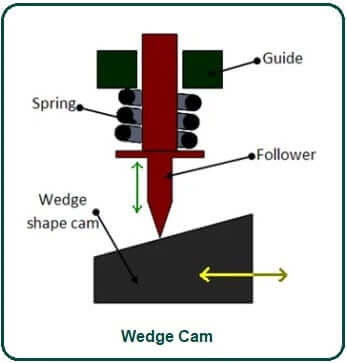 If the cam has linear motion, we call it a wedge cam. Wedge cams have a four-link mechanism, the first being a fixed link, the second link being what looks like a cam wedge. It depends on the contours of this wedge; as this cam oscillates in the horizontal direction, the follower will oscillate in the vertical direction along with this prismatic pair or this guide.

What Is a Follower?

The follower is a translating or oscillating mechanical member that follows the movement of the cam. It may touch the surface profile of the cam or may be spring-loaded. It may have a uniform velocity or a uniform acceleration speed. With the help of trailing motion, complex output motion can be obtained.

If it has a slight offset, it means that the axis of translation of the follower does not pass through the cam center, then we call it to offset translation follower. 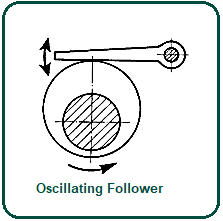 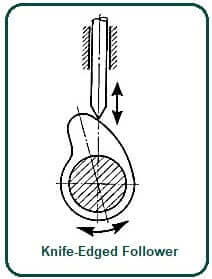 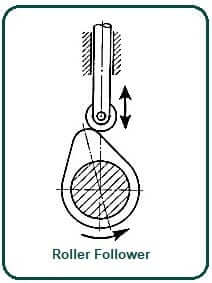 The follower is hinged to a roller and is in contact with the roller cam; this is called a roller follower. It is the cam that spins, and the follower that is on here oscillates. It is used when a large power has to be transmitted like in stationary IC engines.

If there is not enough room to use a larger roller because this pin must be sufficiently large to transmit force between the cam and the follower, and the roller must be at least twice as large as the pin, then the roller requires a lot of space. 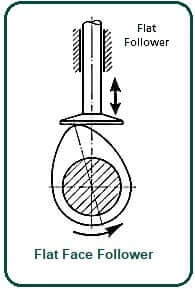 The follower surface that is in contact with the cam as a flat surface is called a flat face follower. The trailing surface may also be a curved surface rather than a plane. It is the cam that rotates and the follower that rests here that oscillates, so it is called a curved face.

If space is limited, then we can use a flat face follower if the force involved is not very large as we did in the case of automobiles.

If it is a flat face follower, the tracepoint we use is the point on the face of the follower that is in contact with the cam surface when the follower is at one of the extreme positions; we usually use that extreme—position when follower to nearest cam center.

It serves a general force X direction and serves as a common force Y direction and two normal force balancing Cocking moment, the moment due to the force Fn. The frictional force that would try to oppose this vertical motion would be μ times the normal force. N as normal force, then it will μN. During the upward movement, the follower does not only have to overcome these two friction forces but to get rid of the spring force.

When designing a cam-follower system, translating follower is not jammed into its prismatic guide. The oscillating follower has very little chance of a restriction on its motion.

Application of Cam and Follower:

There are lots of applications for cams and followers as mentioned below:

What Is a Cam Follower?

In mechanical engineering, a cam follower, also known as a track follower, is a specialized type of roller or needle bearing designed to follow cam lobe profiles.

Cam is a mechanical element that is used to deliver the reciprocating or oscillating motion to another machine element known as a follower.

A cam and follower mechanism is a profiled shape mounted on a shaft that causes a lever or follower to move. Cam and follower are used to converting rotary motion into linear (reciprocating) motion.

A cam and follower mechanism is a profiled shape mounted on a shaft that causes a lever or follower to move. Cams are used to convert rotary to linear (reciprocating) motion. As the cam rotates, the follower rises and falls in a process known as reciprocating motion.

The cam and follower mechanism is widely used for operating the inlet and exhaust valves of internal combustion engines. They are used in wall clocks and the feed mechanism of automatic lathe machines. They are also used in paper cutting machines and weaving textile machinery.

Two major types of camshafts exist flat tappet and roller. Within those categories are two options: solid or hydraulic—four variations in all. Tappets ride against the camshaft lobes—their movements open and close the valves.

Where Is a Cam and Follower Used

Cam and follower mechanisms are mostly used to drive valves in I.C. engines. In addition, the mechanism is often used by engineers as a part of the I.C.E.s timing system.