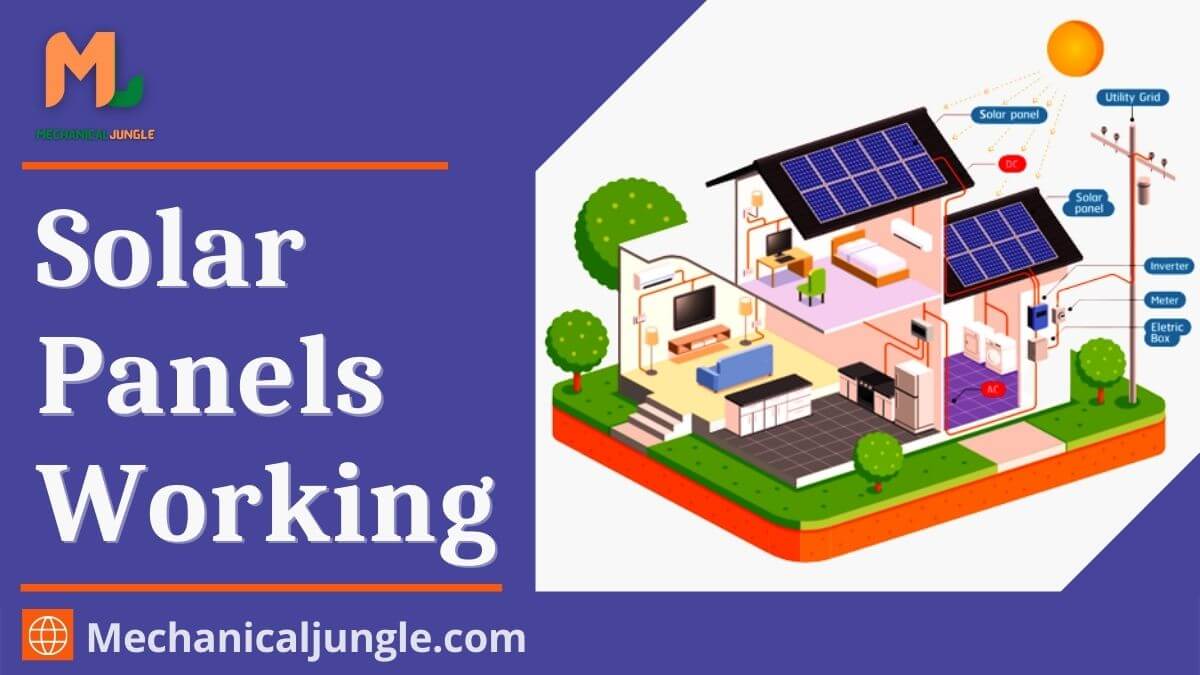 What Is a Solar Panel? 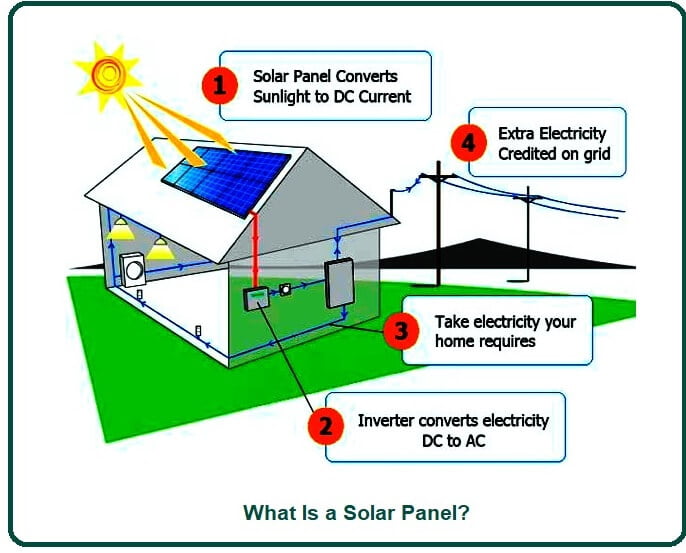 The development of solar energy goes back over 100 years. In the early days, solar energy was mainly used for the production of steam which could then be used to drive machinery. But it was not until the “photovoltaic effect” was discovered by Edmund Beckerell that it would allow sunlight to turn into solar energy. The discovery of Becquerel led to the invention by Charles Fritts of the first real solar cells in 1893, which were made by coating sheets of selenium with a thin layer of gold.

And from this humble beginning, we will be able to know the device that we know today as a solar panel. In 1941, Russell Ohl, an American inventor, patented the world’s first silicon solar cell on the payroll of Bell Laboratories. Ohl’s invention produced the first solar panel in 1954 by the same company. The solar panel found its first mainstream use in space satellites. Solar energy begins with the SunSun.

The solar panel (also known as “P.V. panels”) are used to convert light from the SunSun, which is made up of particles of energy called “photons,” into electricity that is used by electric loads. It can be done to do. The solar panel can be used for a wide variety of applications, including cabins, telecommunications equipment, remote sensing, and of course, remote power systems for the production of electricity by residential and commercial solar electric systems.

Solar panels (also known as photovoltaic cell or P.V. panel) is defined as an electrical device that converts light energy into electricals energy through a photovoltaic effect. A solar cell is basically a P-N junctions diode. Solar cells are a form of photoelectric cell, defined as devices whose electricals characteristics – such as currents, voltage, or resistance – differ when exposed to light.

Individual solars cells can be combined to form modules known as solar panels. Common single-junction silicon solar panels can produce maximum open-circuit voltages of about 0.5 to 0.6 volts. By itself, this is not too much – but remember that these solar cells are small. When added to a large solar panel, a considerable amount of renewable energy can be generated.

How Do Solar Panels Work?

Solar panels collect clean, renewables energy in the form of sunlight & convert that light into electricity that can then be used to provide electricity for electric loads. Solar panels are made up of several individual solar cells that are themselves made up of layers of silicon, phosphorus (which provides a negative charge), and boron (which provides a positive charge). Solar panels absorb photons and, in doing so, initiate an electric current.

The energy generated from the photons breaking the surface of the solar panel allows electrons to be knocked out of their atomic orbitals and released into the electric field generated by the solar cells, which then pulls these free electrons into directional currents. This entires process is known as the photovoltaic effect.

The required number of solar panels in an average home requires additional electricity to supply all of its electricity to produce more solar energy than a sufficient rooftop area, thereby shutting down electricity usage on the main power grid.

In a well-balanced grid-connected configuration, a solars array generates electricity during the day, which is then used at home at night. Net metering programs allow solars generator owners to pay if their system generates excess electricity in the home. In off-grid solar applications, a battery bank, charge controller, & in most cases, an inverter are essential components. Solar arrays send direct current (D.C.) electricity to the battery bank via a charge controller.

Power is then drawn from the batteries bank to the inverters, which converts the D.C. currents into an alternating current (A.C.), which can be used for non-DC equipment. Aided by an inverter, solar panel arrays can be sized to meet the most demanding electrical load requirements.

Main Components of the Solar Panel: 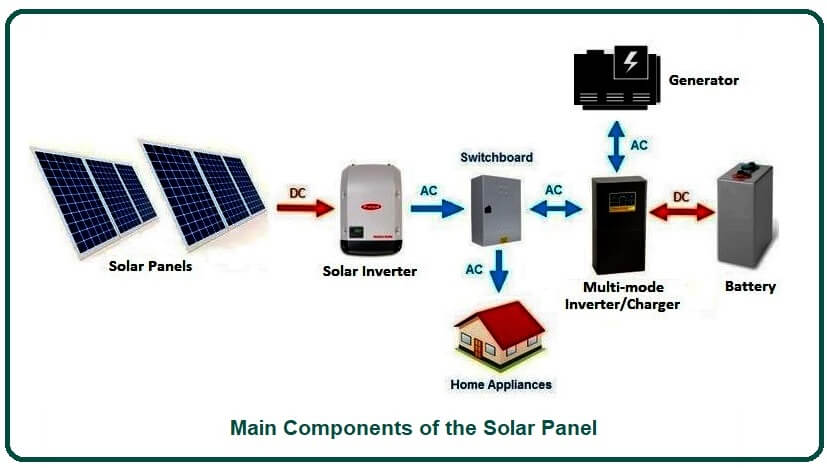 It is the heart of solar power plants. A solar panel consists of several solar cells. We have found about 35 solar cells in one panel. The energy produced by each solars cell is very small, but combining the energy of 35 of them gave us enough energy to charge a 12-volt battery.

It is an energy-generating unit made of P-type and N-type silicon semiconductors. It is the heart of solar power plants.

Batteries are used to return the energy produced during the day or to store excess energy supplied during the night.

Solar panels produce a direct current that needs to be converted into alternating current to supply to homes or the power grid.

When the light reaches the p-n junction, light photons can easily enter the junction through a very thin p-type layer. Light energies, in the form of photons, supply enough energy to the junction to form many electron-hole pairs. The incident light breaks the thermal equilibrium state of the junction. Free electrons in the depletion regions can quickly move to the n-type of the junction.

The construction of the solar cell is shown below. The apical layer of this cell consists of an anti-reflective cover glass. This glass protects semiconductor materials against sunlight. In this cell, small grid patterns with slight metal stripes are available under the glass. So that the top layer of these cells can be made using glass, metal strips, and anti-reflective coatings.

The most important part of the cells in the middle layer, where solars energy can be formed by the effect of photovoltaic. It consists of two semiconductor layers composed of p-type & n-type materials. The base layers of these cells consist of two parts.

A rear metallic electrode is below the P-type semiconductor and works with metallic grids to generate an electric current in the pinnacle layers. Solar cells are basically a junction diode, although their constructions are slightly different from a conventional P-N junction diode.

We also provide a current collecting electrode under the N-type layer. We surround the entire assembly with thin glass to protect the solar panel from any mechanical shocks. 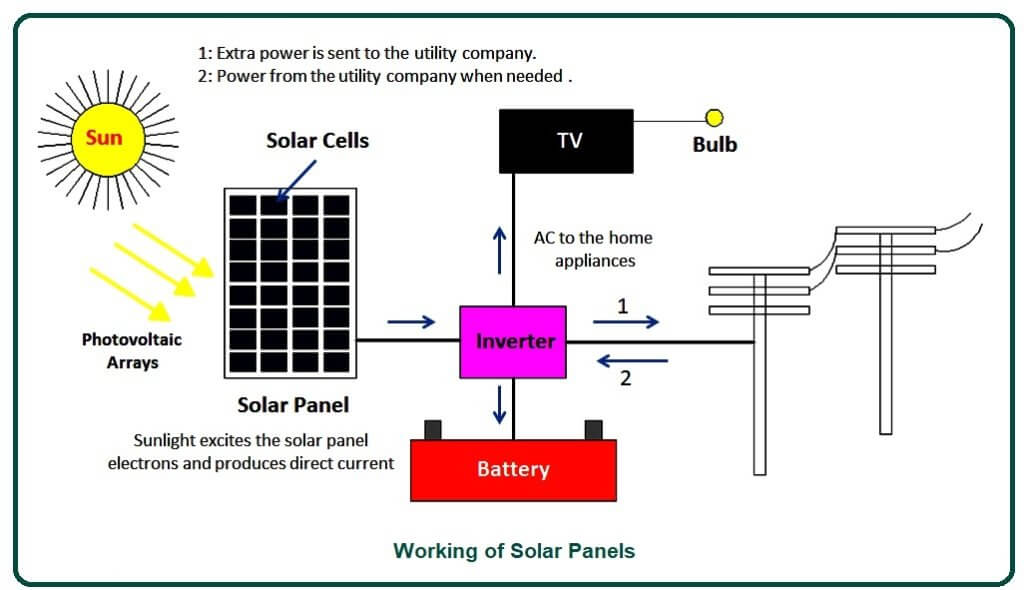 Once the solar energy falls on the solar panel, it is absorbed. Each panel of a solar panel includes a semiconductor material to combine the properties of the insulator and metals. So it makes light energy to be converted into electricity. Once the energy from the sun falls on the panel, a semiconductor is absorbed, the energies of the photons are transferred to electrons and allow the flow of electrons through the material, like an electric current.

As sunlight falls on the solar cell, a large number of photons hit the P-silicon region. After absorbing the energy of the photon, the electron and hole pair will separate. The electron moves from the p-type field to the n-type field due to the action of the electric field at the p-n junction.

In addition, the diode is reversed to increase this electric field. So this current starts flowing in the circuits for individual solar cells. We combine the current of all solar cells in a solar panel to achieve a significant output. In solar power plants, a large number of solar panels are interconnected to achieve large voltage outputs.

The electricals energy coming from the combined effort of the solar panels is supplied to the lithium-ion battery at night when there is no sunlight.

The advantages of solar cells include the following.

Here, the different disadvantages of solar panels are as follows

Here, the different applications of solar panels are as follows

Components of a Solar Panel

The basic raw material of a solar panel is pure silicon. However, the outer frame enclosing an array of solar cells in each solar panel is made of glass. The glass must be highly transparent to allow the sunlight to penetrate the frame.

The Latest. Our solar system consists of our star, the Sun, and everything bound to it by gravity – the planets Mercury, Venus, Earth, Mars, Jupiter, Saturn, Uranus, and Neptune; dwarf planets such as Pluto; dozens of moons; and millions of asteroids, comets, and meteoroids.

How Do Solar Panels Work?

When the sun shines onto a solar panel, energy from the sunlight is absorbed by the PV cells in the panel. This energy creates electrical charges that move in response to an internal electric field in the cell, causing electricity to flow.

What Are the Components of Solar Panels?

A standard solar panel consists of a layer of silicon cells, a metal frame, a glass casing, and various wiring to allow current to flow from the silicon cells. Silicon is a nonmetal with conductive properties that allow it to absorb and convert sunlight into electricity.