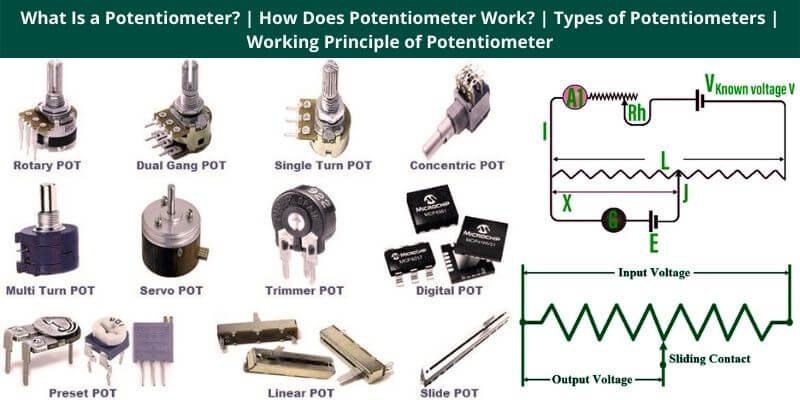 What Is a Potentiometer? 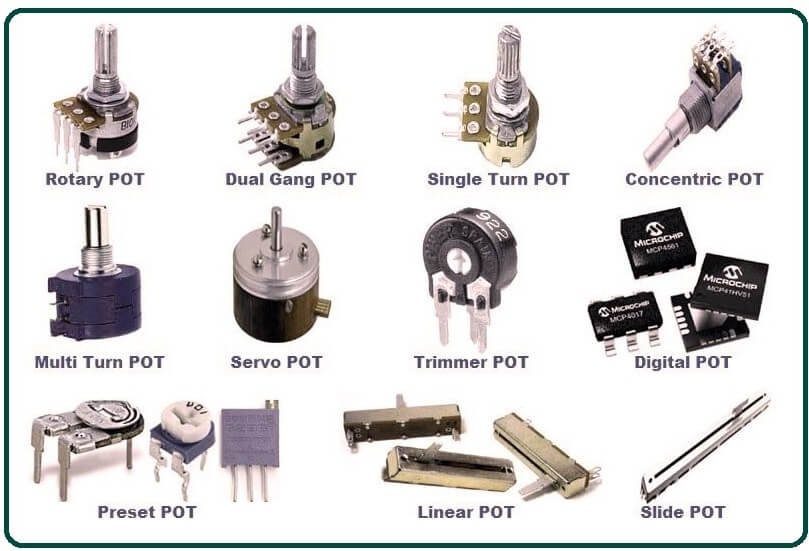 A potentiometer, also known as a POT, is a variable resistor with three terminals. This resistor has an adjustable voltage that you can manually change to control the electric current. This is all controlled with respect to Ohm’s law.

The potentiometer symbol is a rectangle or zigzag line placed between two linear lines. The most well-known potentiometer application is in audio systems for changing the volume or other characteristics of an audio signal.

The potentiometer essentially acts as a variable resistance divider. The resistive element can be viewed as two resistors in series total potentiometer resistance, where the position of the wiper determines the resistance ratio of the first resistor to the second resistor.

If reference voltages are applied to the end terminals, the position of the wiper determines the output voltage of the potentiometer. A potentiometer is also commonly referred to as a potmeter or pot. The most common form of potmeter is the single-turn rotary potmeter.

This type of pot is often used for audio volume control logarithmic taper as well as in many other applications. Various materials are used to manufacture potentiometers, including carbon composition, cermet, wirewound, conductive plastic, or metal film.

How Does Potentiometer Work?

Potentiometers (or) POT is a passive electronics component consisting of two end terminals with a resistive element and a sliding contact called a wiper that serves as the third terminal.

The input voltages will be applied to the resistor, where the output voltage will be a drop in voltage between the fixed & sliding contacts, as shown below.

They are used to help accurately measure voltage and obtain a variable voltage from a fixed voltage source.

Common examples of potentiometers are:

A potentiometer is also commonly referred to as a pot. These potentiometers have three terminal connections. One terminal is connected to a sliding contact called a wiper, and the other two terminals are connected to fixed resistance tracks. wipers can be moved along the resistive track using either linear sliding controls or a rotary “wiper” contact.

The basic operation of both rotary and linear controls is the same. The most common form of the potentiometers is the single-turn rotary potentiometer. These types of potentiometers are often used in audio volume control logarithmic tapers as well as many other applications.

These are the most common type of potentiometer, where the wiper moves along a circular path. These potentiometers are mainly used to obtain variable voltage supply across a portion of the circuit.  The best examples of this rotary potentiometer are the volume controller of a radio transistor, where the rotating knob controls the current supply towards the amplifier.

This type of potentiometer includes two terminal contacts where a coherent resistance can be located in a semi-circular model.

Its voltage can be obtained between two contacts of resistance and sliding. This potentiometer is used wherever level voltage control is required.

This type of potentiometer is mostly used for calculating the voltage in the circuit. It is used to measure the internal resistance of a battery cell and is also used in mixing systems for sound and music equalizers.

There are different types of potentiometers available in the market, in which mechanical types are used to change the resistance as well as manually control the output of the device. However, a digital potentiometer is used to automatically change its resistance based on the given state.

This type of potentiometer works exactly like a potentiometer, and its resistance can be changed through digital communication like SPI, I2C instead of turning the knob directly.

These potentiometers are called POTs because of their POT-shaped structure. It includes three terminals, namely i/p, o/p, and GND, with a knob on its top. This knob acts as a control to control the resistance by rotating it in two directions, i.e. clockwise otherwise counterclockwise.

Digital Potentiometer, also called Digipot or Variable Resistors, is used to control analog signals using a microcontroller. This type of potentiometer gives an o/p resistance which is variable depending on the digital input.

Sometimes, these are also called RDAC (resistive digital-to-analog converters). This Digipot can be controlled by digital signals rather than a mechanical motion.

Each step of the resistor ladder includes a switch that is connected to the O/P terminal of the digital potentiometer. The ratio of resistance in the potentiometer can be determined through the step chosen at the top of the ladder.

Typically, these phases are indicated with a bit value, e.g. 8-bits is equal to 256 steps. This potentiometer uses digital protocols such as I²C for otherwise SPI bus Serial Peripheral Interface signaling.

Most of these potentiometers use only volatile memory so that once power down, they do not remember their location, and their final location can be stored via the FPGA or microcontroller to which they are connected.

The characteristics of potentiometers include the following.

Its fundamental working standard depends on whether the potential drop across any piece of wire is perpendiculars to the lengths of the wire if the wire has a uniform cross-sectional area and a constant current flows through it.

“When there is no expected difference between any two hubs, then-current flows.” At present, the potentiometer wire is actually a wire with high resistivity (ρ) with a uniform cross-sectional area A. Accordingly, it has a uniform opposition throughout the wire.

This potentiometer terminal connected to a phone of current high EMF, V (ignoring the opposition inside it) is called the driver cell or voltage source. Assume that the current through the potentiometer is I, and R is the all-around resistance of the potentiometer.

Then from Ohm’s law:

As ρ & A are always constant & current, I am kept constant by a rheostat.
So

Assume that a cell E with less emf than the conductor cell is connected in the circuit as indicated. Let this be EMF, E. The potentiometers have now become E in the potentiometers wire, let’s say at length x.

When this cell is connected to a suitable length (x) in the circuit shown above, no current will flow through the galvanometer as the potential difference is equal to zero. As a result, the galvanometer G exhibits zero detection.

The lengths (x) is then referred to as the length of the zero point. Now that you have a constant K and length x, you can solve the problem. We will be able to detect the mysterious EMF.

Difference Between Potentiometer and Voltmeter:

The main differences between the potentiometer and the voltmeter are discussed in the comparison table.

Also, Read: How Does a Condenser Work? | Different Types of Condensers

The main differences between rheostats and potentiometers are discussed in the comparison table.

Measurement of Voltage by Potentiometer:

The measurement of voltage in a circuit using a potentiometer is a very simple concept. In the circuits, the rheostat must be adjusted, and the current flow through the resistors can be adjusted so that for each unit, the length of the resistors, a precise voltage is dropped.

Once the galvanometer reaches its zero states, we have to note the position of the reading on the resistor scale, and based on that; we can find the voltages in the circuit. For betters understanding, we can adjust the voltage for each unit length of the resistor.

The advantages of a potentiometer include the following.

The disadvantages of a potentiometer include the following.