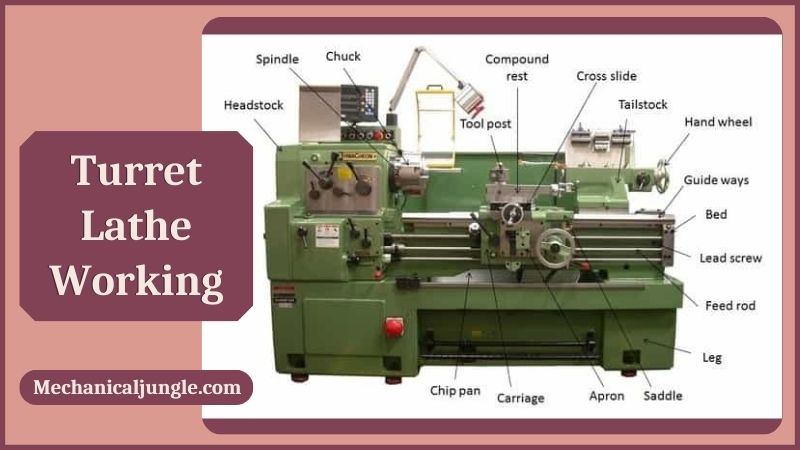 What Is Turret Lathe? 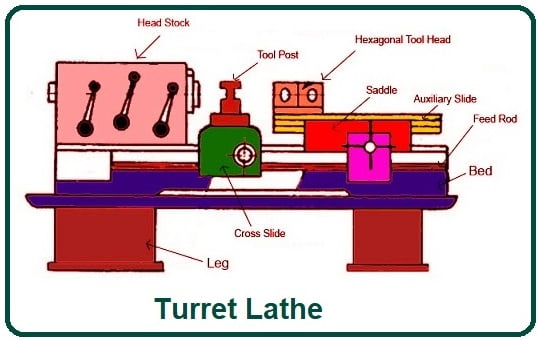 With the aid of a hexagonal turret, multiple cutting operations can be performed with a separate cutting tool in rapid succession without the need to replace or install and install the tool in a lathe machine. In the turret lathe, the tool can be switched automatically, resulting in faster and more efficient production processes.

The turret lathe can turn into a different cutting tool in a few seconds, but in a conventional lathe, it can take minutes for a human worker to manually change the cutting tool. When multiple operations are to be performed, and production is to be increased, the turret lathe is used. 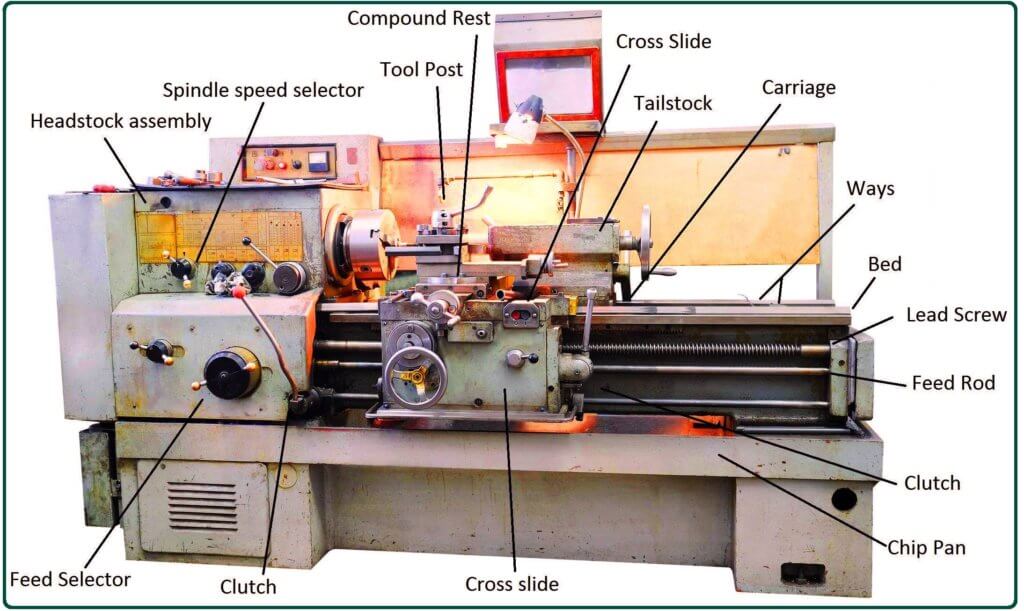 There are two legs present in Turrets Lathe. The complete lathe machine of the turret lathe is present on these two legs. These legs are used to carry the total weight of the machine. These feet are mounted on the floor to prevent any vibration in the machine.

The bed is present on two legs. This bed is made of cast iron because it has to withstand a lot of loads and must absorb shock. It is made through bed casting.

The headstock of a turret lathe is similar to that of an engine lathe but is larger and heavier in construction with a wider range of components. Typically the speed range varies from 30 to 2000 rpm.

One of the main features of the turret headstock is the provision of rapid stopping, starting, and speed changes that the operator has taken the most advantage of for any job by cutting speed and minimizing at the same time. Will go—loss of time in changing speed, stopping, and starting.

On smaller, simpler captain lattes where the machine stays on the same or narrow range of working diameters for longer, repeated speed changes are unnecessary, and, for simplicity, a three-stage unfettered cone-drive is employed.

This can be arranged by a special counter-shaft so that the feet connected to the belt shifting arrangement act by starting, stopping, and retracting by the pedals. The operator of one of these machines is, therefore, free to always operate the hands and operate the lever related to the cutting work.

There Are Two Main Types:-

Advertisements:- An electric head, with a multi-speed motor, mounted directly to the headstock, and All geared head that gives wider speeds and allows for heavier cuts.

A pilot bar or over-arm support is another feature of this machine. It is provided at the top of the headstock and thus gives rigidity and handling of the tool for precise working, especially when heavy cuts are taken.

It is used to engage & disengage the connections between the gears & the spindle. At starting, the gears & spindle are disengaged, but when motion is needed, the gears and the spindle can be engaged using the driving clutch.

Guideway is the predefined slotted path over which the carriage and saddle move.

The cross-slide unit, which is fitted with tools for facing, forming, and cutting, is somewhat different in construction from the tool-post and cart arrangement used on the sticks.

In some turret lats, the cross-slide is supported on the forward and lower front ways, allowing for greater swing clearance for the work. This arrangement is often used on saddle-type machines to be used for large diameter chucking operations.

In another arrangement, the cross-slide is mounted on both upper bed-ways and further supported by lower-ways. Such an arrangement is used in machines that are used for bar work and in processes where clearance of a large swing is not necessary. An advantage of this type is the added tool post in the rear, often used for cutting operations.

The rear and front end square turret are mounted on top of the cross-slide, each of them capable of holding four devices in readiness for use. If several different means are required, they are set up in order and can be quickly indexed and locked to the correct working conditions. Mimic the cut; the slide is provided with a positive stop or feed trip.

The rear end of the stop controls the cut depth of the rear turret tools, while the front end of the stop controls the depth of cut from the tool. Dogs on the side of the cross-slide attach these stops to regulate cross-slide travel. The cart has handwheels for hand-feeds, either longitudinal or cross. In addition to the hand feed, the power feed (either fast or slow) can be mounted by moving the lever that pushes the spring-activated pin inward.

When the traveling dogs collide with the feed stop, they release this pin which closes the feed lever and stops the trip.

The feed can be turned upside down to make tool movements in any direction. For exceedingly accurate work, a cross-feed dial graduated in hundredths of mm marked with a clip enables the operator to continue cutting by hand feed for a short distance after the trip dogs disengage the power feed.

The tool post is used to place the tool in the turret lathe machine. It is particularly used to hold single-point cutting tools. This tool’s post can move horizontally in the left or right directions. It can also cross the bed using a cross-slide. It can be moved using the handwheel or moved automatically.

The clutches lever is present in the headstock. It is used to engages and dismantle the driving mechanism along the axle. It is present on the hexagonal turret saddle, which can proceed.

The turret is a six-way block, which is carried on the bed of the machine for placing and moving the equipment. Each face of the hexagonal turret is provided with four tapped holes to take screws for various attachments, and with the machine through each frame and the center of the coaxial, the spindle is a hole in which the tool’s legs are attached, Can be held.

For this clamping, a pad bolt is often employed. On capstan lathes, the turret is not hexagonal but is spherical with six holes to accommodate the equipment because the equipment used for small tasks needs to be held on a flat face.

Since the equipment is connected to different turret faces to perform the work at work, it is necessary during a cycle of operation to get each tool to its working position. It is required to sort and underline the turret in a gradual position in which its faces are square along the axis. On the turret lathe, the turret is supported on an independent bearing so that it can be easily pulled by hand when the clamping arrangement is released.

It is located in each of the six correct positions in the rough form of the handheld rider, and the machine-operator manually indexes it to the required position after releasing the clamp and locating the rider. On the capstan lathe, means are also provided whereby the turret is automatically indexed to the next positions when it reaches the extreme end of its takedown movement from the previous position.

First, the workpiece that has to be changed to a desired shape and size is held in a chuck. These chucks are operated hydraulically or pneumatically. After that, all the devices are placed in the corresponding holes of the hexagonal turret.

The rashes are then rotated by rolling the chakli. As the chuck rotates, the workpieces attached to the chuck also rotate and saddle the hexagonal turret head to the rotating workpiece. This hexagonal tool head can rotate, & by rotating it, the required tool is faced towards the workpiece.

After encountering the required tool-workpiece, the tool is exposed to the workpiece, and the required operation is performed. After one operation is completed using one tool, another device is brought forward to perform various operations by rotating the hexagonal turret head.

In a manual turret lathe, the necessary equipment is used directly by the operator by the rotation of the turret, but in the automatic turret lathe, The turret head is brought to its initial positions after the completion of each operation, and the equipment is automatically indexed.

#1. Based on Orientation, Turrets Lathes Are Divided into Two Types:

Horizontal Turret Lathe:- In the horizontal turret lathe, the orientation of the hexagonal turret and the workpiece is horizontal.

#2. Based on the Method of Control, Turrets Lathes Are Divided into Four Types:

Manual Turret Lathe:- The manual turret lathe is the first turret lathe in order of historical appearance. The term “turret lathe” without the specified type is understood to refers to this type. This types of turret lathe require some amount of manual labor for its operation.

Automatic Turret Lathe (mechanically):- After the manual turret lathe machine, the automatic turret machine was developed, which reduced the operator’s duties and also increased productivity. These turret lats can perform multiple parts cutting cycles without human intervention. These turret lattes automate the sliding and indexing of the turret and the opening and closing of the chuck using a cam.

Here, the different Advantages of the Turret Lathe are as follows

A turret lathe is a lathe semi-automatics machine used for the repetitive production of lathe parts. They can do everything from cutting and sanding to facing, turning, and more. Lathes are defined by the way in which they hold the workpiece. In a lathe, the workpiece rotates while a stationary cutting tool presses against it.

A turret lathe contains a turret or a special kind of tool holder that can be used to mount several different tools at the same time.

Tool turrets rotate along a vertical axis to bring each tool into the correct position during the turning cycle. Typically, the entire tool turret is moved lengthwise to provide a feed for the tools.