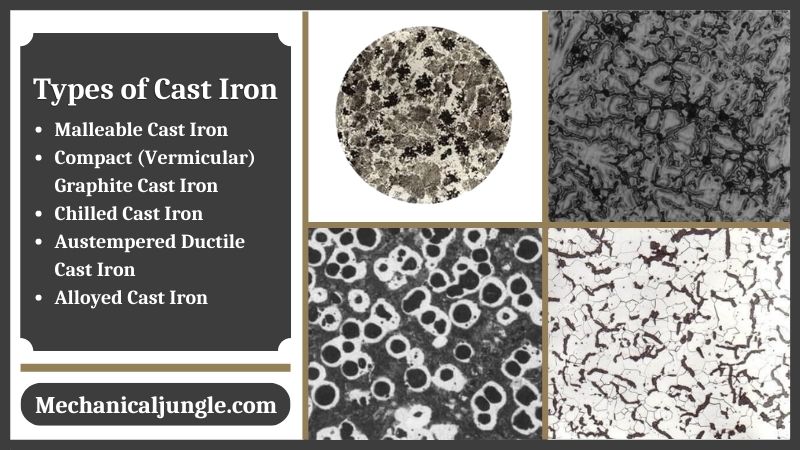 What Is Cast Iron Material?

Cast iron material is a group of carbon alloys containing 2 to 4% carbon and varying amounts of silica and manganese. It also contains impurities such as phosphorus & sulfur. It is produced by reducing iron ore in blast furnaces, and its primary material is cast iron produced from molten iron ore in the furnace. These irons are made directly from molten pig iron or by smelting pig iron, often with a substantial amount of iron, limestone, steel, or coke.

It can be melted in a special type of blast furnace called a cupola but is most often melted in an electric induction furnace or an electric arc furnace. As mentioned earlier, cast iron is made from pig iron, limestone, and coke. This manufacturing process takes place by melting those three ingredients in a cupola furnace. The cupola furnace is more or less similar to the blast furnace.

It is cylindrical in shape and has a diameter of about 1 m and a height of about 5 m. The material is poured from the top of the furnace and then heated. At this point, the impurities in the pig iron are somewhat removed by oxidation which forms the molten iron.

The slag is then removed from the top of the molten iron at regular intervals. The molten iron is then poured into a mold to form the required shape. Cast iron is a brittle & less ductile material with high corrosive strength. Due to its high compressive strengths, it is used to form the base or body of most machines.

Cast irons also have a low melting point of around 1200°C which makes them suitable for casting. It is called cast iron because of its casting properties. It has low manufacturing costs and has excellent machining properties.

One of the most popular way to make permanent and quality components are through casting. Casting allows a higher level of detail, resulting in no need for further fabrication or assembly. While many different materials can be casts, steel and iron are two of the most popular for most applications due to their excellent mechanical properties.

Cast iron generally refers to gray iron, ductile iron, and malleable iron, which is an iron casting with a carbon content of more than 2%. Cast steel generally refers to ordinary carbon steel and alloy steel, which is a steel casting with carbons contents of less than 2%. Therefore, there is no major difference between chemical content and raw material for cast iron vs cast steel.

When it comes to corrosion, irons have better corrosion resistance than steel. That doesn’t mean it’s impervious to corrosion either. When lefts unprotected, both metals will oxidize in the presence of moisture. Eventually, they will disintegrate completely. To prevent this, the coatings are recommended for both steel & irons castings.

Cast iron is often cheaper than casts steel because of the lower materials cost, energy, and labor required to produce the final product. While cast steel is more expensive, however, there are prefabricated forms of steel. These include sheet, rod, bar, tube, and beam.

Cast irons are relatively easy to cast, as it flows easily and does not shrink as much as steels. This flowability makes cast irons an ideal metal for architectural or ornate iron structures such as fencing and street furniture.

There are four main types of cast iron, as mentioned below: 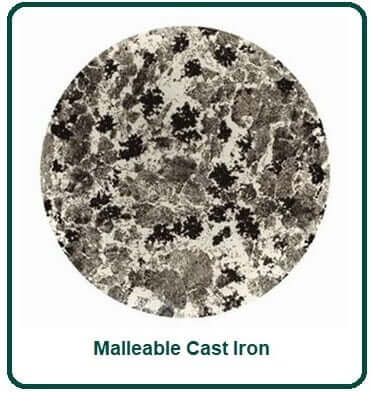 Malleable iron is a class of cast iron with mechanical strength properties that are intermediate between gray and ductile cast irons. Microstructures provide properties that make malleable irons ideal for applications where rigidity and machinability are required and for components that require some ductility or be malleable so that they bend or flex under conditions without cracking.

It can be done. They are often used as the materials of choice for small castings with thin cross-sections or for castings that, among other irons, are cooled carbides on the surface due to faster cooling rates in thinner sections.

Another important aspect is that malleable properties can be present up to the surface of the casting, unlike ductile iron, where the cast surface may have flake or deformed graphite, creating a stronger casting. Malleable cast iron is produced by heat-treating white cast iron. 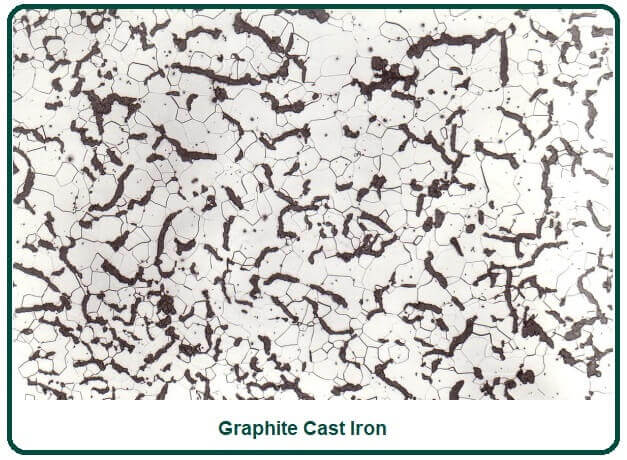 Compact graphite iron CG iron is a type of cast iron with properties between flake & nodular graphites cast irons. It is of interest because of its useful combinations of strengths, thermal conductivity, and other properties.

Their production requires the same controls as those applied in the manufacture of ductile iron castings. It is recommended to add a high-efficiency inoculant for the production of CG iron. A high level of inoculant addition results in a fine distribution of compacted graphite throughout the casting and low sensitivity to carbide formation.

Although graphite particles are long and randomly oriented like gray iron, they are shorter and thicker and have rounded edges. Furthermore, while the compressed graphite particle shape may appear worm-like when viewed over a cross-section, the ‘worms’ are actually interconnected.

This complex graphite morphology, with irregularly rough surfaces, results in strong adhesion between the graphite and iron matrix, and inhibits both cracks initiation & propagation, and is the source of superior mechanical properties relative to gray cast iron. 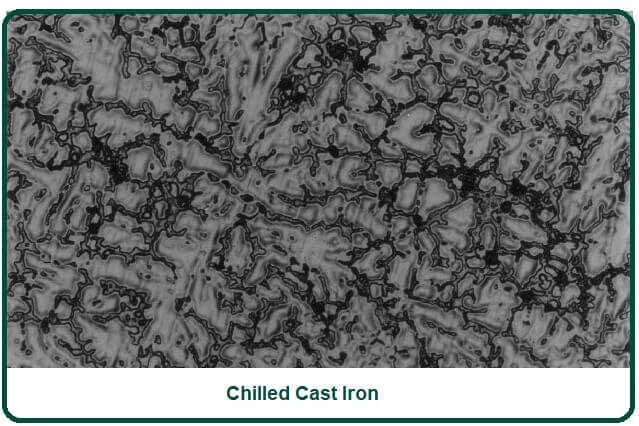 When a localized area of ​​cast iron cools much faster than the melt, carbides are formed. This type of cast iron is called cold iron. Adjusting the carbon composition of white CI can produce a cold iron casting so that the normal cooling rate at the surface is fast enough to produce carbide, while a slow cooling rate below the surfaces will produce gray or ductile irons.

The depth of the refrigerant decreases, and the hardness of the cold zone increases as the carbon content increases. Chromium is used in smalls amounts (1 to 4%) to control the depth of freezing, increase hardness, and improve abrasion resistance. 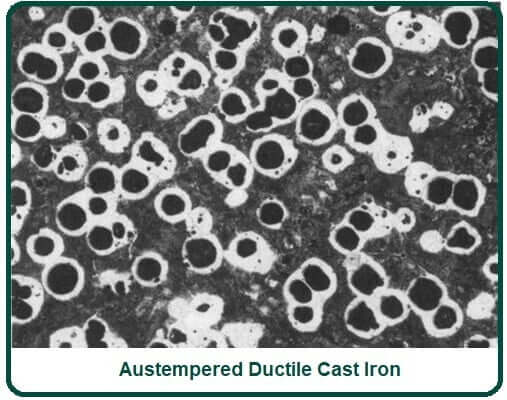 High-strength grades of ductile iron can be quenched & tempered to form a bainite-like matrix produced by austempering. Austempered Ductile Irons (ADI) provide twice the strength of conventional ductile iron at a given level of ductility. ADI can have strengths in excess of 230 ksi (1,586 MPa); However, its modulus is 20% less than that of comparable strength steel.

The automobile industries have made good use of austempered ductile CI. It is used for the crankshaft in some sports cars. It is reported to have excellent fatigue properties, & its damping characteristics reduce engine noise. ADI is a versatile material.

Specific sets of properties can be achieved by selecting precise heat treatment parameters. Low-rigidity eddy castings are used in structural applications, often where weight and cost reduction are important. The wear resistance at any hardness level is superior to that of steel, making higher hardness grades ideal for mining, construction, agriculture, and similar high-abrasion applications. 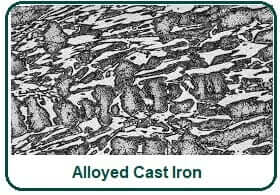 These irons are classified into two types: corrosion-resistant and elevated-temperature service. Corrosion-resistant alloyed cast irons are used to produce parts for engineering applications that operate in environments such as seawater, fine citrus oils, commercial organic and inorganic acids, & alkalis.

High chromium-containing CI is used in situations where high wear resistance is desirable, such as during the crushing of rocks and minerals. Iron consists of a combination of alloying elements such as Cr, Mo, and Ni, forming very strong carbides.

Cast iron comprises a large family of alloys that include a wide range of chemical compositions & metallurgical microstructures. Some of this material is weldable, while others require great care to produce a sound weld. Some cast iron is not considered weldable.

Materials but cast iron and steel electrodes can also produce satisfactory welds in some alloys. Iron castings are typically welded to repair defects to repair or upgrade a casting prior to service, to repair damaged or worn castings, and to cast in welded assemblies.

Repair of defects in new cast iron represents the largest single application of welding cast iron. Defects such as porosity, sand inclusions, cold shut, washout, and shift are usually repaired. Manufacturing errors, such as incorrect machining and misaligned holes, can also be repaired by welds. Due to the widely varying weldability of different classes of cast iron, welding processes must be adapted to the type of cast iron to weld.

Due to its extreme hardness and brittleness, white cast iron is not considered weldable. Proper preparation of castings is very important before welding. All traces of defects must be removed from the casting, usually by chipping, grinding, arc gouging, or flame gouging.

Dye-penetrant inspection is recommended to ensure the complete removal of all defects. Thorough cleaning of the joint face and adjacent material prior to welding is essential to ensure successful welding repair and to prevent porosity and wetting difficulties.

The electrode should be dried to reduce hydrogen loss and porosity. If machinability or optimum joints properties are desired, the casting should be sealed immediately after welding. Castings that have been in services are often saturated with oil or greases.

Exposure to high temperatures during the thermal weld cycle can lead to the dissociation of these hydrocarbon compounds, resulting in the formation of porosities in the weld. For this reason, any surface oil or greases must be removed using cleaning solvents or steam prior to welding.

The surface skin of the casting, which may contain burnt sand or other impurities from the mold, must also be removed. It is also important that the outer surfaces of the casting & any ground surface be wiped down with mineral spirits such as acetone to remove residual surface graphite prior to welding. Residual graphite prevents wetting and prevents complete joining and fusion.

Here, the different advantages of cast iron are as follows:

Here, the different disadvantages of cast iron are as follows:

What Is Cast Iron Material?

Cast iron is a class of iron-carbon alloys with a carbon content of more than 2%. Its usefulness derives from its relatively low melting temperature.

What Is the Difference Between Cast Iron and Iron?

Cast iron is an alloy of iron that contains 2 to 4 percent carbon, along with varying amounts of silicon and manganese and traces of impurities such as sulfur and phosphorus. It is made by reducing iron ore in a blast furnace.

In the No-Bake process, sand molds are formed using a wood or metal pattern. Fine-grain sand is combined with a resin binder in a high-speed mixer and then poured into a box containing the pattern. After a few minutes, the sand-binder mixture hardens and the mold is removed from the pattern.

Ductile iron castings are solid metal objects that result from molten ductile iron being poured into voids in a mold. The ductile iron subsequently cools and solidifies in the shape of the void it occupies.