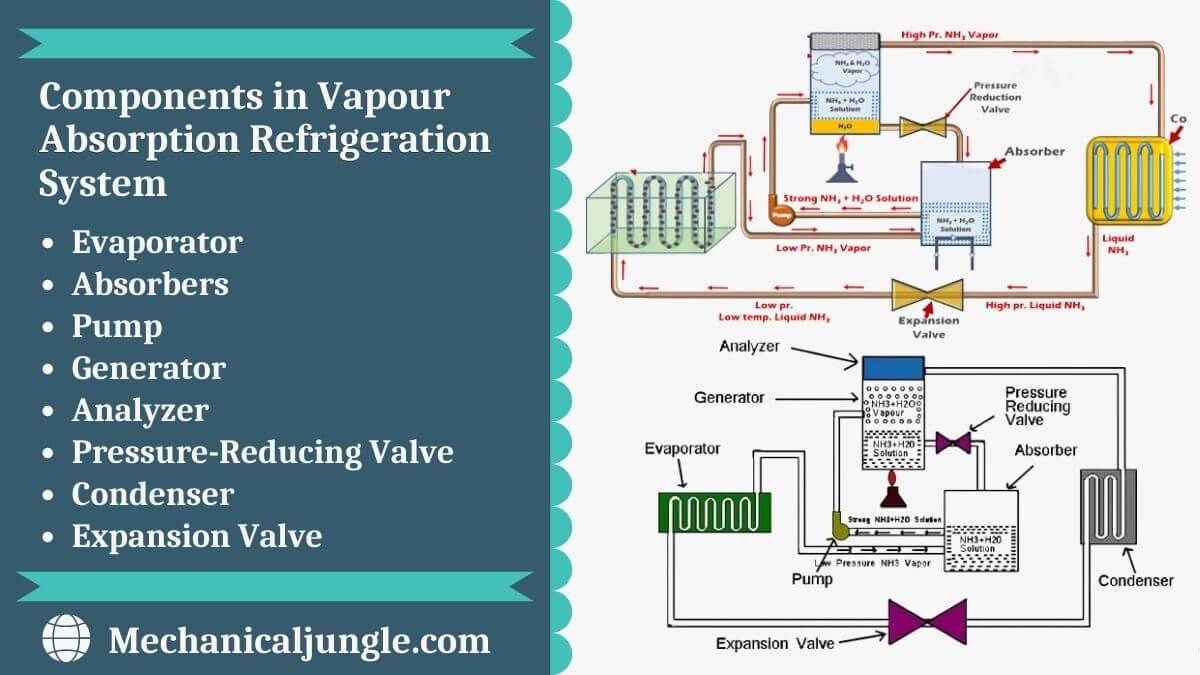 What Is Vapour Absorption Refrigeration System? 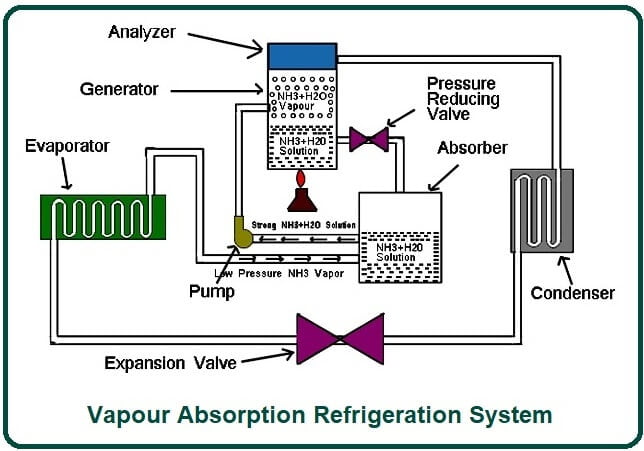 The compressor also enables the flow of refrigerants through the entire refrigeration cycle. In the vapor absorption cycle, a process of suction and compression is carried out by two different devices called absorbers and generators.

Heat can also be produced by other sources such as natural gas, kerosene, heaters, etc., although these sources are used only in small systems. 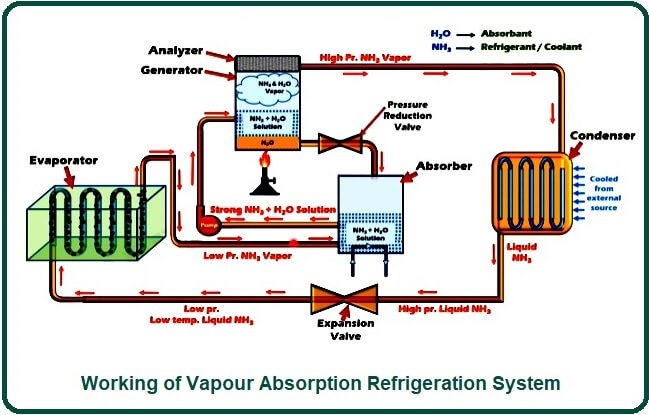 The next component and analyzer send water particles back to the generator through this pipe for further processing. With this generator, the diluted solution of water and ammonia residues deposited here will be sent back to the absorber again. The very cold liquid will exit the ammonia expansion valve that enters the evaporator coil through the connected pipe. The main cooling is always in the evaporator.

To keep the slurry temperature at an optimum level, cold water is supplied through this pipe so that this cold water keeps the heat away from the slurry, and thus the water gains the ability to absorb the incoming ammonia Vapour continuously.

There is a pump next to the absorber; now that power is provided, this pump starts working. A strong solution of ammonia & water will be pumped from the absorber to the generator using this pump.

In fact, ammonia turns into Vapour faster than water, and water completely turns into vapor. But eventually, both ammonia & water will turn into Vapour upon providing heat. Now here we also have analyzers on top of the generator. Only ammonia is allowed to pass when ammonia and water Vapour try to pass through this analyzer.

The analyzer continuously condenses the water Vapour & sends water back to the generator. This is because if waters Vapour enters the system, it may reduce the efficiency of the refrigeration system, or if a large amount of water vapor enters the system, the system may be damaged; Thus, the analyte separates the water particles from the ammonia Vapour and only allows the ammonia to pass through the pressure reducing valve.

This condenser can be either water-coolers or air-cooled. This will release the latent heat of the Vapour coming into the condenser, and thus condensation continues.

This low-pressure ammonia Vapour will then release the evaporator and enter the absorber through this connecting pipe. This entire cycle will be repeated again and again. Therefore, refrigeration will occur continuously in the evaporation zone.

The pump will pump a strong solution of ammonia and water from the absorber to the generator.

Ammonia and water solutions are used inside this system. Ammonia is used as a refrigerant, & water is used as an absorbent.
A solution of these two is formed because water has a strong affinity for ammonia. Water plus ammonia solutions are present inside the absorber.
The generator is provided with auxiliaries heat from outside. This auxiliary can be used to provide heat, steam or hot water, or any type of heater. Heat is provided so that the solution of ammonia and water is converted into vapor.

After the ammonia Vapour passes through the analyzers, the weak solution present in the generators will pass through the pressure reducing valve and reach the absorber again.

Condensers are used to convert ammonia Vapour into the liquid phase. These condensers can be either water-cooled or air-cooled.

In Vapour absorption refrigeration systems, the temperature of the heat source plays an important role. The heat given by the source can be used in a single-phase or in more than one phase. Accordingly, the system is called a single-phase or single-effect cycle of operation, and if heat is supplied in two phases, the system is called a two-phase or dual-effect cycle of operations.

A simple and practicals absorption system using ammonia as an absorber and refrigerant, as described in previous articles, is an example of a single-effect cycle system for Vapour absorption refrigeration systems.

The schematic sketch of the double-effect system is shown. The Vapour of refrigerants is generated in two stages, as shown. For this purpose, two heat exchanger is used.

An absorption refrigerator is a refrigerator that uses a heat source (e.g., solar energy, a fossil-fueled flame, waste heat from factories, or district heating systems) to provide the energy needed to drive the cooling process.

Absorption refrigeration systems (AR) are a well-known alternative to vapor-compression systems to achieve a cold space, especially where electricity prices are high. From: Low-Temperature Energy Systems with Applications of Renewable Energy, 2020.

How Does an Absorption Fridge Work

An absorption refrigerator is a refrigerator that uses a heat source (e.g., solar energy, a fossil-fueled flame, waste heat from factories, or district heating systems) to provide the energy needed to drive the cooling process.

How Does a Refrigeration System Work?

It enters the Evaporator in a liquid state where the exchange of heat takes place thus cooling the load inside the refrigerator. As the gas cools down the load, it absorbs the heat which turns it into a gas. The gas is then pushed back into the Compressor where it can start the cycle again.

What Is the Basic Principle of Refrigeration?

The Refrigeration basic principle is that with the aid of a heat pump, the refrigerant is being compressed to the condenser and capillary tube thus increasing its temperature (50-60°C) and pressure (750 kPa) in the refrigerator being cooled down by the condensing unit to 32°C depending the existing ambient temperature.

What Are the Types of Refrigeration System?

What Is the Purpose of a Refrigeration System?

Refrigeration systems operate by removing heat from cold objects and expelling it to a warm room, and they require the operation of a compressor that performs work during the process.

What Are the Four Stages of Refrigeration?

The compressor, condenser, expansion valve, and throttle valve are part of the Vapor Compression Refrigeration Cycle. The aim of the compression process is to raise the pressure in the air.

What Are the Four Major Components of Refrigeration?

What Are the Steps in Refrigeration Cycle?

What Is Basic Refrigerator Law?

According to the Second Law, all refrigerators must have work done on them in order for heat to flow from a cold body to a hot body. The Second Law of Thermodynamics describes the limitations of heat transfer.