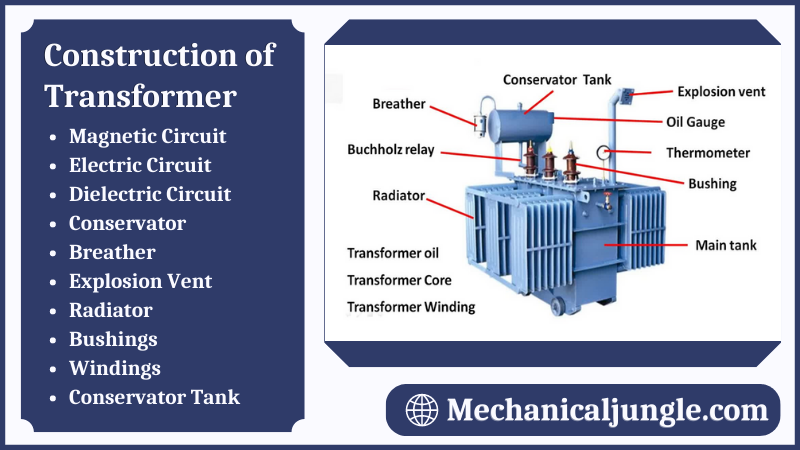 A transformer transfers electrical power from one circuit to another without a change in frequency. Transfer occurs on the basis of mutual induction between two circuits that are connected by magnetic flux. The transformer consists of two inductive coils that are electrically separated from each other but magnetically connected through a path for the flow of magnetic flux.

Basics principle behind the working of a transformer is the phenomenon of mutual induction between two windings connected by normal magnetic flux. The figure on the right shows the simplest form of a transformer.

Basically, transformers consist of two inductive coils; Primary winding and secondary winding. The coils are electrically separated but magnetically connected to each other. When the primary winding connects to a source of alternating voltage, alternating magnetic flux is generated around the winding. 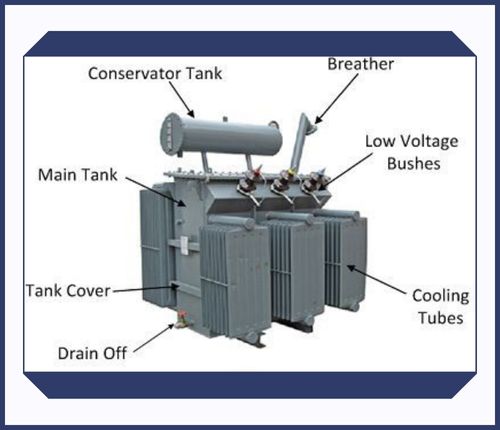 Basically, transformers consist of two inductive windings & laminated steels cores. The coil is insulated from each other as wells as from the steels cores. A transformer may also include a container for winding, and core assembly called a tank, suitable bushings for taking our terminals, and oil protectors to provide oil to the transformer tank for cooling purposes, etc.

The figure on the left shows the basics construction of a transformer. In all types of transformers, the core is constructed by stacking laminated sheets of steel with minimal air gaps between them to obtain a continuous magnetic path. The steel used has a high silicon content and is sometimes heat-treated to provide high permeability and low hysteresis loss.

The construction of the transformer is of an iron core laminated with steel bands. Core lamination is constructed from insulated metals thin metal strips. These laminations are separated & wound around the limb using sheets of coats or parchment.

There are two types of winding, main and secondary winding. These windings are isolated from each other and are formed by an electric coil. The key feature of the core is to facilitate the winding of the magnetic flux and provide a low thrift direction with useful flux.

The construction of transformer parts are as follows:

Magnetics circuits of transformers consist of a core and a yoke. The direction of magnetic flux flow is given by the circuit. A laminated steel core and two coils make up the transformer. The two coils are shielded from each other and also from the core. The cores of the transformer are made of a steel sheet or piece of silicon steel assembled to provide a continuous magnetic path. Silicon steel materials have minimal hysteresis losses at normal flux densities. The vertical position in which the coils are wound is called the limb, while the yoke is known as the horizontal position.

In the basic core style of transformer manufacturing, a rectangular lamination of the frame is made to shape the core of the transformer. Laminate is cut as L-shaped strips.

To prevent high resistance of joints where the laminates are bolted against each other, alternating layers are arranged to remove continuous joints. The main & secondary windings are interleaved to reduce the leakage current.

One-half of the winding is wound around each part of this type of core and is enclosed in such a way that no magnetic flux loss can occur and flow leakage is minimized.

This form of a structure appears to be very helpful for the diffusion of flow, with the windings covering each organ and thus the flow circulating throughout the heart.

The next part in the construction of a transformer is the individual pieces of shell-type transformers that are cut into the shapes of longs E and I strip.

It has two magnetic circuits, & its heart consists of three organs. The central limb carries the entire flow, while the lateral organs carry half the flow.

Since all windings are wound around the same middle arm, this arrangement also eliminates leakage of current.

Dielectric circuits have insulations that are used on transformers to insulate major components in various positions. The center is laminated to reduce the eddy current loss. Laminations are insulated from each other by lights covers of varnishes or an oxide layer. The thickness of laminates ranges from 0.35 mm to 0.5 mm at a frequency of 50 Hz.

That’s not the end! Along with the transformer’s build, you can also find a winding and core assembly container called a “tank,” bushings for taking up terminals, an oil protector to supply oil to the transformer tank for cooling purposes, etc.

The oils levels in the chamber rise & falls as the breather brings air in and out to cool the oil. This air contains moisture, which contaminates the oil and thus spoils the consistency of the oils. Breathers are packed with silica gel to remove this moisture.

It is important for the transformer to be constructed to be safe and to avoid damage; Therefore, there is an explosion vent, a thin aluminum pipe fitted at both ends of the transformer.

As the temperature in the transformer rises rapidly and additional pressure is generated, the explosive vent helps to relieve the pressure.

Cooling of oil in a transformer is the major feature of a radiator. The radiators are detachable tubes, the upper & lower parts of which are connected by a valve to the transformer tank. When the transformer washing and repair work is complete, the valve prevents oil from draining when the radiator is removed from the transformer.

Transformer oil is heated and flows up into the main tank while the transformer is in operating order & reaches the radiator through the upper valve. It cools down there, and the oil flows through the lower valve of the irradiation unit again into the transformer tank, & these mechanisms continue.

Bushings are an insulating system in the construction of a transformer that enables an electrical conductor to move electrical energy safely through it.

The most commons cause of bushing failure is the moisture inlet damaging the transformer. The power factors of the bushing will still be at a steady state, so if a power factor difference is observed, the insulation will wear out. The acceptance or routine test and the measure is known as the double power factor test would define this.

The winding arrangement is also an important concern in the manufacture of transformers. The winding of a transformer is made of a conducting material to allow magnetic flux to build up, and then-current can be transferred from one winding to another.

To increase the magnetic flux, these windings are wound on two separate iron parts, as iron is an important conductor & exhibits excellent magnetic properties. They are often insulting each other by this coil.

Since these two coils are wound on two separate limbs, flux leakage often occurs because of the distance between them; the magnetic flux density decreases, and consequently, the magnetic coupling between the two coil windings decreases.

Since it is often important for a type of container to keep the transformer core and windings tight, a tank is used to preserve the laminating fluid, reduce its oxidation, and maintain oil levels.

The tank also includes a number of other important systems, such as a set of adequate sensors and a relay sensing gas, which acts as a gas sensor and alerts if the presence of some unwanted gas is sensed and external. The circuitry is automatically protected by disconnecting the transformer.

Types of Transformers based on Cooling Method:

The oil-filled self-cooling type uses small and medium-sized distributions transformers. The assembled winding & core of such transformers are mounted in a welded, oil-tight steel tank provided with a steel cover.

As the core is put back in its proper place, the tank is filled with pure, high-quality insulating oil. The oil helps to transfer heat from the core and winding to the matter from where it is radiated to the surroundings.

For small-sized transformers, the tanks are usually on a smooth surface, but larger-sized transformers require a greater heat radiation area, and that too without disturbing the cubical capacity of the tank. This is achieved by re-melting the cases. Stills, larger sizes are provided with radiations or pipes.

This type is used for the more economical construction of large transformers, as the self-cooling method mentioned above is very expensive. The same method is used here – the winding and the core are immersed in oil.

The only differences are that there is a cooling coil located near the surface of the oil, through which the cooling water circulates. This water carries heat from the device. This design is usually applied to transformers that are used in high voltages transmission lines.

The biggest advantages of such designs are that such a transformer does not require housing other than its own. This brings down the cost to a great extent. Another advantage is that this type of maintenance and inspection is needed only once or twice a year.

These types are used for transformers that use voltages below 25,000 volts. The transformers are housed in a thin sheet metal box that is open at both ends through which air flows from bottom to top.

E.M.F Equation of a Transformer: 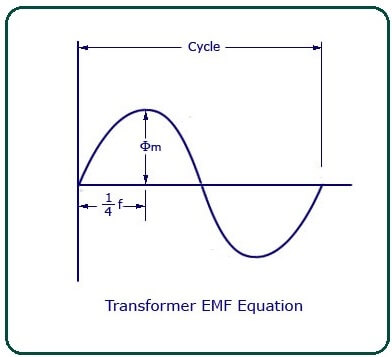 As shown in the figure above, the core flux increases from its zero value to maximum value Ømax in one-quarter of the cycles, that is in ¼ frequency second.

VA = EA & VB = EB , where VB is the Terminals voltages
Voltage Transformations Ratio (K)From the above equations, we get

Transformers are used in most electronic circuits. A transformer has only three applications;

A Transformer Rectifier Unit (TRU) combines the functions of a Transformer and a Rectifier into one unit. In aircraft applications, the TRU converts the 120V AC power generated by the engine or APU generators or provided by a Ground Power Unit (GPU) to 28V DC power for use by various electrical components.

A transformer is a passive component that transfers electrical energy from one electrical circuit to another circuit or multiple circuits.

The basic principle behind the working of a transformer is the phenomenon of mutual induction between two windings linked by common magnetic flux. The figure at right shows the simplest form of a transformer. Basically, a transformer consists of two inductive coils; primary winding and secondary winding.