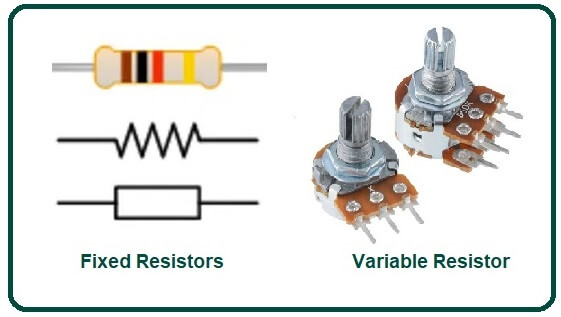 Resistors are made of materials that oppose the flow of electricity as it passes through them. In this way, they can control the flow of current throughout the circuit. When the current is reduced by a resistor, the excess electrical energy is converted into heat.

Resistors are available in a variety of forms, including the following major varieties:

Resistance with a Sinusoidal Supply:

When the switches are in OFF mode, an AC voltage (V) is applied across the resistor (R). This voltage can force the current to run. This current will increase & decrease as the mains voltage rises and falls with sinusoidal form.

The voltage and currents will both reach their peak amount or maximums because the load is resistances & back to zero value at exactly the same time, i.e., they rectify and reduce simultaneously and are presented as “in-phase.” Huh. Consider the diagram given below.

Then the current moving within the AC resistance transforms over time into a sinusoidal format and is represented by the frequency equation of I(t), where I am the maximums value of the current & is the coefficient of the phase angles.

We can also attribute this to a particular current, which is the current flowing within the resistor. So, the peak voltage or maximum across the terminals of R can be obtained by Ohm’s law:

And the received amount of current can be calculated as:

So, for a particulars resistive system, the alternating current in the resistor modifies relative to the voltage employed through it, following the same sinusoidal pattern. Since the basic frequency is equal to both the current and the voltage, their phases will also have the same value.

This “in-phase” effect can also be introduced by a phasing condition. Resistance in the complex domain is a real value which means there is no imaginary amount. Thus, since both current and voltage are in the same phase with each other, there will be no phase shift (θ = 0) between them.

So, the vectors of each value are presented in super-imposed mode and shown in the same reference axis. The transformation model from the phase format versus the sinusoidal domain of time can be derived in the next section.

The RMS sum of the current and voltage quantities as a phase varies for the vector that presents the maximum or peak values, separating the peak amounts of the time terms above √2 to the main current-voltage phase equation. The RMS relation is projected as.

And the phase relationship can be obtained as follows:

Impedance is the number of resistances that components offer to the current flow in a circuit at a specific frequency. These articles will talk about how impedance is similar and how it differs from just plain resistance. First, we’ll look at the similarities of the two. Impedance, like resistance, is a value that characterizes the amount of resistance of a component to the flow of electric current.

Resistances is a value & measure that is independent of frequency. It does not take into accounts frequencies of the signal passing through it, as the frequencies do not affect the resistances of the non-reactive components.

However, reactive components (which we will discuss below) change the amount of resistance they provide to the circuit depending on the frequency of the input signal. But the impedance varies according to the frequencies of the signals entering it. These are the differences between resistance and impedance.

They do not change the resistance value depending on the input frequency. One such component is the resistor, which operates independently of frequency. Whether the voltage passing through it is DC or AC does not affect the amount of resistance it offers. This is the same for both DC and AC signals.

However, the reactive components, there are two main capacitors and inductors, change the resistance value depending on the frequency of the signal entering them. Capacitors are reactive devices that have high impedance at low frequencies and low impedance at high frequencies.

Impedance is an important concept to understand because most electronic circuits use capacitors and inductors. The main thing to understand is that they are frequency-dependent.

In both AC and DC cases, these V–I diagrams are usually linear across a fixed resistance. Therefore, when applying resistors to an AC system, the impedance with the symbol Z is usually used for its resistance. Consequently, we can correctly explain that the DC resistance is equal to the AC impedance for resistors or Z = R.

The vector of impedances is provided by the letter (Z) for AC systems similar to DC circuits with the unit of an ohm (Ω). So, the impedance can be evaluated as:

Impedance can also be introduced by complex values as it is based on the frequency of the system when specialized equipment is used. But as a constant resistive system, this component is always zero, and the final formula for impedance in this particular circuit would be:

Since the phase shift between current and voltage in a completely resistive AC system is zero, the power coefficient must also be zero. So, the powers employed by the resistors can be evaluated by:

However, because the average power in a resistive system is based on phase shift and is always zero in a fixed resistor diagram, the power coefficients are equals to the powers of the average used by the AC resistance & can be measured by applying Ohm’s law. Can be offered:

Which is equivalent to Ohm’s law for a DC system. So, the effective energy used by the AC resistance is the same as the power used by the particular resistor in the DC system.

Many AC systems, including heating circuits & lamps, have just a fixed ohmic resistance. In these circuits, we can use both Kirchhoff’s law, Ohm’s law, and simple circuit equations to evaluate and find out DC system analysis such as current, voltage, impedance, and energy. When working with such methods, it is typical to employ RMS values.

In a particular resistance in an AC circuit, both voltage and current are “in-phase” as there is no phase shift in the system. The current flow within the resistance is directly related to voltage in an AC system with a linear relationship that can be represented as an impedance.

The impedance, which is introduced into a fixed resistance by the Z sign, is a complex number including a real segment which is the practical resistance value (R), and an imaginary zero segment (j0). Therefore, Ohm’s laws can be applied in systems with AC resistance to evaluating these currents and voltages. Now, we can consider two circuits to better understand the topic of resistance vs. impedance.

In-circuit (1), there is only one resistance part (R) connected to the AC supply. This resistance is the entire spare part of the circuit. The value of the device that controls the flow of current in an AC system is usually called impedance. So, the impedance of this circuit can be presented as Z = R, and the imaginary value of this element is zero.

In-circuit (2), the current monitoring devices are L, R, and C, and therefore their junctions, all together, can be considered as impedances. The amount of impedance can be calculated by the formula Z = R + j(ωL-1/ωC) where (-j/ωC) and jωL are the capacitive and inductive reactance, respectively. Being equal to 2πf, the impedance value is based on the supply frequency.

The main differences between resistance & impedance are briefly explained below and with a comparison chart: Resistance is used in electrical diagrams to control the flow of electric current. This current can be AC ​​or DC. Regardless of the nature of the current, resistance determines the flow of currents.

Impedances are a general term for a combination of inductive reactance, resistance, or capacitive type of reactance. This means a complex of resistance and different types of reactance in different sizes and formats.

For example, 5R+10ij, where 10R is the real value & 10ij is the imaginary segment. Multiple resistors are added only in a mathematical format. This means that if there are three resistances, R1, R2, and R3, the total sum will be (R1+R2+R3). On the other hand, we cannot add two or more impedances by these methods. They must be added vectorially.

Resistance values of systems do not modify depending on the frequency of DC or AC, whereas the impedance changes with variation in frequency. The impedance includes both the phase angle and magnitude, whereas the phase change does not occur in the composition of the resistance.