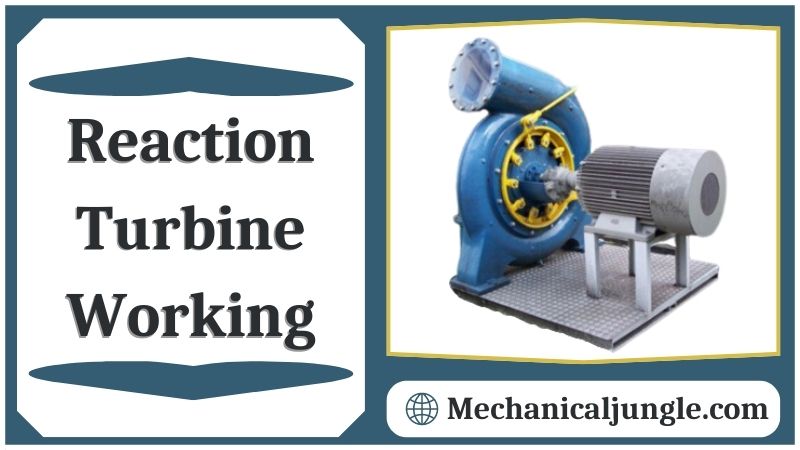 What Is Reaction Turbine?

Also, Read: What Is an Engine? | Types of Engine | Parts of Engine 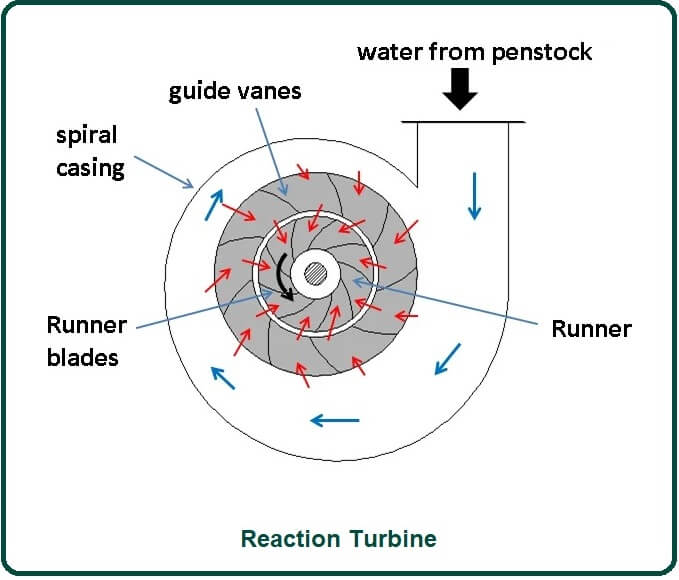 Reaction turbines are the type of turbine that develops torque by reacting to the pressure or mass of a gas or fluid. The operation of reaction turbines is described by Newton’s third law of motion, and the response is the same and opposite. The water pressure head, while flowing over the van, changes to the velocity head and eventually reduces to atmospheric pressure before leaving the wheel.

Also, Read: What Is Automobile? | Type of Automobiles

Waters are supplied by penstock from the reservoir to a turbine and then enter the casing. The cover completely surrounds the runner. This casing distributes the water in the turbine runner according to the perimeter. This cover is always filled with water. Inside the casing number of the existing fixed vanes, it partially transforms the available head with water into a dynamic head.

The cross-sectional area of ​​the casings is gradually reduced to maintain a constant velocity of water throughout the turbine runner. These various components and veins help the water flow into the runner with minimal loss of energy.

When water enters the runner above the rotor, it has both kinetic energy and pressure energy. When water collides with the moving van / rotating van, it applies the impulse force due to the kinetic energy, as in the case of the Pelton wheel.

As the water flows over the moving / rotating vane, it creates a pressure difference on the vane due to the airfoil shape of the vane, which causes the water to apply a lift force over the vane. These lift forces are also known as the reaction force.

The impulse and reaction force will rotate the runner. For these reasons, it is sometimes called an impulse response turbine. After the runner, the water flows out through the draft tube, which is placed under the runner. If you have any questions related to thises article, then comment.

If you liked thises article, do not forget to share it on social networks. The draft tube provides the suction head at the runner exit. The exhaust water goes into the tailrace, which further utilizes in various applications. All this is the basics of reaction turbines. All reaction turbines operate on the same principle.

The reaction turbine Parts are given below in detail.

This reaction is connected to the turbine component spiral casing. The most important function is to ensure that the direction of the water hitting the impeller blade is along the axis of the turbine. Otherwise, the water will create a strong vortex as it passes through the spiral layer.

The guide vanes can be closed or opened by rotating the regulating shaft; thus, the required amount of water flows as required. The regulating shaft is driven through a governor, whose function is to control the turbine, i.e., to keep the speed constant at different loads. Guide vanes are usually made of cast steel.

A reaction turbine’s runner consists of runner blades fixed to the shaft or ring, depending on the type of turbine. The blade is designed properly, so that water can enter and leave the runner without any shock. The surface of the runners is made very smooth.

The runners can be cast in one piece. It can be made of separate steel plates and welded together. For a lower head, the runner can be cast with iron. But for high heads, the runners are made of steel or alloys. When water is chemically impure, the runner is made of a special alloy.

Pressure falls with the casing, resulting in the same velocity of water hitting the rotor paddle. Therefore, the cross-sectional area in a circumferential direction is reduced to make the pressure uniform, and the moment and speed of the impact blade become uniform.

Water from a pipeline is distributed in a casing around the ring of the guide. These casings are designed in such a way that their cross-sectional area decreases uniformly around the perimeter. As a result, the casing will be either a spiral casing or a scroll casing.

A draft tube connects the runner’s exit to the trail run. As the water released from the blade is a relatively low pressure, its cross-sectional area increases along its length. The water, after passing through the runners, flows downstream through a tube called a draft tube.

This, generally, sinks about 1 m below the tailrace level. Its cross-sectionals are continued to expand, which helps relieve pressure as it flows toward the tailrace.

A draft tube has the following functions. This raises the top of the water by an amount equal to the height of the runner outlet above the tailrace; This increases the efficiency of the turbine. 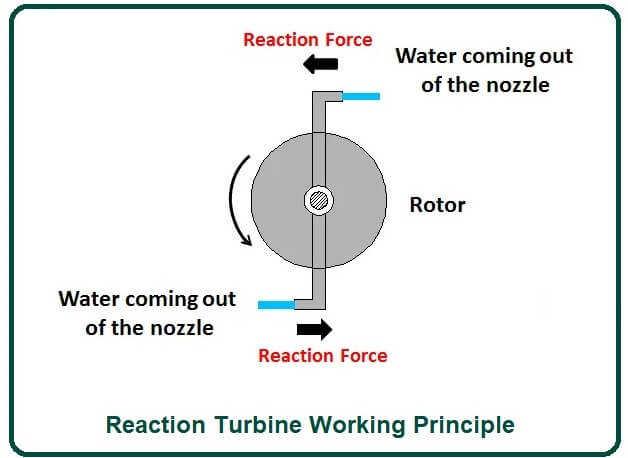 Here, the different advantages of reaction turbines are as follows.

Here, the different disadvantages of reaction turbines are as follows.

Here, the different applications of reaction turbines are as follows.

What Is Reaction Turbine?

Impulse turbines are most efficient for use in cases where the flow is low, and the inlet pressure is high. Reaction turbines develop torque by reacting to the gas or fluid’s pressure or mass. The pressure of the gas or fluid changes as it passes through the turbine rotor blades.

Parts of the Reaction Turbine