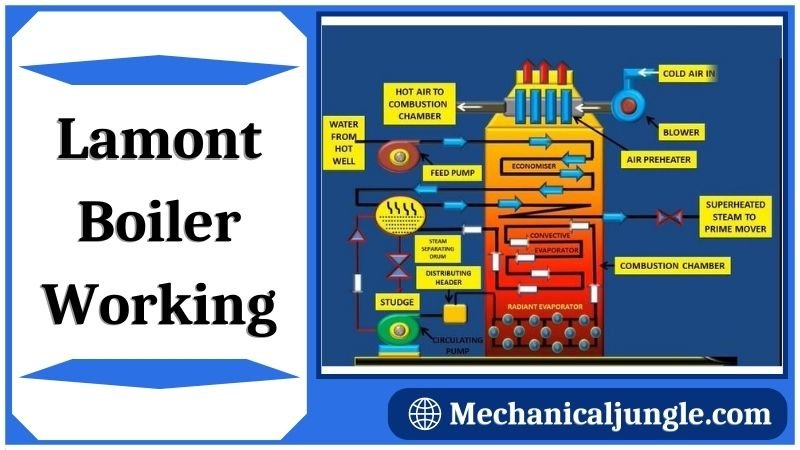 What Is Lamont Boiler? 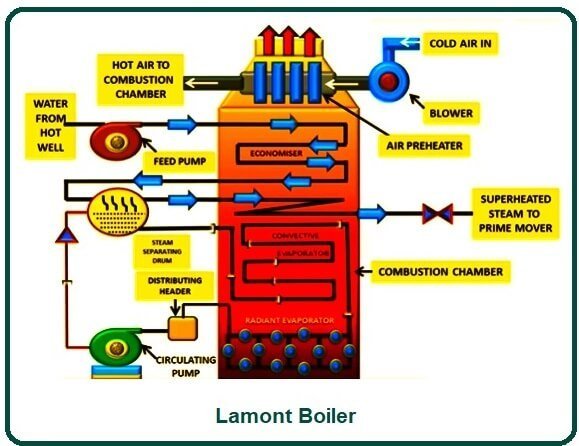 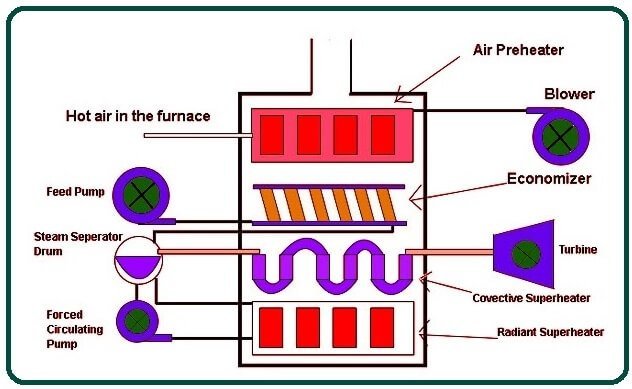 These are the main parts of the Lamont boiler:

The feed pump supplies water from the hot well to the boiler.

The economizer is used to raise the temperature of feed water to some extent.

The centrifugal pump is used to circulate water inside the Lamont boiler as it is a forced circulation boiler. The pump is powered by a steam turbine, and the steam for this turbine is taken by the boiler. This boiler uses its own steam to drive its pump, which circulates water in it.

The role of this part of the Lamont boiler is indicated by its name. It separates the steam from water.

A radiant evaporator heats water with the help of radiation. It is located near Bhatti.

The Convective Evaporator is located above the Radiant Evaporator. It heats water by convection process.

The air preheater is located near the top of the Lamont boiler. Its main function is to improve the thermal efficiency of the boiler before the air comes from the blower, and this preheated air is sent to the furnace.

This blows air into the air preheater, which is further sent to the furnace to increase the effectiveness of the boiler.

First, the air blower will blow air into the air preheater, where the air is preheated & sent to the furnace to increase the thermals efficiency of the boilers. On the other hand, the water feed pump transmits water to the boiler’s economizer. The economist heats the water to some extent, and this water is sent to the steam separator drum.

The superhit steam is then sent either to the steam collecting drum or to the turbine to produce electricity. In addition, air from the air preheater reaches the furnace where the fuel burns. The flue gases from the furnaces first heat evaporator & then pass through the superheater. This gas reaches the air preheater after passing through the superheater and is used to preheat the air before reaching France.

The steam separator drum is also connected to the superheater, which heats the air to the desired level and then transfers the steam to the turbine to generate electricity.

The boiler is mostly used in power plants where steam turbines are used to produce electricity.

These are some of the benefits of Lamont boilers:

What Type of Boiler Is a Lamont Boiler?

A LaMont boiler is a type of forced circulation water-tube boiler in which the boiler water is circulated through an external pump through long, closely spaced tubes of small diameter. The mechanical pump is employed in order to have adequate and positive circulation in steam and hot water boilers.

What Is the Main Disadvantage of Lamont Boiler?

Explanation: The main disadvantage of the Lamont boiler is the formation of bubbles. These bubbles come in contact with the inner surface of the heating tubes and subsequently are attached to them.

Lamont boiler is a forced circulation, internally fired water tube boiler. The fuel is burned inside the boiler, and the water is circulated by a centrifugal pump through evaporator tubes. The working of this boiler is as follows. A feed pump forces the water into the economizer, where the temperature of the water increases.