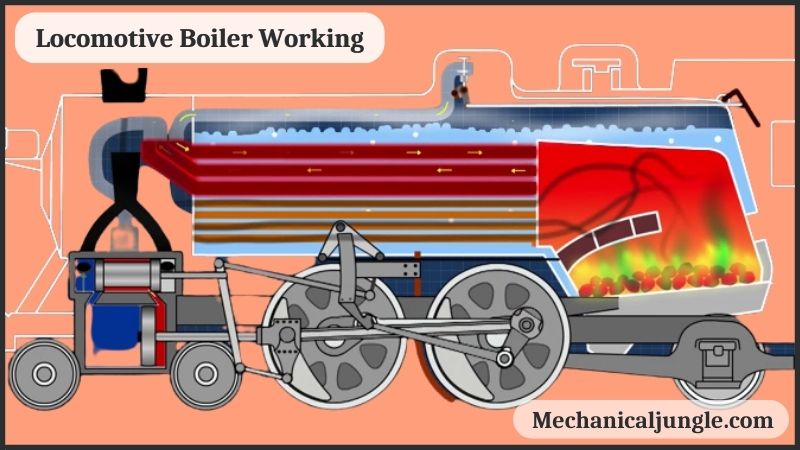 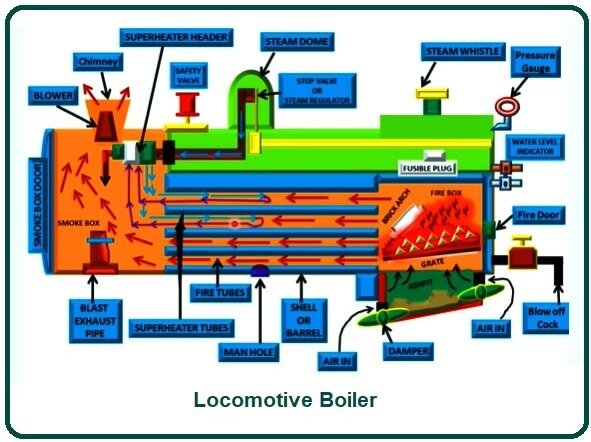 The locomotive boiler is a steel shell containing water that is converted from steam heat to fire in the firebox to furnish the energy to move the locomotive. It is a horizontally, multi-tubular, internally fired, natural circulation boiler. An artificial stream jet draft is present in this boiler to increase the heat transfer rate, which will be seen in detail in the working part of this article.

These boilers have increased back-ends for the firebox. Also, this boiler has about 116 general fire tubes and 38 super-heated fire tubes. It used solid fuels such as coal for its work. The locomotive boiler is a portable boiler, i.e., it can be easily moved from one place to another. 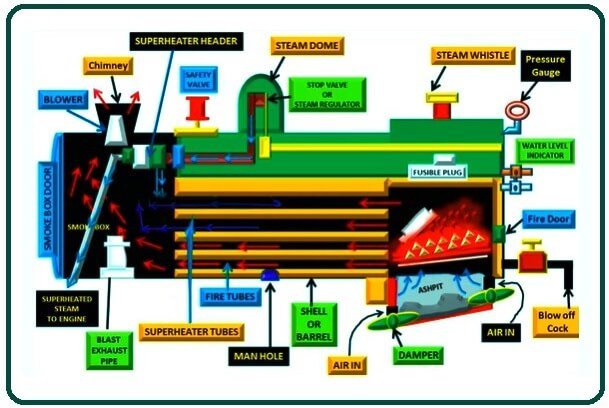 A fire brick arch exists that provides a passage and direction for the flue gases to reach the flue gases and prevents solid fuel particles from entering the fire tubes. These flu pipes are surrounded by water, and this water will start heating up, and these flue gases will come out of the chimney.

In this way, flue gases will continuously heat the pipe & escape from the boiler through the chimney. Due to the heat received from flue gases, the water will start heating up, and gradually it will start converting into steam.

Steam emanating from the steam engine. Burned gases and smoke reach the smokebox after passing through the tubes of fire. The exhaust steam coming out of the blast pipe pushes the smoke and burnt gases into the smokebox and drives them through the chimney by removing them from the boiler.

These Superheaters are used to heat the steam to a much higher desired temperature before entering the steam engine.

Hot gases will flow inside these fire tubes. These fire taps are surrounded by water and exchange heat from the surrounding waters.

The ash of burnt fuels is collected in this ash. It is also known as ashpan. It is applied under the mesh.

The fuel is burnt on top of the fuel. The melted iron is made of cast iron. There is a vacancy between the grate so that air can pass through it and fuel can burn easily.

This brick arch is placed on top of the furnace. The main function of these brick arches is to prevent ash, dust, & burnt fuel particles from entering the fire tubes.

It also serves as a passage for the flue gases before entering the fire tubes.

When the fuel is burnt, the deflector is used to deflect the hot gases generated toward the fire tubes.

Fuel enters the boiler through these fire holes. Solid fuel usually enters the coal through this fire hole and is placed above the furnace. This hole is provided at the rears end of the boilers.

Fuel is lit inside this firebox.

In smoke, burnt fuel smoke is collected after passing through fire tubes.

The boilers can be cleaned through this smokebox door.

This blast pipe is used to make artificial drafts through the chimney to flush out fumes and make suction for hot flue gases. This suction made by the blast pipe also helps the gases to enter the fire tubes.

It is a pipe through which steam passes. We have two steam pipes; There is a main steam pipe between the superheater header and the dome. And the other one is the one that connects the superhit exit end to the steam engine.

This regulator is used to supply steam when the operator pulls the lever. It controls steam through the main steam pipe for superheating.

Safety valves are used to blow off excess steam when the pressure in the boiler exceeds the safety level and prevents the boiler from being destroyed.

Blow-off coke is used to remove or discharge soil and sediment. It is also used to shut off boiler water.

This exhaust steam escapes from the pipe after working with the steam engine.

As the name suggests & it is used to indicates the water level in the boiler.

It is used to indicate the pressure readings inside the boiler.

Locomotive boilers have the following advantages:

Locomotive boilers have the following disadvantages:

Locomotive boilers are used in various places, where they have some applications:

The exterior of a steam boiler forms a case to contain the water and steam, often inclosing also flues and the furnace; the barrel of a cylindrical, or locomotive, boiler. See also: Shell.

Superheater headers operate in a steamy environment under the pressure of 15.5 MPa at a temperature of 545 ºС. The header is a thick-walled cylinder made of 12Cr1MoV steel with a length of 2314 mm, an outer diameter of 325 mm, and a thickness of 50 mm.

Using a grate, we insert the fuel into the boiler and then provide the fire to ignite the fuel. When fuel starts burning, hot flue gases are produced. And these hot flue gases are passed through the pipe continuously until the surrounding water gets heated.