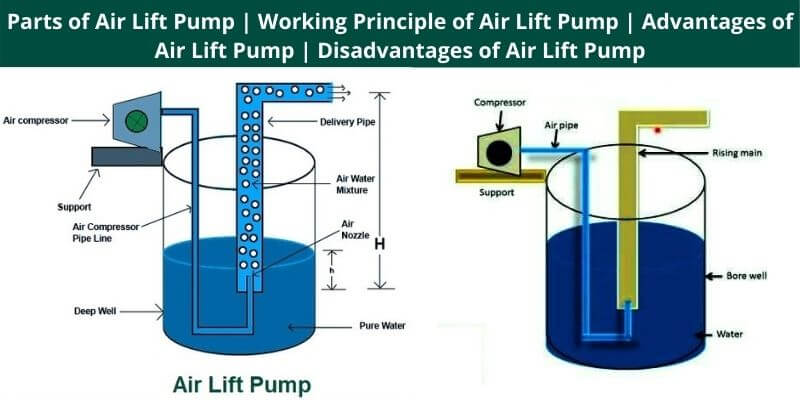 What Is an Air Lift Pump?

An air lift pumps are a device used to lift water from a well or a sump using compressed air. These pumps are also called mammoth pumps. Airlift pumps have been used since the early 20th century. The first airlift pump was invented in 1797 by German engineer Karl Emanuel Loscher. Air lift pumps are commonly found in agricultural land.

They are simple devices in which liquid enters from one end and a mixture of air and liquid discharge from the other end. Air is injected near the inlet. Almost without exceptions, the riser section of the airlift pumps has been a vertical pipe with a vertical cross-section.

Airlift pumps are typically used when maintenance needs to be kept to an absolute minimum. But this pump is not 100% maintenance-free because air is needed to deliver equipment to the pump that needs maintenance.

Different Symbols in the diagram:- 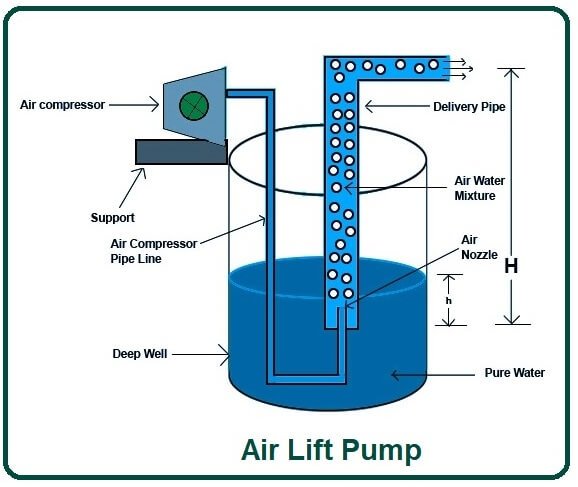 These pipes are used to lift water from the well. Using this pipe, the mixture of water and air rises. Both ends of the delivery pipes are open. The lower end of this pipe is immersed in water through which water is raised.

Compressed air is sent to the delivery pipes using this air pipeline. The upper end of this pipe is connected to the air compressor, while the bottom nozzle is fitted with an air nozzle.

In air lift pumps, compressed air is mixed with water. We know that the density of water is much higher than the density of air. By buoyancy, the air that has a lower density than liquid rises quickly. By fluid pressure, the liquid is taken into the flow of the ascending air and moves in the same direction as the air.

So the mixture of air and water, also called froth, is much lower in density than water. Hence the main principle of air lift pump is the density difference between air and water mixture and water.

The efficiency of air lift pumps depend on two things:

For these pumps, the air injector system is in the form of an air jacket in which several holes are radially drilled through the pipe, and the air is supplied to them from the surrounding manifold.