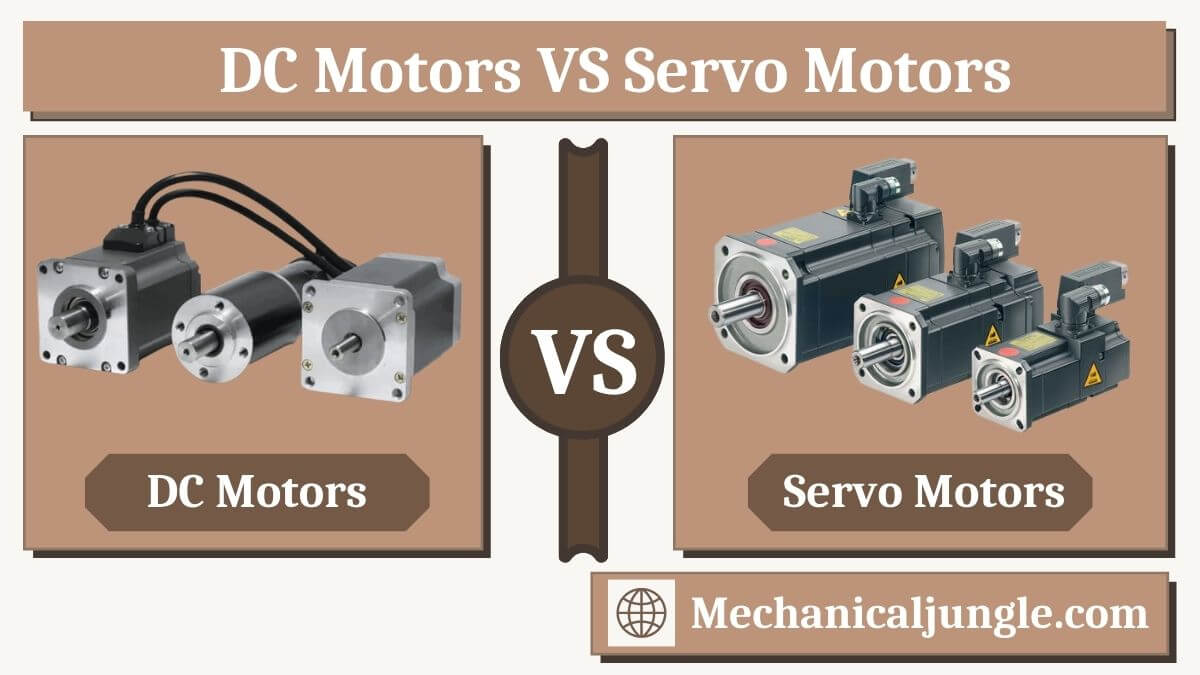 What Is a DC Motor? 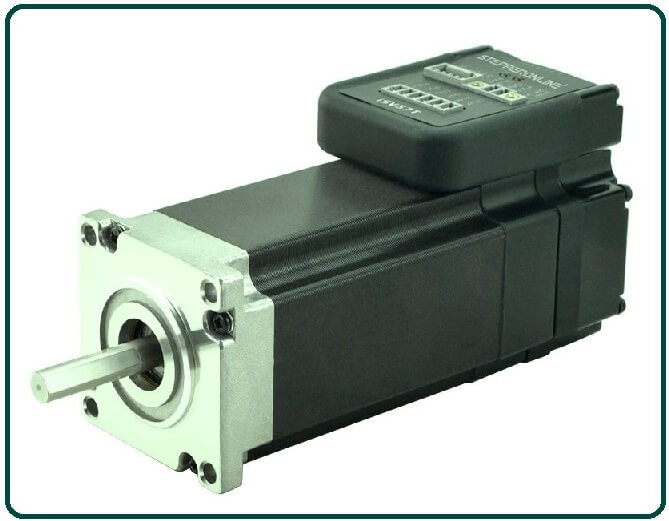 DC (Direct Current) motors are two-wire power and ground, continuous rotation motors. When these wires are connected to a power supply, a DC motor will start spinning until that power is removed. Most DC motors run at high rpm revolutions per minute.

DC motors can be used for computer cooling fans, radio-controlled cars, or other automotive applications. Mostly, the speed of DC motors is controlled using Pulse Width Modulation (PWM). Using this technology, we are rapidly turning the power on and off.

The percentage of time taken to cycle the on/off ratio determines the speed of the motors. For example, if the powers are cycled at 50%, half on & half off, the motor will spin at half your maximum speed fully on. Each pulse is so fast that motors appear to spin continuously without stuttering.

The hard part comes in controlling the polarity of the current flowing through the coil and adjusting it to the speed of the rotor. This can be achieved by measuring the emf back or by using a Hall effect sensor to measure the position of the magnets directly. Due to this, brushless DC motors are generally more expensive and complex, despite it having many advantages over brushed DC motors.

What Is a Servo Motor? 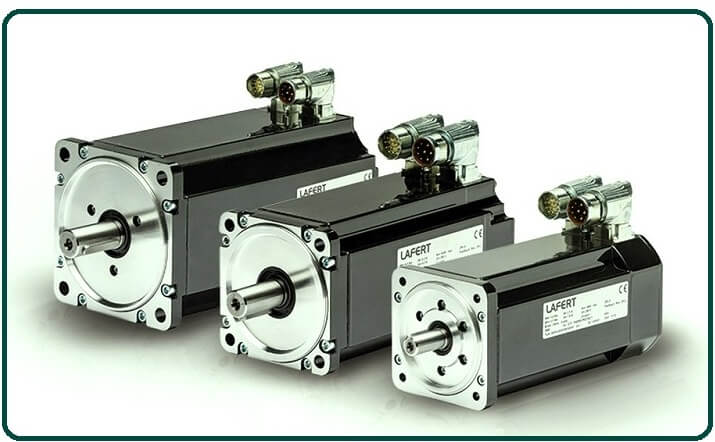 We can talk about servo motors as a combination of four things: a DC motor, a gearing set, a control circuit, & a position-sensor, usually a potentiometer. Servo motors are known in the industry as motors that can be controlled most accurately. Compared to servos with standard DC motors, servos typically have three wires power, ground, and control.

Power is continuously applied to the servo motors. The servo controller controls the current draw to drive the motor. This motor is designed for more specific tasks where the position needs to be defined. In addition, servo motors are used for precise tasks, for example, to move a robotic arm or robotic leg within a certain range, to move the camera to some object and etc.

Although we should mention that servo motors do not spin freely like a standard DC motor, unless it is modified for continuous rotation, there is no limit on the range of motion of these types of motors. And instead of being the input signal that determines which position the servo should be in to rotate, continuous rotation relates the speed of the output and direction to the servo input.

However, for most servo motors, the angle of rotation is limited to 180 degrees forward and backward. The servo motor receives a control signal that represents an output position and applies power to the DC motor until the shaft is turned to the precise position, determined by the position sensor. Unlike DC motors, a PWM signal is used to control the servo motor.

Durations of positive pulse determine the position rather than the speed of the servo shaft. A neutral pulse value usually around 1.5ms, dependent on the servo, keeps the servo shafts in the center position. Increasing that pulses values will make servos rotate clockwise, and a shorter pulse will rotate the shaft counterclockwise.

The servo control pulse is typically repeated every 20 milliseconds depending on the servo motor. We must always tell the servo where to go, even if it means staying in that position. When a servo receives a command to move, it will move into position and try to maintain that position even if an external force pushes against it.

A Brief Comparison Between Dc Motors and Servo Motors:

Servo motors are highly controllable. They were created with precision and accuracy in mind and provide users with essentially infinite resolution of what the output angle can be. DC motors, while much less complex than servo motors, are also easier to control; Reverse the lead to change direction and change voltage to change speed.

These motors can be easily controlled, but their difference in complexity changes the resolution of the controls. Torques or speed range of DC motors is increased only by the number of types of DC motors present. There are good chances that, given a certain speed & torque requirement, a DC motor has been developed to fit the bills.

However, the servo motor combines these dynamics speed/torque range with the ability to modify it at will. Their electronic feedback allows operators to set desired speed and power, and the servo motor will comply. So, while there is a wide range of DC motors on the market with varying torque/speed, the average servo motor per unit can cover much of this range.

The reliability of both these motors depends on the failure rate and maintenance. When brushes on DC motors are consistently serviced and used responsibly, they can last for a long time without losing their functional characteristics. However, even if they do break down, their low cost allows buyers to replace only the broken motor.

Servo motors are not disposables but are also more reliables per unit. It was important to note that when the servo motor breaks down, the maintenance process is much more difficult. Since error correction is paramount, the system must be adjusted for accuracy when new components are added, which is time-consuming & often requires experts technicians to reconfigure the system.

The efficiency of DC motors suffers from heats loss from brush contacts, but newer models are often rated with efficiencies of up to 85%, which is an impressive number. Servo motors will naturally outperform DC motors in terms of efficiency, as precise electronics control the current & minimize losses. Even when servo motors are not in use, they still draw a current due to their feedback encoders, which means that servo motors must always be driven at some potential.

This is usually not the problem, but if regular power off is required, then servo motors will be harder to use. DC motors win when it comes to continuous output. They are largely unaffected by long runs with maintenance and can provide good torque during this period.

Servo motors are best used in intermittents applications where the motor does not spin continuously for very long, as operators want to reduce the chance of failure. Servo motors can also only provide their peaks torque for a small percentage of the operating times, or they will be damaged, so they are best used as positioning motors & not for continuous rotation or spinning. 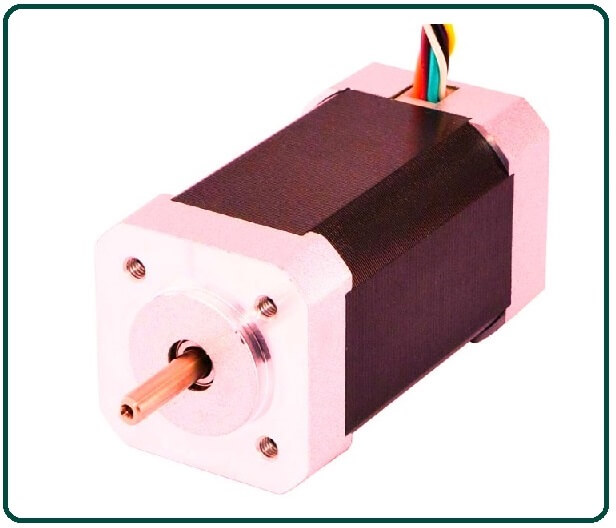 The price of the common dc motor has the best chance of competing against this highly accurate contender. Not only are they cheap per unit, but DC motors do not require additional controllers, amplifiers, & sensors to function well.

Servo motors & their accessories are more expensive to buy, install, maintain & replace, making them a risky option if long-term costs are a concern. While they offer excellent torque, speed, and position control, servo motors and their price tags can scare off some buyers depending on overall project cost goals.

DC Motor VS. Servo Motor is explained here, considering factors like the number of wires used in a two-wire or three-wire system. The assembly system is used, whether or not the motor’s rotation is continuous—examples of both motors.

The difference between DC Motor VS. Servo Motor is given below in a tabular form.


Servo motors are basically DC motors that do not run continuously for a long time. It has a unique arrangement that allows the motor to rotate at a specific angle with greater precision and accuracy. This machine is controlled by feedback systems.

Direct Currents DC Motors, as already discussed in the articles DC Machine, is a device that converts electrical energy into mechanical.

It is based on the principles of Fleming’s left-hand rules that when a conductor is placed in a magnetic field that carries current, torque is produced that moves the motor.

This is a brief overview of a complex and somewhat controversial area, especially regarding the pros and cons of steppers vs. servos, but hopefully, it will help you make a more informed choice with your motoring needs!

Fast, continuous rotation motors are used for anything that needs to spin at high rpm, e.g., Car wheels, fans, etc.

Slow, precise rotation, easy setup, and control advantage over servo motors in positional control. Where a feedback mechanism and support circuitry are required to drive the positioning of the servo, a stepper motor has positional control through the nature of rotation by fractional increments. Suitable for 3D printers and similar equipment where a condition is fundamental.

The servo motor consists of a DC motor but not a Servo motor. DC motors spin at high rpm and very low torque. However, inside a servo motor, there is an arrangement of gears that will take the high speed of the internal DC motor and slow it down, while at the same time increasing the torque.

DC motors are fast and continuous rotation motors mainly used for anything that needs to rotate at a high rotation per minute (RPM). For instance; car wheels, fans, etc. Servo motors are high torque, fast, accurate rotation at a limited angle.

What Is a Servomotor?

A servomotor is a linear actuator or rotary actuator that allows for precise control of linear or angular position, acceleration, and velocity.

A servomotor (or servo motor) is a rotary actuator or linear actuator that allows for precise control of angular or linear position, velocity, and acceleration.

What Are Servo Motors Used For?

In modern cars, servo motors are used to control their speed. When stepping on the gas pedal, it sends electrical signals to the car’s computer. The computer then processes that information and sends a signal to the servo attached to the throttle to adjust the engine speed.