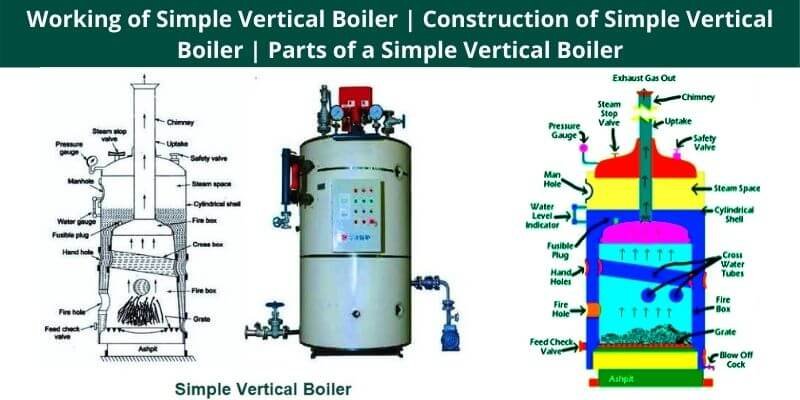 What Is a Simple Vertical Boiler? 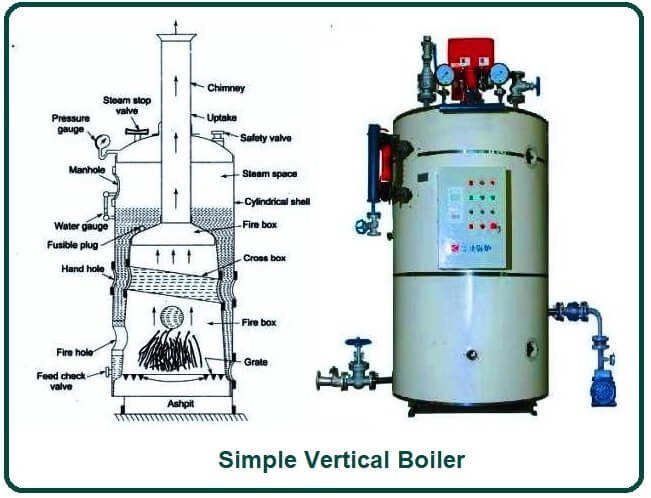 The simple vertical boiler is a boiler in which water is boiled inside a large vertical cylindrical shell, and steam is produced. This is the simplest type of firewater boiler. This boiler produces low pressure & a small amount of steam.

This boiler creates a pressure of about 10 bar. The construction of this boiler is much simpler and easier than any other boiler. These boilers occupy very little space, so it is used where less ground is available for operation. In this boiler, steam is produced under low power conditions such as small power plants for power generation. 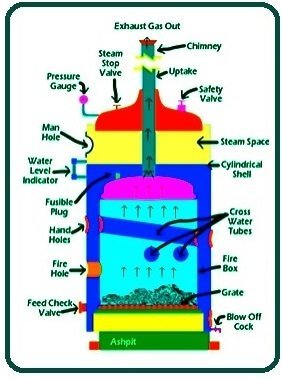 In simple vertical boilers, the first fuel is added to the furnace through a fire hole. Fuel is placed on the furnace at the bottom of the furnace. When the fuel burns, hot gas is produced, and the ash produced from burning the fuel is collected into ashes.

The hot gas produced by the burning of fuel is then sent to the cross tubes, and the waste gases are then transported to the atmosphere through the chimney.

The heat from the flue gases in the cross tube is transferred to the water, and the water is heated to produce steam. Current water due to convection goes from the lower end of the cross tube to the higher end by natural circulation.

The steam produced by the heat transfer from the vapor gas to the water is then collected at the steam location of the boiler; steam is collected until a certain pressure is reached, and then the steam is released to the gas turbine or engine or any other Use is passed.

The largest part of the simple vertical boiler is the vertical cylindrical shell. This is the outermost part of the simple vertical boiler, with other boiler parts contained inside this part. Inside this shell, there is a firebox under the shell. This firebox consists of a furnace, a furnace, and an ashpit. The grate is present below the firebox where fuel or coal is kept and burned in the furnace.

The ashpit is under the furnace where the ash created by the burning fuel is collected. The coal is introduced through the fire hole in the firebox. The cross tube is present in the center of the boiler and is placed horizontally. This tube transfers heat from the flue gas to the water.

Parts of a Simple Vertical Boiler:

This is the outermost cylindrical verticals shell of the boiler. Other parts of the boilers are inside this part. Most of this cylindrical shell is filled with water, and the rest is for steam.

One or more cross tube is riveted or flanged to enhance the heating surface and improve water circulation.

Furnaces are used for the combustion of coal. Coal is burnt here to produce heat.

It is present under the furnace. This is the place in the furnace where coal is kept.

Coal is poured into the furnace through this hole or door.

It is available in the boiler to collect the ash deposited by the furnace.

Hand holes are present opposite the end of each cross tube for cleaning the cross tube in the boiler.

A chimney is a vertical cylindrical pipe that extends from the top of the firebox to the 1the top of the shell. It is used to pass smoke from the boiler to the atmosphere.

The function of steam stop valves is to regulate the flow of steam from within the boiler and stop it completely if required.

Pressure gauges are used to measure the pressure of steam inside the boiler. It is arranged in front of the boilers.

It is an important device, which indicates the water level inside the boiler. This is a safety device on which the boiler’s safe work depends.

The function of the fusible plug is to ignite the boiler furnace when the water level falls below the unsafe level and thus avoid explosion, which may be caused by overheating of the tube and the shell.