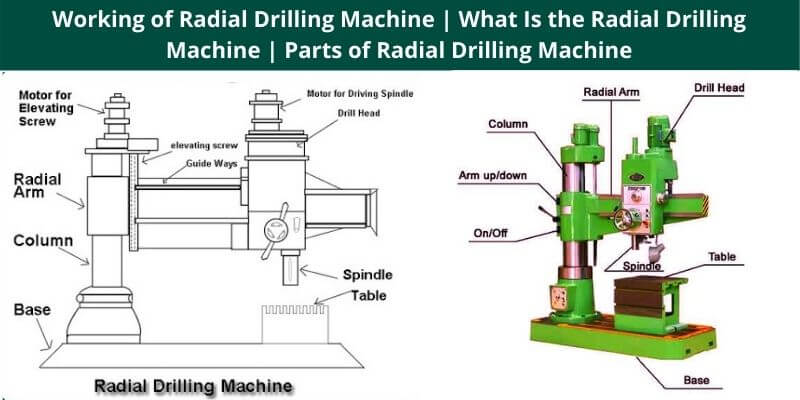 Initially, when a power supply is given, the spindle rotates, which is driven by the motor. Since the radial arm can move up and down in the column, the radial arm is adjusted according to the operation and height of the workpiece.

The spindle is attached to the chuck, and the drill bit is placed in the jaw of the chuck. The head of the drilling machine is also adjusted so that the tool is in the correct position to make a hole in the workpiece.

After that, a suitable feed is given, and then the drill bit easily moves into the workpiece. the drive mechanism used in the drilling machine is the rack and pinion mechanism.

What Is the Radial Drilling Machine? 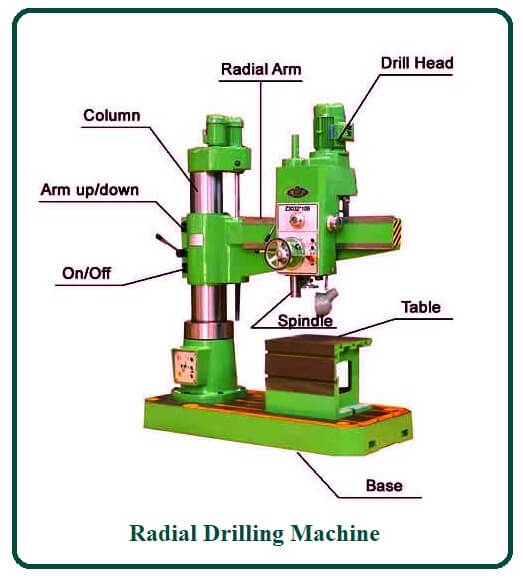 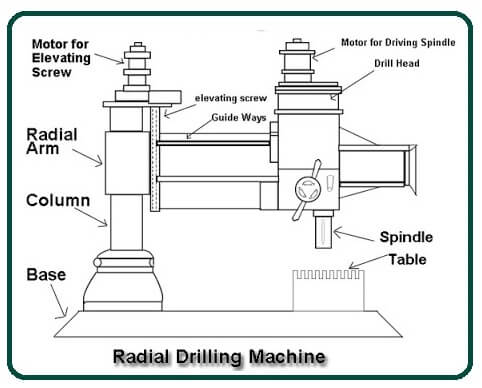 This is the bottommost part of the radial drilling machine. It is made of cast iron because cast iron has high corrosive strength. The base is used to support the assembly of parts on it. It also absorbs vibrations and shocks induced by machine parts.

There is a column at one end of the base. It is a vertical column that acts as a support to rotate the radial arm in 360 degrees.

It is placed above the column. It is provided with a slot to mount the workpiece directly to its face. It is usually round or rectangular in shape.

This is the part that is attached to the column. This part can rotate 360 ​​degrees around the column. The face of the radial arm is accurately machined, and the head slides over it. This arm moves up and down the column. In larger machines, hydraulics are used to move the arm up and down.

The drill head is mounted on the radial arm and drives the drill spindle.
It engages all mechanisms to drive and feed the drill at different speeds.

The motor is present at the top of the drill head, which drives the horizontal axis.

Chick is present below the axis. It is used to hold the drill bit in its place.

Drill bits are used to drill holes in the workpiece. This is the part that rotates and enters the workpiece, creating holes.

Also, Read: Forging And Its Types

The bottommost part of a radial drilling machine is usually made of cast iron because cast iron has high corrosive strength. The column is present above the base. It is cylindrical in shape. The radial arm moves up and down the column and can also rotate in the columns.

The tables are placed above the base where the workpiece can be placed for the drilling process. The radial arm has a drill head. Various parts like a spindle, chuck, and motor are present in this drill head for the rotation of the drill bit.

The motor is present above the head, which rotates the axle. The spindle is attached to the drill heads and is present below the chuck axis. In the chuck, the drill bits are fixed, which is used to make holes in the workpiece and feed it into the workpiece.

Here, the different Applications of radial drilling machines are as follows