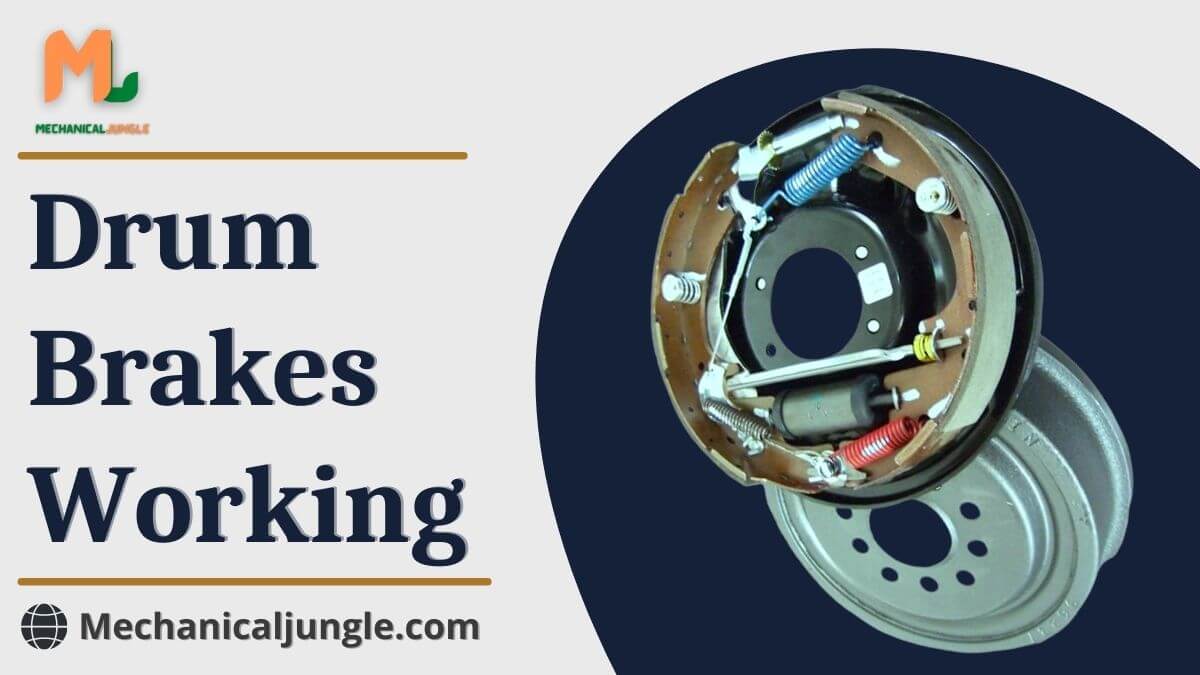 How Do Drum Brakes Work? 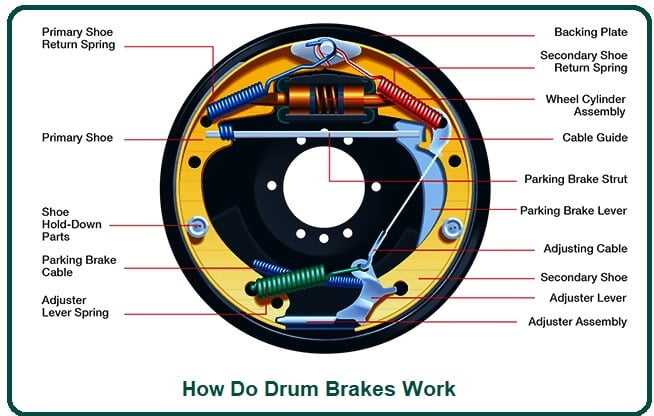 Unlike disc brakes, which use rotating discs with calipers and pads and are generally considered more effective and safer, drum brakes use a rotating cylinder to slow a vehicle with brake shoes. When the drivers press the brake pedals, the brake fluid generates hydraulic pressure and presses the brake shoe against the rotating drum.

The shoes are made of friction-causing materials, which ultimately slows down the vehicle. Over the past few decades, disc brakes have outpaced drum brakes as it is the stopping force of choice for most new automakers.

It is still possibles to buy a new car with drum brakes, but they are generally only used on the rear wheels with disc brakes on the front wheels.

Forces of friction that come into action make the shoe fit around the drum. The latter action is prevented by pins and cams. Hence the pin is called the anchorage pin. The magnitude of the friction forces, multiplied by the radius of the drum, gives the torque to stop the drum, that is, the breaking torque.

The entire mechanical linkage between the brake paddles and the shoes operates to transmit and multiply the pedal force to the brake shoes. The paddle force through the leverage produces an effective braking force against the drum.

A retreating spring is placed between the breaking shoes. These retracting springs pull the shoe away from the drum when the cam is turned and moved to the release position. This system in which shoes are placed to rub against the inner surface of the brake drum is called the internal extension brake.

In this system, each part of the linkages must be free to move. The joints must be properly lubricated to reduces friction & wear. Otherwise, uncertain and uneven braking action may result. As the brake pedals are pressed, it compresses the fluid in the master cylinder & allows the piston of the wheel cylinder to extend outward.

As the forces are removed from the brake paddle, the retractor springs pull the brake shoe inward, and contact between the friction lining and the drum is eliminated. Now preparations are made to apply the brakes again. 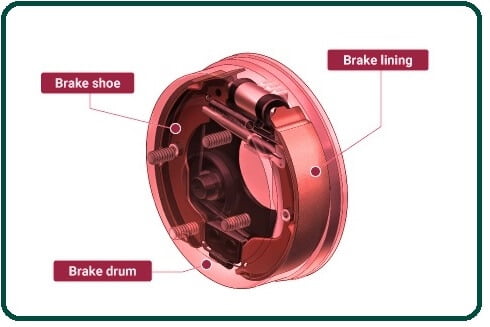 This friction converts kinetic energy into thermals energy. Drum rotation helps suppress the shoe and lining against the drum, offering better braking force than disc brakes. On the others hand, it is very important to design components so that heat is efficiently dissipated in the atmosphere by thermal energy.

There are three types of drum brake, depending on how the brake shoes are pressed on the drum; Leading/trailing shoe type, twin leading shoe type, and duo-servo type. 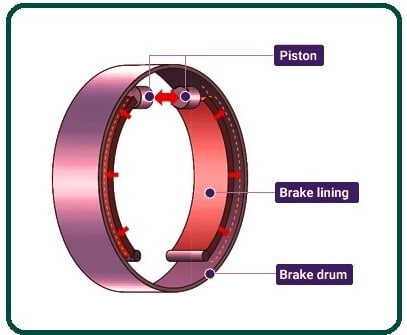 The drum brake is a brake system with a brake drum (rotor) that rotates with the wheels. Inside each drum are fitted shoes with brake linings (friction material). Pistons (pressure mechanisms) press from inside the drum to generate braking force, thus making it possible to stop and stop the vehicle. 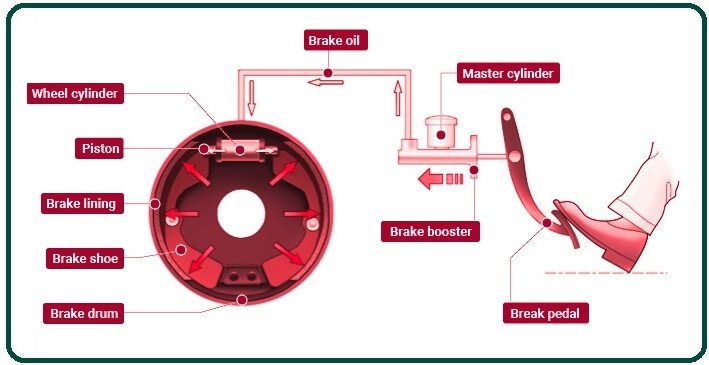 When the driver steps on the brake pedals, the powers are amplified by the brake booster (servo system) and converted to hydraulic pressure (oil pressure) by the master cylinder. The pressure reaches the brake on the wheels through a tubing filled with brake oil (brake fluid).

The distributed pressure pushes the piston on the brakes of the four wheels. Piston brake drums, which are friction materials, press against the inner surfaces of the brake drum that rotate with the wheels.

The linings are pressed onto rotating drums, which in turn lower the wheels, causing the vehicle to slow down and stop the vehicle.

“Leadings (or primary) shoe” is a term referring to a shoe that moves in the direction of rotation when pressed towards the drum. The second shoe is called the “trailing (secondary) shoe.” The leading shoes are pressed in the same directions as the rotation of the drum, and this rotation helps to press the over-pressured shoe against the drum for stronger braking force.

This is called the self-boosting effect that realizes the powerful braking forces of the drum brake. Structurally, it has a piston with a wheel cylinder housing with which hydraulic pressure is generated to push two shoes against the inner surface of the drum.

This is because drum brakes produce the same braking force in both directions. Typically, this type is used for the rear brake of passenger cars.

Such drum brakes have a two-wheel cylinder and two leading shoes. Each wheel cylinder pressure on one shoe so that both shoes act as a lead when the vehicle is moving, providing better braking force.

Each piston placed in the wheel cylinder is displaced in one direction, so when the vehicle is in reverse, the two shoes act as a rear tread. These types are mainly used for front brakes in small-to-medium-sized trucks.

The type of dual twin leading shoe consists of pistons that migrate in both directions, making it possible for both shoes to act as the leading regardless of the direction of travel. This type is mainly used for rear brakes of small-to-medium size trucks.

Here, the different Advantages of a drum brake system are as follows

Here, the different Disadvantages of a drum brake system are as follows

How Do Drum Brakes Work?

How Does Drum Brake Work?

The friction between the brake linings and the drum causes the drum to stop rotating; thereby stopping the wheel. When you release the brake pedal, the retracting springs bring the brake shoes back to their original position. This results in a gap between them and the drum and to again spin it freely.

The pistons press the brake linings, which are friction materials, against the inside surfaces of the brake drums which rotate with the wheels. The linings are pressed on the rotating drums, which in turn decelerate the wheels, thereby slowing down and stopping the vehicle.

There are three types of drum brakes depending on how the brake shoes are pressed onto the drums; leading/trailing shoe type, twin leading shoe type, and duo-servo type.