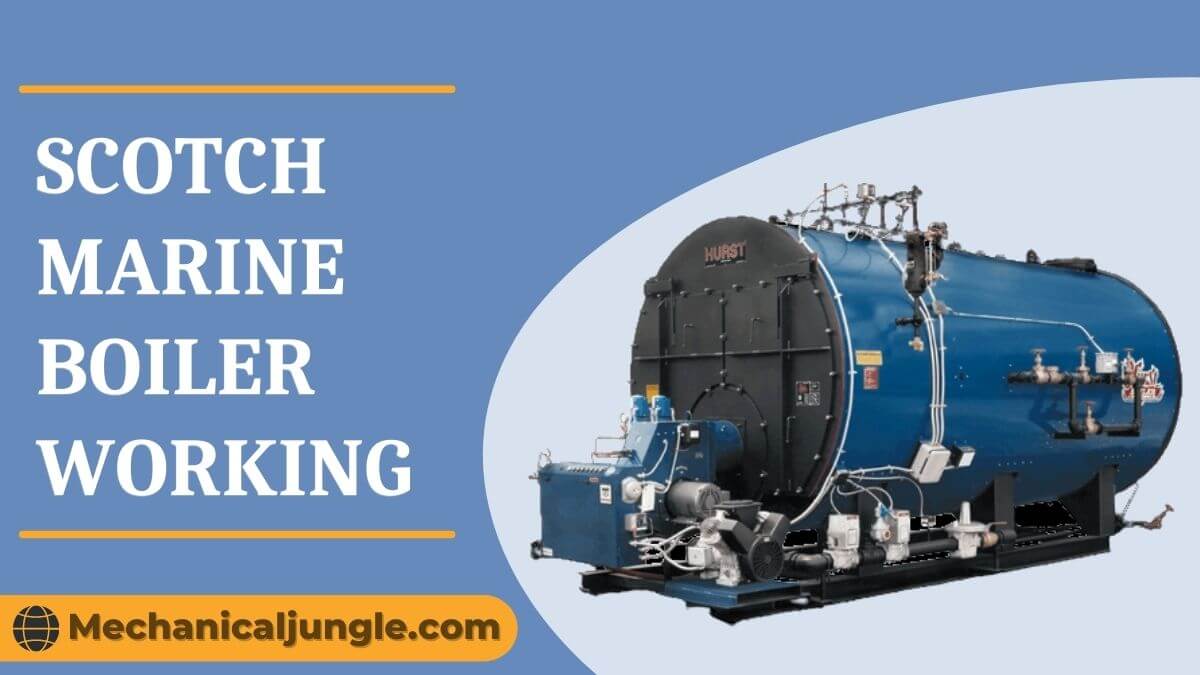 What Is Scotch Marine Boiler? 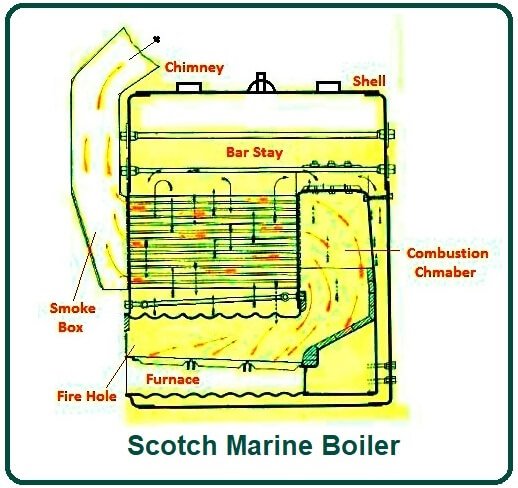 Scotch marine boiler is a common boiler commonly used on ships in marine works. These boilers are a type of fire-tube boiler. Scotch or tank-type marine steam boilers are used for marine works, in particular, because of their compactness, efficiency in operation, & ability to use any type of water.

It does not require a brickworks setting and external flues. In this article, we will learn about the construction, working, advantages, and application of Scotch marine boilers.

It is the most common boiler used on ships in marine works. It is a type of fire-tube boiler. After readings these articles, you will be able to know their construction. 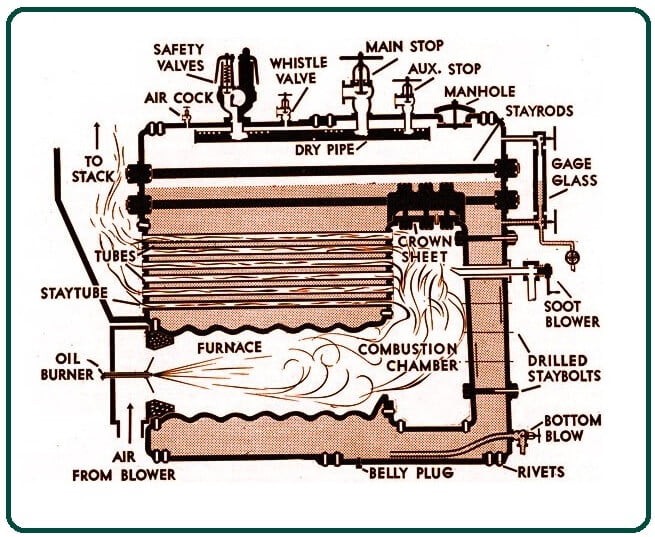 There are two main types of Scotch Marine Boilers:-

This boiler consists of a circular boiler shell of a large diameter and a short length. Single-end Scotch boilers have a distance of up to 3.5 meters. It consists of one to four furnaces, and these furnaces enter from the front end of the boiler. The Scotch boiler was a very common marine boiler used in steamships in many countries.

Older double-ended Scotch Marine boilers typically had vertical Galloway tubes manufactured in the combustion chamber. They were meant to promote the circulation of water in the boiler and thus contribute to reducing stresses in the material.

The following are the important manufacturing parts of Scotch marine boilers:-

It is space above the Greater & below the boiler; it is employed to burn solid fuel inside the boiler. Single-ended boilers are fired with four furnaces. The furnaces are usually corrugated for strength.

In thises type of boiler, each furnace has its own combustion chambers. It is used to burn fuel inside the boiler. A single-ended Scotch marine boiler is fired with four furnaces.

The furnaces are usually corrugated for strength. Each furnace has its own combustion chamber.

This is the space, usually below the boiler shell, to burn fuel so that water kept in the shell can generate steam. The combustion chamber consists of a fine plate, which needs to be in place, i.e., the top plate, the backplate, two side plates, and the tube plate.

It is a part of the boiler where fuel combustion takes place. The combustion chamber consists of fine plates, which need to remain, i.e., the top plate, backplate, two side plates, and tube plates.

There are several horizontally placed smoke taps that connect the combustion chamber to the chimney.

The heat generated in combustion chambers is used to heat the water around the combustion chamber. Water is converted into steam, and it is supplied to the steam turbine. The exhaust gases after combustion pass through the smoke tubes and reach the chimney.

The chimney releases these fumes and exhaust gases into the atmosphere. It has a drum of diameter from 2–5 to 3–5 m which is placed horizontally. These steam boilers can be single-ended or double-ended. Single steam boilers can have lengths of up to 3–5 meters, while those for double-ends can be up to 6–5 meters.

The furnaces are usually corrugated for strength. Each furnace has its own combustion chamber. The combustion chamber consists of a fine flat plate that needs to be in place, i.e., the top plate, backplate, two side plates, & the tube plate.

There are several horizontally placed smoke taps & that connect the combustion chamber to the chimney. The front & backplates of the shell are reinforced by longitudinal occupancy.

The wall of the combustion chamber is from the best heating surface. The furnace tube, smoke tube, and combustion chamber, all being surrounded by water, give a very large heatings surface area in proportion to the cubical size of the boiler.

Here, the different Advantages of the scotch marine boiler are as follows

Here, the different Applications of the scotch marine boiler are as follows

Here, the different Disadvantages of the scotch marine boiler are as follows

Our two-pass, three-pass or four-pass Scotch Marine(Fire Tube) boilers are available in dry back, wetback, steam, or hot water versions; from 15 to 800 hp with pressures to 300 PSIG. Hurst Scotch Marine boilers are rated to 81% minimum efficiency.

Water is surrounded by the tube. The heat generated is much high and due to that, even the tube gets hot. Due to the heated tubes, the water starts getting heated and its phase is 1st water to saturated steam and saturated steam to superheated steam.