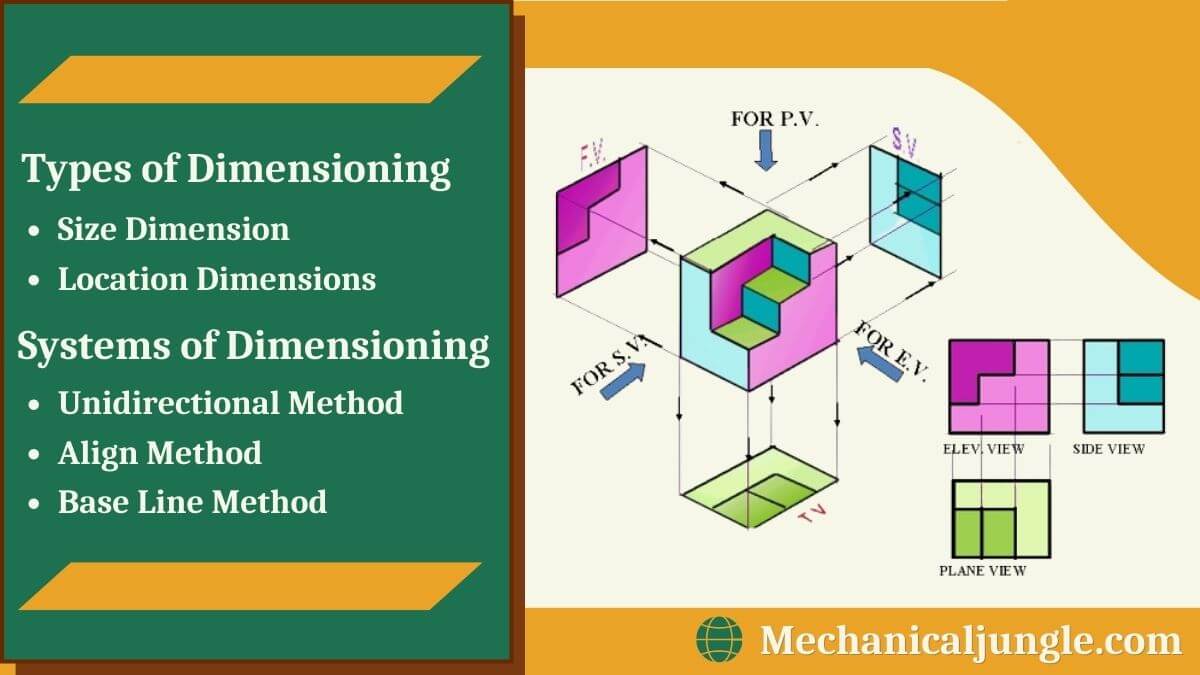 What Is Dimensioning and Its Types?

Basics type of dimension is linear, radial, angular, coordinate, and arc length. Use the DIM command to automatically create dimensions according to the object type you want to dimension. Dimension style allows you to quickly specify your conventions and maintain industry or project dimension standards.

How Many Types of Dimensioning Are There?

Dimensioning a drawing is about adding dimension, notes, & lines to a drawing. There are four methods: parallels, running, chains, & combined amplitude.

Some methods of dimensioning a drawing can produce an accumulated error. This occurs when multiple tolerance errors are added together.

What Is Meant by Dimensioning?

Dimension is the process of measuring the area or volume of an object. It is the method of calculating capacity for storing, handling, transporting, and invoicing goods. 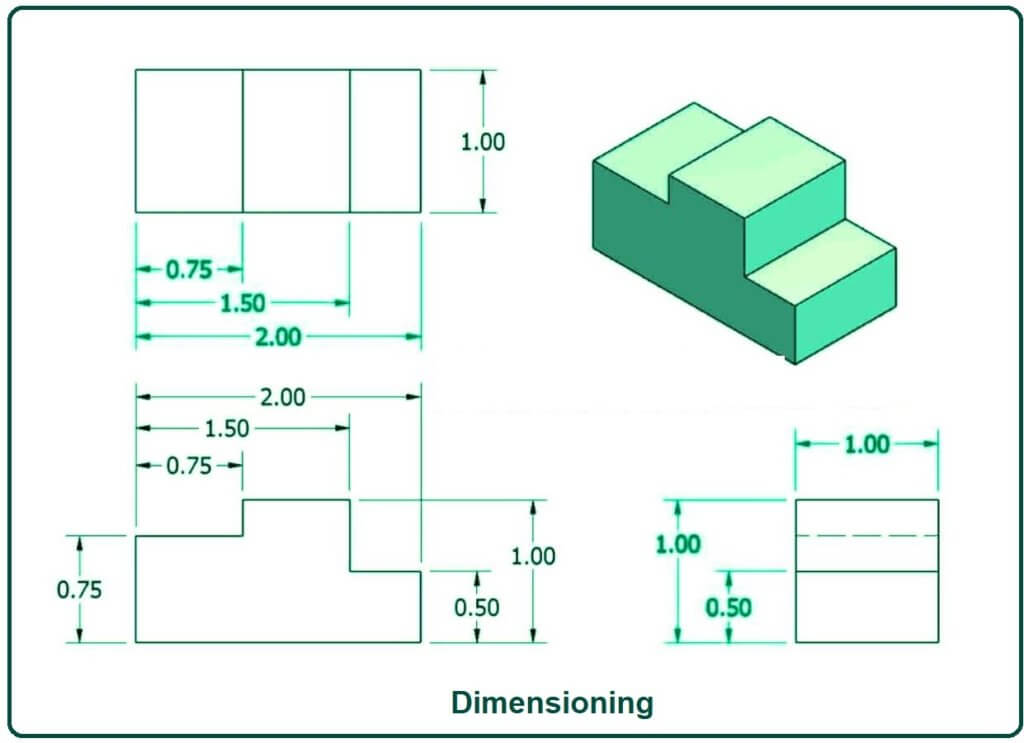 After preparing the sketch of any drawing, some information has to be written on it. For example, the distance between different surfaces, location of pores, number of holes, type of material, etc. Such information is presented as bylines, numerals, symbols, and notes.

Ther is two types of writing dimension on drawing.

After completing a drawing, the following sequence is to be kept in mind. It makes the picture beautiful. This also saves time.

The following are three systems of writing dimension.

This method is mostly used in dimensioning. In this method, the entire dimension is written in one direction throughout the drawing. This direction is usually perpendicular. 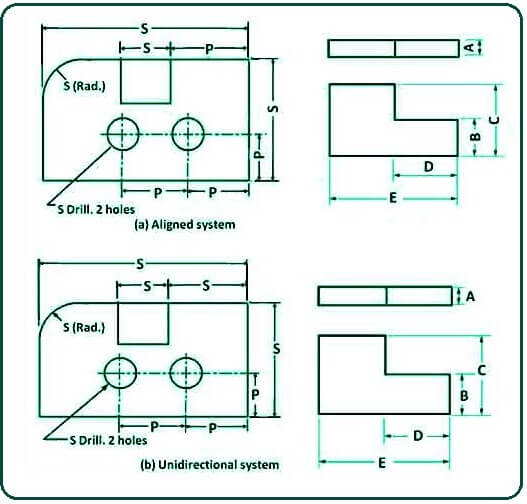 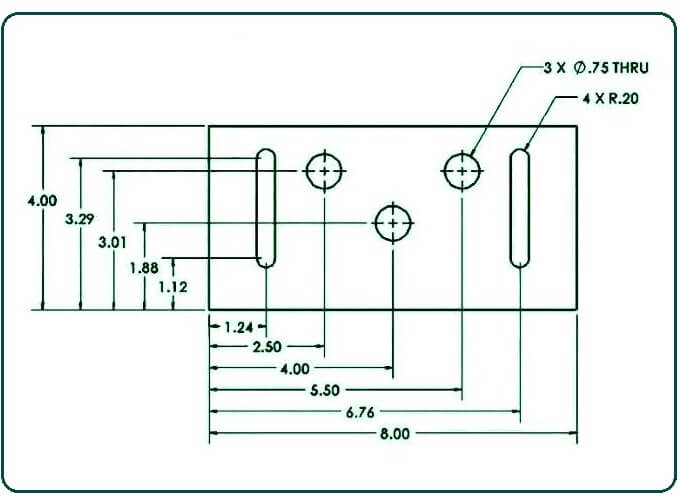 For any drawing to be practical, it is necessary that it has all the necessary dimensions written on it so that all the information can be used correctly. For this purpose, the following element is written below.

Dimension lines are drawn for a given dimension of an object. This line should be at distances of 10 mm to 15 mm from the object line. To write the dimension, this line is broken from the middle, and the dimension is written in the middle space. Alternatively, dimensions are written on it after its completion. For this, 2H or 4H pencils are used.

Lines that are drawn extending from the ends of a part of the drawing so that the dimension between them can be written are called extension lines. For this, 2H or 4H pencils are used. There should be distances of 1 mm between them & the objects line.

Such a line is used to represents the center of the cylindrical part of a picture. For example, a hole shaft, etc. It should be extended to a distance of 1 mm from the object line.

With the help of this line, a note or specification is written on an object. It is drawn with a 2H or 4H pencil. It consists of a circle & a leader. 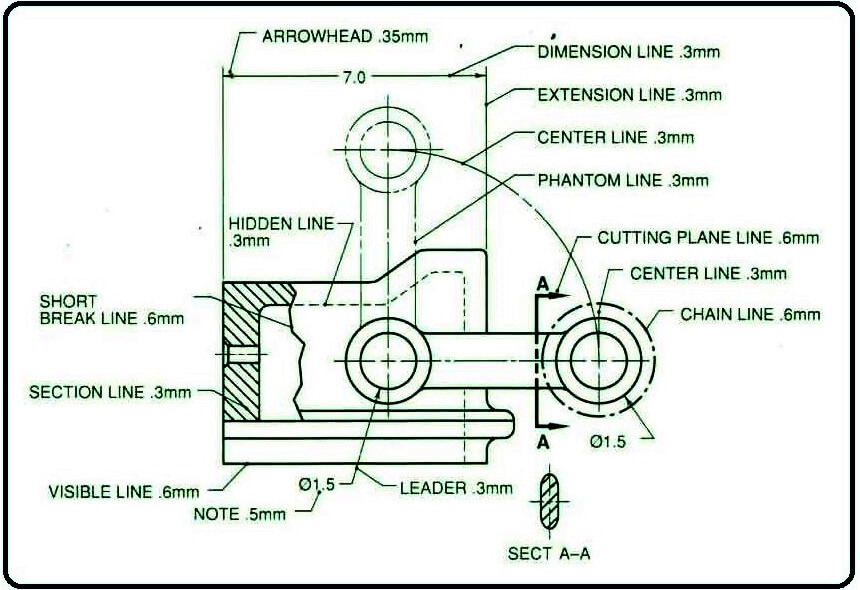 After the completion of any geometrical figure of an object, the writing of its shape is desired. Numbers are used for this. The height of the number is kept at 3 mm.

Under no circumstances should the extension and dimension lines intersect. When assigning dimensions after completing a drawing, it should be noted that no unit should be written with any number. Numbers should be clear, legible, and understandable. Circles, arcs, and perfects should correspond to the radius of their diameter.

If it is necessary to give dimensions to concentric circles, try drawing them on the front view and then write down their dimensions. Leaders’ lines should be used to write the dimensions of the circles, which should make their diameter clear. Ambiguous and complex dimensions should be avoided.

Dimensioning is the process of measuring either the area or the volume that an object occupies. It is the method of calculating capacity for the storage, handling, transporting, and invoicing of goods.

Dimensioning is the process of measuring either the area or the volume that an object occupies. It is the method of calculating capacity for the storage, handling, transporting, and invoicing of goods.

The basic types of dimensioning are linear, radial, angular, ordinate, and arc length. Use the DIM command to create dimensions automatically according to the object type that you want to dimension.

In three-dimensional space, the Cartesian coordinate system is based on three mutually perpendicular coordinate axes: the x-axis, the y-axis, and the z-axis illustrated below. The three axes intersect at the point called the origin.

In mathematics, analytic geometry (also called Cartesian geometry) describes every point in three-dimensional space by means of three coordinates. Three coordinate axes are given, each perpendicular to the other two at the origin, the point at which they cross. They are usually labeled x, y, and z.

Likewise, we can describe a point in 4-dimensional space with four numbers – x, y, z, and w – where the purple w-axis is at a right angle to the other regions; in other words, we can visualize 4 dimensions by squishing it down to three. Plotting four dimensions in the xyzw coordinate system.

One thing SOLIDWORKS users use every day is the Smart Dimension tool during sketching. Beginners often start the command by selecting it in the Sketch toolbar of the CommandManager.

You can create horizontal, vertical, aligned, and radial dimensions with the DIM command. The type of dimension depends on the object that you select and the direction in which you drag the dimension line. The following illustration demonstrates one method for using the DIM command.