To produce the energy for the aircraft engine, the turboshaft uses the same principle which turbojet used to fly the aircraft, and the compressor will be incorporated.

The prime difference between a turbojet engine and a turboshaft engine is that it has a power av section. Additionally, it consists of an output shaft and turbine, which have been incorporated into the design. 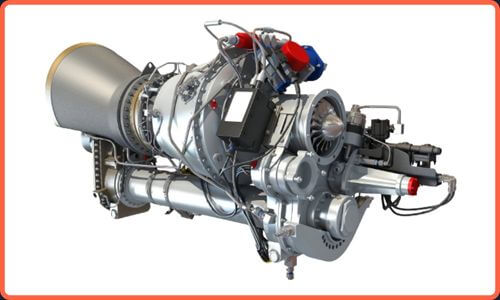 Engines like the turboshaft are the same as turbojet engines and also, it is similar to turboprop engines, but there are a few differences between them. The heat gets pill from the exhaust and then transferred into the shaft of the output.

Many cases have been seen where the power turbine is not mechanically linked with the generator gas. This “free power turbine.” Permit the speed of the power turbine to be optimized for each entry, which will energize without any help from the reduction gearbox which is in the engine.

Propellers can’t be operated by the turboshaft engine it is used to provide or to generate the power to the rotor which is used in the helicopters.

Many people have questioned why turboshaft engines are used in helicopters. The answer is that the engines, which are light in weight, small engines like gas turbines, generate more power than engines like pistons, and that’s why these helicopters are capable of lift.

How Does a Turboshaft Engine Work?

The main function of the engine turboshaft is to produce shaft power. In a complex machine like a helicopter, the shaft engine produces the shaft power required to run the rotor.

The power shaft which will turn the engine rotor will receive power from the set of turbines. The turbine’s energy is absorbed by hot and high-pressure gas flowing over the blades.

How Does Rotor Get Power from Engine of Aircraft?

After this process, RPM gets reduced in the transmission from 1000 TO 100 RPM, and the torque will increase.

In simple language, a turbine is a turbo machine with one working part. That part is known as the rotor, which is also known as the shaft or drum, with the attached blades.

The gas compressor is the device, or we can say that it is the mechanical device that increases the gas pressure by reducing the

volume. Compressor air is nothing but a specific type of compressor gas.

Commonly, the transmission term is referred to as Gearbox.

The Gearbox used the gears and train gear to generate or produce the speed and the torque, which converted from a rotating power source to a different or another device.

Advantages and Disadvantages of Turboshaft Engine

A turboshaft engine is a variant of a jet engine that has been optimized to produce shaft power to drive machinery instead of producing thrust.

A turboshaft engine is a form of gas turbine optimized to produce shaft power rather than jet thrust. Conceptually, turboshaft engines are very similar to turbojets, with a further expansion of the turbine to extract heat energy from the exhaust gases and convert it into shaft power.

Small Turbine Engines PBS AEROSPACE production division is a manufacturer of aircraft turbojet engines. These engines use power generated by the continuous burning of a mixture of fuel and compressed air.

How Does a Turboshaft Engine Work?

As a variation of the gas turbine, turboshafts are very similar to turbojets. The operating principle is identical: atmospheric gases are ingested at the inlet, compressed, mixed with fuel, and combusted, then expanded through a turbine that powers the compressor.