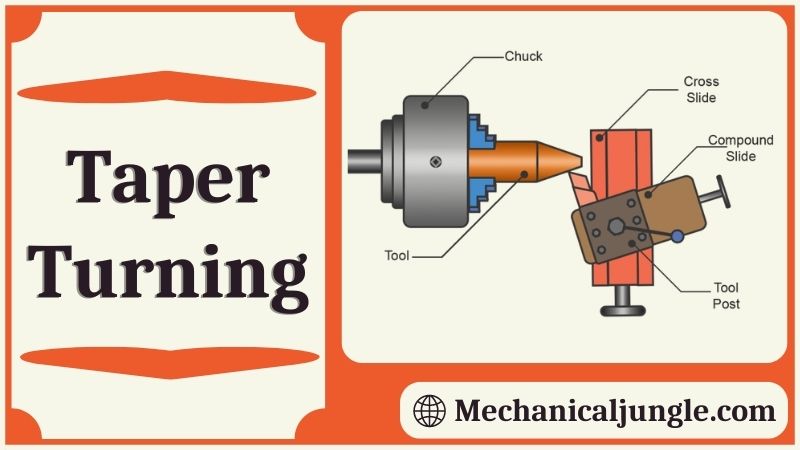 What Is Taper Turning?

In simple linear turns, the cutting tool moves along a line parallel to the axis of the workpiece so that the finished workpieces always have the same diameter. However, when cuttings the taper, the tool will move at an angle relative to the workpiece’s axis, resulting in the taper.

Taper turning is a machining operation, which means that the diameter of cylindrical workpieces gradually decreases from one part to another. The taper can be external or internal. If the workpiece is taped outward, it has an outer taper. If it is taped inward, it has an internal taper.

Taper Turning and Its Types:

The workpiece must be positioned in such a way as to make the taper such that the axis of rotation is at the angle to an axis of the bend. 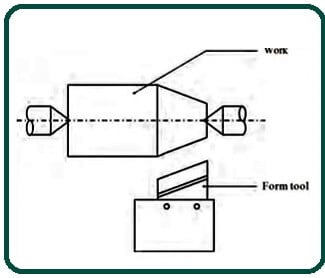 The form tool methods are one of the simplest methods to create a short taper. In this method, a broad form tool with a straight cutting edge is set to the work at a half taper angle & is fed directly into the workpiece. The tool used in thises method is called the taper turnings form tool. The tool itself is used in a tapered shape, creating a tapered workpiece.

In this method, the length of the taper should be less than the length of the tool cutting edge. Since the entire edge removes the metal, it will create huge vibrations and therefore requires a large force. This method is performed to reduce the required vibration and force at a slow rate. 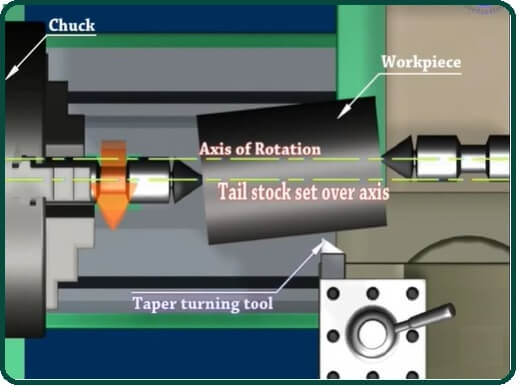 This method is commonly used when the angle of the tapers is very small. In thises method, the axis of rotation of the workpieces is shifted to the axis of the lathe at half an angle to the taper. 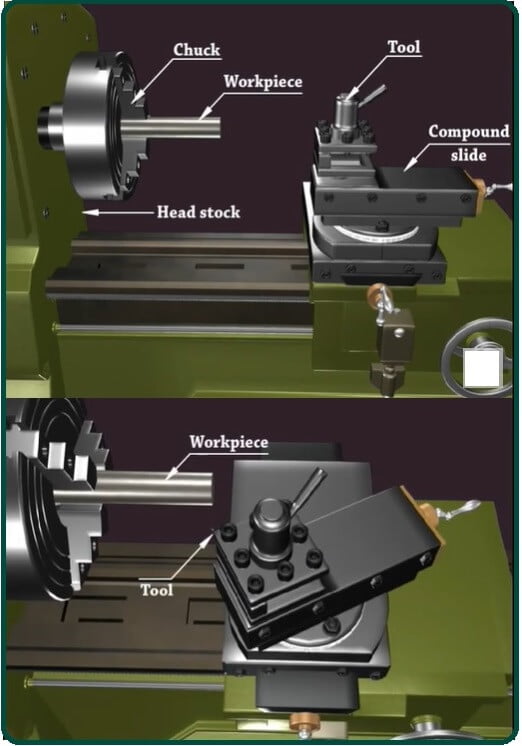 This method is typically used to produce short and steep cones. In this method, the compound rest is rotated at the required angle and held in position. The compound rest can be rotated up to 45 degrees. The workpiece is held in the chuck & will be rotated in the lathe axis.

Also, Read: Parts of Pull-Type Broach Tool | What Is a Broaching Tool? | Internal and External Broaching 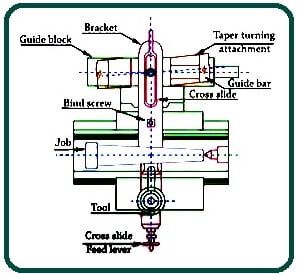 In this method, the taper bend is performed using an attachment. This attachment has a guide bar, & this guide bar is usually placed in the center. The guide bar can swing at any required angles of the taper. The tool moves parallels to the guide bar.

In this method, the workpieces are held in a chuck. It has a guide block that attaches to the back end of the cross-slide and runs on the guide bar.

In this method, the guide bar is set at an angle at which the workpiece is to be taped. By using the taper turning attachment method, taper turning of any size can be performed easily. The job is held either in Chak or in the centers, i.e., dead and Live center in the tempering process. The depth of cut is given by the compound rest handwheel.

It is an advanced tempering method. In some lathe machines, both longitudinal and cross feeds can be mounted simultaneously, causing the tool to be moved in a diagonal path and taper bent.

The diagonal path followed by the instrument is the result of two feeds. The direction of the tool can be changed by varying the feed rate of longitudinal and crossfeed. This method can only be operated by a skilled operator because it is very easy to do wrong in this method.

When the diameter of a lathe workpiece changes uniformly, from one end to the other, the piece is said to be tapered. Taper turning as a machining operation is the gradual reduction in diameter from one part of a cylindrical workpiece to another part. Tapers can be either external or internal.