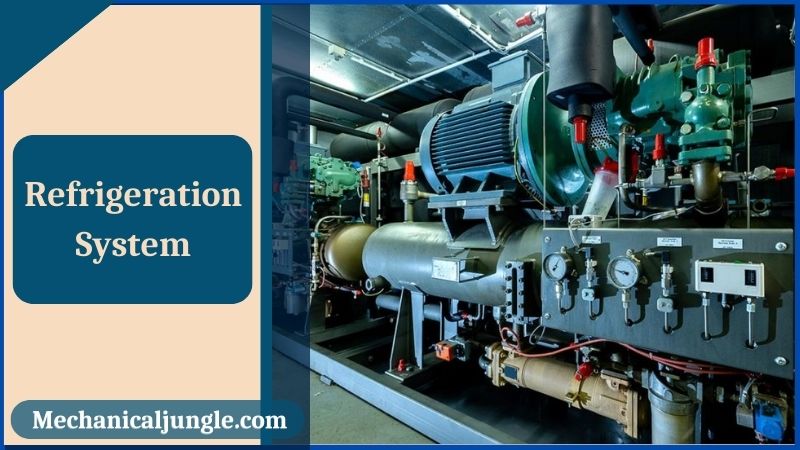 Why We Need a Refrigeration

Refrigeration, including air conditioning, is essential for life and will continue to expand worldwide. Its impact on the environment is huge, even though refrigeration technologies can be part of the solution to reduce global warming (new sources of energy, heat pumps).

However, the reduction of CO2 emissions and fluoride gas emissions are challenging to be addressed on an ongoing basis. Many attempts have already been made.

What Is Refrigeration System?

Refrigeration systems are an essential process in industry and home applications as they perform cooling or maintain room temperature at a desired value. A cycle of refrigeration consists of heat exchange, compression and expansion with a refrigerant flowing through the units within the cycle.

One way to achieve high heat transfer rates in compact heat exchangers is by using the mini chan technique. When considering this effect, both indirect effects due to energy consumption and carbon dioxide emissions as a result of the power generation process and direct effects due to the leakage of refrigerant must be taken into account.

In addition to high heat flux applications, as a suitable alternative to reduce the charge of refrigerants, reduce the problems of the release of potentially hazardous liquids into the atmosphere and allow the use of natural liquids such as hydrocarbons and carbon dioxide. Minichannels are seen in. 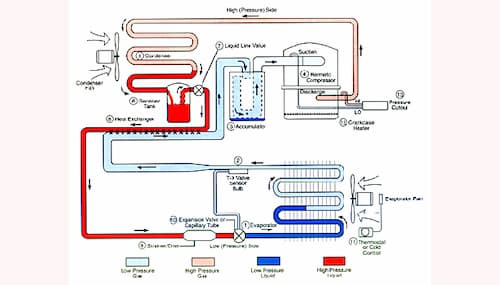 Looking at environmental protection, including standardization, terminology, mechanical safety, testing and rating equipment methods, sound levels, refrigerants, and refrigeration lubricant chemistry in the field of refrigeration and air conditioning. Refrigeration systems that are not covered by other ISO technical committees.

In the process of refrigeration, the available heat, along with the system of retaining at low temperatures, is continuously removed and transferred to the surrounding temperature, which is at higher temperatures.

The basic system of refrigeration is shown in fig. 6.1 in which T1 and T2 are the maximum and minimum temperature bodies, respectively; R is the refrigerator; Q1 is the heat supplied to the hot body, and Q2 is the heat extracted from the body with low temperature, And WR is the work required to produce low temperatures.

According to the second law of thermodynamics (Clausius theorem), it is only possible to remove heat from low temperatures to supply heat at high temperatures by supplying external work to the system under operation.

Therefore, a refrigerator needs external power to continuously remove heat from the cabinet to maintain a low temperature from the surroundings.

Difference Between Air Conditioning and Refrigeration

In energy, the system supplies thermal energy from one place to a high-temperature site, whereas in air conditioning, thermal energy is taken from the air to cool the air.

An AC consists of an indoor and exhaust unit connected to a pipe. The air is heated, compressed, condensed, and then dried, then the liquid gas is evaporated and cooled with the help of a condenser to give the cold air that we experience.

It can be seen flowing from a high-temperature location to a low-temperature bearing site. The use of heat pumps and refrigerator stores can be seen in all these types of appliances.

There is virtually no coolant that will fully satisfy the requirements: the cheapest coolant – water. But since the cold temperature is high (0 ° C), water is used only at positive temperatures in air conditioning systems and processes.

Aqueous solutions of NaCl, CaCl2, and MgCl2 – pickles are commonly used in negative temperatures. Thermophysical properties, including freezing temperature, depending on the concentration of salt in the brine.

On further cooling, the solution reaches a point at the Krogogradnoy point at which it freezes completely.

The explanation for the above types of Refrigeration cycles is as follows. 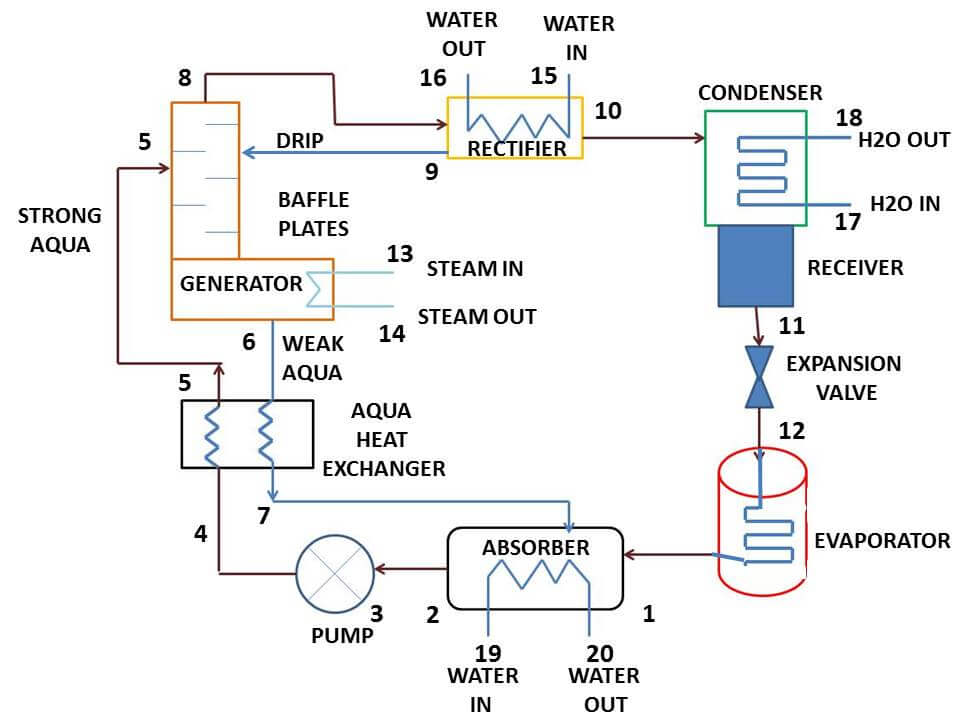 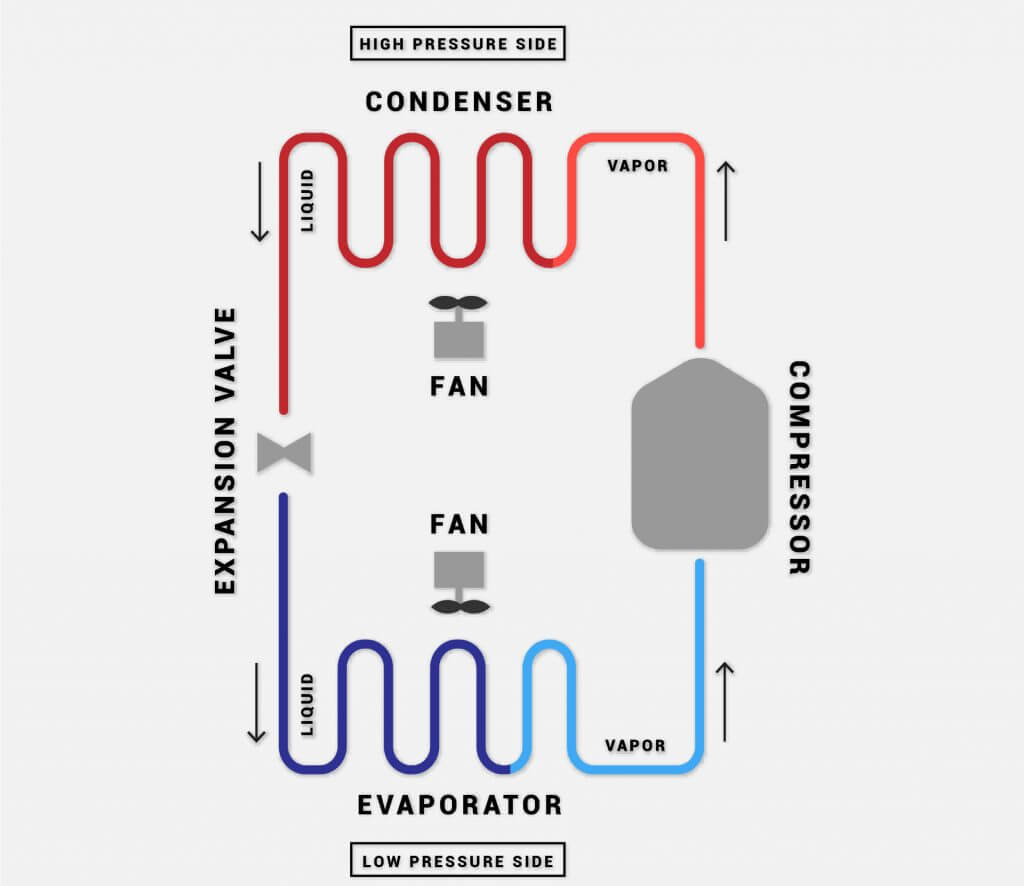 A liquid refrigerant is circulated through four stages of a closed system in a compression refrigeration cycle.

As the refrigerant turns, the heat is absorbed and expelled by the system, which lowers the temperature of the air-conditioned space.

As the refrigerant rotates through the system, it is alternately compressed and expanded, changing from a liquid to a vapor.

COP (coefficient of performance β) for an ideal refrigeration cycle is defined as the ratio of the heat removed per cycle (W) to remove this heat (QL​) from the substance to the work done per cycle.

If QH​ is the heat given to source at temperature TH​ , then by the first law of thermodynamics.

Refrigeration systems operate on a series of consecutive thermodynamic processes that form a cycle that returns the working substance to the same state.

A thermodynamic refrigeration cycle removes heat from a low-temperature object (refrigeration) and rejects it at a higher temperature. 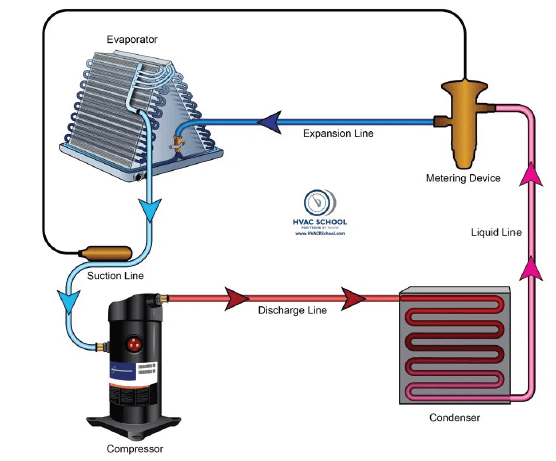 Refrigerants are liquids used in the commercial HVAC field that transfer heat from one source to another.

Or in a typical residential partition air conditioner system, the refrigerant is used to remove heat from indoor air and transfer that heat to the street through the use of Conner.

For example, refrigerant is used in water-cooled chillers to extract heat from cold water and transfer heat to condensate water.

The main requirement for a fluid to be classified as a refrigerant is the ability to transfer heat.

Refrigerants must also be safe in order to be used for commercial and residential air conditioning purposes.

Refrigerants are classified by the following information:

The flammability and toxicity classifications are shown in ASHRAE 15. Be familiar with ASHRAE 15

Refrigerants can be split into four different types,

Mechanical refrigeration, often referred to simply as refrigeration, is a process by which heat is removed from a location using a man-made heat-exchange system.

The system of refrigeration can be cyclic, non-cyclic, thermoelectric, or magnetic, depending on the application for which refrigeration is needed.

The term refrigeration means cooling a space, substance or system to lower and/or maintain its temperature below the ambient one (while the removed heat is rejected at a higher temperature). In other words, refrigeration is artificial (human-made) cooling.

An air conditioner works using a thermodynamic cycle called the refrigeration cycle. It does this by changing the pressure and state of the refrigerant to absorb or release heat. The refrigerant (aka coolant) absorbs heat from the inside of your home and then pumps it outside.

For more than a century, industrial air conditioning has been used for drying, humidity control, and dust and smoke abatement. Refrigeration is the process of lowering the temperature of a substance below that of its surroundings and includes the production of chilled water for air conditioning or process applications.

Difference Between Air Conditioning and Refrigeration

Refrigeration systems circulate cool liquids and gases through a series of tubes and vents.

Refrigerants are coolants used for reaching low temperatures by undergoing phase change between liquid and gas.

Halomethanes were frequently used, most often R-12 and R-22, often with liquified propane or other haloalkanes like R-134a.

An ammonia refrigerator works in the same basic way that most other refrigeration systems operate.

The ammonia refrigeration cycle begins with bringing in warm air, stripping the heat out of it, and then sending the cooled air back where it needs to be.

In an ideal vapor-compression refrigeration cycle, the refrigerant enters the compressor as a saturated vapor and is cooled to the saturated liquid state in the condenser.

It is then throttled to the evaporator pressure and vaporizes as it absorbs heat from the refrigerated space.

The compressor is widely considered the engine of the refrigeration cycle; it consumes the most power out of the HVAC system’s components and forces the refrigerant through the system.

The mini compressor has features of the lightest weight, smallest size and extraordinary efficiency to satisfy the growing refrigeration compressor market nowadays. Micro compressor has as much as 110-360W of cooling capacity under standard ASHRAE conditions.

The cooling cycle of a heat pump is used to cool a space by removing heat from it and expelling it to another area, usually to the outdoors for air conditioning or to the room for a refrigerator. The cold refrigerant absorbs heat from the hotter room in the evaporator, so the room will cool down.

The refrigeration cycle is based on the long-known physical principle that a liquid expanding into a gas extracts heat from the surrounding substance or area.

That’s because the liquid in which you dipped it is evaporating, and as it does, it extracts heat from the skin of the finger and air around it.