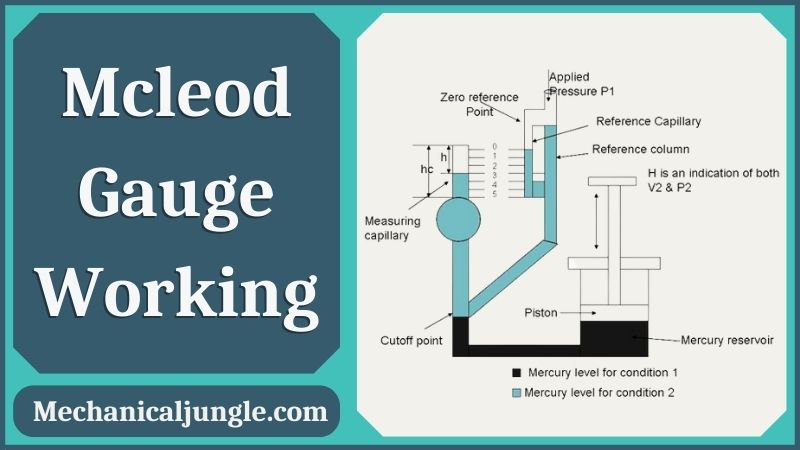 What Is Mcleod Gauge?

A Mcleod gauge is a device used to measure very low pressures at approximately 10-6  torr. The device is named after its inventor, Herbert Mcleod. It was invented by Herbert McLeod in the year 1874.

The size of the mac load gauge is similar to that of a mercury manometer which is the most common instrument used for the measurement of pressure. This Mcleod gauge also has mercury inside it, and the pressure measurement is done by observing changes in the mercury level. 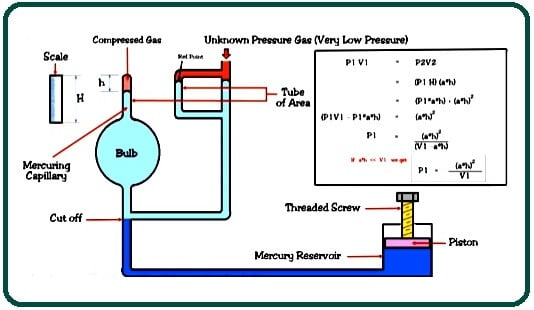 The Mercury reservoir is used to store mercury which can be used to measure the pressure in the mac load gauge.

A piston is used to increase or decrease the level of mercury in the measuring capillary, bulb, reference column, and reference capillary.

It is connected with the bulb and the measurement capillary reference column. The McLeod gauge is designed in such a way that there will be some space left in the measuring capillary when the mercury reaches the zero-degree point.

The point where the measuring capillary and the reference column meet is called the cut-off point. This is called the cut-off point because when the mercury level is raised above this point, the penetration of the applied pressure from the reference column to the measuring capillary and bulb will be cut off.

The known volume of the gas is compressed into a small volume whose final value provides an indication of the applied pressure. The Mcleod gauge works on the principle of Boyle’s law. Boyle’s law states that if the temperature and volume of gas remain unchanged, the absolute pressures exerted by a given mass of gas are inversely proportional to its volume.

According to Boyle’s law:

The Macleod gauge works by taking a sample of the gas from the vacuum chamber and then tilting it and infecting it with mercury. As in this Mcleod gauge, the pressures are calculated using Boyle’s law. Therefore, we must first pressurize a known amount of gas.

So the pressure we want to measure, or the initial pressure (P1), is applied at the top of the reference column. The mercury levels are raised by pressing the piston down. As the pistons are pressed down, the mercury level in the mercury reservoir decreases, and the level of mercury in the measuring capillary increases.

The level of mercury in measuring capillary is brought just below the cut-off point, & at this point, the applied pressure fills the bulb & capillary.

Mcleod gauge is independent of gas composition. If, however, the gas contains condensate material and condenses during compression, the gauge reading is defective. The gauge is not able to read continuously, and the scale is of the class method type.

For linearizing the scale at comparatively higher pressures, a second volume is introduced, as shown in the figure below, where the scale has shown is linear. 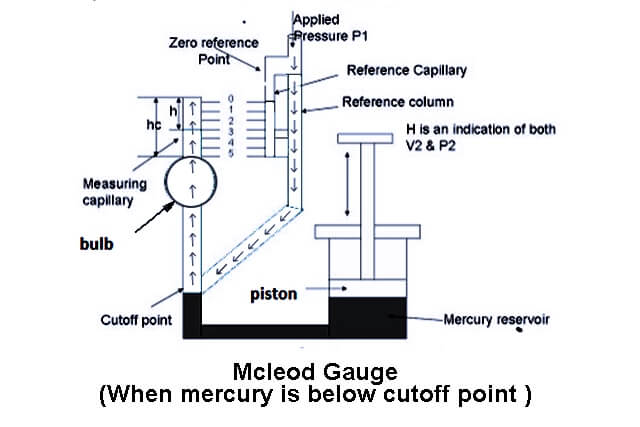 When we were raising the mercury level to the cut-off point, we mentioned measuring the amount of gas in the bulb and the capillary. This volume is called the initial volume. 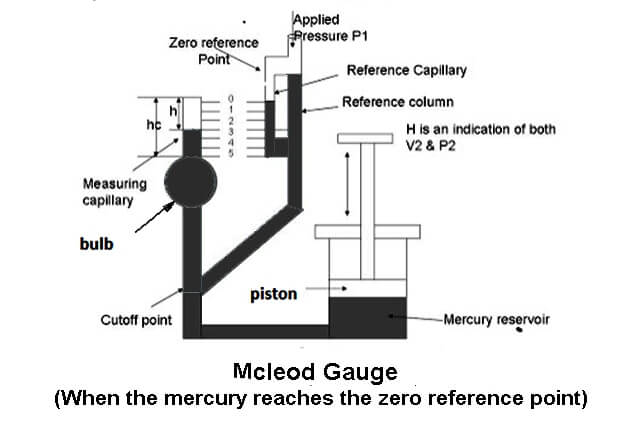 The difference in the height of the measuring capillary and the reference capillaries, which is denoted by “h,” is a measure of volume & pressure of the trapped gas.

After this, we know the final volume (V2), final pressure (P2), and we already know the initial volume (V1). From these values, we will find initials pressure (P1) using Boyle’s Law:

Initial or applied pressures of the gas ( P1 ) = Unknown

When the mercury reaches the zero reference points in the reference capillary, final volume (V2) = ah.

Final pressure ( P2 ) = P1 + h
Now we have the required values of known pressure and volumes. Now we will put these values in the equation of Boyle’s Law.

So in this way, P1, i.e., the initial pressures, can be measured using Mcleod Gauge.

What Is Mcleod Gauge?

McLeod manometer is a device for measuring very low pressure. The McLeod valve consists of a system of glass tubes in which a known volume of gas is confined at an unknown pressure and then compressed isothermally by a rising column of mercury.

The McLeod gauge takes advantage of Boyle’s law (the product of pressure and volume for a given quantity of gas remains constant if a constant temperature is maintained) to determine gas pressure within a range of 10 to 10–6 torr.

Mcleod Gauge works on the principle of Boyle’s Law. Boyle’s Law states that if the temperature and amount of gas remain unchanged, the absolute pressure exerted by a given mass of gas is inversely proportional to the volume it occupies.