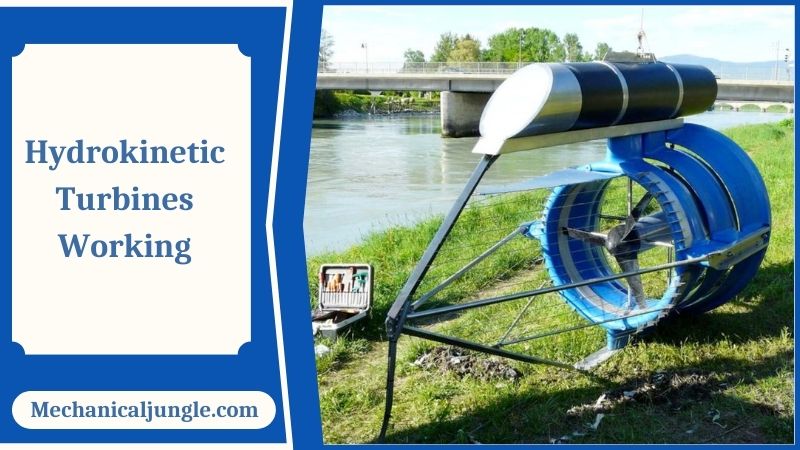 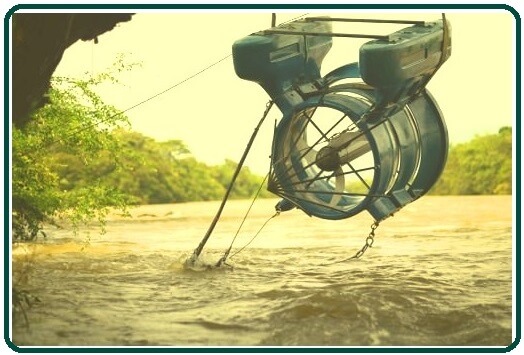 Hydrokinetic turbines provide a clean source of renewable energy that can substantially reduce the carbon footprint of off-grid locations, especially when they rely on diesel fuel transported by wind or land. Many remote communities are not connected to the electricity grid & are forced to use diesel generators for electricity generation.

Most diesel has to be imported and stored for a long time, especially in winter. It was expensive. Any reductions in the running times of these types of diesel generators through renewable energy equipment not only save amounts of money but also reduce CO2 emissions, minimize environmental damage from spills, and create additional capacity and employment.

Turbines are to be placed underwater, in a fixed, floating, anchored, or towed configuration, at any location where the effective water current flows, preferably with a minimum speed of approximately 0.25m/s.

Hydrokinetics turbines, a class of renewables energy devices, offer ways to obtain the energy of running water without the need for traditional hydroelectric facilities such as dams and penstocks. Hydrokinetic technologies are developed for installation in natural streams, such as rivers, ocean currents, tidal estuaries, and also in some man-made waterways & canals.

In ocean-energy structures, hydrokinetics turbines can be arranged in multi-unit arrays that can extract energy from tidal and ocean currents, like a wind farm. Efforts have been made to develop new renewable energy industries and markets with the potential to harness potential renewable energy resources, including low-top hydroelectric and hydrokinetic (HK for short) power in water flows and waves.

However, a relatively small fraction of this capability has been used or developed precisely in the world. Low head hydropower is defined as power generation equipment that circulates a permanent volume of water over relatively low-pressure heads (up to 30 m).

More precisely, hydrokinetics turbines fall into the “zero-head” class whereby energy is transferred from the kinetic energy of the water flow, as in wind turbines, rather than the potential energy of falling water. Hydrokinetic systems can be used in rivers or free-flowing streams.

Certain conditions provide scenarios for installing hydrokinetic turbines such as hydraulic structures in rivers, irrigation canals, low-altitude dams, gauging weirs, etc. These turbines can be installed along canals where there are suitable conditions for flow volume, velocity, and flow reliability.

Hydrokinetics turbines allow new applications & new potential in previously undiscovered areas such as a long flat river or canal section in which conventional hydro turbines do not exist in the form of available potential energy. By extracting these forms of energy, hydrokinetic energy generation avoids many of the challenges present in conventional hydroelectric units, including high civil work costs and the potential energy overhead required.

Hydrokinetic turbines are among the oldest hydroelectric systems; However, the development of these systems can be divided into periods, from the Waterwheels concepts to the more recent modernized pilot plants and experiments. Today, technological advances are increasing with many hydrokinetic designs through river, tidal, and wave power systems.

Hydrokinetic turbines harness the kinetic energy of flowing water. This is an area in development. In light of this, these innovative companies are developing new technologies in this field !! The Cézanne Turbine is an axial HT, 18 m diameter installed in Strangford (Ireland) with a rated power of 1.2 MW and a power output of 6000 MW/year.

Verdant Power Turbine is an axial HT, 5 m in diameter, 35 kW of power, and has a power coefficient between 0.38 and 0.44; Installed 6 HTs in East River, New York, generate 70 MWh of electricity. The HT can also be used to power off-grid irrigation pumps, such as the axial HT in Nieva (Colombia), which is 1 m in diameter and 1.1 kW of power, similar to spiral pumps. Another example is the Darius Turbine, 3 m in diameter and 10.9 kW, installed in the Rosa Canal (USA).

The installation of HT may produce some minor environmental impacts, such as blocking navigation and fishing; Turbine components, noise, and vibration can affect river habitat, although fish mortality through HT is usually very low, as fish tend to avoid HT.

Although the structural requirements are minimal, the cavitation and high installation cost per kW remain an open research topic. Since HT technology is in its infancy, costs can vary greatly between different installations.

For example, in relation to 700 $/kW of a similar wind turbine, the cost of a 500 kW HT was estimated to be between 950–1150 $/kW. The US Department of Energy has defined a one-level cost of energy (LCOE) calculation method to allow comparisons across HEC technologies, ranging between 25 and 80 cents/kWh.

HK turbines have a relatively simple design without the need for a reservoir or spillway. Preliminary testing indicates that adverse environmental impacts are minimal, & the simplicity of these designs results in low-cost installation & maintenance.

Therefore, this simplicity makes these systems valuables in rural or remote areas. In the following figures, you can see the flow conditions of hydrokinetic turbines. 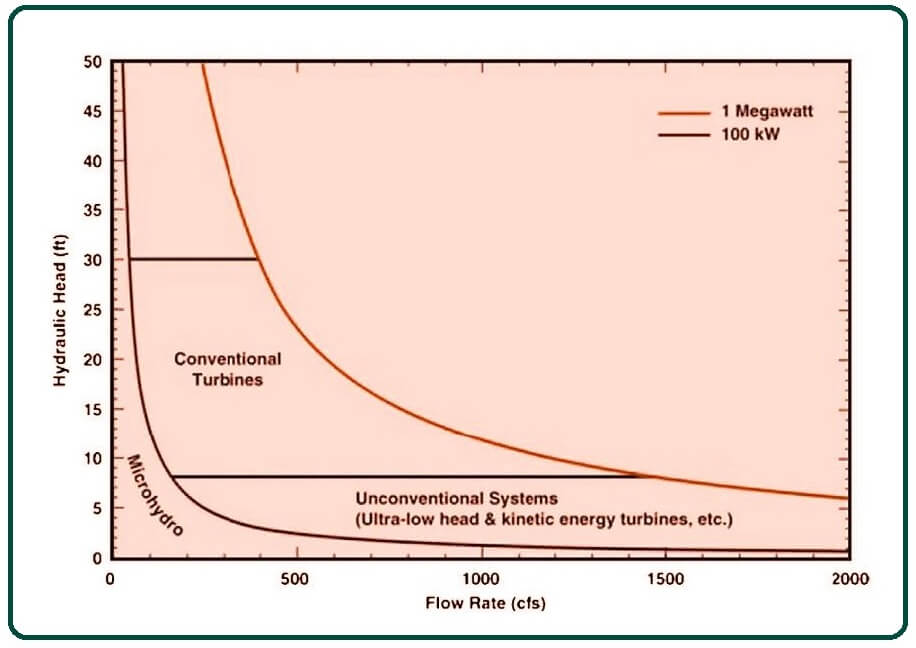 The two main schemes where hydrokinetic turbines can be used in power generation systems are tidal current and river current. The ocean current represents another potential ocean energy source in which the flow is unidirectional, as opposed to bidirectional tidal variations.

In addition, other resources include irrigation canals, man-made canals, and industrial outflows. While all hydrokinetic devices operate on the same principles of energy conversion regardless of their application areas, some differences exist in their design and operational features.

The design includes the following items:

To achieve economic efficiencies, tidal currents turbines can be designed for a greater capacity of several megawatts. River turbines, on the other hand, are considered to be in the range of several kilowatts to several hundred kilowatts.

The flow of the river is unidirectional, & this eliminates the need for rotor yawning. But in tidal currents, if a yaw/pitch mechanism is present, the turbine can operate during both floods and upsurges.

Depending on the cross-sections of the canals, a tidal or river current turbine may be installed only in floating structures such as seabed/river banks or in other configurations. This is due to technical means and power generation capacity and non-technical fishing, shipping, and recreational boating constraints.

The operation can be evaluated in the form of the following items:

The characteristic of river flow is quite different from that of tidal currents. While river flows have great stochastic variation seasonal to daily, tidal currents are subject to fluctuations of their periodic nature daily to semi-daily.

The density of seawaters is higher than that of freshwater. This means that the tidal turbine unit has less power generation capacity when located in a river stream.

Additionally, the amount of energy in seawater can vary depending on salinity and temperature at different sites and times.

Tidal conditions are almost entirely predictable, & available charts can be applied to determine the operation of a tidal power unit. But, for river stream turbines, conditions are more complex to predict, and such adjustments may not occur in many geographic areas.

For hydrokinetic turbines, the amount of output power is directly related to the flow velocity. Despite the available information on volumetric flow, the velocity of water may vary from one location to another due to the cross-sectional area.

While tidal turbines can be used in large-scale applications similar to large wind farms, river stream turbines can be installed to provide power for remote areas or off-grid loads.

It is anticipated that these technologies will present similar network integration challenges to wind turbines and will benefit from greater resource forecasting.

The output power of hydrokinetic turbines is dependent on flow speed, similar to wind turbines. The power densities are givens by the following equations:

and the output powers are:

It considers losses dues to Betz law & the losses in the internals sections. The Cp of a practicals system is typically approximately 0.35. Hydrokinetic turbines with a fluid velocity of about 2–3 m/s may annually provide up to four times more energy per squares meter of a rotor-swept area than wind turbines with similarly rated powers.

Although harnessing tidal energy may be expensive, utilization of these high energy sources compensates more than the higher costs. Power performance tests are performed to find the overalls powers coefficients in a range of tip speed ratios.

The output powers gained from angulars velocities (ω in (rad/s)) & torques (τ in (N.m)) measurements are compared to the available powers density of hydrokinetic turbines to obtains the coefficients of the overall power as the following equations:

The turbine power coefficients depend on the Reynolds number in terms of chord length & the ratios of projected rotors area to flow section area, known as blockage ratios.

Majors types of hydrokinetic turbines are described here. Classification is done by rotational axis orientation according to the water flow direction.

Horizontal (axial) axis The rotation axis of the turbine is parallel to the direction of flow. The rotor plane is perpendicular to the flow to achieve suitable power conversion efficiencies.

Inclined axis turbines are often implemented for short river energy conversions. An example of an inclines axis hydrokinetics turbine is the VLH (Very Low Head) turbine, which is an impeller-type turbine used in small heads and with large flow rates below 5 m. 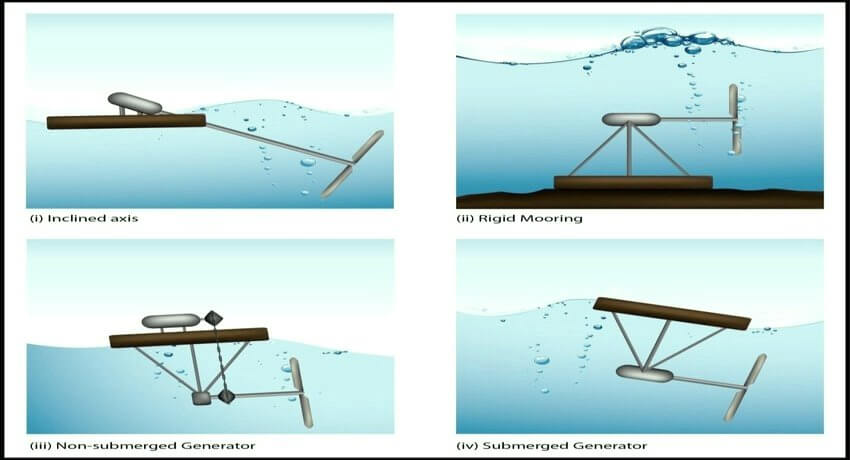 Cross-flow turbines have rotor axes orthogonal to the flow and parallel to the surface of the water. These turbines may also be called floating waterwheels. These are mainly drag-based machines and have less efficiency than their counterparts operating on the basis of lift.

Another problem is the large number of ingredients used in them. Maybe Darius turbines with cross-flow configurations fall into this class of turbines. 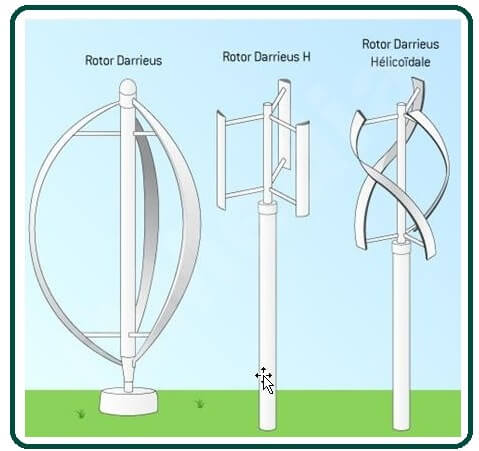 Although the use of H-Darius straight-blade turbines is common, there are no examples of Darius curved or parabolic blade turbines used in hydro applications.

There are some opportunities & challenges associated with various hydrokinetic turbines. Horizontal and vertical axis configurations are discussed in this section according to their technical advantages and disadvantages.

The simplicity of design & system cost is important items in the success of hydrokinetic turbines. Unlike the blade design of horizontal axis turbines, which involves careful machining and fabrication, the use of straight blades of verticals axis turbines makes the design much simpler & less expensive.

Water velocity variation in the vertical direction of a channel has a significant effect on turbine performance. In a shallow channel, the upper parts of the turbines encounter higher waters velocities. In these cases, verticals axis turbines, such as those with helical blad, are more efficient.

The axial turbine is often designed to be placed at the bottom of the channel, while vertical turbines are assumed to be installed in floating or near-surface arrangements.

Due to the physics and unstable nature of flow in vertical axis turbines, the risk of cavitation is higher than in horizontals axis turbines.

An essential advantage of horizontal axis turbines is the uniform hoisting force along the blade due to the blade design. Therefore, these turbines are self-starting. In addition, they operate optimally at high rotational speeds.

There are three phases of design, installation, & operation for every hydraulic turbine project. In the design phase, a careful assessment of flow characteristics, turbine features, dimensions, components, locations, and how turbines components are connected must be made.

During the installation phases, the location musts are carefully located. Necessary civic amendments should be made.

The turbines must be assembled & placed in the selected position, and necessary arrangements must be made to connect the turbines to the end user. During the operations phase, necessary maintenance, such as repair and cleaning, is performed.

Hydrokinetic turbines are designed for the purpose of generating electricity. The turbines are intended to be placed underwater, in a fixed, floating, anchored, or towed configuration, in any location where the effective water current preferably flows with a minimum speed of about 0.25m/s.

These turbines for rivers and canals allow for the introduction of a base load supply, providing a complete renewable energy solution for the best cost-benefit possible.