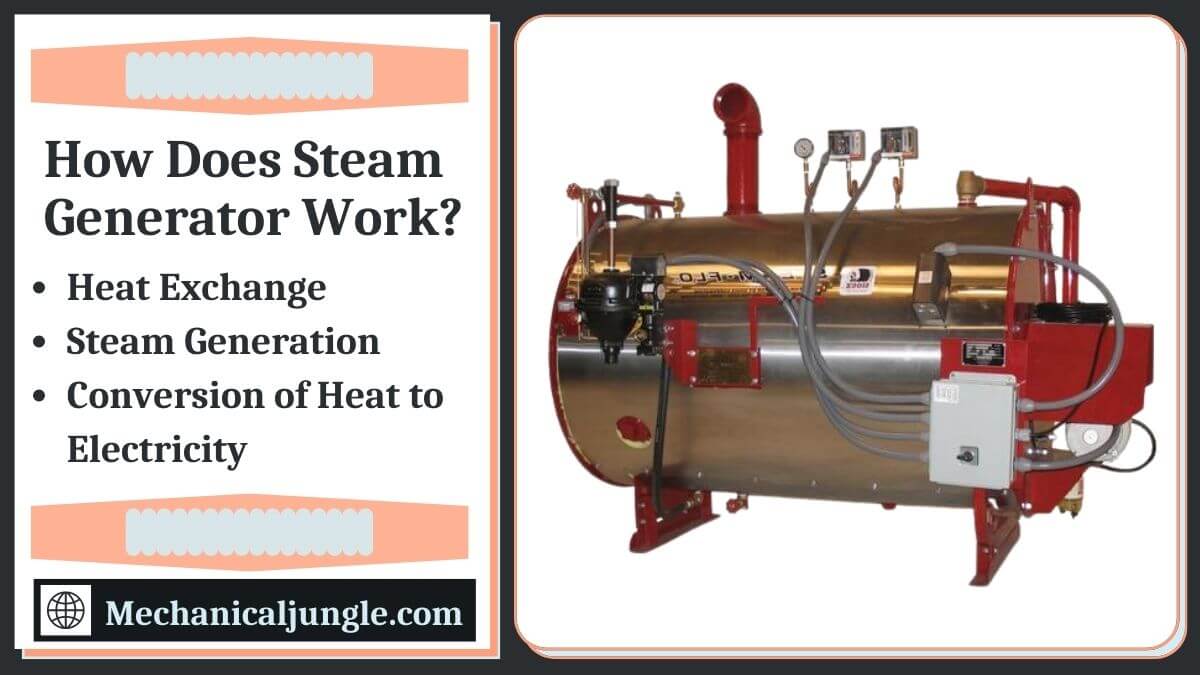 How Does Steam Generator Work?

Steam generators are used in a variety of processes to harness free energy in the form of heat and convert it into a form that is more useful, such as mechanical and electrical energy. The heat used is usually produced intentionally to produce electricity or is obtained as a byproduct of another industrial process.

The immediate source of heat is usually dirty, such as radioactive fuel in a nuclear power plant, so the first step in steam power generation is to transfer that heat to clean water with a heat exchanger.

This is done by raising the temperature of an exchange medium by a heat source, such as oil, which is circulated in a closed circuit. The oil, in turn, heats up without contaminating a reservoir.

The hot oil is circulated through the waters bath to generate steam. There are many different geometric schemes for doing this, but the principle remains the same.

The heating liquid is diverted into several small pipes to increase its surface contact with water and facilitate rapid heat exchange and steam generation.

The steam produced in modern nuclear and coal power plants is often in supercritical conditions or above the critical point in the water phase diagram (374 °C and 22 MPa).

#3. Conversion of Heat to Electricity

Supercritical steam is loaded with energy. Steam energy is converted into mechanical energy by force by means of a steam turbine. The high pressure of steam exerts pressure on the angled blades of the turbine, causing the shaft to rotate.

This mechanical energy is converted into electricity, using the power in the form of a rotating shaft to turn an electric generator. The turbine being built in the image can generate up to 65 MW of electricity.

What Is a Steam Generator? 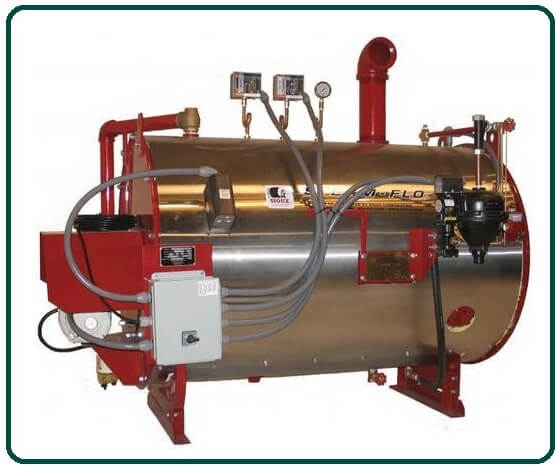 Compared to steam boilers, steams generators have less steel construction in their design, which uses a single tube coil instead of several smaller diameter boiler tubes. A special feedwater pump is used to continuously pump the feedwater through the coil.

A steam generator uses a bar-through, forced flow design to convert incoming water into steam during a single pass through a water coil. As water passes through the coil, heat is transferred from the hot gases, turning the water into steam.

Steam drums are not used in the generator design, where the boiler steam has a dissipation zone from the water, so achieving 99.5% steam quality requires the use of a steam/water separator. Since generators do not use a large pressurized vessel like a firetube, they are often smaller and start up quickly, making them ideal for quick on-demand situations.

However, this comes at the cost of producing energy, as generators have a lower turn-down rate and are therefore less able to provide steam during periods of variable demand.

What Is a Steam Boiler? 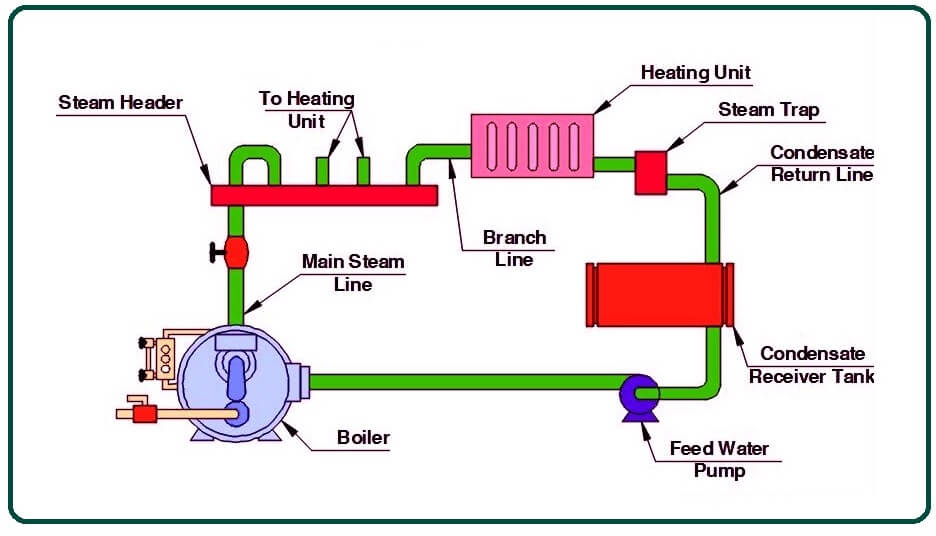 Steam boilers are typically large pressurized vessels capable of providing energy to industrial operations. They accomplish this by boiling water at sub-critical pressures with complex fuel systems. In some jurisdictions, a fully certified and licensed operator is required on-site to operate the high pressure and high steam generation capacity of steam boilers.

There are two common designs for steam boilers: firetube and water tube. In a firetube design, a steam boiler is a pressure vessel consisting of a large shell in which the hot gases of combustions pass through one or more boilers tubes attached to the boiler sheet back and forth.

The most common firetube types are Scotch marine firetube boilers, which use one large furnace tube and several smaller boiler tubes. The hot gases from the combustion process pass through tubes, transferring the heat to the surrounding water.

This process develops the high temperature needed to boil the water and start the steaming process. The water tube boiler actually reverses this design. Water flows through smaller diameter boiler tubes while combustion gases move around them to transfer heat to the water.

In the water-tube design, boiler tubes move hot water inside the tubes between the lower drum (soil drum) and the upper drum (steam drum), allowing the generated steam to accumulate in the upper drum. Heat is generated in the furnaces area & transferred to the waters through two main areas, the furnace area and the convection zone, while the hot gases are moving into the tubes and out of the exhaust.

Steams generator can be a source of low-pressure steam for a variety of commercial and industrial applications and can sometimes be used in place of conventional boilers. It is a device that uses heat sources to boil liquid waters & converts it into its vapor phase, called steam.

Heat can be obtained from the combustion of fuels such as coal, petroleum fuel oil, natural gas, municipal wastes or biomass, a nuclear fission reactor, & other sources. If you are looking for steam power solutions for your business, you may come across the confusing difference between a steam generator and a steam boiler.

The most basic understanding of these two systems is that they both produce energy through steam; however, they accomplish this in fundamentally different ways. These differences affect everything about each system, including its size, operation, and, most importantly, its application.

Since steam boilers and steam generators are to be used in completely different situations, it is essential for a business to understand the discrepancies between them. Understanding the design of these two systems will help you choose which one is right to meet your energy production needs.

How Does a Steam Generator Work?

Steam generators (SGs) are large shell and tube heat exchangers, containing several thousand tubes. They transfer heat from the primary reactor coolant to the secondary side to produce steam, which then powers turbine generators to produce electricity.

What Is a Steam Generator?

A steam generator is a form of a low water-content boiler, similar to a flash steam boiler. The usual construction is as a spiral coil of water tube, arranged as a single, or monotube, coil. Circulation is once-through and pumped under pressure, as a forced-circulation boiler.

Steam generators are ideal for on-demand situations. They are smaller and easier to start up compared to steam boilers and, thus, may be used as auxiliary boilers. Generators usually do not have the same maximum capacity as fuel-fired boilers, so they are best for applications that require point-of-use dry steam.

The use of steam boilers in HVAC systems includes water heating, sanitation, cooking, waste energy utilization, and central heating. Fire-tube boilers are used to warm the air which is transferred to the rooms of a house or warehouse.

Steam generators are heat exchangers used to convert water into steam from heat produced in a nuclear reactor core. They are used in pressurized water reactors (PWR) between the primary and secondary coolant loops.