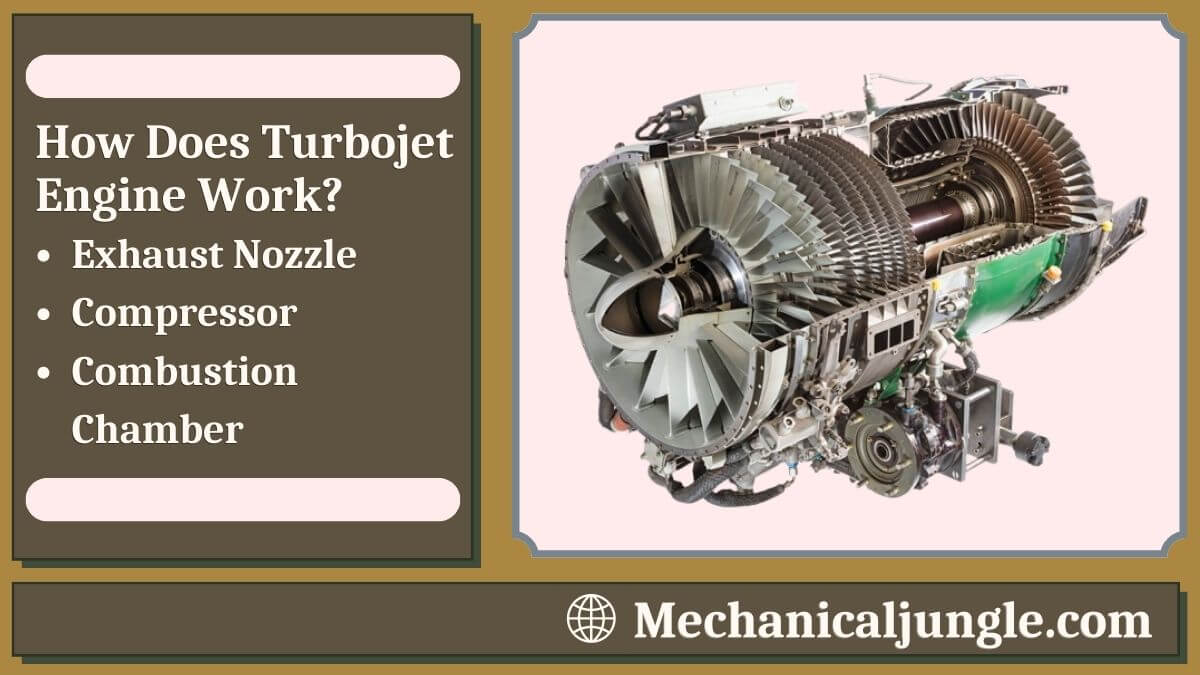 A turbojet engine is an engine that generates all of its force by discharging energy in a gas stream from the nozzle of the exhaust engine. The turbojet engine was developed or built by the aero scientists of Germany and Britain during the period of world war 2.

Turbojet engines are very important nowadays because they generate more thrust than the propeller engine. The temperature which can operate is high, which means it can operate at high temperatures.

How Does Turbojet Engine Work?

Here we are talking about what happens inside the Engine when air passes through the Engine. Air in large amounts inlet the Engine. In countries like England, they call it proper intake, but from when it gets pulled into the Engine by the compressor.

In the diagram, we show the inlet, which is tube-shaped. These inlets come in many different sizes. It depends on the mission of an aircraft. In the inlet rear, the air enters the compressor, and it acts like there are many airfoils. The compressor is similar to a fan, which means we need to supply electricity to the fan to turn it on, the same way we require energy to turn the compressor.

The jet is running slower than sound speed, and the Engine of that aircraft is running in the air at about 600km/h to 1000km/h. The fan at the front of the Engine pulls the air into the aircraft engine and moves it through the inlet. Because of this fan, the flow of air becomes slow by 50 to 60 percent, and the speed remains at 400km/h.

There is a chamber of combustion just behind the compressor; the furl(kerosene) gets mixed with compressed air and burns. And it gives hot exhaust gasses off, which increases the temperature.

This mixture of burning then reaches a temperature of 900 degrees Celsius. Then, the gas will rush towards the turbine blades and spin like a windmill as the gas will lose the same amount of energy gained by a turbine. And this will happen because of cooling down and losing pressure.

Through exhaust nozzles, hot exhaust gasses exit the Engine. As from the pipe, water gets pushed fastly into a fast jet. The exhaust nozzle, which has a design like tapering these designs, helps the gas to accelerate to a speed of 2100 km/h. The Engine which leaves hot air in the back has twice the speed of the cold air which is entering from the front of the Engine of an aircraft, and the aircraft gets the power to fly in the sky with such a heavyweight.

Army or military jets have afterburners that flow the fuel inside the jet exhaust to generate the extra thrust in the aircraft. The hot gasses moving backward of the engine power the plane to run or fly in the forward direction.

In-depth, you will see that each component of the aircraft engine works differently in the air or by passing fuel mixture.

The exhaust nozzle fastly increases the exhaust gasses velocity to power the plane to fly in the air.

Compressor fastly increases the air pressure as well as its temperature.

The combustion chamber fastly increases the air-fuel mixture temperature by losing the energy of heat from the fuel. 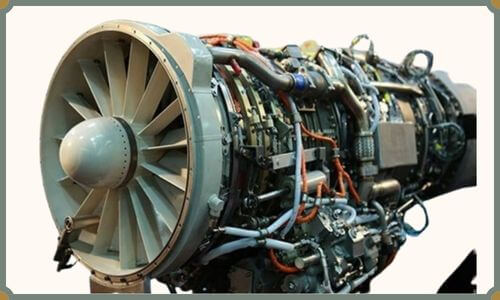 In simple language turbojets, the engine means the aircraft engine which uses oxygen from the atmosphere to burn the fuel and generate the thrust.

Air is drained into the turbojet engine by inlet and compressed, and the compressor heats them. After that, fuel is filled in the chamber of combustion and then ignited. The burned fuel adds energy to the exhaust stream by expanding air and heating.

As nozzles pass the exhaust gas, it accelerates at high speed as propulsion expands. The thrust the turbojet engine produces will increase selectively by re-heating into the Engine’s design.

If you know the principle of the small relative mass of air to high speed, you will easily catch up with the concept of working the turbojet engine.

If the accelerated air speed exceeds the plane speed, it achieves optimum efficiency. To match the speed, the Engine is more efficient and quiet due to the lower speed and greater mass of stream exhaust as it leaves the Engine.

Some Facts About the (Jet Engine)

Maxine Guillaume, in the 1900s, filed the first patent for the jet engine. Guillaume suggested an axial-flow turbojet engine in his patent to use in the aircraft. Maxine Guillaume never built the engine jet, but the patent he has offers the framework for other types of jet engines.

On the other hand, aircraft need stronger engines to lift the plane’s weight in the air. As the weight of a vehicle increases, it requires a more powerful engine.

While other aircraft use gas turbine engines, these engines of gas turbines are a type of rotary Engine that generate thrust. The engines which are commonly used in aircraft are turbojet engines. These engines are designed to compress the air as they are mixed with fuel to produce combustion.

Engines of the turbojet burn the mixture of compressed air and fuel to produce force and thrust to fly the aircraft between air. All the aircraft engines which use jet engines in their aircraft are a thrust-to-weight Ratio.

When it comes to the cost of small jet engines depends on the variant and model; small aircraft engines can cost between $50,000 to $80,000, which is not much more expensive than that of other large aircraft.

There are various advantages of turbojet engine which are as follows.

There are also some of the disadvantages of turbojet engines which are as follows.

Why Are Turbojet Engines Essential?

An engine like a turbojet is a closed cycle of a turbine engine used in the aircraft. The Engine burns the fuel and uses components like a propeller, turbine, compressor, etc.

A turbojet engine is a jet engine that produces all of its thrust by ejecting a high-energy gas stream from the engine exhaust nozzle. In contrast to a turbofan or bypass engine, 100% of the air entering the intake of a turbojet engine goes through the engine core.

How Does a Turbojet Work?

In a reaction engine, expanding gases push hard against the front of the engine. The turbojet sucks in the air and compresses or squeezes it. The gases flow through the turbine and make it a spin. These gases bounce back and shoot out of the rear of the exhaust, pushing the plane forward.

How Does Turbojet Engine Work?