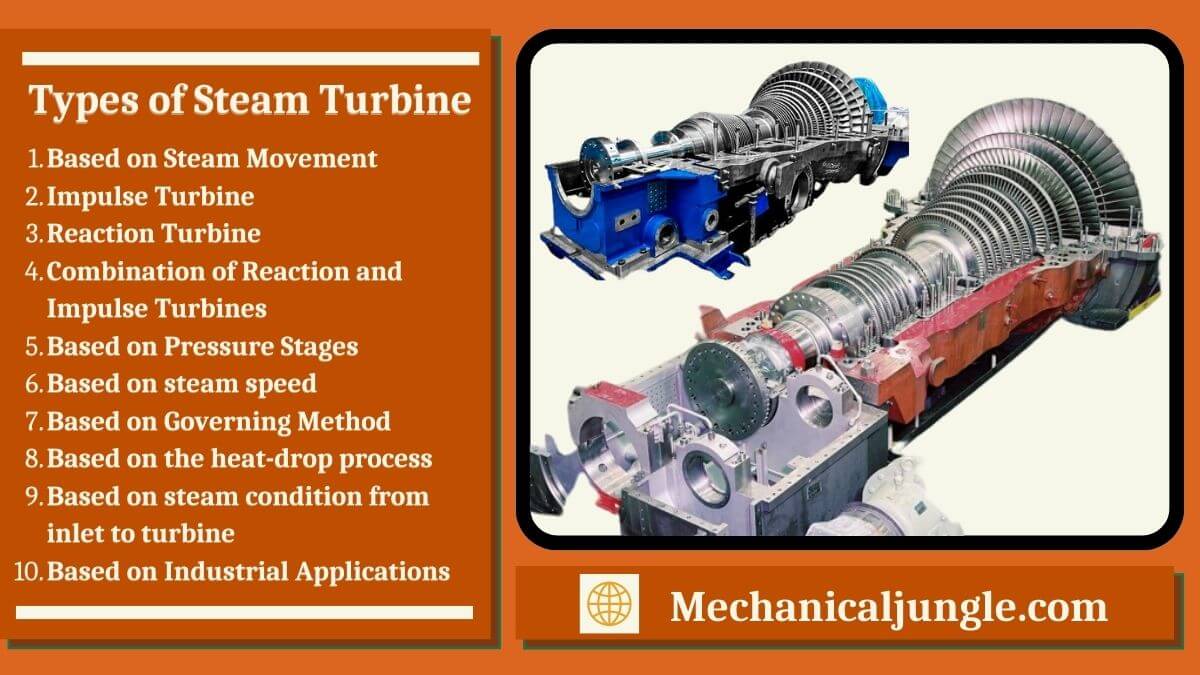 How Does a Steam Turbine Work? 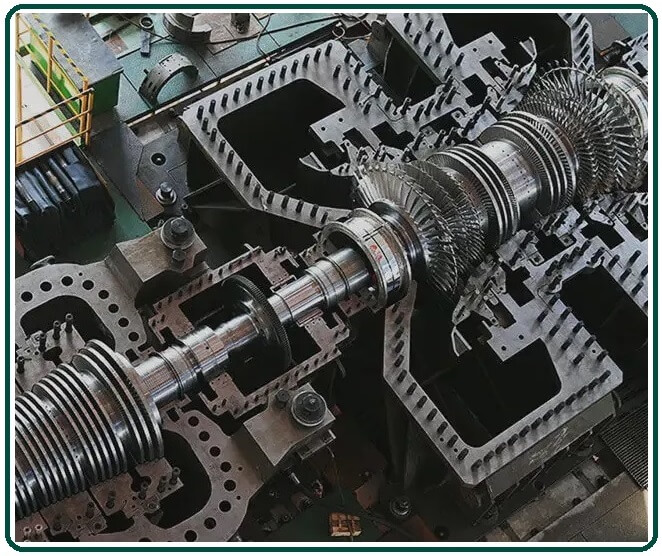 Most electricity across the united states is produced with the help of steams turbines engines; according to the U.S. Department of energies, more than 88 percent of energy in the U.S. Is produced through the central power plant, such as solar thermal, through steam turbine generators, electricity, coal, and nuclear power plants.

Offering high efficiency and low cost, steam turbines have become an integral part of many us power generation industries. In simple words, a steam turbine works by using a heat source gas, coal, nuclear, solars to heat waters to extremely high temperatures until it is converted into steam.

As that steam flows through the spinning blades of the turbine, the steam expands and cools. The potential energy of steam is thus converted into kinetic energy in the blades of a rotating turbine. Since steam turbines generate rotary motion, they are particularly suitable for driving electric generators to produce electrical energy.

Turbines are connected to generators with an axle, which in turn generates energy through a magnetic field that generates an electric current. In the previous sections, we gave you examples of steams engine, which shows you the role of steams in steams engine.

As that steam flows through the spinning blades of the turbine, the steam expands & cools. The potentials energy of steams is thus converted into kinetic energy in the blades of the rotating turbine. Since steam turbines generate rotary motion, they are particularly suitable for driving electric generators to produce electrical energy.

Turbines are connected to a generator with a spindle, which in turn generates energy through a magnetic field that generates an electric current.

What Is a Steam Turbine?

As its name suggests, steams turbines are powered by the energy in hot, gaseous steam and act like a cross between a wind turbine and water turbines. It resembles winds turbines because it has rotating blades that turn when steam is driven; And it’s like a water turbine because the blades fit snugly inside a sealed outer container, so the steam is constrained and forced to move at speed.

Steam turbines use high-pressure steam to turn power generators at incredibly high speeds, so they spin much faster than wind or water turbines. A steams turbines is actually a form of heat engine that improves thermodynamic efficiency by the use of multiples stages in the expansion of steam, resulting in a near-ideal reversible expansion process.

The first modern steam turbine was Sir Charles A., Developed by Parsons in 1884. This turbine was used to light an exhibition in Newcastle, England, and produced only 7.5 kWh of energy. Now, steam turbine generators can produce more than 1,000 megawatts of energy in large-scale power plants. While production capacity has increased enormously since Parsons, the design has remained the same.

But, as intuitive as Parsons’ design is, it’s not as smooth as steam moving across the blade. It was based on the second’s law of thermodynamics & Carnot’s theorem, which claims that with higher steam temperature comes greater power plant efficiency. Let’s find out how steam helps power most of the country’s power generation plants.

How Is So Much Energy Capture from Steam?

Going back to high schools physics, waters boil at 100°C. At that point, the molecules expand, & we get vaporized waters—steam. By harnessing the energy contained in rapidly expanding molecules, steam provides remarkable efficiency for energy production.

Given the high temperature and steam pressure, it is no surprise that there have been cases where accidents have occurred due to poor use or implementation of safety valves. One of the mosts notables incidents occurred at the Three Mile Island Nuclear Powers Plant.

The incident came down to a buildup in steam pressure when the pumps that fed water to the steam generator stopped working.

By now, we know that a steam turbine actually works with steam pressure. To know what process a steam turbine goes through to make it work, it is best to first look at the composition of the steam as the most important part of the steam turbine. The operating principle of these types of equipment is based on the dynamic motion of steam.

The increased pressure steam from the nozzle strikes the rotating blades that fit snugly to the disc mounted on the shaft. Because of this increased velocities in the steam, it develops energetic pressures on the blades of the device, where then the shaft and blades begin to rotate in a uniform direction.

In general, steam turbines dissipate the energy of the stem and then convert it into kinetic energy, which then flows through the tube. So, the change of kinetic energy makes mechanical action in the rotor blades, and this rotor has a connection with the steams turbines generator & acts as an intermediary.

Because the construction of devices is so streamlined, it generates the least amount of noise compared to other types of rotating equipment. In most turbines, the speed of the rotating blades is linear to the speed of the stream flowing through the blades.

When the steam expands from that boiler force to the exhausting force in a single-stage phase, the vapor velocity is greatly increased. Whereas the major turbines which are used in nuclear plants, where the steam expansion rate is about 6 MPa to 0.0008 MPa, with a speed of 3000 revolutions per 50 Hz frequency & 1800 revolutions at 60 Hz frequency.

How Does Steam Provide Energy in Steams Machines?

If you’ve ever seen old-fashioned steam locomotives, you’ll have an idea of ​​how powerful steam can be. A steam engine is built around a steam engine, a complex machine based on a simple idea: You can burn fuels such as coal to release the energy stored inside it.

In a steam engine, coal burns and releases heat in a furnace, which boils water like a kettle and generates high-pressure steam. Steam is fed through a pipe into a cylinder with a tight and fitting piston, which travels outward as streamflow.

As steam expands to fill the cylinder, it cools, the pressure decreases and releases its energy to the piston. Before returning back to the cylinder, the piston pushes the locomotive’s wheels around so that the whole process can be repeated.

Steam is not a source of energy: it is an energy-transporting fluid that helps convert the energy locked inside the coal into mechanical energy that propels a train.

How Do the Turbine’s Blades Work?

Perhaps second to steam is the turbine blades. For this reason, it is better to be familiar with their operation, which makes up most of the work of steam turbines. The blades of the turbines are designed to control the speed, direction, and pressure of steams as it passes through the turbines.

For a large-scale turbine, there are dozens of blades attached to the rotors, usually in different sets. Each set of blad help to extract energy from the steams while keeping the pressure at an optimum level.

This multi-stage approach means that the blades of the turbine are reducing the steam pressure by making a very small increase during each stage. This, in turn, reduces the force on them & greatly improves the overall output of the turbine. 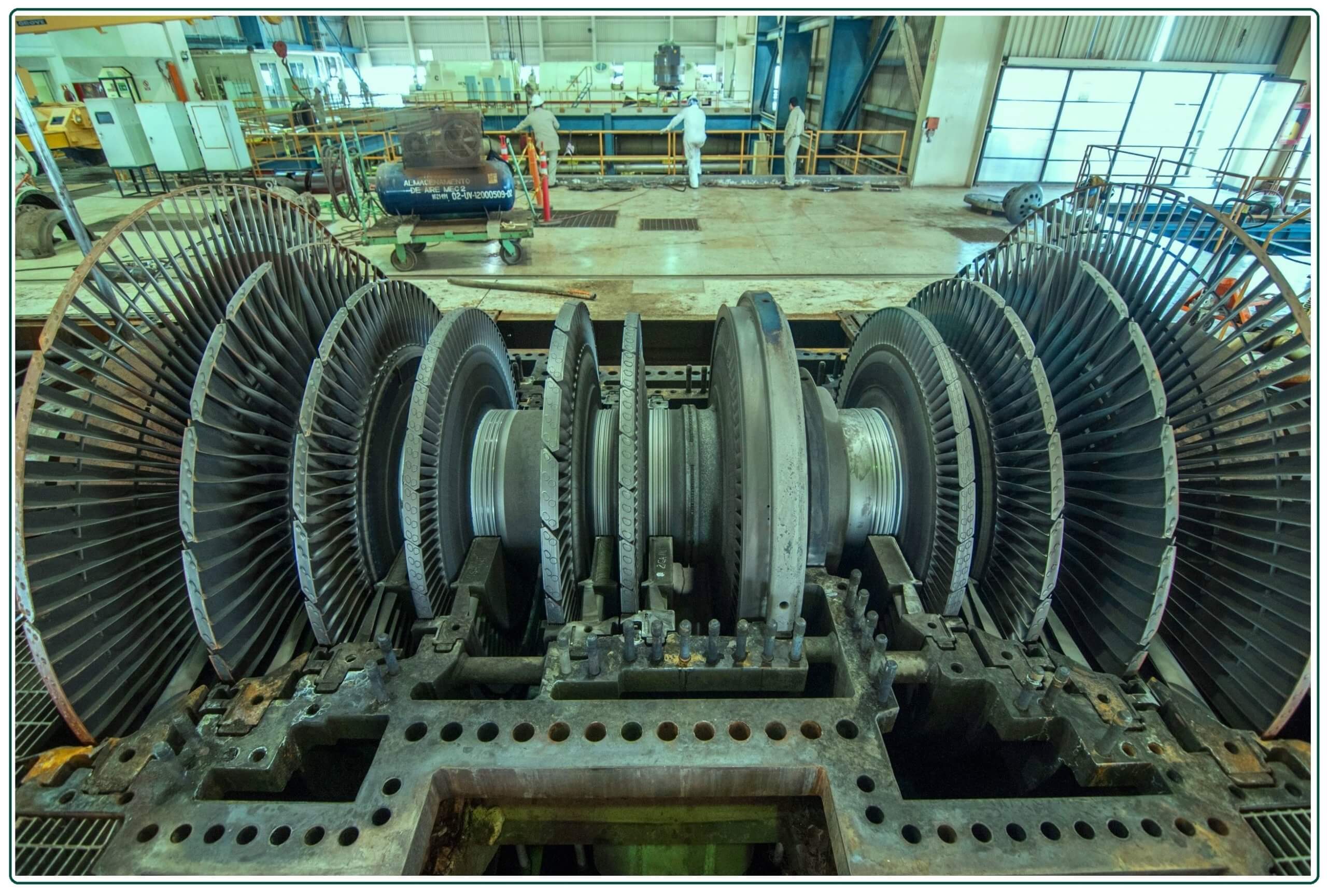 Steam turbines are classified on the basis of several parameters, and there are several types. Types to be discussed are as follows:

#1. Based on Steam Movement

On the basis of steam speed, these are classified into different types, which include the following.

Here, the high-speed steam that comes out of the nozzle collides with the rotating blades, which are placed on the circumferential rotor section. As with striking, the blades change their rotation direction with no change in pressure values. The pressure generated due to momentum develops the rotation of the shaft. Examples of this type are Reto and Curtis turbines.

Here, the steam will expand in both the moving and stationary blades when the current flows over them. There will be a constant pressure drop on these blades.

#4. Combination of Reaction and Impulse Turbines

Based on the combinations of reaction & impulse turbines, these are classified into different types, which include the following.

#5. Based on Pressure Stages

On the basis of pressure phases, these are classified into different types. single stage These are applied to power centrifugal compressors, blower equipment, and other similar types of equipment. Multi-stage Feedback and Impulse Turbines These are employed in an extreme range of capacities, either in minimum or maximum ranges.

#6. Based on steam speed

These are classified into different types on the basis of steam speed.

In these devices, the steam will flow in a direction that is parallel to the rotor axis.

In these devices, steam will flow in a direction that is perpendicular to the rotor axis. Either one or two low-pressure stages are created in the axial direction.

#7. Based on Governing Method

On the basis of the system of governance, they are classified into different types.

Here, fresh steam comes in through one or more concurrently functioning throttle valves and is based on power development.

Here, fresh steam comes in through one or more sequentially opening regulators.

Here, steam drives both the first and second intermediate stages of the turbine.

#8. Based on the heat-drop process

Based on the heat drop process, these are classified into different types.

In this, the vapor force, which is less than the environmental pressure, is fed to the condenser.

In this, steam is separated from the intermediate phases for commercial heating purposes.

Here, the finished steam is used for both heating and industrial applications.

Here, the finished steam is used for low and medium force turbine condensation.

#9. Based on steam condition from inlet to turbine

#10. Based on Industrial Applications

The advantages of steam turbines are

The disadvantages of steam turbines are

How Do Steam Turbines Work?

As the name implies, a steam turbine is powered by steam. As a hot, gaseous stream flows past the turbine’ spinning blades, the steam expands and cools, giving off most of the energy it contains. This steam spins the blades continuously. The blades thus convert most of the steam’s potential energy into kinetic energy.

What Is a Steam Turbine?

A steam turbine is a machine that extracts thermal energy from pressurized steam and uses it to do mechanical work on a rotating output shaft, possibly using a renewable energy heat source.

What Is Back Pressure Turbine?

The back pressure turbine is used for supplying process steam to the facilities in private-use power producers. This type of steam turbine supplies not only electricity but also steam to various process requirements.

In simple terms, a steam turbine works by using a heat source (gas, coal, nuclear, solar) to heat water to extremely high temperatures until it is converted into steam. As that stream flows past a turbine’s spinning blades, the steam expands and cools.

In order to match steam production to heat demand, there are three types of steam turbines in common use for CHP plants. These three are called a back pressure steam turbine, an extraction steam turbine, and a condensing steam turbine. Each type will suit a different configuration of the plant.

There are 3 main types of impulse turbines in use: the Pelton, the Turgo, and the Crossflow turbine. The two main types of reaction turbine are the propeller turbine (with Kaplan variant) and the Francis turbine. The reverse Archimedes Screw and the overshot waterwheel are both gravity turbines.