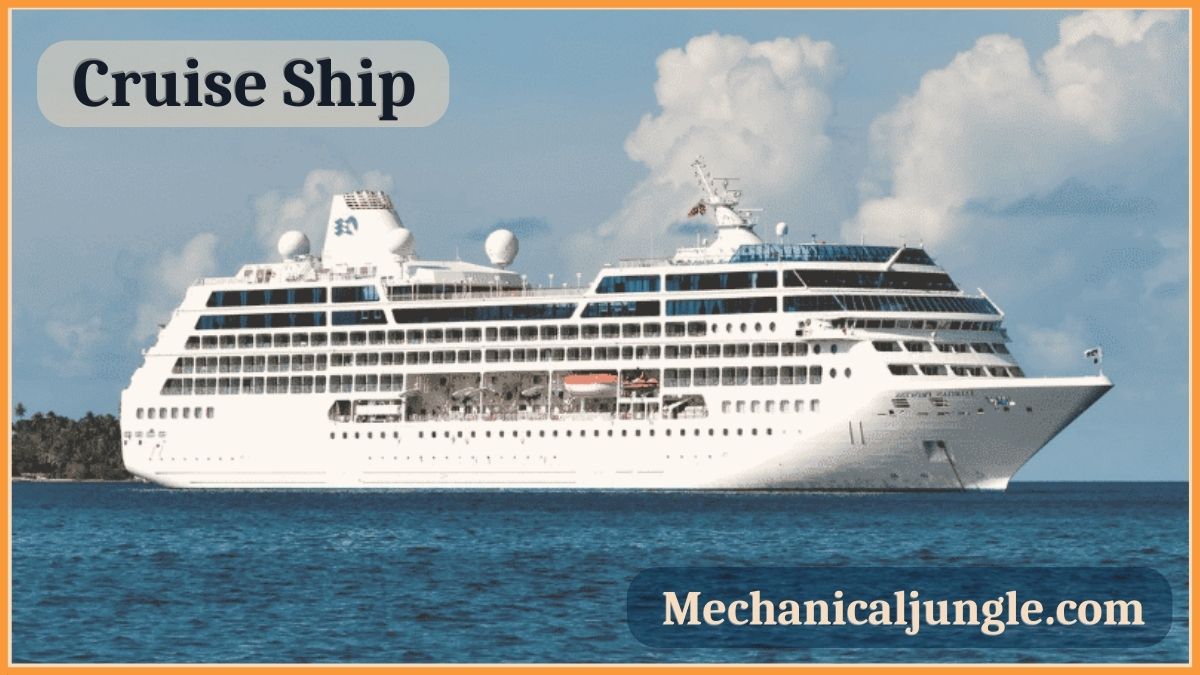 What Is a Cruise Ship?

The other ships are used to transport the passengers or goods from one port to another, but the cruise ship is used to take the passengers on a short trip which is for a limited duration. This mode of traveling is very refreshing and full of enjoyment that relaxes the mind.

But nowadays, modern cruise ships have less hull strength, agility, and speed than ocean liners. At the end of December 2018, there were globally 314 cruise ships operating with a combined capacity of 535,000 passengers.

In the tourism industry, cruising is the major part, with an estimated market of $28.9 billion annually and over 19 million passengers carried through worldwide annually.

From the present day of the cruise to the back at the beginning of the twenties, transoceanic traveling was at its high point. In the past, the only means of transportation was boat transport.

There is a need for huge storage for the fuel and the other various types of necessities and which didn’t leave room for luxuries. In the last century, jet airplanes were invented and started to provide service.

The passengers shift their traveling mode from sea mode to airplane mode. The real sea fans or the passengers who wanted to experience the sea only started to travel by sea.

The situation was perfect to launch the cruise ship in front of the public. But it needed something different and exciting to bring the passenger’s interest to sea voyages, and from this time, the trips got popular.

The journey is very short and has many stops at exotic locations, so for that reason, the ships are designed accordingly by making room and utilizing the open design space. They make the cruise ship a floating hotel completely with hospitality.

The cruise ships offer the facilities of dining, but while some of the linear offer the halls of open dining to customers on the deck, Also, some other expensively designed halls with the facility of mouth-watering recipes leave a long-lasting impression on the passengers and help to popularize this mode of traveling.

And in addition, some cruise ships offer passengers casinos, spas, cinemas, and gyms, and some of the ships also have Broadway-like theaters. On these cruise ships, you also have to see the boats, swimming pools, lounges, hot tubes, clubs, and libraries.

Over the last ten years, cruising has become a main part of the tourism industry, contributing over $25 billion annually to these cruising sectors. As expected, the main income of these businesses comes from the European countries and some from North America, while some other areas like pan pacific also reach. 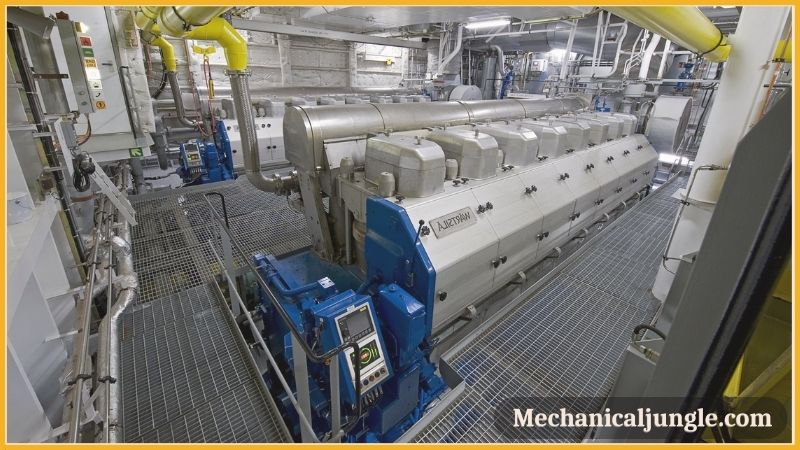 The most basic detail which is required to understand in detail about the engine room is the location of the engine room. As ships need their heaviest weight as low as possible for stability, the engines are located just above the knee. Because of these reasons, the lower decks of ships are almost filled with all the machines of the cruise ships.

The area in the ship which created the power to drive a skyscraper-sized vessel through the water, the engines room are commonly at least 3 to 4 decks high. The engine rooms are not too large as space is premium on cruise ships.

The engines are divided into undersized waterproofed parts in an extended successive hall that passes over the hull. One of the areas contains the main engine, which gives the power to run the ship, and the air conditioner system is installed in the other compartment. This section is for security purposes only.

In some accident situations, such as a fire or hull attack, multiple compartments on cruise ships support to contain the damage. On some ships where the engines are (exceptionally) appointed somewhere other than the underneath of the cruise ship, e.g., B. Queen Mary has four main diesel engines on the keel of these ships.

From now on, some decades ago, it was uncommon for older linear to have only two engine rooms in the ship. Technology slowly allows the engine spaces to combine. The legislation now requires ships to have an equipment duplication space for two engine rooms.

Also, Read: Gearbox Introduction | What Is a Gearbox? | Types of Gearboxes 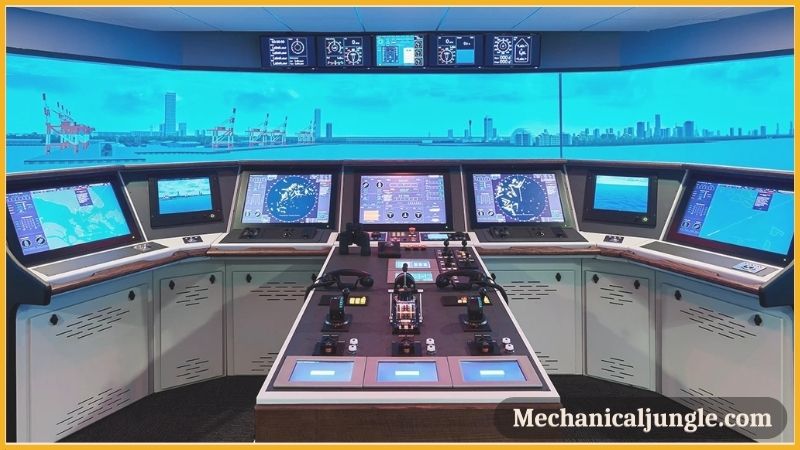 The bridge on the ship is where the ship captain and its crew member control the ship and manage the cruise ship’s direction and speed. From the narrow nautical origin, the raised platform “bridged” the two sides of the large vessel, allowing the captain to access both sides while commanding the crew.

Nowadays, modern ships have a glass-enclosed bridge on the upper deck near the front of the ship. Because of it, the captain and the crew get a clear view of the forward direction. Surrounded and open air, wing-like extensions are perched out from both sides, extending the crew’s ability to see the ship’s rear side and then down to see the water through the windows.

On the bridge, the ship crew has the nautical charts and the computer equipment that controls and reports on the ship’s electronic, mechanical, and communication systems. But sometimes, the steering capability is duplicated at several places, both mechanically and electronically, and it is included with the wing extension where the ship’s captain controls the vessel while docking.

Propulsion of the Cruise Ship

Without any power source, the cruise ship is just a floating hotel. In the older ship, diesel engines generate the power to run the cruise ship. The strength rendered by the engine is stored through a gearbox to the propeller shaft. Nowadays, modern ships use either their diesel-electric engines or gas turbines to power their engines and run them and also for the different systems of the ships.

As the ship size increases, the demand for electrical power increases. Some large ships depend on two types of power source that gives power to the engine, one for propulsion and the other for electric power. A gas turbine, a wind turbine, generates heat that is transformed from mechanical energy to electrical energy.

The engine capsulizes the combustion air in the explosion compartment. Hot exhaust is forced toward the turbine, which spins to drive a shaft mechanically. The power which is generated is then used to spin the generators. Diesel-electric motors use an unassuming enterprise method instead of a turbine, and this is how they work.

The output shafts are connected with electrical generators, which produce electrical power. Both types of engines need fuel. And other lots of it. For illustration, if the QE2 is moving at 28.5 knots, this will use approximately 380 tons of fuel per day.

The cruise ships fill up the fuel at various ports, like floating gas stations. Cruise ships use low-grade diesel and tend not to burn it as clearly as road-running diesel-powered vehicles. All the ships in the world depend on the propellers which push them through the water, commonly known as the screws, which cut through the water and give the reverse and the forward motion.

It is unlike airplane propellers, as they required tremendous high speed to give the forward motion required for the airplanes, while cruise ship propellers didn’t need to turn fast. Cruise ships only depend on torque, RPM, brute power, or high speed. That’s why the cruise ship travels or runs slowly.

The minimum speed is 30knots. The new cutting-edge cruise ships, for example, QM2, use azimuth thrusters, which are pods that house propellers capable of rotating 360 degrees and offer optimum maneuverability. The rudders are replaced by the thrusters, which also have some benefits over conventional screw-type propeller systems; the stopping distance decreases and great fuel efficiency. These cruise ships will either use diesel-electric engines or gas turbines.

Which Type of Engines Are Used in Large Ships Like Cruise Ships?

Where Is the Engine Located in Ships?

The engines are located on the lower deck towards the aft in modern new cruise ships. These engines are not discovered downright in the row of the ship but in the middle of the ship. Engines of the independent cruise ship size have extremely loud sounds.

Engineers repay for the noise by incorporating sound reduction technology(ISRT); they keep the engine room well insulated. Insulated rooms have two different benefits. Because the room is insulated, it keeps the noise only inside of it and reduces the heat generated by the ship’s engines.

This correspondingly prevents warmness from fleeing to the bordering deck. To give you a conception of ​​how loud the engine sounds, this has a range of over 173 decibels. This is so loud that this is in the pastureland, where hearing problems occur quickly. But because of the propeller insulate method, the sound does not come so loud.

How Much Power Is Needed for Ships Like Cruises?

Ships like cruises consume power which is about a horsepower of 50,000. On this type of ship, one horsepower is equal to 746watts. Engines of large ships are designed in such a way that they can move the large propellers and can produce enough diverted electricity to run the propellers.  Since cruise ships can travel more than 34.5 miles per hour, most ships exclusively travel at 23 miles per hour, which is 20 knots.

Why Are So Many Engines Installed in the Ships? Is It Possible to Experience Engine Failure?

Because of the high specification standards and regular maintenance, it rarely happens in the case of a cruise ship experiencing engine failure.

What Are the Reasons for the Engine Failing?

Engine failure occurs in the ships when the main engine, which is responsible for running the ship, fails to run. It is because of not proper maintenance, some mechanical issues, and human errors; these all will be factors that cause the engine to fail.

How Much Fuel Does the Cruise Ship Consume?

Daily the cruise ship used about 140-150 tonnes of fuel or 35 to 55 gallons per mile. Traveling or running at high speed increases the drag, resulting in more fuel. Generally, the speed of the cruise ship on which it travels is nearly 22-25 knots to maintain the most efficient speed.

But on average, the cruise ship, which is large in size like cruise ship uses nearly 250 tons of fuel per day, which is nearly about 80,000 gallons.

Modern cruise ships use either gas turbine or diesel-electric engines as their power source for propulsion, as well as for the ship’s systems. The larger the cruise ship, the greater the demand for electrical power.

Cruise ships require a lot of power. And rightfully so! As they carry close to 3000 passengers with 500-1000 crew members at any time.

On a daily basis, the average cruise ship uses around 140-150 tonnes of fuel or 30 to 50 gallons per mile. Like vehicle travel, hitting higher speeds increases drag which results in more fuel usage. Generally speaking, the majority of cruise ships find 21-24 knots to be the most efficient speed.

What Is a Cruise Ship?

Cruise ships are large passenger ships used mainly for vacationing. Unlike ocean liners, which are used for transport, cruise ships typically embark on round-trip voyages to various ports of call, where passengers may go on tours known as “shore excursions.”

What Is the Largest Cruise Ship?

Cruise ships were operating worldwide, with a combined capacity of 537,000 passengers. Cruising has become a major part of the tourism industry, with an estimated market of $29.4 billion per year and over 19 million passengers carried worldwide annually.