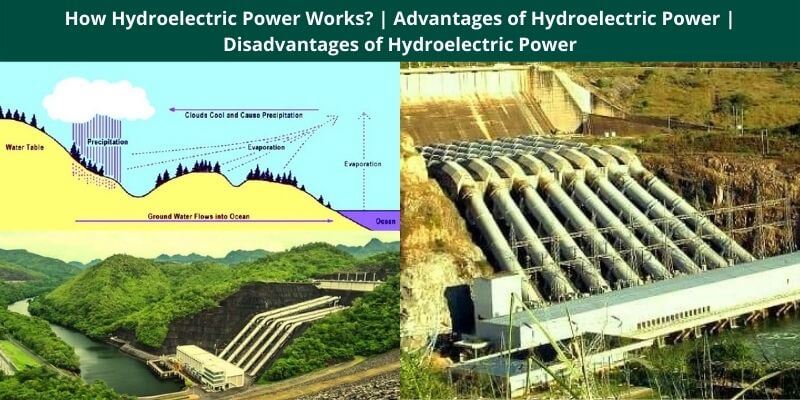 Some of these waters evaporate, but much of it either percolates into the soil or becomes surface runoff. Water from rain & melting snow eventually reaches ponds, lakes, reservoirs, or oceans where evaporation is taking place continuously. Moisture seeping into the soil can become groundwater (subsurface water), some of which also enters water bodies through springs or underground streams.

During dry periods groundwater can move upward through the soil and return to the atmosphere by evaporation. Water vapor evaporates into the atmosphere, then circulates, condenses into clouds, and some return to Earth as precipitation. Thus, the water cycle is complete. Nature ensures that waters are a renewable resource.

Hydropower has many advantages and can be considered a promising technology in the transition process from fossil to renewable energy. Let’s take a looks at the benefits of harnessing the incredible power of running water.

Hydroelectricity uses the energies of running water to generate electricity without reducing its volume. It will still be a sustainable powers source if infrastructures surrounding such power are sophisticated enough to meet challenges related to global warming.

Hydroelectric enterprises that develop and operate in an economically viable, environmentally sensible, and socially responsible manner represent the best concept of sustainable development. It supplies highway construction, attracts various industries, and promotes commerce as a whole.

Unlike electricity generation with fossil fuels, the production of hydropower does not require mining or shipping the fuel over very long distances. There is no mining involved in hydropower generation, and the water will be converted into energy where the power plant was installed.

Despite the expensive upfront construction cost, hydroelectricity is a cost-competitive source of energy. River water is a domestic resource that, unlike fuel or natural gas, is not subject to market fluctuations. In addition, it is the only major renewable source of electricity, and its cost-benefit ratio, efficiency, flexibility, and reliability help optimize the use of thermal power plants.

#7. Contribute to the Development of Remotes Communities

Hydroelectric power plants supply electricity to remotes communities, attracting the construction of highways, industry, & commerce. All these activities serve to uplift the economies of these remote areas, increase access to education & healthcare, and enhance the overall quality of life of the residents.

The lake formed behind the dam can be used for recreational opportunities, offering activities such as fishing, boating, and swimming. The water of the lake can also be used for irrigation. Apart from this, big dams have become the center of tourist attractions. It can boost the nearby cities economically.

Areas that were previously covered by water may dry up, and those that have dried up may be covered by water. In turn, these changes in natural living conditions can confuse many animal and plant species, leading to a reduction in those species and imbalances in local ecosystems.

Hydroelectric power plants & dams can be incredibly expensive to build. In addition, projects take a longer time to complete, and recovery of the money spent on construction would also require long hours. For example, compared to the falling prices of solar installations, hydropower is a more challenging renewable project to finance.

Although water is a limitless resource, the conditions required to build a dam are limited. The efficient production of hydroelectricity requires large rivers or streams to provide enough water. With the right amount of water and fairly close to existing power lines, it is challenging to find a suitable location that has a year-round water supply.

Rivers often represent the borders between the two countries. When it comes to making decisions regarding the construction of hydroelectric plants, both countries have to agree that the construction is in line with the goals of both countries. If one country wants to build a hydroelectric power plant and another country does not, there can be serious conflicts between those countries which may even result in wars in the worst case.

#6. Relocation Due to Risk of Floods

Local populations living downstream may be vulnerable to flooding due to potentially strong water currents flowing from dams. As a result, peoples have to relocate to the dam construction facilities needed to generate hydroelectricity. The World Dam Commission estimated in 2000 that dams physically displaced 40–80 million people worldwide.

The final disadvantage of hydroelectric power on our list is water quality. When dams are built, they limit the flow of water, which affects the oxygen level in the water.

Low oxygen levels behind the dam can also reduce oxygen levels downstream. When there are not as many oxygens in the waters, it is more difficult for some species of fish to survive, which affects the habitat of the river.