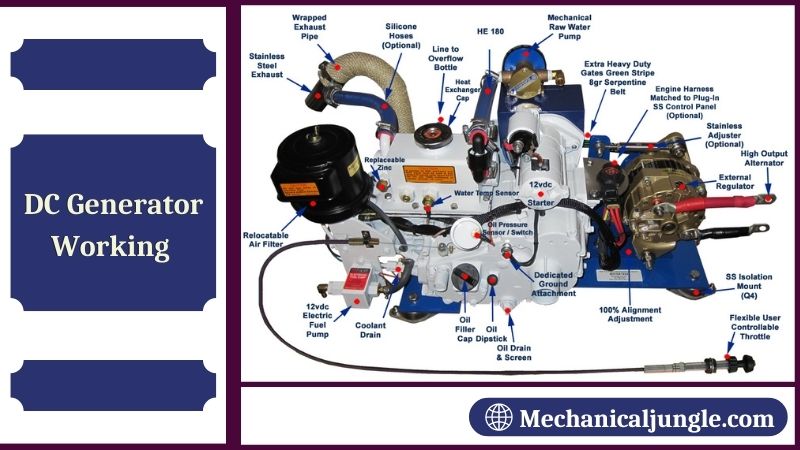 What Is a DC Generator? 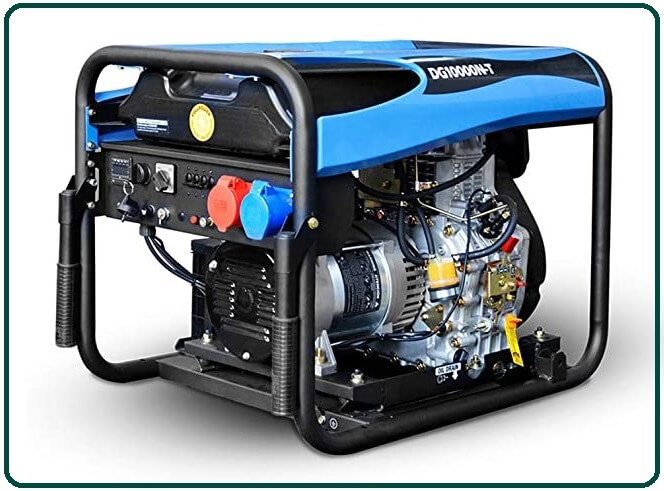 As mentioned earlier, they are two types of generators based on the output: AC and DC generators. The main function of a direct current generator is to convert mechanical energy into electricity. There are many sources that provide mechanical energy for DC generators, such as internal combustion engines, water, gas and steam turbines, & even hand cranks.

There is a reverse function defined for a DC generator: this reverse job can be accomplished using an electric motor. DC motor converts electricals powers into mechanical energy. DC generators produce electrical powers base on the principle of Faraday’s law of electromagnetic induction.

Based on this law, when a conductor moves in a magnetic field, the magnetic lines of forces are cut. This leads to electromagnetics forces induction in the conductor. “What is the working principle of DC generators?” To get a clear answer to the questions, let us also give a brief overview of its parts and components. In the following section, we will briefly walk you through the main parts of a DC generator and how they work.

Construction of a DC Generator:

In the previous section, we explain what a DC generator is in a nutshell. Now we want you to get more acquainted with its construction. A DC generator consists of several components that help the whole machine to function as it should. More than ten parts for DC generators are mentioned in various articles.

Here are the schematics diagrams of DC generators. 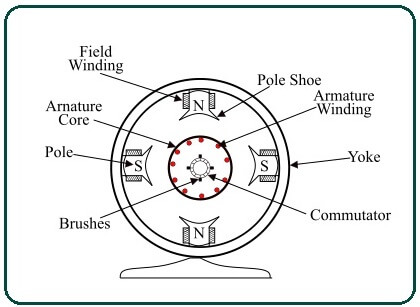 DC generators consist of six main parts, which are as follows:

The outer frames of DC generators are hollow cylinders made of cast steel or rolled steel, known as a yoke. The yoke serves the following two purposes.

The magnetic field system of the DC generator is the stationary part of the machine. This produces the main magnetic flux in the generator. It consists of an equal number of pole cores bolted to the yoke and field winding wound around the pole core.

The field system of the DC generator consists of main poles, i.e., the poles project inward, and each pole core has a curved surface pole shoe. The pole shoe serves two purposes.

Poles cores are made of thin laminations of sheets of steel that are insulated from each other to reduce eddy current losses. Fields coils are connected in series with each other such that when current flows through the coil, alternating north and south poles are produced in the direction of rotation.

The armature core of the DC generator is mounted on the shaft and rotates between the field poles. It has slots on its outers surface, & armatures conductors are placed in these slots.

A commutator is a mechanical rectifier that converts the alternating emf generated in the armature winding into a direct voltage across the load terminals. The commutator is made up of wedge-shaped copper sections that are insulated from each other and from the shaft by sheets of mica. Each section of the commutator is connected to the ends of the armature coil.

The brushes are mounted on the commutator & are used to collect current from the armature winding. The brushes are made of carbon and are supported by a metal box called brush holders.

The pressures exerted by the brushes on the commutators are adjusted and maintained at a constant value by means of springs. Current flows from the armature winding through the commutator and carbon brush to the external circuit. 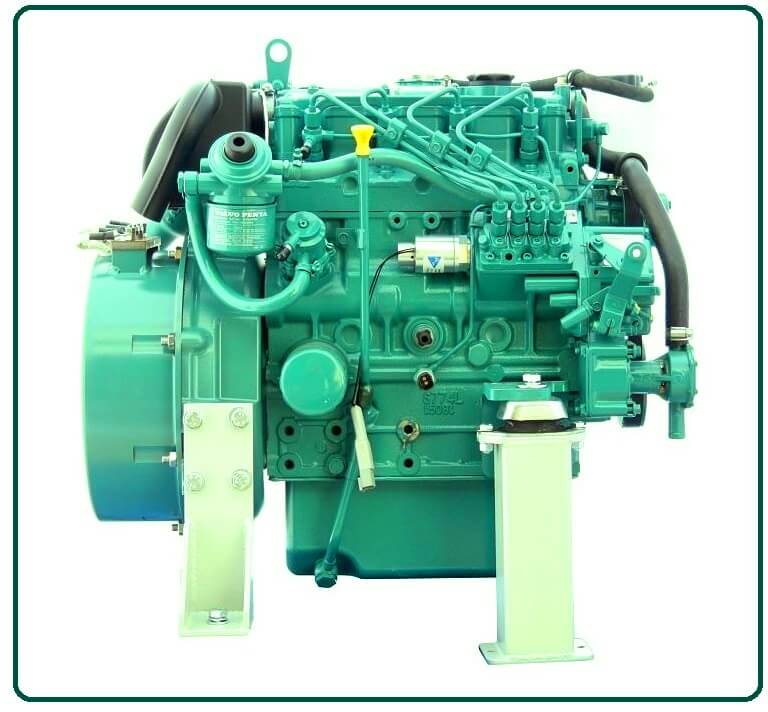 In the previous sections, we discussed what defines a DC generator and how it works. In this section, we are going to talk about the working principles of DC generators. As mentioned earlier, a DC generator is an energy converter that converts mechanical energy into electricity.

This change in energy form is based on the principle of electromagnetic induction, which means that wherever there are changes in magnetics fluxes associated with the conductor, an emf or an electromagnetic force is induced in it.

This inductance causes the flow of current in case the conductor circuits are closed. So, based on what we have said so far, the main requirements of DC generators are the magnetics field and the conductor. The conductor proceeds to cut off the magnetic fluxes.

Therefore, we can say that DC generators work on the principle of dynamically induced electromagnetic force. This is what Faraday’s law of electromagnetic induction states: When a current-carrying conductor is placed inside a varying magnetic field, an emf is induced in the conductor.

DC generator is an energy converter that converts mechanical energy into electricity. This change in energy form is based on the principle of electromagnetic induction, which means that wherever there are changes in the magnetic flux associated with the conductor, an emf or an electromagnetic force is induced in it.

If closed paths are provided to the conductor, the induced current will circulate within the closed path. In this generator, the field coil will generate an electromagnetic field as well as the armature conductor will be turned into the field.

Therefore, an electromagnetically induced electromotive force (EMF) will be generated within the armature conductors. The path of the induced currents is provided by Fleming’s right-hand rule.

The DC generators consist of the following parts –

Stators are sets of two magnets placed in such a way that opposite polarity faces each other. The purpose of the stators is to provide a magnetic field in the region where the coil rotates.

The rotor is a cylindrical laminated armature core with slots.

To produce a magnetic field, field coils are placed over the pole core. The field coils of all the poles are connected in series. When currents flow through them, the adjacents poles acquire opposite polarity.

The main function of poles is to support the field coil. This increases the cross-sectional area of ​​the magnetic circuit, resulting in a more uniform propagation of the magnetic flux.

Pole shoe is used to protect the field coil from falling & to increase the uniform dispersion of magnetic flux. The pole shoes are attached to the yoke.

A commutator is cylindrical in shape. Several wedge-shaped, rigidly drawn copper sections form a commutator. Functions of a Commutator:

For connecting fixed external circuits to rotating armature conductors by means of brushes and Conversion of alternating induced current into direct current.

Let us simplify the working and working principles of the DC generator for you. You have to note that if the generator is very small, for example, it is used for a shop, small workshop, cinema, or home, then the prime mover or mechanical energy supplier is a diesel engine.

Usually, the poles on the yoke are made of permanent magnets. This means that according to Faraday’s laws of electromagnetic induction, the armature conductors cut off the weak magnetic field established by the permanent magnet, and a small amount of emf is induced in the armature winding.

This induced electromagnetic force transmits a small amount of current through the field winding and strengthens the supplied magnetic flux and hence the induced EMF. Thus, due to the reinforcement of flux and emf, the generator provides the rated voltage.

The EMF equation for DC generators are expressed as,
Where,

What Is a DC Generator?

A direct-current (DC) generator is a rotating machine that supplies an electrical output with unidirectional voltage and current. The basic principles of operation are the same as those for synchronous generators.

What Is Self Excited DC Generator?

What Does a DC Generator Do?

A DC generator is an electrical machine whose main function is to convert mechanical energy into electricity. When the conductor slashes magnetic flux, an emf will be generated based on the electromagnetic induction principle of Faraday’s Laws.

What Are DC Generators Used For?

Construction of a DC Generator

It mainly consists of three main parts, i.e., magnetic field system, armature and commutator, and brush gear. The other parts of a DC Generator are a magnetic frame and yoke, pole core and pole shoes, field or exciting coils, armature core and windings, brushes, end housings, bearings, and shafts.

DC generators produce electrical power based on the principle of faraday’s law of electromagnetic induction. Based on this law, when a conductor moves in a magnetic field, the magnetic lines of force are cut. This leads to an electromagnetic force induction in the conductor.

Parts of the DC Generator