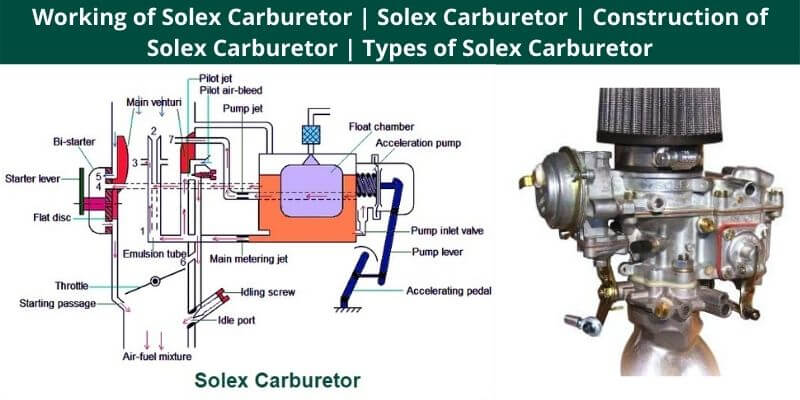 What Is Solex Carburetor? 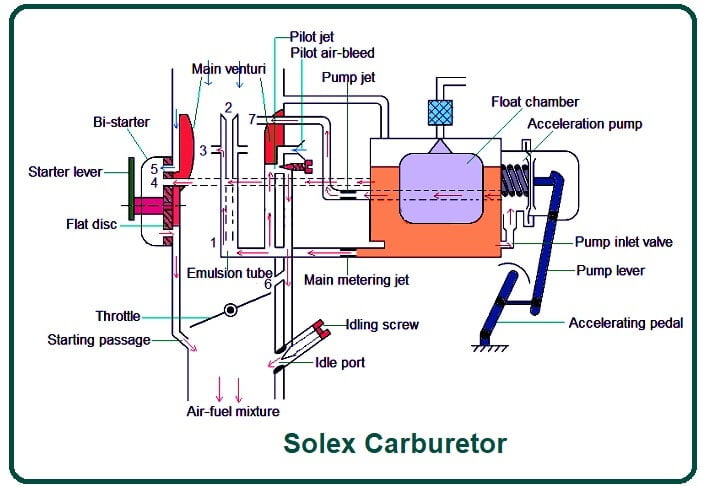 This Solex carburetor can provide a rich mixing engine start and a lean mixture when traveling at an economical speed with the vehicle. It can also provide different blends for different situations such as engine idling, low-speed operation, acceleration, etc. 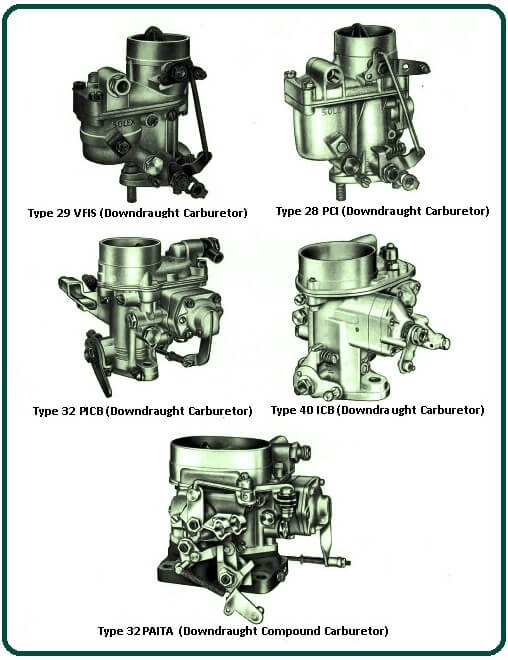 The pilot jet is used during the idle or no-loads condition. It has a pilot bleed orifice that allows the pilot jet to the air to form an air-fuel mixture. Near the end of the idle position pipeline, there is an idol screw used to control the amount of air-fuel mixture to pass into the engine cylinder.

The starting passage gets its fuel from the starting circuit or by the starter. These starting circuits are used to supply the air-fuel mixture during the initial time. This initial circuit consists of a flat disc with holes of different radius used to control the amount of fuel supply during starting.

#1. Working at the Time of Starting

The main function of the by-starter is to compensate for the problem encountered while starting the engine, especially in the winter season.

This gives the engine a rich mix at the time of starting. The ratio of a rich mixture of air and fuel is 11: 1, where 11 parts are air and 1 part is fuel. Typically the fuel ratio expected by the engine is 15: 1, but it requires a ratio of 11: 1 to start at the time of starting. This bi-starter has a flat disc and has holes of different diameters.

The starter petrol jet & starter air jet are connected near the hole in the disc, and the air-fuel mixture reaches the engine in suction stroke through the various holes in the starter disc.

Through these holes, the fuel & air pass from the Bi-Starter to the engine. This disc can be manually rotated using a starter lever so that it can be adjusted as per fuel and air requirements. For example, a larger hole in the disc would be used in winter because more fuel would be needed to start the engine in winter.

#2. Working During Idling & Slow Running of the Engine

Idling is a situation when the vehicle engine is running but not at Vehicle speed. This condition normally occurs when the red light turns off the vehicle, and the engine is powered on. In the idle state, there is no load on the engine, but all engine friction needs to be removed to keep the engines running.

The enriched mixture from the pilot jet will be sent directly to the engine by a tube located under the throttle valve.

A useless screw is present near the opening of the pilot jet to control the engine speed by controlling the amount of air-fuel mixture to the engine.

A less enriched air-fuel mixture will be provided by the by-pass arrangement so that the engine can run smoothly with full movement of the air-fuel mixture. The idle running position works at a speed of 0 to 30 (KMPH), and after that, it stops automatically.

The Solex carburetor is classified according to the direction of flow through the carburetor.

According to the layout of the inductions system

#1. The Direction of Air Flow

If you want to replaces an old carburetor with a new one, this is easily done by determining the flange type of the carburetor. In modern vehicles, downdraught carburetor is commonly used, as it is easily accessible from all sides.

#2. The Number of Carburetor

Typically, this is determined by the type of engine, whether one or more carburetors are used. Typically, in sports cars & racing cars, more than one carburetor is used. The purpose of using multiples carburetors is to reduce the length of the induction manifold. And most importantly, reducing bends that impede the free passage of the air–fuel mixture.