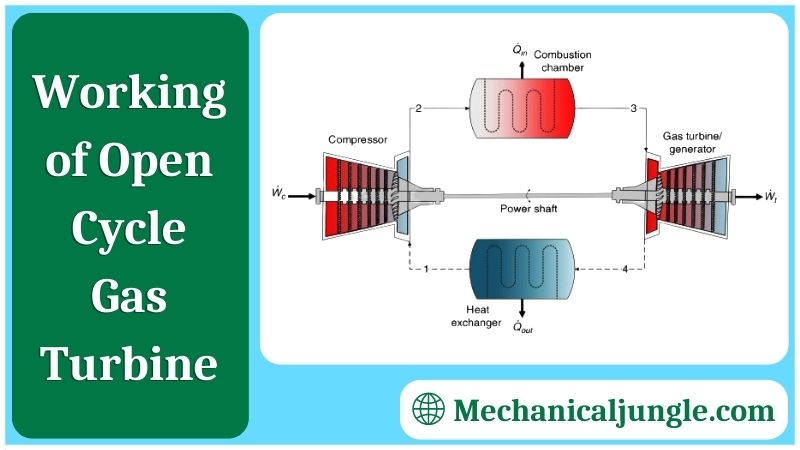 What Is the Open Cycle Gas Turbine? 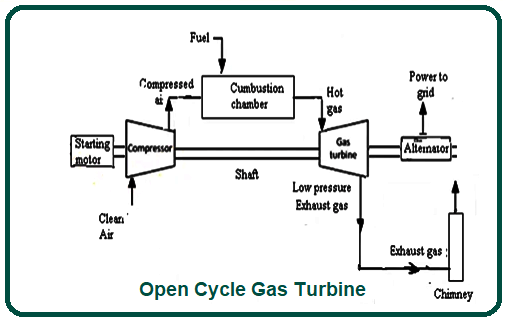 Open-cycle gas turbines can be defined as the turbine plant that is fired using liquid fuel to rotate the generator to produce electricity. Residual heat can be worn into the environment at 550o Celsius. The generator and turbine are attached to reduce noise levels and occupy an approximate area such as 75 m X 25 m for each unit. The height of the exhaust stacks can be approximately 30 meters through the intake structure at 20 m height.

The major components used in open cycle gas turbines include a compressor, combustion chamber, turbine, control, and start-up. A compressor uses air from the environment and lowers it to several stages within the compressor. Liquid fuel can be supplied to combustion chambers, where the chamber contains compressed air. After that, the mixture of both air & fuel can be ignited to produce gas with high velocity.

This gas can be supplied by using the blades of the turbine blades to turn the shaft which is connected to the rotor within the generator. Rotations of the rotor can be done within a stator to generate electricity. After that, this power can be supplied through a network of high voltage wherever required.

Gas turbines can be classified based on three main phenomena such as the process of combustion, the working of the material path, and the action of the combustion gases within the turbine. 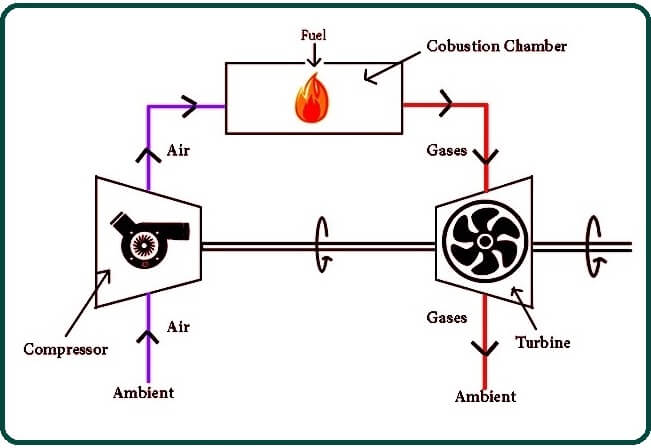 It is assumed that the entropy remains constants, no heat is transferred during this process, but the temperature will increase due to compressions from T1 to T2.

From 2 to 3, the compressed air from the compressor will enter the burner. In the burner, the temperature will increase, & the volume will also increase from V2 to V3 due to expansion due to heating.

This process will be a continuous pressure process. The fuel will enter the chamber from above and mix with the air before burning. After burning, the temperature will rise and expand.

#4. Gas Released into the Atmosphere

From 3 to 4, the air from the turbine will be released into the atmosphere. Also, air will be drawn from the atmosphere to the compressor, and the whole cycle will repeat again.

In the P – V diagram, the pressure (P) will remain constant, and the volume (V) will decrease from V3 to V4.

The compressor is used to compress the air. Most common axial flow compressors are used in an open cycle gas turbine.

After passing through the compressor, air enters the burner or A. Combustion chamber. In this burner, a constant pressure process will occur. The pressure will be constant, but the temperature will rise.

The isentropic process will also be done in the turbine. When the hot gas from the combustion chamber reaches the turbine, it will expand into the turbine. As the gas expands, some work will be done by the gas, and then it will escape from the system.

The open cycle gas turbine diagrams are shown below. The working principle of OCGT is when fresh air enters the compressor at ambient temperature, where the temperature rises both as well as the temperature. High-force air can enter the combustion chamber, where liquid fuel can move at a constant force. High-temperature gas can enter the turbine, where it increases the ambient force and generates electricity.

The main features of an open-cycle gas turbine include the following.

The benefits of open-cycle gas turbines include the following.

Disadvantages of open-cycle gas turbines include the following.

Applications of the open-cycle gas turbines include the following.

What Is Open Cycle Gas Turbine?

Open-cycle gas turbine. Definition English: A gas turbine prime mover in which air is compressed in the compressor element, fuel is injected and burned in the combustor, and the hot products are expanded in the turbine element and exhausted into the atmosphere.

The open cycle gas turbine operates on the principle of drawing the fresh atmospheric air at ambient conditions into the compressor, where the air is compressed by a centrifugal or an axial flow compressor.

Gas turbines are composed of three main components: compressor, combustor, and power turbine. In the compressor section, the air is drawn in and compressed up to 30 times ambient pressure and directed to the combustor section, where fuel is introduced, ignited, and burned.