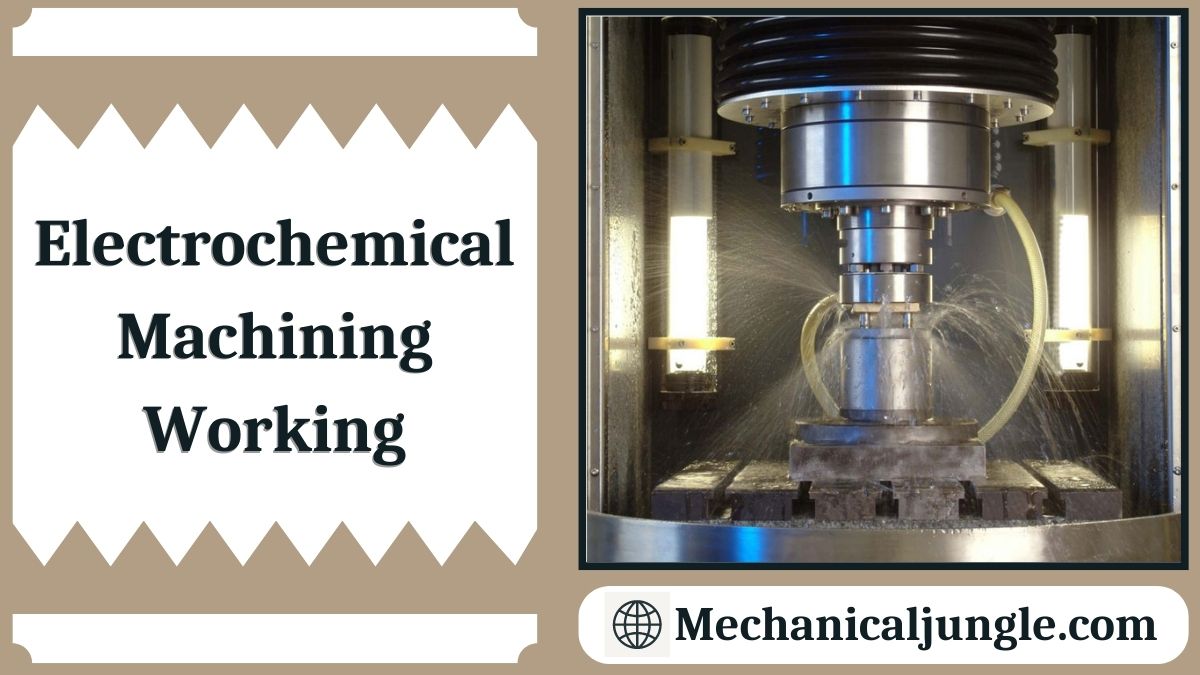 What Is Electrochemical Machining? 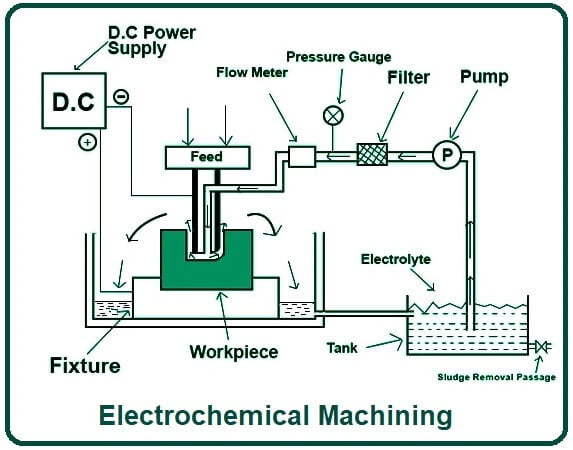 The Electrochemical machinings process is not affected by the strengths, rigidity, or rigidity of the workpiece material. Unlike traditional machining processes, we have to select tool material that is harder than workpiece material. Complex cavities can also be made into high-strength materials using the Electrochemical Machining process. This process works based on Faraday’s law of electrolysis.

The electrolytes are responsible for the creation of plasma that ultimately helps evaporate the material from the workpiece. The electrolyte is a conductor of electricity. 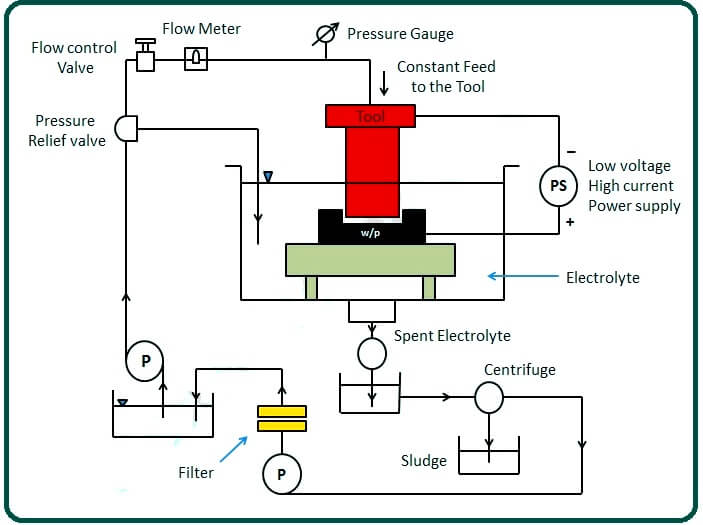 The electrolyte is pumped into the work area through a filter, pressure gauge, flow meter by the pump, and finally, it enters the work area by passage. When a power supply is given, an optimal gap between the tool and the workpiece remains because, due to faraday’s electrolysis rules, ions have started to displace from the workpiece and are trying to accumulate on the tool.

The electrolyte present between the instrument and the workpiece is pumped before the ions accumulate on the equipment. Then, the ions are also moving with the electrolyte without depositing them on the apparatus.

From above, the material removal mechanism is ion displacement, and because there is no disturbance in the equipment, the same equipment can be used to produce an infinite number of components.

The process of removing these materials from the workpiece continues until a cavity is created in the workpiece that is a replica of the tool used in this process.

So, in this way, the material is removed in the electrochemical machinings process.

Let us try to understand with the bits of help of an example:- Let us take an example of low carbon steel machining. Typically for machining of any iron alloy, the electrolyte taken is a neutral salt solution of sodium chloride.

When possible neutral salts (NaCl) and water (H2O) are applied, ionic separation occurs as shown below:

In addition, iron atoms will come out of the anode as positive ions:

When iron ions are mixed with an electrolyte, it will form iron chloride in association with chloride ions, and sodium ions also combine with hydroxyl ions to form sodium hydroxides.

Some iron ions are combined with hydroxyl ions to form iron hydroxides.

So the iron ions coming from the workpieces ( anode ) will combine with chloride ions & hydroxyl ions to form FeCl2 & Fe(OH)2, respectively. The FeCl2 & Fe(OH)2 will get precipitated in the form of sludge, & this sludge will be carried away with the electrolytes. Also, there are no coatings formed on the tool; only hydrogens gas evolves at the tool.

In this process, the workpieces are connected to the positives terminal and act as an anode, & the tool is connected to the negatives terminal and acts as the cathode. As very high currents are used, the equipment and workpiece are separated from the system to prevent any short-circuiting or leakage of current. The electrolyte is filtered & made to flow continuously through the workpiece. The pressure at which the electrolytes are pumped depends on the application or requirements of the process.

The electrolyte that can be used in this process are:-

Any electrolyte used must have the ability to establish electrical contact between the cathode and the anode. The difference between the tool and the workpiece is about 0.5 mm. 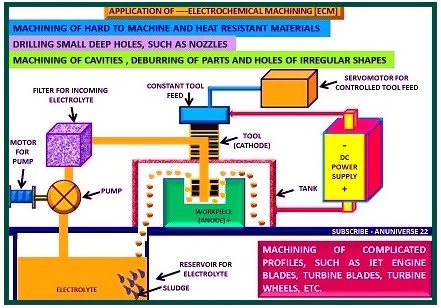 Table:- The table is used to place the workpiece on top of it.

Workpiece:- It is the object from which the material is to be removed. The workpiece is connected to the positive terminals of the DC power supply and acts as an anode.

Tool:- This device is connected to the negative terminal and acts as a cathode.

Feed unit:- This is used to continuously move the tool down towards the workpiece.

Electrolyte:- The electrolyte is used to establish the electrical relationship between the anode & the cathode so that positive & negative ions can flow from both of them.

The electrolytes are also used to remove the heat generated by the passage of current.

The most commonly used electrolytes in the ECM process are salt electrolytes such as sodium chloride & sodium nitrate.

Pump:- This pump is used to pump electrolytes the gap between the cathode and the anode.

Pressure Gauge:- Pressure gauges are used to control the pressure at which the electrolyte is supplied to the electrolytic machining system.

Flow Meter:- Flow meters are used to regulate the flow of electrolyte that is supplied to the system.

The benefits of electrochemical machining are as follows.

The disadvantages of Electrochemical machinings are as follows:-

The applications of Electrochemical Machinings are as follows:-

What Is Electrochemical Machining?

Electrochemical machining (ECM) is a method of removing metal by an electrochemical process. It is normally used for mass production and is used for working with extremely hard materials or materials that are difficult to machine using conventional methods.

Precision electrochemical machining (PECM), the most advanced form of it today, uses the principle of electrolysis to remove material from a workpiece at the ionic level. This allows us to shape hardened metal in complex shapes in high volume with consistent results. With PECM, intricate designs become a reality.