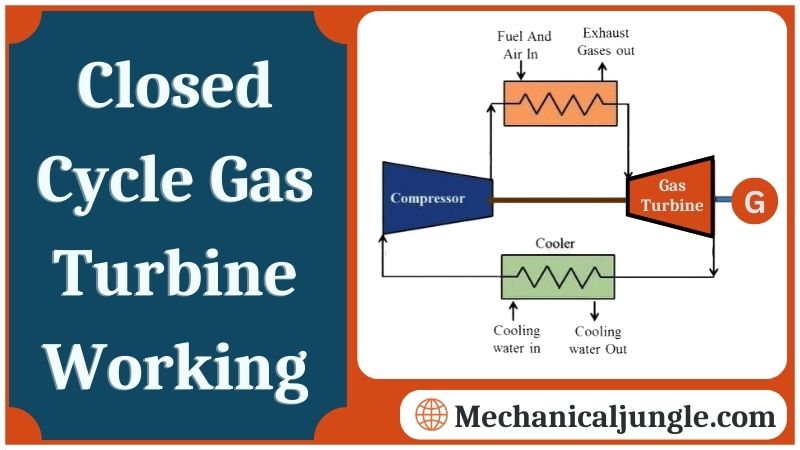 What Is a Closed-Cycle Gas Turbine? 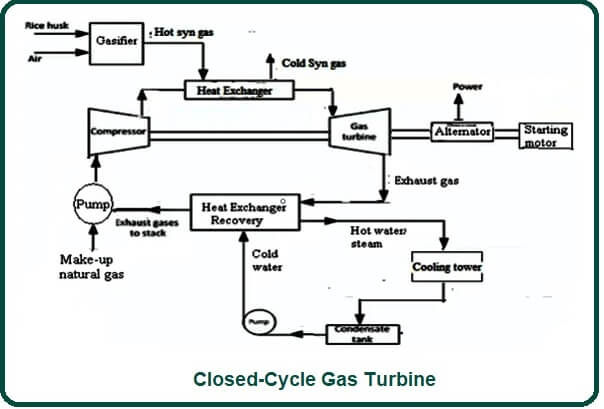 A closed-cycle gas turbine diagram is very simple and includes components such as a compressor, heat chamber, and gas turbine. The generator, compressor, and cooling chamber are powered by a gas turbine. Its picture is shown below. 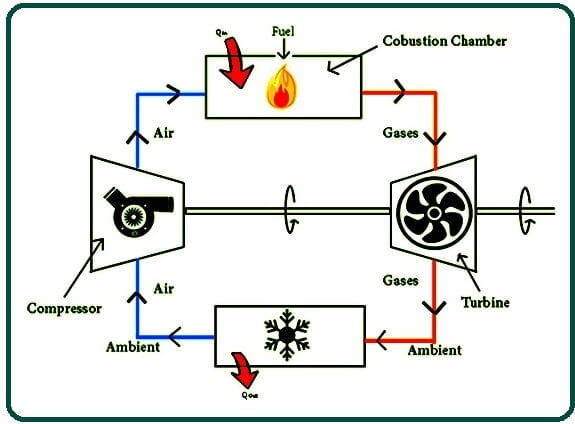 Let’s assume air is the working fluid. When the air enters the compressor, the air will be compressed. Due to compression, the pressure & temperature will increase, but the entropies will remain constant.

In the P-V diagram, the pressures (P) will increases from P1 to P2, & the volume will decreases from V1 to V2 due to compression.

In the T-S diagrams, the temperature (T) will increase from T1 to T2, and the entropy will remain constants as it is an isentropic process.

In the P-V diagrams, the pressure (P) will remain constant, & the volume will increase from V2 to V3.

This process will be the opposite of processes 1-2. The heated air from the burners or combustion chambers will reach the turbine, & the air will expand inside the turbine, & some work will be done due to expansion.

This process will be an isentropic process, & no heat will be transferred during this process. In this process, the volume will increase due to expansion, and pressure will decrease.

In the T-S diagrams, the temperature (T) will decrease from T3 to T4, and the entropy (S) will remain constant as it is an isentropic process.

This process is the opposite of processes 2-3. In this process, the hot air from the turbine is again cooled and brought to its initial state so that it can be used again.

In the P-V diagram, the pressures (P) will remain constant, & volume (V) will decrease from V4 to V1.

In the T-S diagrams, the temperature (T) will decrease from T4 to T1 due to cooling, and entropy (S) will also decrease from S4 to S1 due to heat rejection.

After passing through the compressor, air will enter the burner or A. Combustion chamber. In this burner, a constant pressure process will occur. The pressure will remain constant, but the temperature will increase as the heat increases, and the volume will also increase.

When the hot air from the combustion chambers will reach the turbine and strike the blade of the turbine, the air will expand, & the turbine will rotate. This expansion of air in the turbines will be an asynchronous process.

The turbines are connected to a generator through a coupling. As the turbine rotates, the generator will produce electricity using the work done by the turbine.

After working in the turbine, the air is sent to the cooler. The cooler will cool the air to return to its original or initial state. The cooling process in the cooler will be carried out under constant pressure.

The closed-cycle gas turbines working principle is based on the Bretton cycle or the Joule cycle. In this type of gas turbine, a compressor is used to compress the gas isotropically, and the resulting compressed gas flows into the heating chamber. A rotor-type compressor is preferred in this turbine.

An external source is used to heat the compressed air and then passes over the turbine blades. When the gas is flowing over the top of the turbine blade, it expands and is allowed to enter the cooling chamber and cool down. The gas is cooled using the circulation of water under constant pressure at its initial temperature.

The heat source, the type of fluid used to operate, the circulating air, the capacity of the turbine blades, the cost of maintenance and installation, etc., differentiate between open cycle and closed gas turbines. The main difference is the circulation of the working fluid.

What Is Closed Cycle Gas Turbine?

A closed-cycle gas turbine is a turbine that uses a gas (for example, air, nitrogen, helium, argon, etc.) as a working fluid as part of a closed thermodynamic system.

The promise of efficiency of over 50 percent (when operated in a binary cycle mode) makes the closed-cycle gas turbine an attractive power conversion system candidate as the goal of power production through a sustained fusion reaction in a confined plasma is realized.