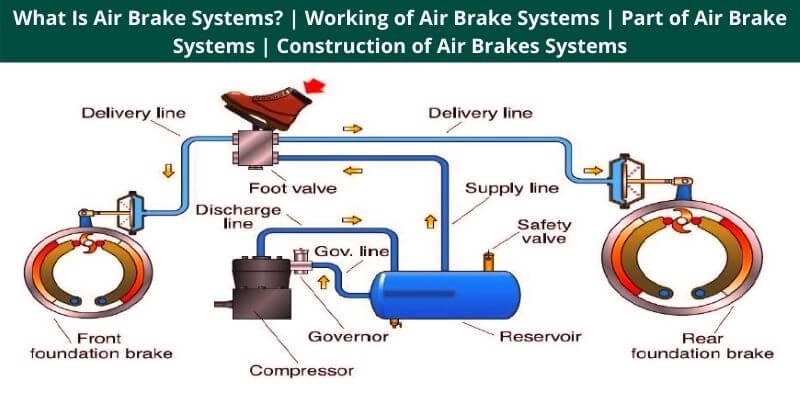 What Is Air Brake Systems?

Air brake systems are commonly used in heavy commercial vehicles and trucks. They require a heavy braking effort that can be applied by the driver’s leg alone. You apply compressed air pressure to operate the air brake instead of just the foot pressure acting against the flexible diaphragm in the brake chamber.

The first one is known as the disc brake, and the second one is the drum brake. These brakes are driven by humans or some other power source. According to the power source, these brakes can be classified into other types such as hydraulic brakes, air brakes, vacuum brakes, etc. When driving a heavy load vehicle, it is impossible for humans to generate braking force.

So another power system is used to generate the braking force that forces the braking pad and produces a frictional force between the brake and the tire that goes to stop the vehicle. The air brake system uses air to generate this force. This type of braking is similar to hydraulic brakes, requiring that these brakes use compressed air to apply brakes instead of hydraulic pressure. 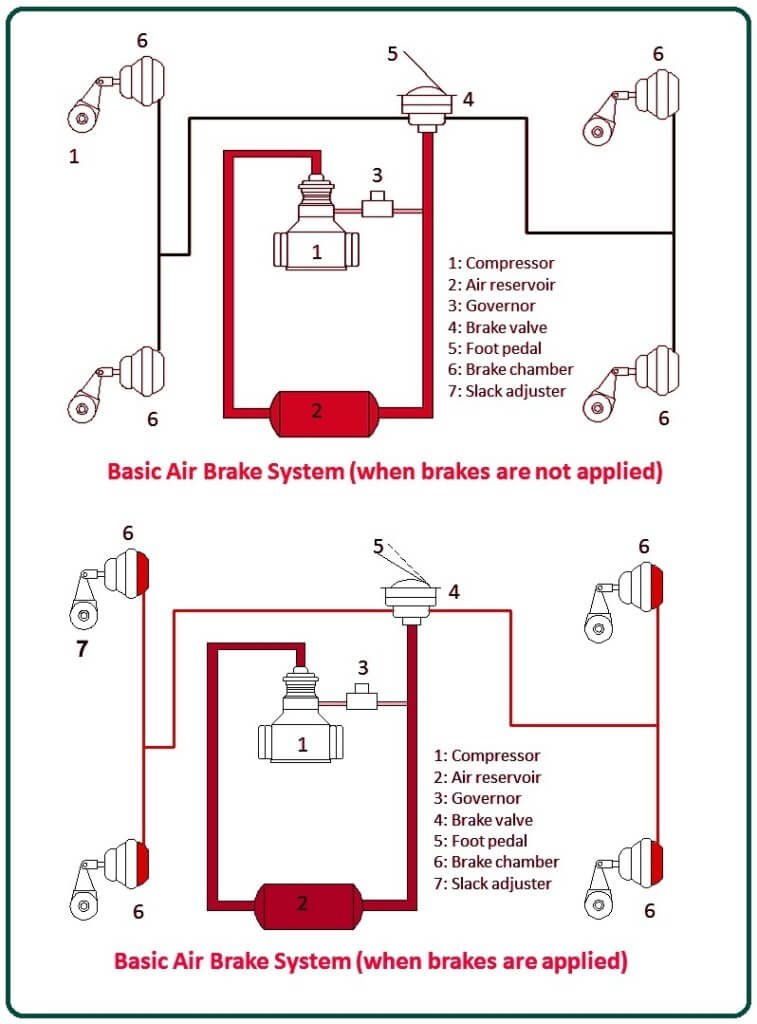 The system is equipped with an emergency mechanical brake, which can be used when the air supply fails the air brake system, known as the air-assisted hydraulic braking system.

When the driver of the vehicles presses the brake pedal to stop or stop the vehicle, the following procedures take place – When the driver starts the engine, the brake compressor starts because it is powered by the engine, which in turn starts compressing atmospheric air and the compressed air is sent to the compressed air reservoir with this optimal air through the compressor governor Which always contains some amount of air stored from the previous cycle.

With this friction contact between the brake pads and the rotation, drum line brakes are applied to the wheels to stop or stop the vehicle. When the driver presses the brake pedals, the outlet valve of the triple valves closes, and the inlet valve opens, which in turn passes the compressed air from the reservoir to pass through the brake lines of the system.

At the wheel end of the brake cylinder, brake drums are placed inside, which is a housing of mechanical actuators such as springs or slacks with brake pads at the outer end. Due to the piston speed due to the pressure applied by the compressed air, the mechanical actuator inside the brake drum expands, which pushes the brake pads in an outward direction to create frictionless contact with the rotating drum lines. 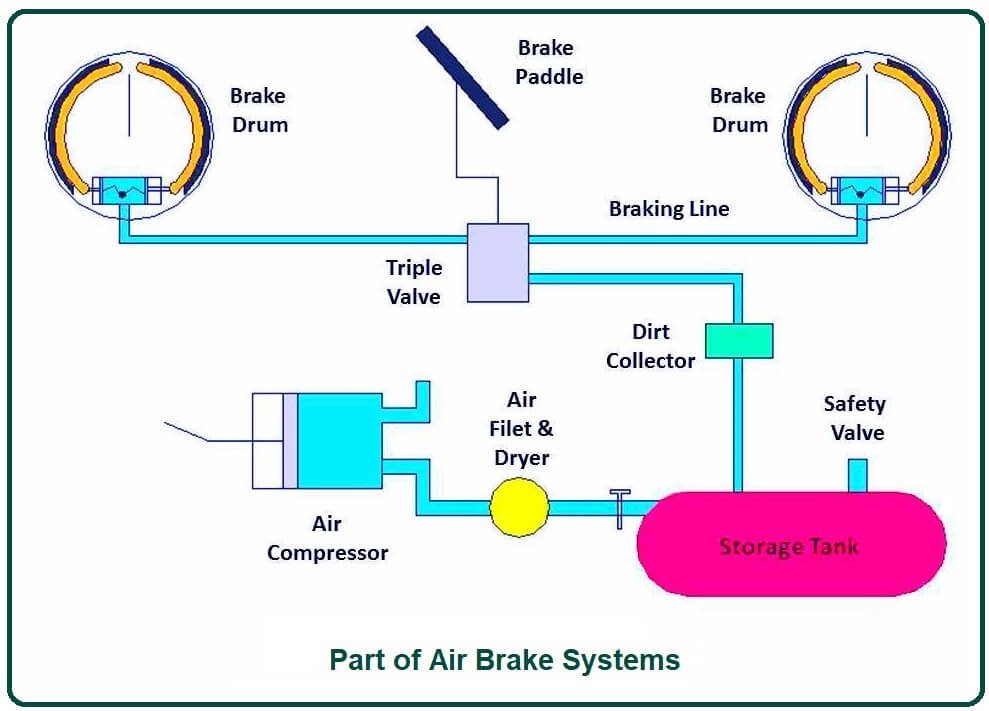 The air compressor is the main part of any air brake system that is driven by the engine using a belt drive. It compresses atmospheric air to the desired pressure and transfers it to the storage tank.

It stores compressed atmospheric air at high pressure. Also, an essential part of the air brake systems as compressed air is responsible for the entire operation. The brakes can be applied several times while the automobile is running, so the compressor is not capable of performing these tasks alone, which requires aerial storage.

A brake actuator is a piston-cylinder arrangement that is directly connected with the brake pedal. When the brake pedals are pressed, it creates pressure throughout the assembly.

The safety valve is a safety component that attaches to the air storage tank. This prevents the bursting of the tank due to excessive pressure because the air compressor works continuously and supplies the compressed air in the tank. Air is released by the safety valves when the air pressure reaches certain values.

A dirt collector is a small device used before the triplet valve. It is used to collect dirt particles separated by air filters.

The brake drum is the part that performs the brake. This is the last part of the brake assembly. It is mounted on automobile tires.

Braking lines are also known as supply lines. The transfers of compressed air from the reservoir to the brake drum are done by simply breaking the lines.

The triple brake is responsible for the entire operation of the air brake. Applying and releasing the brakes requires a continuously applied and releasing mechanism that is performed by the triple valve. When the brake pedals are pressed, it applies pressure while it releases the pressure immediately when the pedal is released.

Air filters and dryers are the two major components that are used before entering the air compressor. As the name suggests, air filters are used to remove dust mites from atmospheric air, while a dryer inlet removes moisture and humidity from the air.

It is necessary that only dry air enter the air compressor because the moisture content will cause the failure of the braking system due to the condensation of water particles. 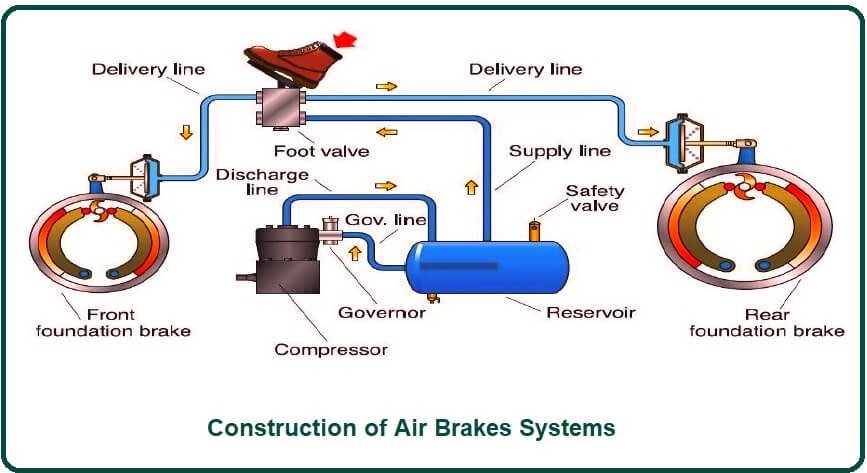 Air brake systems consist of a two-stage air compressor powered by a crankshaft or gearbox shafts. It takes air from the atmosphere, compressed it, & sends it to the air reservoir through an un-loader valve. Where the reservoir pressure reaches the maximum degree, the unloader valve opens.

The compressed air is then directed directly into the atmosphere. Each of the four wheels fitted with brake chambers has a diaphragm, and air pressure is applied and pushed. This force operates the cam actuating lever and applies the brakes.

Each of the brake chambers is attached to the brake pedal, and the air filter is also fitted between the brake valve and the reservoir.

As shown in the figure, compressed air (about 700 kPa) is used in the air brake to activate the brake mechanism. The figure shows the completes layout of the air brake systems. It consists of an air filter, unloading valve, air compressor, air reservoir, brake valve, and 4 number brake chamber.

The compressors take atmospheric air through the air filter & compress the air. This air is stored under pressure in air reservoirs. From this reservoir, air travels to the various goods of the vehicle, which operate on compressed air.

A portion of the air goes into the brake valve. The brake valve is controlled by a driver who controls the intensities of braking according to an emergency.

Pedal Depressed:- When the brake pedals are depressed, compressed air from a reservoir is transmitted uniformly in all directions to the brake chambers throughs the brake valve through a pipe that applies the brake.

Pedal Released:- When the drivers release the brake pedals, the master cylinder returns to its original position due to the piston return spring, and the pressure is dropped. It releases brake shoes from the brake drum: the original position and the brakes are released.