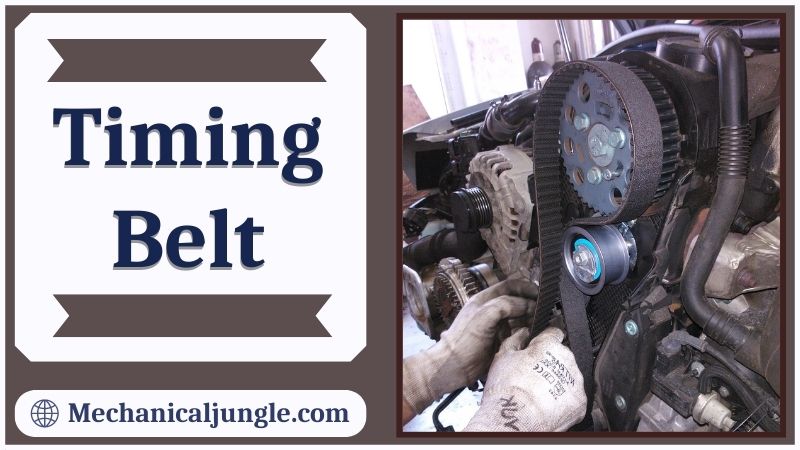 What Is Timing Belt? 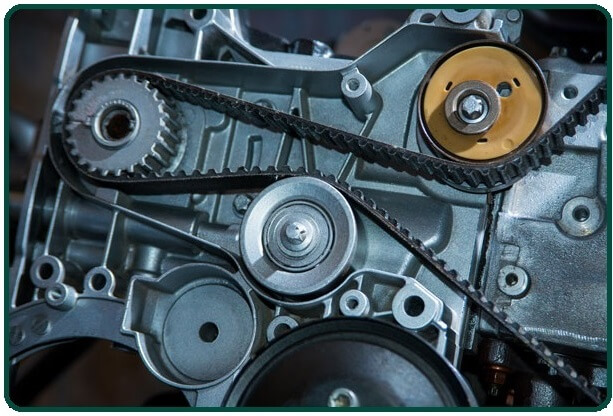 The timing belts are a part of your car’s internal combustion engines. It spins around the end of the various shafts in the car to transfer the rotational energy moving in one direction to eventually turns the wheels.

It is made of synthetics rubbers & looks like a giant elastic band but is usually black in color. It has several teeth on the inner surface of the belt that is used to increase its grip on the heads of various shafts within the engine.

Without these teeth, the belt could come off at any moment and damage your engine, either by getting stuck on another moving part or allowing two moving parts to come into contact when they shouldn’t. The timing belt is the important link between the camshaft and the crankshaft.

The crankshaft is responsible for converting the vertical energy generated by the motion of the pistons into rotational energy to drive the wheels. The camshafts are responsible for opening & closing valves to allow air in and out of your car’s engine.

If the timing belt was not there, or if it were to break suddenly, the piston and valve could collide, causing significant internal damage to your vehicle. That’s why it’s so important to monitor the condition of your car’s timing belt and make sure you replace it before it breaks.

We hope you take your car to the timing belt service store, but if you only look around under the hoods, you need to be sure. Don’t start grabbing random parts under the hood, especially after you’ve finished driving. The engine and engine parts may overheat. Do not wear loses clothing or dangling jewelry while working under the hood.

In addition to damages your jewelry, they can get caught in rotating belts or devices and cause serious injury. It’s a goods idea to wear gloves & wear eye protection, especially when working on older cars. You never know when something might break & splatter.

How Much Is a Timing Belt? 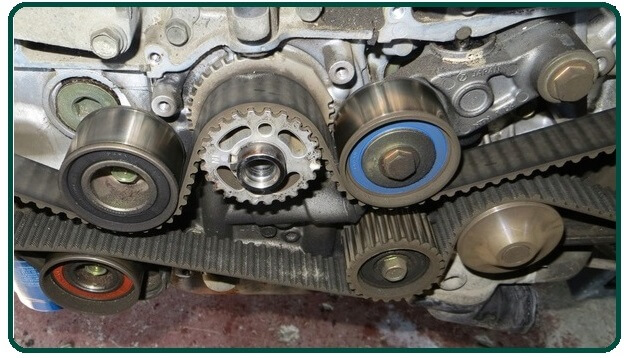 When timing or cam belts aren’t working properly, your vehicle’s valves won’t sync properly, which means the pistons could be damaged. If multiple parts are damaged as a result of a faulty timing belt, it can cost you up to more than $2,000.

If you haven’t suffered further damage and are able to bring your vehicle to a service center, Tyler and Longview drivers should still be prepared to pay upwards of $1,000 for a new timing belt, along with labor expenses. It is generally recommended that you replace your vehicle’s timing belt every 60,000 to 100,000 miles.

No matter whether you have a timing chain or a rubber belt under your hood, it’s easy to notice problems with either part. Take a look at the following warning signs, and if you know your car is experiencing these problems, schedule service at Peters Chevrolet Buick Chrysler Jeep Dodge Ram Fiat’s service center in Longview, just a short drive from Marshall Is at a distance of. Here are the problems with the timing belt that you may want to pay attention to:

There are a few obvious signs you can look out for to let you know that you have problems with your timing belt and it need to be replaced soon.

The sound of your car is one of the best ways to diagnose a problem with your vehicle. You need to be aware of how your engine sounds when operating under normal conditions, so when you hear a sound you don’t expect to come from under the hood, you need to pay attention to it.

If it’s a problem with your timing belts, you’ll hear a constant, repetitive ticking sound coming from under the hood. It’s as if someone is spinning the roulette wheel too fast. These can be the results of problems with the belt teeth starting to thin or breakage when rotating between the camshaft and crankshaft gears.

When the belt starts to wear out enough, the timing of the camshaft and crankshaft will no longer be in sync the way they are supposed to. This can mean that your fuel & air mixture is being injected into the chamber at the wrong time, & the combustion reaction will be out of sync with the rest of the engines, causing a misfire in that chamber.

Cylinders open at the wrong time because it’s no longer in sync with the pistons, and you’re going to lose a proportional amount of power depending on how many cylinders you have in your engine. This means that if you have a 4-cylinder engine, that misfire is reducing your engine’s overall power at that stroke by 25%. If you let it run for too long, you’re going to end up with a serious engine failure at some point.

This is a possible side effect if your timing belt is completely broken, but you are not driving the car at the moment. Perhaps it broke the moment you tried to start your car because of the pressure on the belt. This will ensure that the engine is actually unable to turn over and that you cannot start your vehicle. You will start the starter motor, but the engine itself will not start.

While this is a bad situation, it would be much better to break the belt while the vehicle is actually in motion, as there is going to be potential damage due to the crankshaft being turned even if it is no longer in sync with the camshaft.

If there are problems with your timing belt, there may be an oil leak from the front of your motor. This could be the result of your timing belt teeth cracking and falling into the oil pans below. They can clog the oil pan & prevent the oil from spreading properly throughout your vehicle.

It can also end up resulting in your engine overheating & causing some serious damage. Oil may also leak from the timing belt’s cover if the gasket between the engine block and the timing cover has worn out.

This is many different reasons why you might be experiencing some rough slack when sitting in your vehicle, but surely your timing belt problem is one of them. This happens when the teeth become loose, & they become stuck in gear, causing the car to jerk and vibrate, even when you are sitting still in the vehicle.

In addition to leaking oil, you may have a problem with oil pressure when the teeth break through the inside of the timing belt to get stuck in the oil pan. This prevents the oil from circulating the way it is supposed to, reducing overall oil pressure & preventing it from circulating properly through engines.

The timing belt may seem like a fairly ordinary part of your engine but unfortunately, replacing it is by no mean an easy task. In fact, when you go to a mechanic’ to have your timing belt replaced, it could probably cost you anywhere from $500 to $2,000, depending on the make, model, and year of your vehicle.

The reason for this is to reach out to your little ones, but it is not an easy task at all. This is one of the more complex procedures that qualify as routine maintenance for your vehicle and will take a long time to complete. Replacing a timing belt by a mechanic will take about 3 or 4 hours, depending on the model of your vehicle, and if you check at AutoZone, a timing belt can cost anywhere from $100 to $300.

The large range and cost of replacing a timing belt can’t really be narrowed down much more than that, depending on a number of factors. As you have seen, the cost of repairs can vary greatly, even among mechanics in the same city.

They are also going to be vastly different from one side of the country to the other, so it is difficult to get an accurate figure for this type of job. Also, replacing the timing belt in a more generic vehicle is going to be cheaper if you roll over to your mechanic with a McLaren F1.

Can I Replace My Own Timing Belt?

Technically speaking, you can do any auto repairs on your own if you are confident in your abilities and have all the tools to do it. That said, replacing the timing belts in your car is definitely a more advanced level of repair and definitely not the kind of thing you want to try to do on your own if you have any problem with your car’s hood. Not a lot of working experience is below.

If you’ve already done some repairs on your own, and you’re pretty confident you know what you’re doing, then you can always give it a try if you want to, but we’re definitely a fan of some people.

Recommend following closely along; you can check out some videos made on the internet or at least by mechanics who have youtube channels that can walk you step by step through the process so you can actually watch. Find out what you need to do and if you’re unsure about a step along the way.

These videos make doing home auto repair a lot easier because it’s like having a mechanic on call to show you what to do. In general, we would recommend that you do not attempt to do this task yourself, as there is a level of complexity involved.

He wanted to take it by himself; just be aware that if something goes wrong, it can cause some serious damage to your engines in the long run.

Timing belts weres introduced to vehicles a few decades ago to replace timing chains as a more cost-effective method of doing the same thing. Ironically, many cars these days is actually replacing the timing belt with a re-timing chain.

Huh. Even though it is not a particularly complex part of your engine, it is also incredibly important to the overall functioning of the vehicle. You need to make sure you are keeping your timing belts on the road with maintenance to prevent some catastrophic engine failures.

If you let it run for too long and damage your engine, what could cost you $500 to $700 to repair right now. If you notice any signs of a bad timing belt, make sure you get it fixed as soon as possible.

What Is the Cost to Replace a Timing Belt?

The belts themselves aren’t that expensive. The real cost is in the labor because a lot of parts need to be disassembled to get to the belt. Shopping around to get a few quotes is your best bet to get the best deal, but you can expect to pay anywhere from $367 to $585.

What Is Timing Belt?

A vehicle’s timing belt (or cambelt) is extremely important for keeping internal combustion engines running. The job of the timing belt is to harmonize crankshaft and camshaft rotation, and if both are synced up properly, then your vehicle’s pistons and valves will operate correctly.

What Does a Timing Belt Do?

Can I Replace My Own Timing Belt

But if you are and you enjoy doing your own repairs or restorations, then it’s something you can do yourself and save on some big repair bills in the process. We’ll walk you through the process of replacing a timing belt and water pump step by step, starting with the tools you’ll need.