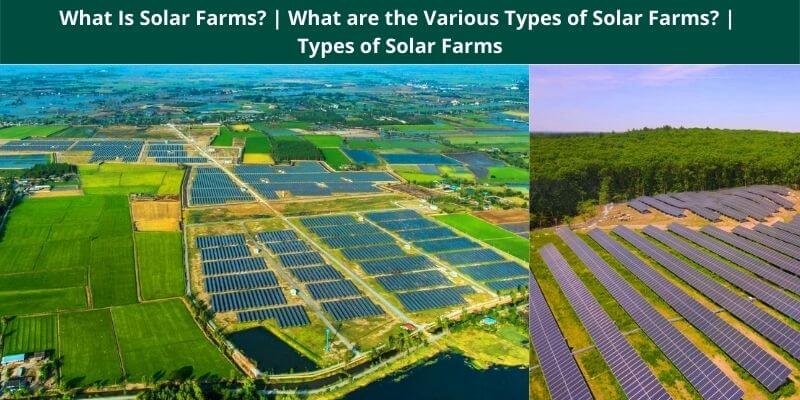 What Is Solar Farms? Solar farms, also known as the solar park or solar field, are large areas of land containing several acres of interconnected solar panels placed together to produce large amounts of solar power at the same time. Solar farms are designed for large-scale solar power generation that feeds directly into the grid, as opposed to individual solar panels that typically power a home or building.

Solar farms are actually large-scale solar installations where photovoltaic panels, referred to as solar panels or a means of collecting solar energy, are used to harvest the power of the sun.

They differ from rooftop solar systems and even commercial solar power systems in several important ways. The solar farm is also known as a solar park and solar power station. They operate as power plants, just like natural gas power plants or other sources of energy production that have generated electricity for consumers for the past century.

Solar farms, unlike residential & commercial systems, are decentralized and typically consist of ground-mounted solar panels installed over large areas. More often than not, solar farms provide electricity to the electric grid and are part of a utility’s energy mix, rather than providing electricity to a local end-user such as a homeowner or business.

What are the Various Types of Solar Farms?

Utilities solar farms, on the other hand, serve utility companies & all of their customers on their power lines as part of the energy mix.

How Do Solar Farms Work? 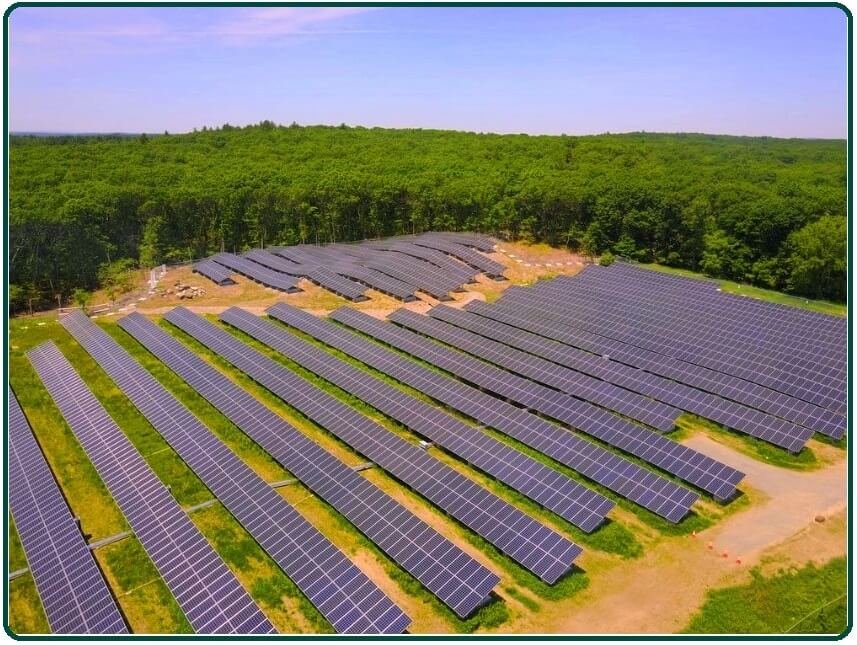 It is very easy to explain how solar panels work. Solar power panels make electricity from direct sunlight. When sunlight hits the panels, the semiconductors inside the solar panels are activated to generate usable electricity.

In a solar farm, several different solar panels are grouped together to generate a lot of electricity. Most often, the panels are mounted on a “single-axis tracking system.” Solar panels are attached to horizontal poles that run from north to south.

Throughout the day, panels rotate from east to the west to follow the sun. Solar farm equipment includes solar panels, racking, cables, inverters, transformers, and a power line or substation to deliver electricity to the electric transmission grid.

The U.S. Among the thousands of solar panel installations in the U.S., they can be divided into two types of solar farms based on size.

First and foremost, the phrase “utility-scales” can be a bit misleading. Technically, all solar power projects—whether it’s a few rooftop panels or an entire acre of them—are “on the grid,” providing electricity from solar power to a local utility company.

A solar power project is not really utility-scale when it is completely disconnected from the grid and not connected to a power line. This almost never happens. But for our purposes & most discussions of this nature, utility-scale solar farms refer to vast areas of land where solar panels extend beyond the horizon.

Such installations contain hundreds of thousands of solar panels that absorb energy from the sun, generate electric current, and distribute that power over high-voltage power lines. Electricity travels along with these powers lines to the power grid, eventually leading to your home.

Oh, and did we mention chariot energy is one of these? Yes! We are very excited about our Oberon solar power facility, which officially went online in June 2020. As a 180 megawatt (M.W.) utility-scale solar farm, it would supply enough solar power to power 30,000 homes annually.

Plus, we’ll be operating it for the next 25 to 30 years, so we have enough sunshine to move around.

These facilities, including ours, typically operate on powers purchase agreements, in which businesses agree to purchase a specific amount of electricity from the utility or generator.

They also work through other means, such as tax equity investing, a fancy term you can learn more about in our Business to Solar article. This is just one side of the coin of the solar farm! The other consists of thousands of small-scale farms that the industry refers to as community solar or solar gardens.

Community solar farms are small-scale solar facility that generates approximately 5 M.W. of electricity for the local community of homes and businesses. Powers are shared among all who participate in the program. Depending on the number of residents & the amount of production, residents can get a reduction in their electricity bill by investing in this solar project.

Here’s how it works:

This is possible with a technique called “Virtual Net Meterings.” Your retail energy company will credit your bills for the amount of electricity generated by your community solar farm in proportion to your home’s energy load.

Community solar also differs from utility-scale solar in that it is considered a distributed energy or distributed generation resource (DER). Electricity produced by a community solar farm is used to power homes within a close range.

Thus, if the grid goes down, they are less likely to lose power. In contrast, electricity created by utility-scale solar farms can travel for miles and miles until it reaches its destination, whether it’s your home or business. Ultimately, both have unique benefits that propel the solar industry forward!

What Should Be Considered to Establish Solar Farm?

We have listed down the top questions asked by people looking to install a solar farm on their property. Let us see what the things to keep in mind while starting a solar farm are.

#1. How Much Land Does Solar Farm Occupy?

According to some research, a 1 MW solar farm usually requires 6–8 acres, with all the equipment and the space between the panel rows. You have to note that with large solar projects, it’s not just about space for solar arrays.

The land is also needed to house associated equipment such as inverters, and space must be lefts between rows of solar panels for repair & maintenance use.

#2. How Long Does It Take to Establish Solar Farm?

Depending on the sizes of the solar project & the number of people working on it, the construction of solar farms can be completed within a few months.

However, sitting and allowing are much more complicated. Once the solar farm is complete and online, it requires very little maintenance & can be serviced about 3 to 4 times a year.

#3. How Many Moneys Can You Make out of Solar Farm?

In terms of revenues, you can earn $40,000 per year selling electricity from 1 MW solar farms. In the following line, we will explain how solars farm generates revenues.

Based on the national averages of four peak sun hours per day, we know that the average 1 MW of solar farm would be 1,460 MWh per year. This means that averages 1 MW solar farms can expect annual revenues of about $40,000 per year.

This is, of course, only an average figure and will vary depending on factors such as solar power generation in your area and the ongoing rate for solar production in the wholesale market.

#4. What Awaits Us in Future of Solars Farms?

Going forward, solar community projects, utility-scale solar projects, and rooftop solar systems will all be part of renewable energy solutions that provide clean energy around the world and replace fossil fuel powers. Large-scale solars will continue to get cheaper as developers of solar farms find more ways to reduce financing costs & equipment costs continue to drop. Expect to see many more solar farms & even larger farms in the near future.

How Much Does a Solar Farm Cost?

While the per-watt cost of building a solar farm is lower than residential solar power, the potential savings for an individual is not nearly as highs. Subscribing to a community solar farm will typically save you around 5-15 percent of your electricity bill, whereas with rooftop solar, once you pay for your system, you’ll be generating electricity for free! Compared to a residential solar panel setup, it is much cheaper to build a solar farm on a dollar per watt basis, between $0.80 & $1.30 per watt, rather than the $2.76 per watts average cost of a residential installation.

Depending on the size of the installation, the cost of a solar farm can range from $800,000 to more than $1.3 million – significantly higher than the $20,474 average cost of a residential installation. However, utility-scale solar panel farms will typically be at least one megawatt (MW), a power plant capable of supplying approximately 200 homes.