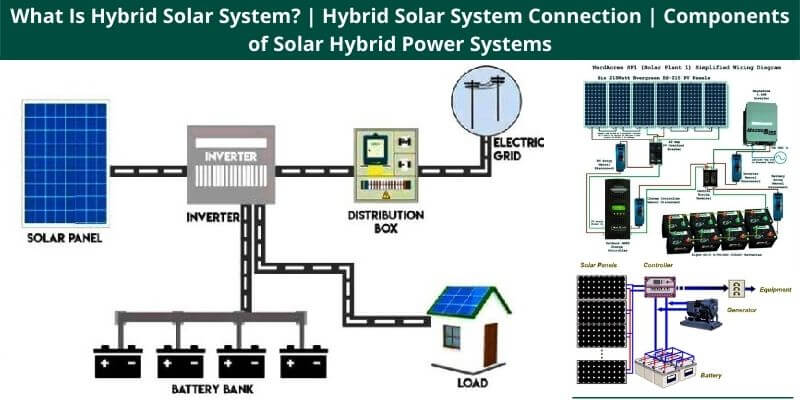 What Is Hybrid Solar System? 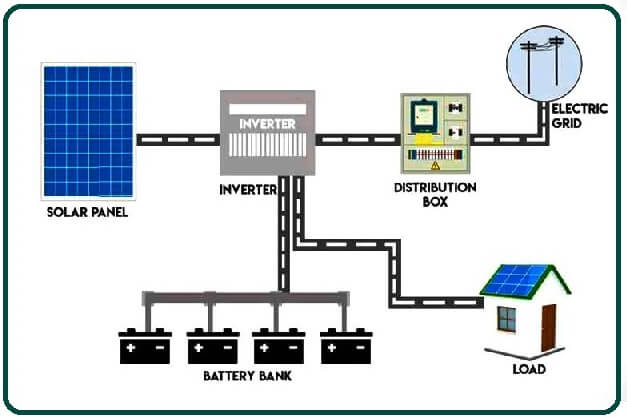 After installing solar panels, energy generated from them needs to be converted into electricity for your home. This is a few ways to do this; you can stay connected to the grids, go completely off-grid, or have hybrid systems. Hybrid systems are when your solar panels are connected to the grid’s power lines and have a backup battery system to store the excess electricity.

The sun’s energy absorbed by solar panels goes through an inverter to create usable electricity. From there, the electricity goes to either your home, your battery, or the grid. The advantage of a hybrid solar system is that you will always have electricity in any case.

With a backup battery, the extra energy that your solar panel makeup but your home doesn’t use will be stored in this battery. Then, when the sun isn’t shining, this battery will power you through the night, during system blackouts or inclement weather.

After all those steps, if there is still energy left, that energy is sent to the grid. The hybrid solar system is a crossover between grid and off-grid solar systems. This gives the advantage of being connected to the utility grid at the same time and giving your home enough backup to power significant loads in the event of blackouts.

The basic idea behinds hybrids solars is that when the sun is shining, you generate electricity from your solar panels and store this power in a battery. Once your battery is fully charged, you will use the excess electricity from solar to power your home appliances, and if any more electricity is left, it will be exported to the utility grid.

The power stored in your battery will be used when your utility grid is turned off as a source of power backup. Hybrids solar systems give you all the benefits of a grid-tied system while providing power backups in the event of powers outages.

A Hybrid Solar System Consists of the Following Components: 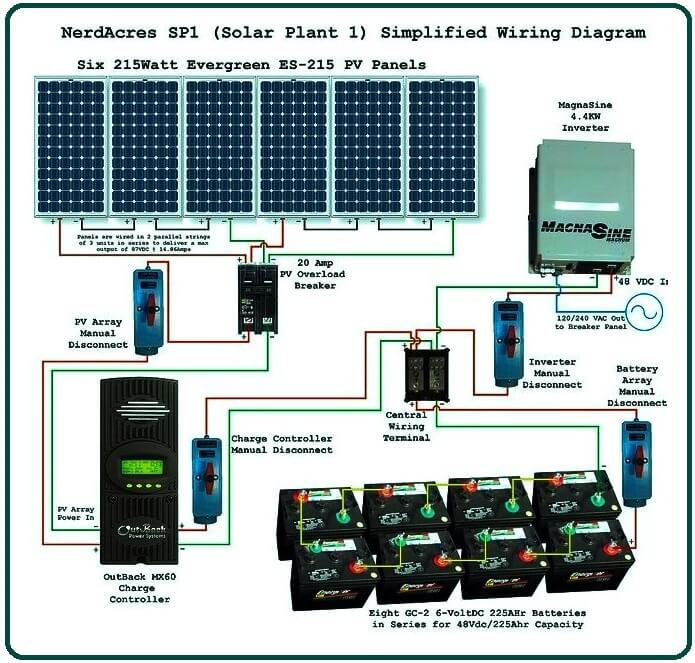 Hybrid Solar System Working When There Is Power Outage:

If there is a powers outage in the early morning or afternoon when the sun is shining and your solar system is generating electricity, your solar system will not shut down as it does in an on solar grid system, but it will turn itself off. Will disconnect from the grid & will continue. ,

The amount of electricity your home will need during a power outage will be drawn from the battery. Let me tell you one thing if your solar system is of 3 kW and you are running more than 3 kW of appliances on it at a time when the grid goes down, then your inverter will shut down.

A PV system consists of several PV modules and panels that form a complete photovoltaic power generating unit. Their panels absorb the sun’s rays & convert the received energy into electricity. In other words, they convert solar radiation energy into direct current.

It is a system that is responsible for monitoring the power demand as well as the rate of power generation at primary power sources to ascertain a consistent power output by simultaneously charging the supplementary power source as and when required.

Can you batteries or use them when appropriate. One of the advantages of using the EMS is that they can be configured based on various user preferences based on monitored system parameters.

The direct current produced by the PV systems is not so useful. Solar inverters are used to convert the DC output of a photovoltaic panel into a good 240v alternating current (AC) output.

Batteries store the excess generated energy for later use when there is not enough PV production or in cases where both the PV and the supplementary power source cannot produce enough energy to meet the power demand from the systems. 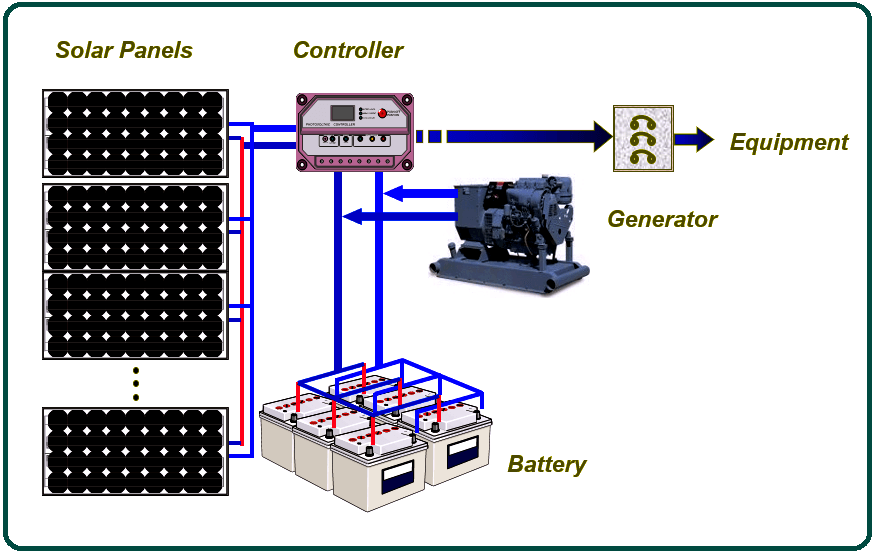 As previously mentioned, solar-diesel hybrid systems couple photovoltaics and diesel generators, also known as diesel gensets. Diesel gensets are intended for these systems for fluctuating solar power generation, and there will be battery storage as well as an energy management system to increase the overall efficiency of the system, which will allow for the ups and downs of solar power and diesel Genset operation.

Than monitors. Distance from its power output limit, so as to decide when to charge the battery or use it for continuous power generation. Instead of connecting the solar system to the power grid, the use of diesel gensets in a solar hybrid power system will most likely occur when the grid strength is poor, and there are frequent power outages.

For all hybrid power systems, there is one main energy supplier. For this case, the main power system can be either a diesel power generator or a solar PV. In the first scenario, the goals are to reduce fuel expenditure by adding additional energy from the photovoltaic systems.

In scenario second, which is the actual purpose of these posts, diesel gensets are intended to compensate for energy output fluctuations of solar PVs with batteries and an energy management system to optimize both fuel efficiency and power generation stability.

There are several benefits to consider for a solar-diesel hybrid power system. The excessive power output will be stored in batteries for later use or may even be sent to the power grid.

However, with proper selection & use of equipment, all energy can be used without being wasted or put back into the grid. The use of diesel gensets with batteries for these power systems ensures continuous and uninterrupted power generation, even if the PV generation is not sufficient or the grid fails.

In addition, these systems are certainly more environmentally friendly than systems that rely solely on fossil fuels for electricity generation due to their emphasis on the solar part of power generation and producing fewer pollutants such as carbon monoxide. , the way systems rely only on fossil fuels.

The other important types of solar hybrid power system are the solar PV-wind hybrid power system, in which the supplementary power source is wind. This is a really good combination as both solar and wind are among the renewable energy sources.

This means that these systems are inherently less volatile in terms of power output. Wind power systems and solar power systems individually are not as effective as their combination because there are times throughout the year when wind or solar power is not available as much as is needed.

It is clear that a portion of the power generation will be devoted to heating for any power system, but these systems will separate the heating portion from the power generation portion and are, therefore, more efficient than other power systems. The logic behind their design is quite fascinating. Well, you can expect your photovoltaic cells to reach 20% electrical efficiency, which means they can only convert the Sun’s radiation into electrical energy.

However, about 65% to 70% of that radiative energy of the Sun will be converted to heat, raising temperatures of the PV module. These hybrid systems are designed to absorb heat using components called PVT collectors to make better use of the solar spectrum.

Since these systems are designed to direct the heat absorbed from system surface areas towards heating purposes, where necessary, the surface temperature of the modules will be reduced, meaning their lifetime will be extended. Well, it certainly increases the overall efficiency of the system but will reduce the efficiency of the solar collector due to the low surface temperature.