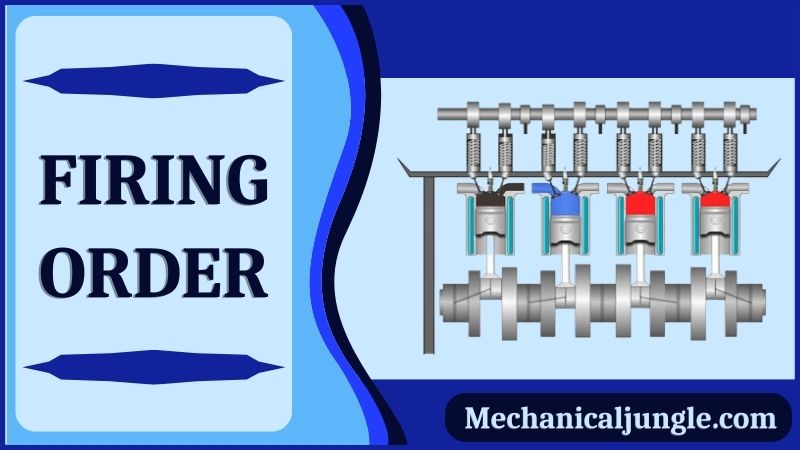 What Is Firing Order?

The firing sequence of internal combustion engines is the sequence of ignition for the cylinders in spark ignition, eg. For gasoline/petrol engines, the firing order corresponds to the order in which the spark plugs operate.

In diesel engines, the firing order corresponds to the order in which fuels are injected into each cylinder. Four-stroke engines must also time the valve openings relatives to the firing order, as the valves do not open & close on every stroke.

Firing order is the order of power distribution of each cylinder in a multi-cylinder reciprocating engine. This is achieved by placing the spark plugs in the correct sequence in a gasoline engine or by the sequence of fuels injection in types of diesel engines.

When designing engines, it is important to choose an appropriate firing order, to reduce vibration and to have a long engine fatigue life and user comfort, and to heavily influence crankshaft designs. The firing order of engines is the order in which electricity is incident to the different cylinders.

In inline engines, the firing order can vary somewhat, yet most of the order is arranged so that the firing of the cylinders is evenly distributed along with the crankshaft. Firing order affects the vibration, sound, and symmetry of the power output from the engine. Firing order greatly affects crankshaft design.

Why Do We Need Firing Order?

As we all know that the four-stroke engine we are using today works on an autocycle or diesel cycle, which includes suction, compression, power and exhaust, four strokes, or reciprocating.

This is accomplished in four movements of the piston, and when it comes to engines with more than one cylinder, the process becomes quite complex, hence the need for a pre-determined sequence of combustion or firing of the fuel like- When it comes to more than 1-piston the load on the crankshaft increases as all the pistons are connected to a single crankshaft and if proper firing order is not provided to the engine the crankshaft will likely fail.

The proper firing sequence of the engine provides maximum power, smooth running, and high life to the engine and also protects the engine from unwanted vibrations.

Of all the four-stroke suction, compression, power, and exhaust required to complete the engine’s cycle, the power stroke is the strongest and generates both mechanical or thermal stresses that can lead to engine failure; therefore, It is required for a multi-cylinder engine that the power stroke in any two adjacent cylinders must not occur at the same time, which is why the engine must have a pre-determined and proper firing order.

Improper firing order can affect engine and crankshaft balance due to uncontrolled stress generation resulting in harsh running, unwanted sound, and unwanted vibrations from the engine, which can suddenly break any component of the engine and is quite a dangerous operator or people around.

It is desirable that the power impulses be evenly spaced and balanced. If all cylinders are firing simultaneously, the power delivery will be very jerky, so the engine is set up for cylinder firing for smooth power delivery. If the piston moves in a certain rhythm, they must also get their spark in a certain rhythm, so the engine will run smoothly.

The optimum firing sequence of an engine ensures:-

To better understand the firing order of an engine, let us take a few examples of the various multi-cylinder engines used in today’s automobiles.

In the Tata Nano, a 2-cylinder inline engine is used even though it is more than a 1-cylinder engine; the firing order is not so complicated as it is quite clear when firing will take place in cylinder 1 or as compared to cylinder 2. Spark plug ignition will occur on the compression stroke, and the firing sequence will be 1-2.

Cars such as the Swift have 4 cylinders mounted in a straight line, with the firing order configured as 1-3-4-2, meaning all cylinders will fire or 1-3-4- According to 2, there will be spark plug ignition.

Sequences, it is found that in a 4-cylinder engine, a complete firing order gives 720 degrees of crankshaft rotation, which means that each power stroke by the individual pistons gives 180 degrees of rotation to the crankshaft.

#4. V-shape 6 Cylinder Engine of Honda Accord

In the line of high-end cars, the Honda Accord and Audi A-8, high-powered engines with multiple cylinders are used; in the Honda Accord, a 6-cylinder engine placed in a V-shape is used for proper and effective firing.

#5. The Flat-Six Cylinder Engine Used in the Porsche 911 GT3

In some cars likes Porsche 911, GT3 6- cylinders are placed in the opposite direction in the horizontal plane, i.e., and cylinders 1,2,3 are placed on the left, and cylinders 4,5,6 are arranged on the right, use is done. As in the V6 engine, all pistons are mounted on 6 crankpins placed every 60 degrees of the crankshaft.

The firing order of these types of engines is configured as 1-4-5-2-3-6, meaning that firing or spark ignition will occur every 120 degrees of crankshaft rotation.

The firings order of 2, 3, 4, and 6 cylinders in tabular form are given below:

What Is Firing Order?

The firing order of an internal combustion engine is the sequence of ignition for the cylinders. For this inline-4 engine, 1-3-4-2 could be a valid firing order.

The firing order is the sequence of power delivery of each cylinder in a multi-cylinder reciprocating engine. This is achieved by sparking the spark plugs in a gasoline engine in the correct order or by the sequence of fuel injection in a diesel engine.

It is desirable that the power impulses be evenly spaced and balanced. If all cylinders are firing simultaneously, the power delivery will be very jerky, so the engine is set up for cylinder firing for smooth power delivery.

Why Do We Need Firing Order?

The firing order in an engine is important because a correct firing order can cause minimum vibrations in the system. Minimum vibration in automobiles is desired as the ride can become smooth, and the driver and passengers won’t feel the vibrations being transmitted by the engine as it is very less.