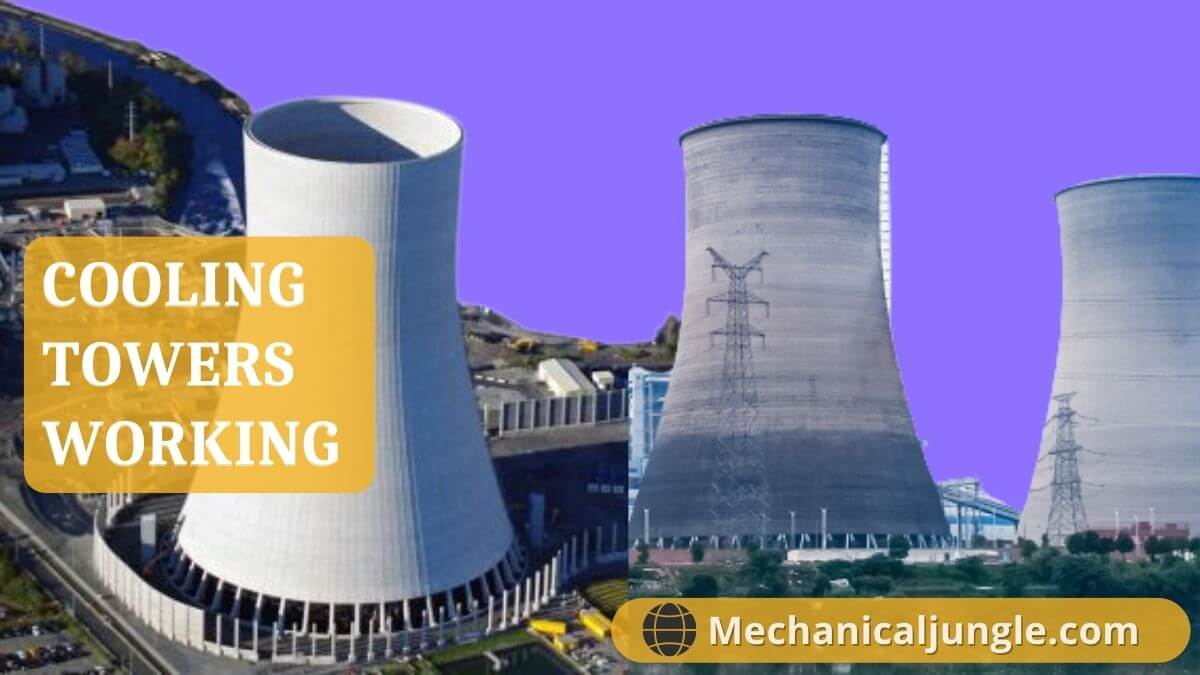 What Is Cooling Towers? 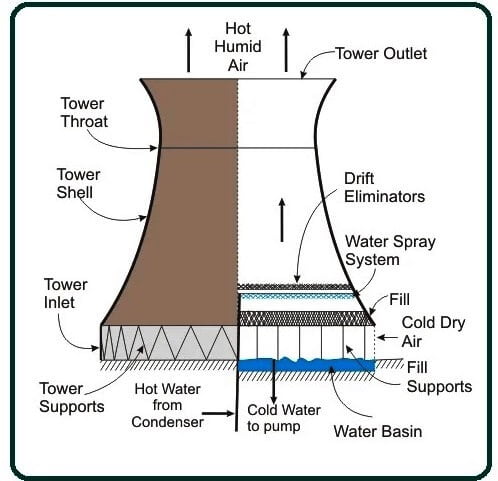 Water, which has been heated by an industrials process or an air conditioning condenser, is pumped through the pipe into the cooling tower. Water circulates through nozzles on the coast of a material called “fill,” which slows down the flow of water through the cooling tower & exposes as much water surface area as possibles for maximum air-to-water contact.

As the waters flow through the cooling tower, it is exposed to air, which is being pulled through the tower by an electric motor-driven fan. When water and air meet, a small amount of water evaporates, leading to a cooling action. The cooling waters are then pumped back into the condensers or process types of equipment, where it absorbs heat. It will then be pumped backs to the cooling towers once again to cool.

Cooling Towers Fundamentals provides a level of basic cooling tower knowledge and is a great resource for those wanting to learn more. Industrial cooling towers are an effective way of transporting unwanted heat from one place to another using water, where transport media is used in applications where cold water is in the temperature range of 70 ° F to 100 ° F. Must be a reliable source.

Cooling towers are commonly used for cool products, including injection molding, tools and die-cutting, food and beverage, chemicals, lasers, machine tools, semiconductors, and more in a multitude of applications. While there are different manufacturers using different designs, all cooling towers operate using the same principle of evaporative cooling. 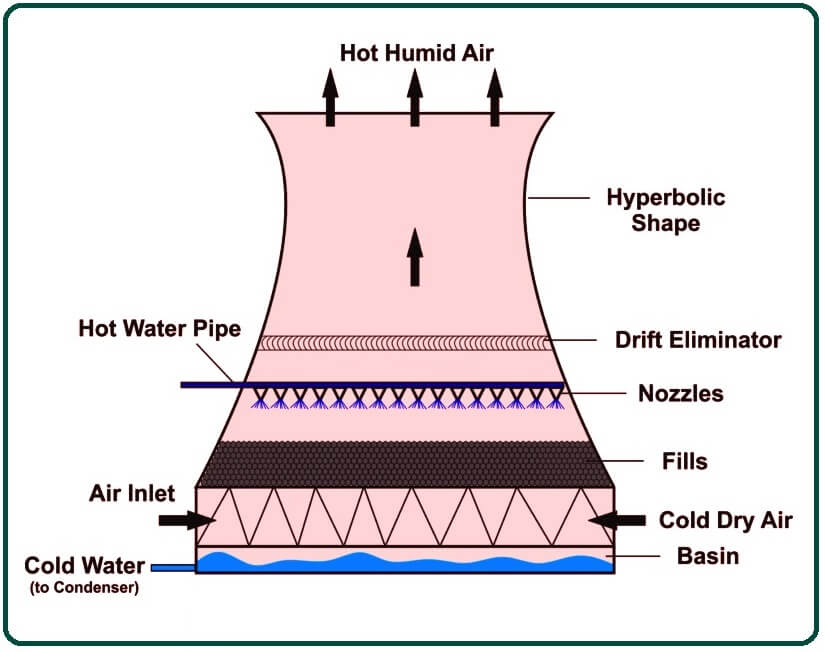 Hot water from power plants or industries circulates on the fils (heat exchanging surface) through nozzles connected to hot water pipes. Fills have a hexagonal cavity over them that allows the diffusing water to slowly move down. And the air from the bottom of the cooling tower moves upwards and fills.

When air and hot water come in contact with each other, air takes latent heat from the water and cools it. The air takes heat from the water, so it becomes hot, and due to this, it evaporates some water and cools the water further. As we all know that evaporation gives a cooling effect, i.e., where evaporation occurs on the surfaces from which evaporation is cooling. After cooling the hot water, the air moves upward with evaporated water.

Some of you may wonder why thises is going to end the drift, so I will tell you so this remover is reducing the water loss from the cooling tower. As the water is filled, it gets colder and colder, and finally, it gets collected in the basin.

And from the basin, the cooling water is circulated to the condenser of the power plant and industrial machinery for the purposes of re-cooling. The circulation of water inside and outside the cooling tower is done using centrifugal pumps. 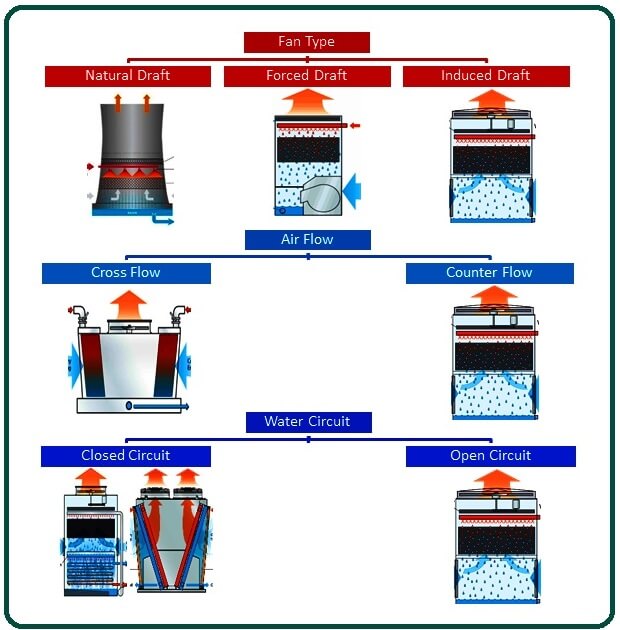 Cooling tower systems are often important for industrial processes. These elongated, open-ended, cylindrical structures are responsible for the cooling water generated by industrial or HVAC comfort cooling airflows. They are classified by the types of the draft (natural or mechanical) and the direction of airflow (counter or cross).

In this type of cooling tower, the fan is not used to circulate air, but here, it is used to enclose the hot air in the chimney, and this will cause the hot air and the surrounding air. A pressure difference will arise. These pressure differences cause air to enter the cooling tower. This requires a larger hyperbolic tower, so capital costs are higher, but operating costs are lower in the absence of an electric fan. There are two types of natural draft cooling towers, rectangular wooden towers S and reinforced concrete hyperbolic towers.

Air is forced through the structure by the fan, which transmits air through the tower. Common fans used in these towers include propeller fans and centrifugal fans. While mechanical draft towers are more effective than natural draft towers, as a result, they consume more power and cost. 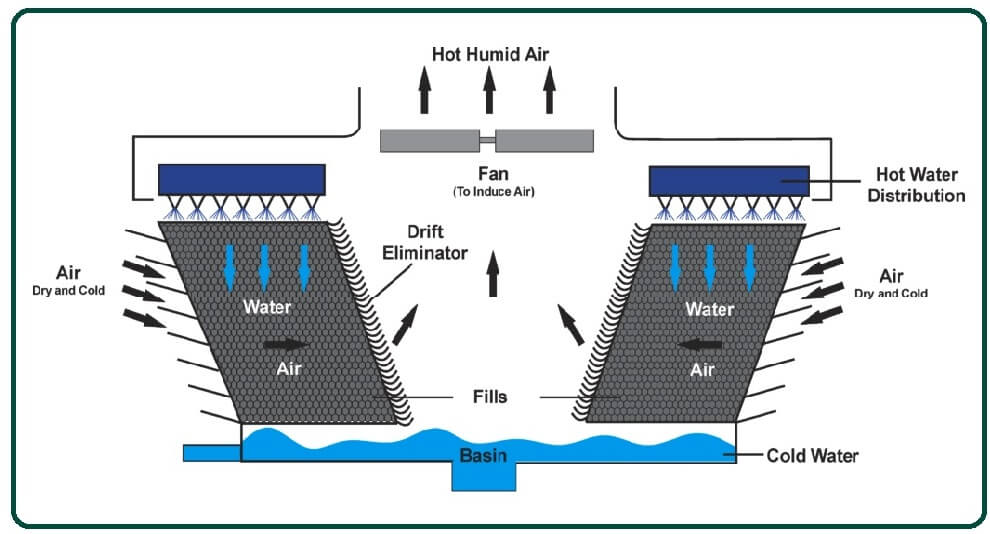 There is a design that allows air to flow horizontally through the filler and tower structure into an open plenum area. Hot water flows downstream from the distribution basins. However, fans and motor drives require weather-proofing against moisture, which can make freezing less efficient.

There is a design where the air moves upward and comes counter-current with a hot spring to cool the air. This allows maximum performance from each planning area and helps reduce pump requirements. In addition, counterflow cooling tower systems are less likely to freeze ice in cold weather and save energy in the long run. All Delta cooling towers retract from these advantages.

They are usually placed on top of a cooling tower with a fan, which vents hot air and draws out the entire air. Higher exit air velocities reduce the probability of re-circulation. Discarding stream In order to avoid the entry of water droplets into the air, the flow eliminator is used. Driven draft towers are more efficient because they use 30% to 75% less energy than forced draft designs. 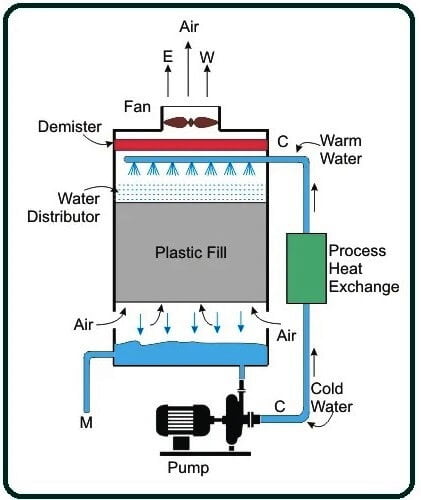 The basic working principle of cooling towers is to cool the hot water with the help of atmospheric air. However, it is widely used in various engineering fields and other refrigeration plants. The height of the cooling tower in the thermal power plant is about 9 feet or more from the ground.

Atmospheric air that is relatively quiet enters the lower part of the tower. Now the hot air in the cooling towers exposes atmospheric air, which reduces the temperature of the hot water by partial evaporation.

This cold water is collected in the pond at the base of the tower and pumped into the condenser for further use. Cooling towers operate on the principles of evaporative cooling. When the air comes in contact with hot water, it takes away the latent heat of the water and cools it.

Also, after taking heat from hot water, the air temperature rises, and it evaporates some of the water, and it cools water to a lower temperature.

Here, the different advantages of cooling towers are as follows

There are three main types of cooling towers that are defined by how water or air passes through them. These types include crossflow, counterflow, and hyperbolic. There are also two varieties classified solely on airflow, known as induced draft and passive draft cooling towers.

Cooling tower systems work by using water to extract waste heat from a system and ejecting it into the atmosphere primarily through evaporation. The three key components of a cooling system are the cooling tower, recirculating pump, and heat exchanger. Water first passes through a heat exchanger where it absorbs heat.

Induced draft towers have a large propeller fan at the top of the tower (discharge end) to draw air upward through the tower while warm condenser water spills down.

What Are Cooling Towers Used For?

Cooling towers are primarily used for heating, ventilation, air conditioning (HVAC), and industrial purposes. Cooling towers provide a cost-effective and energy-efficient operation of systems in need of cooling. More than 1,500 industrial facilities use large quantities of water to cool their plants 2.

What Is Cooling Tower?

A cooling tower is a specialized heat exchanger in which air and water are brought into direct contact with each other in order to reduce the water’s temperature.

In a crossflow cooling tower, the process water is pumped to the top of the tower into the hot water distribution basin. The distribution basin is out of the way of the airstream and is gravity fed. The only driving force behind the nozzles is the hydrostatic head of water above the nozzle itself.